The STG was a tank designed by Soviet engineer Gremyakin around 1952 to 1953. It came as a proposal to the Ministry of Defence of the USSR, which wanted a new medium tank, but with the armor and firepower of a heavy tank, and with the dimensions and mobility of a medium tank. Gremyakin’s proposal did not get far, and it is likely that it was never given any official name, with no names in the blueprints, which are all that remains. It is now commonly known as the STG (Abbrev. of romanized Russian, Sredniy Tank Gremyakin, Eng: Gremyakin’s Medium Tank).

On 20th May 1952, the Defence Ministry of the USSR held a meeting with the heads of the largest tank plants and the Marshal of Armored Forces, Semyon I. Bogdanov, on the topic of modernization and development of new tank projects. Shortly after, on 18th June, the decision to develop a new medium tank was made. The chairman at the GABTU (Main Directorate of Armored Forces), V.V. Orlovsky, held a meeting with N.A. Kucherenko, who was part of the leadership of the tank production department of the Ministry of Transport Engineering of the USSR, and sent the requirements to several factories, including:

It was meant to be superior to the T-54 in most categories, from firepower to range, to armor and speed. The T-54 itself was equipped with a 100 mm D-10T gun, very competent for the time. Armor was between 100 mm and 120 mm on the front hull (depending on the production model). The engine was a 520 hp ‘V-54’ water-cooled diesel engine.

The requirements were to be:

Several proposals were presented, one of the most popular being the Object 907 medium tank, which featured an unusual flying-saucer-shaped hull.

Gremyakin presented his blueprints in June 1953. He was a qualified engineer considering the detail and quality of the blueprints and might have worked for Factory No.75, which had previously made several rear turreted medium tanks, like the Object 416, or the Chelyabinsk tractor plant, which also had experience with rear-mounted turrets.

Gremyakin’s surviving blueprints show a low silhouette tank with a large, rear-mounted turret. The engine and transmission were mounted in the front, driving front-mounted sprockets. Both the front hull and front of the turret were very thickly armored but got progressively thinner towards the roof. The side and rear armor, however, was still very thick, especially in proportion to the front.

To keep height and weight down, the designer opted for some interesting solutions. Firstly, the use of externally mounted suspension, using a drum-shaped spring, freeing up internal space. The rest of the tank design was also extremely slim. The hull was only as tall as the engine required, and the turret, in typical Soviet fashion, only allowed for a couple of degrees of gun depression, since the turret roof was so low. Otherwise, the running gear and tracks were the same as those of other contemporary heavy tanks.

Placing the turret to the rear allowed for a shorter barrel overhang and better weight distribution. However, it created a host of other problems. The most obvious one was the driver’s placement in the turret, creating an awkward driving position, further cramping up the turret, and creating a hazard when escaping the tank in an emergency. Additional problems, like sight distortion caused by engine and exhaust heat and barrel damage from the engine cooling/intake, might also have been serious, but which can only be confirmed and addressed when reaching a working prototype stage – which Gremyakin’s invention, and many others alike, never reached.

The unusually small size of the tank was to be praised, considering it was well armored and had mounted a large caliber gun. Total height was 2,140 cm, length was 6,700 cm (excluding barrel), and 9,085 cm including the barrel. 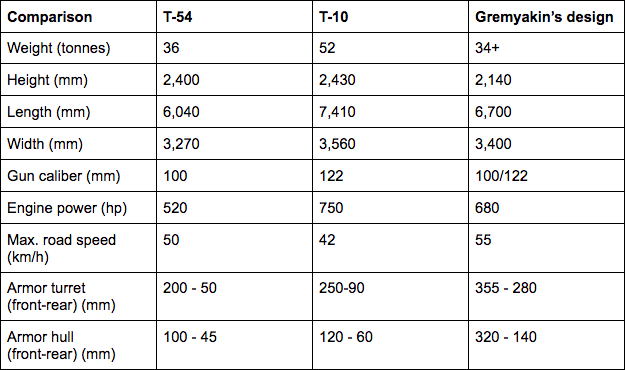 The gun shown in the blueprints was actually a D-25T 122 mm gun. This could easily have been replaced by the 100 mm D-54 or 122 mm M-62, as found on the T-10. It is important to highlight this, as the tank was meant to provide heavy tank-like firepower. The D-25T was the same gun as on the IS-2 and many other WWII-era Soviet vehicles, rendering it obsolete for 1953. This suggests it was added as a placeholder for another gun, suiting the competition. Its ammunition was two-part, stored in the turret. The projectiles themselves were stored alongside the turret wall, starting from the side of the driver, all the way around to the commander. The shell cases were placed in front, and started from the gunner, and ended at the loader. This suggests that there was some kind of moving system for the shells to make them accessible.

As secondary armament, it seems like the tank had one co-axially mounted 14.5 mm KPVT heavy machine gun, probably loaded by the loader, but operated by the gunner. It is also possible that an external roof-mounted machine gun could be mounted, on a pintle, perhaps a 12.7 mm DShK.

The tank had a crew of 4: commander, gunner, loader, and driver. They were all located in the large turret, encircled by the ammunition.

The gunner sat to the left of the gun, on a seat attached to the turret, from where he could aim and fire the gun, plus use the standard turret controls. Besides the main gun sight, he also had a rotating sight above him for vision. The blueprints do not show a hatch for the gunner.

The tank commander sat right behind the gunner. He had 3 or 4 periscopes for vision and also (probably) controlled the radio.

The loader sat on the right side of the gun, loading with his left (usual in Soviet tanks). He had the excruciating job of handling the large ammunition within the very tight space. Thankfully, a loading tray was given, so that he could rest the round on it. Unlike the rest of the crew members, he was faced directly towards the gun. He had one entry/exit hatch with a rotating periscope. There was another hatch behind him, probably for easier access when reloading the tank with ammunition. The loader was probably also tasked with loading the coaxial machine gun, however, it must have been near to impossible due to the driver being in the way. This does raise the possibility the driver would reload the machine gun or some other kind of innovative system.

For a medium tank, Gremyakin’s design was unrealistically well protected. The thickest part of the frontal hull plate was around 320 mm thick. Likewise, the base of the turret was a whopping 355 mm thick, gradually getting thinner as it rounded upwards, to around 60 mm at the roof. It gradually got thicker again towards the rear of the turret, with 280 mm of armor at the base. Even the rear hull armor was, at the thickest, 140 mm angled at 60°, for a total effectiveness of 150 mm. The thinnest part of the tank was the hull belly armor, at 25 mm.

This sort of protection was far superior to contemporary heavy tanks. The T-10 had 120 mm at the front. This begs the question if the tank could even remain around the 34 tonnes area. It was larger than the T-54 (apart from being slightly lower), but with significantly more armor in raw thickness alone.

The engine was of an unknown type, but to reach the desired 20 hp/tonne, it needed around 680 hp. This would point to the V-12-5 engine used on the T-10. The fuel tank was placed on the other side of the hull, behind the turret.

The suspension of the design is very peculiar. Most Soviet tanks used torsion bar suspension, in one form or another. External suspensions were common in pre-war Soviet designs, but their use diminished during the Second World War, both in the Soviet Union, but also in other nations. Gremyakin most likely used external suspension to lower the height of the vehicle and improve maintenance and replacement of the suspension, one of the main drawbacks of torsion bar suspension. Yet what exact system he used is unknown. Externally, it looks like hydropneumatic suspension, similar to that used on some modern main battle tanks. But using hydraulics does not make much sense, and the Soviet Union would not use hydropneumatic suspensions on tanks until the 1960s in tanks like the Object 911 and Object 911B. The only such systems used in the 1950s were on the BRDM-1 and 2 armored cars.

The rounded shape of the suspension indicates to a very unique suspension system; torsion springs. These were used on some Italian tanks and armored fighting vehicles. It consisted of a flattened coil, but instead of mounting it vertically, it was mounted inwards. The movement and tension would not be exerted by compression, but by torque. The most basic use of such springs today is in clothespins.

Considering that it never even got a proper name, Gremyakin’s design never got very far. It was plagued from the start by cramping heavy tank armor and guns into a medium tank. Terrible crew ergonomics and little gun mobility were also compromises Soviet tank designers often took in order to keep height and weight down.

The largest drawback of Gremyakin’s design was ambition. The tank had so many innovative and challenging characteristics.

First was placing the driver inside the turret. This presented a very complex and expensive system, cramping the turret. In addition, it would give a very awkward driving position and compromise turret rotation. It was not a new concept, tanks like the Object 416 used it previously, but with little success.

Secondly, all the features and gadgets on the tank would increase its cost of production, maintenance and complexity. An ammunition pushing system, completely unique suspension to name a few.

Lastly, and most importantly, the armor of the design was, to say the least, excessive. While there is nothing unusual with thick angled armor, it was surely ambitious for a medium tank program with a 34 tonne weight threshold. This would have significantly increased the weight from a vehicle of the weight of the T-54 more to that of the T-10. To maintain its 20 hp per tonne power to weight ratio, it would have required a much larger, more expensive engine.

Other designs were selected for trials, like the Object 907 medium tank from VNII-100. However, none of these tanks offered a substantial improvement over either the T-10 and T-54 tanks. Both of those tanks were already in service and were excellent at what they were designed for, not allowing any room for a very expensive medium-heavy hybrid.