The M4 Sherman is, without doubt, one of the most recognizable and well-known tanks of the Second World War. Entering service in 1942, the tank would be mass-produced in many different variants and saw service with all the major US allies. After the war, the large number of surplus tanks meant that nations with little-to-no armor and limited budgets could purchase a decent and reliable tank in substantial numbers. Some of these, such as Argentina or Israel, would eventually modify and update their tanks to keep them in service. The Sherman tank would go on to see service and combat for many decades after its debut, with one of the last occasions being the Uganda-Tanzania War of 1978-79.

In October 1962, the Protectorate of Uganda achieved independence from Britain. The following decades would be turbulent and marked by instability. To counter new leader Milton Obote’s adoption of Socialism, Great Britain and Israel backed a military coup led by Colonel Idi Amin. This led to eight years of brutal military rule ending with the overthrow of Amin’s regime after defeat in the Uganda-Tanzania War.

Uganda and Tanzania share a border which, during the Nineteenth Century ‘Scramble for Africa’, had served as the border between the British and German empires. These boundaries, drawn on a map, often divided ethnicities and put together a mixture of ethnic groups ruled by ‘divide and conquer’, creating decades of conflicts after independence. The northern Tanzanian province of Kagera, with a landmass of 695 square miles (1800 square kilometers) and bordering Lake Victoria to its East, Rwanda to the West, and Uganda to its North, was, at least according to Amin, rightfully Ugandan territory. Coincidentally, the province also housed around a thousand Ugandan dissidents, opponents to Amin, who had moved there after a failed coup against the dictator in 1978. From Kagera, they mounted cross-border raids with the collusion of Tanzanian authorities. After a short build-up campaign, in order to crush the dissenters and the Tanzanians who aided them, Amin launched Operation Liberation in October 1978 without a declaration of war.

In the early years of Obote, Uganda enjoyed very friendly relations with Israel. Because of its strategic location south of what was then Sudan, Uganda was a useful ally for Israel. Sudan had supported Egypt in the Six-Day War and would send troops to fight Israel during the Yom Kippur War. Uganda received Israeli military advisors and surplus Israeli equipment during this period, most notably, 12 M4A1 Shermans equipped with the M1A1C 76mm gun, and a number of M38 Jeeps in 1969. It is not known how the tanks got all the way from Israel to landlocked Uganda, but an informed guess is that they were ferried to Kenya and then rail transported.

In early 1972, shortly after Amin had taken over, and with the intention of waging war with Tanzania to obtain a land corridor to the Indian Ocean, there were some talks regarding acquiring a second batch of tanks and 24 McDonnell Douglas F-4E Phantom II fighter-bombers. Negotiations would not materialize and in revenge, Amin closed the Israeli embassy and severed diplomatic relations. The deterioration of relations would culminate in the Israeli raid on Entebbe airport on July 4th 1976 to free the hostages from the Palestinian PFLP-EO hijacked Air France Tel Aviv-Paris flight after Amin had allowed the hijackers to use Entebbe as a destination. After this, Muammar Gaddafi’s Libya became Amin’s main backer and supplier.

The 12 Shermans Uganda purchased from Israel were the first tanks in the country’s inventory. Although all of them were of the M4A1 variant, they were a variety of sub-variants and not one was exactly the same as another. Israel had got their hands on their Sherman tanks in the first place from US Army depots in Italy and the Philippines through legal and illegal means. To modernize them, Israel had heavily modified their Shermans. Modifications included: the addition of French-made smoke dischargers on each side of the turret (presumably from the French supplied AMX-13); the addition of spare track carrying brackets on the side of the turret, and at the front of the hull; the fitting of aftermarket radio antennas; and the fitting of a bracket holding a searchlight on the gun mantle. In images of these tanks in Ugandan service though, the searchlights seem to have been removed, either by the Israelis before delivery or through wear and tear in Uganda.

Once they arrived in Uganda, the tanks were painted deep bronze green. Black and white photos taken in 1987 of a knocked out M4A1 on a road north of Kampala show what appears to be two-tone camouflage on the tanks, rather than just plain bronze-green. There are two possible explanations for this: 1. the locals have applied their ‘own camouflage’ or it has been covered in graffiti (See Cuban Comets for similar artistic expressions by locals); or 2. and most likely, the camouflage has weathered.

For markings, the tanks were given red and green diagonally halved rectangles on the sides, on the rear left mudguard, and on the frontal curving of the hull next to the tracks. The rear right mudguard seemed to bear a unit emblem. The tanks’ serial numbers were written in white on the rear.

It is not known if the tanks played any part in the Amin-led coup in 1971 nor the brief border clash with Tanzania in 1971. They would, nevertheless, play a key role seven years later in the Uganda-Tanzania War. The twelve M4A1’s, along with ten T-34/85’s from Libya, a number of British Ferret Armoured Cars, thirty-six Czechoslovakian OT-64C’s and around sixty Soviet BTR-40’s, composed the armored forces of Amin’s army and led the attack into Tanzania in October 1978. All the M4 Shermans and T-34/85’s were part of the 5th Mechanized Specialist Reconnaissance Regiment ‘Suicide Regiment’ or ‘Malire Mechanized Regiment’ under the command of Colonel Bernard Rwehururu. The ‘Suicide Regiment’ was ordered to attack the bordering town of Mutukula along the Kyaka Road before meeting other forces Bumazi and advance to Bukoba. By October 30th, Ugandan troops were 20 miles inside Tanzanian territory and outside the city of Kyaka where their advance stalled. Uganda had not planned for a long war and hoped that their initial strike would make Tanzania sue for peace.

However, their initial advance had been met with fiercer resistance than expected and soon after, Tanzania sent their own forces and armor, consisting mainly of Chinese Type 59A’s, a Chinese copy of the Soviet T-54/55. With their stronger armor, lower profile and superior firepower, these tanks outclassed all of the Ugandan armor, forcing them to retreat. No M4A1 is believed to have been lost in the invasion, but one or two were destroyed during the November-December Tanzanian counter when stationed around the border in Mutukula. On December 24th 1978, Ugandan forces crossed the border back into Uganda. By this point, the M4A1’s had been fighting for almost three months with no maintenance.

On January 20th, Tanzanian troops crossed the border and commenced their drive up north. On the Ugandan side of the border of Mutukula, troops of the 208 Brigade of the Tanzanian Army engaged a platoon of Shermans, knocking one out before the rest retreated. In March, three M4A1’s along with around twelve Libyan T-55’s attacked the Tanzanian 201st Mechanized Brigade. Without previous scouting, the two forces collided into each other in the Lukaya swamps on the 10th. After initial success by the Ugandans, the Tanzanian forces regrouped and pushed all the way up to Entebbe, which fell on April 7th, and Kampala falling on April 10th. Two M4A1’s were knocked out in skirmishes on the outskirts of the Ugandan capital. There is no further recorded deployment of the M4A1’s and the war would end on June 3rd 1979. There are no official records, but it is presumed that six or seven out of the twelve Shermans were knocked out by Tanzanian forces or left un-operational.

Some of the remaining Shermans were again used in 1985 during the coup of General Tito Okello in the closing stages of the Ugandan Bush War. In June 1985, Okello ordered his brigade to march on Kampala to overthrow Milton Obote. One of the two Shermans of this brigade was knocked out in the minimal fighting which took place.

The M4A1’s would remain in Uganda’s inventory according to some Western visitors until at least 1999, when three were reported to still be operational.

Even by the time of the Uganda-Tanzania War, the Shermans were obsolete and had little-to-no chance against Tanzania’s more modern equipment. Despite this, the Shermans showed their resilience and longevity during the war. 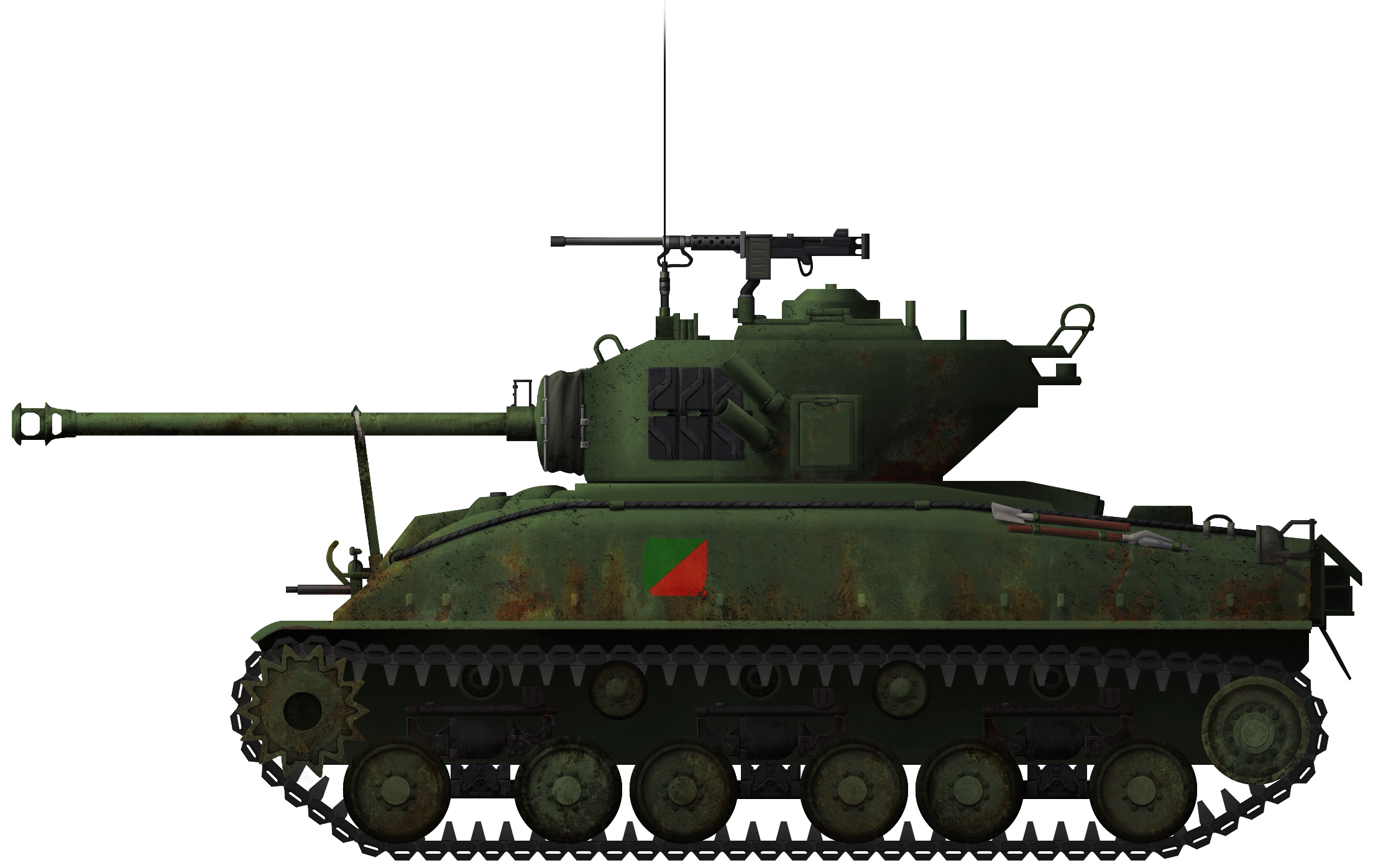 Illustration of a Ugandan M4A1 (76) HVSS produced by Andrei Kirushkin, funded by our Patreon Campaign.

This 1974 French footage shows an M4A1 being ridden by Idi Amin in a mock training which concludes with Amin claiming it represents the retaking of the Golan Heights from Israel. 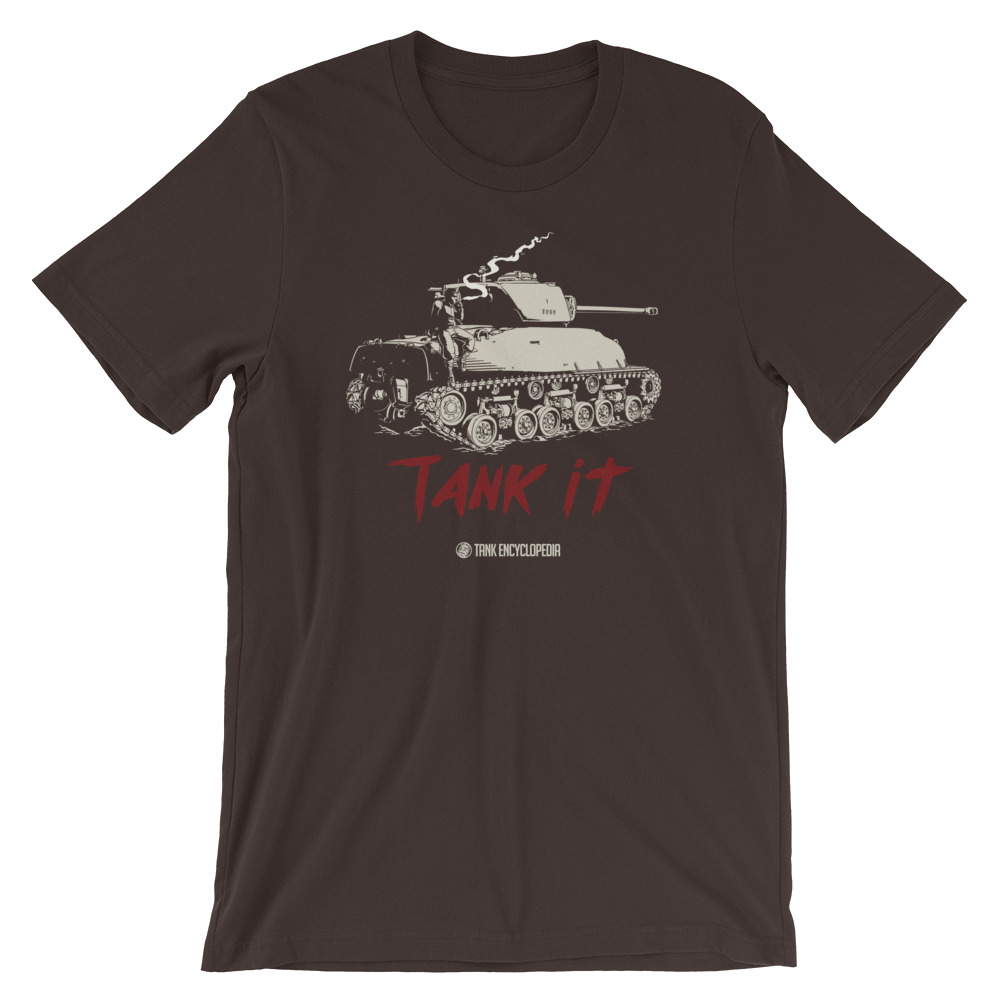 Chill with this cool Sherman shirt. A portion of the proceeds from this purchase will support Tank Encyclopedia, a military history research project. Buy this T-Shirt on Gunji Graphics! 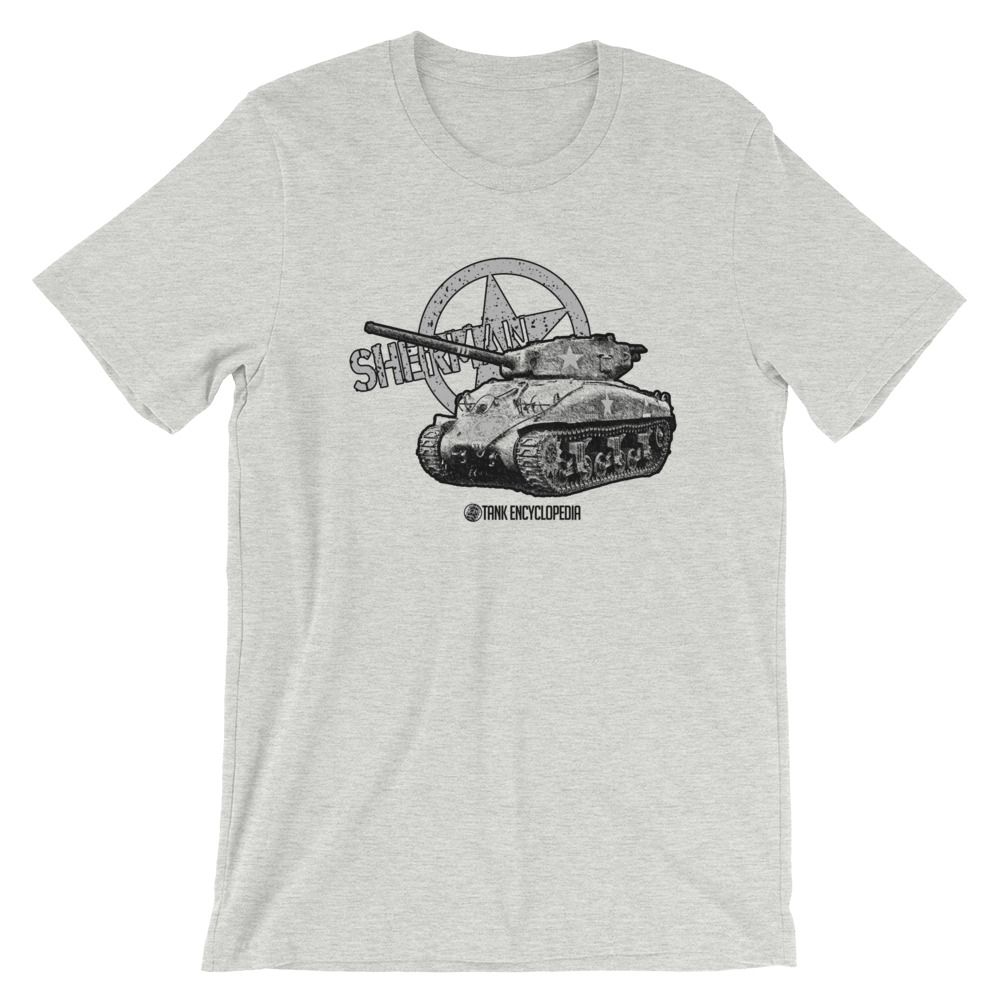 Give ’em a pounding with your Sherman coming through! A portion of the proceeds from this purchase will support Tank Encyclopedia, a military history research project. Buy this T-Shirt on Gunji Graphics!

Apart from the illustration, we don’t own any of the photographs. We have simply referenced them from their original source.

kindly advise me on usage of sherman tank photos for my own video production.
Are the photos licensed?Can i use them with referene?
please advise

Use them with references. We do not own them (except for our illustrations).
Out illustrations are free to use for non-commercial uses with proper crediting (website+illustrator)