Right from the early days of World War One (1914-1919), many people, military, political, and civil, saw the need for armored vehicles to break what had stagnated into the focus of the war: a long and brutal slugging match between the great powers across the continent of Europe. Until the revelation that the tracked ‘tanks’ would be the selected primary method of waging mechanical war across the shattered landscape of Europe, many of these same visionaries and inventors considered wheeled vehicles and many came to exactly the same outcome.

Specifically, they rightly concluded that large diameter wheels were better off-road in soft ground and for crossing obstacles than small wheels, as they had a greater surface area over which to spread the weight of the vehicle. Many of these designs therefore simply become a ‘big-wheel’ landship. often in the form of a pair of large front wheels with a small stabilising wheel or tail behind. The 1916 design from Anton J. Jehlick is reflective of this but he went one step further. Jehlick designed not just large-diameter wheels, but an enormous roller in the manner of a large diameter cylinder on its side. Jehlick produced one of the strangest looking of these big-wheel landships.

Jehlik had an unusual background for an armored vehicle designer. He was not an engineer or soldier. He was, in fact, a pharmacist, known at the time as a ‘druggist’. He had graduated as such by 1899, married Bertha and had had a son around 1910. By the time of the outbreak of war in 1914 and prior to the US entry into WW1 in 1917, Jehlik was working as a pharmacist in Chicago and, as an educated man, no doubt saw an opportunity to consider the need for an armored vehicle for the war he would have seen reported in the newspapers of the day.

Jehlik described his ‘armored vehicle’ as being in the manner of a “self propelled armored vehicle, comprising a large, heavy, cylinder containing the driving engines, ammunition, guns, equipment, and men to operate the artillery, guns, etc., and a second look-out compartment, mounted above the cylinder”.

That description of the machine really does not do justice to the size of it. The cylinder alone was to be 20 to 30 feet (6.1 to 9.1 metres) in diameter and 50 to 100 feet (15.2 to 30.5 metres) wide. In order to be protected against any possible enemy fire, Jehlik seemed to have ignored the practicalities of how heavy armor plating is and suggested armor plating of the type used on battleships, between 6 and 8 inches (152 to 203 mm) thick.

Disregarding for a moment Jehlik’s experience or lack of experience in vehicle technology or military matters, his design was very specific about what it had hoped to achieve. His goal was to create a vehicle capable of travelling across open-ground at “a high rate of speed” with the large heavy cylinder crushing obstacles such as barbed-wire entanglements. The armor would protect the men and vehicle from enemy fire. The roller would crush a path for troops to follow, and the size of the vehicle enabled it to cross trenches.

The armament for the vehicle was concentrated in the aft section, facing backwards, and positioned over a pair of small trailing wheels at the back. These wheels were actually ovaloid in shape, in the manner of an American football on its side, with the axle through the sharp points on each end.

Each gun was mounted in “a series of semi-circular sponsons” arranged at 30 degree intervals around the circular arc of the aft end. Further armament was provided fore and aft by means of loopholes through which rapid-fire guns were positioned. The exact type and number of weapons considered is not stated in Jehlik’s patent application, although the images provided show 5 large guns in the aft end on rotating floor-mounts. None of the rapid-firing weapons (likely he means some kind of machine gun) is shown however. The position of the oval loopholes through both walls of the heavy drum roller at the front would indicate positions for up to 5 such guns.

Why the primary armament faces to the rear is unclear, although possibly, Jehlik was picturing the vehicle rolling through enemy lines and then firing backwards to harass the enemy. This would, of course, mean firing your guns in the direction of your own following forces which could be extremely hazardous.

Only a single member of crew is shown by Jehlik in his design: the driver. Positioned well above the rotating cylinder and fighting area of the vehicle, the driver sits in an armored cab that would have provided an excellent, if vulnerable view of the terrain in front and behind him. Bullet guards in front and behind him were intended to stop troops shooting upwards into the cab. Assuming just this one man was needed to steer the vehicle and control the propulsion, it would have needed another man to command it, presumably stationed with the driver on top and at least 10 men inside the main space just to operate the guns. Assuming just two men per gun and one per machine gun would have been required, this could have been as much as 15 or more men. Access to the vehicle for these men was concentrated in just a single rectangular floor hatch in the centre of the fighting compartment. The reason for this hatch was to provide a defence for the men inside against enemy ingress. Just wide enough for one man to enter/exit at a time, this would prevent the enemy from climbing in, and if they tried, the machine could reverse over them with the roller. Just as this may have sounded good for defence of the machine, it was also a major problem for the crew. All of the men inside would have to exit the machine one at a time through this small hatch and would have to hope the machine was not going backwards at the time. This slow egress is even more of a problem when it is appreciated that Jehlik considered the roof space of the fighting chamber as the best place for the fuel tank – above the men manning the guns.

This very large machine was to be propelled by three four cylinder engines, although Jehlik was careful to mention that ”any number” of engines could actually be used in order to achieve the “high rate of speed” he wanted from the vehicle. The engine/s for the vehicle were shown rigidly connected to gearing to the main cylinder at the front. No provision appears to have been provided for a gearbox of any kind. Steering was to be provided by the pair of ovaloid trailing wheels under the back of the fighting space which could be rotated by more gearing, creating a rear-steering sensation for the driver. The petrol to power the engines was held in a single large tank on the ceiling.

Given the enormous size of the machine, Jehlik’s Armored Vehicle could easily be dismissed as an unworkable idea. This would ignore the purpose behind using a ‘big-wheel’ type machine and why so many people at the time, and even subsequently, came to the same conclusion of using large-diameter wheels. They are simply more effective at crossing obstacles and gaps than smaller wheels. The problem is that they need to be huge to put down enough surface area onto the ground to spread their load adequately and that size also means they become unwieldy to move and an easy target for the enemy.

For Jehlik, this problem is slightly alleviated by making his ‘big-wheel’ into a roller which significantly increases the bearing surface which could carry the weight of the machine, but this also adds additional problems. Making the roller wider makes it significantly heavier, as the ludicrous amount of armor he was proposing, far more than would ever be needed to protect against small arms, would have to be extended to cover the full width of the machine. The wider the machine, the more armor and thus the more weight carried. Bearing that in mind, the rather puny suggestion of just a trio of four-cylinder petrol engines would likely have left his machine completely immobile on anything other than a very hard surface. It is not known whether Jehlik ever sent his ideas to the Army or Government of any nation, and if he did, it certainly was not adopted by anyone. The idea was as impractical for him as it was for every other ‘big-wheel’ machine before or since. Even so, the work of men like Jehlik, submitting their ideas at a time of war for a brand new type of weapons, adds to the understanding of how armored warfare evolved from its crude and often ill-conceived beginnings.

Upon his death, Jehlik was described in a periodical of the day as being of the “best Bohemian blood” and his cemetery records provides a city of birth for ‘Antone J. Jehlik’ as Prague, in modern-day Czechia (Czech Republic). This means he had immigrated to the US as a child, where a name like Jehlička (a more common Czech form of the name) could be Americanized like so many other names were modified as new citizens arrived and became US citizens. Jehlik passed away on 28th September 1920 after being in ill-health for some time. He was laid to rest in the Bohemian National Cemetery, Chicago. No trace of his pharmacy business remains today and Jehlik’s design has been forgotten.

Jehlik’s grave provides a birth date of 2nd May 1878, meaning he was just was just 42 years old when he died. He left his widow Bertha and a son who according to grave records was Eugene Franklin Jehlik. His death announcement in 1920 stated his son was 10, but Eugene’s grave shows a date of birth as 25th April 1918. The reason for this is unclear, but reporting mistakes are not particularly unusual. 1st Lieutenant Eugene Jehlik was killed on 28th November 1942 commanding an attack of M3 Lee tanks along a railroad track at Djedeida in Tunis, North Africa. He is buried at the Rock Island National Cemetery, Illinois. 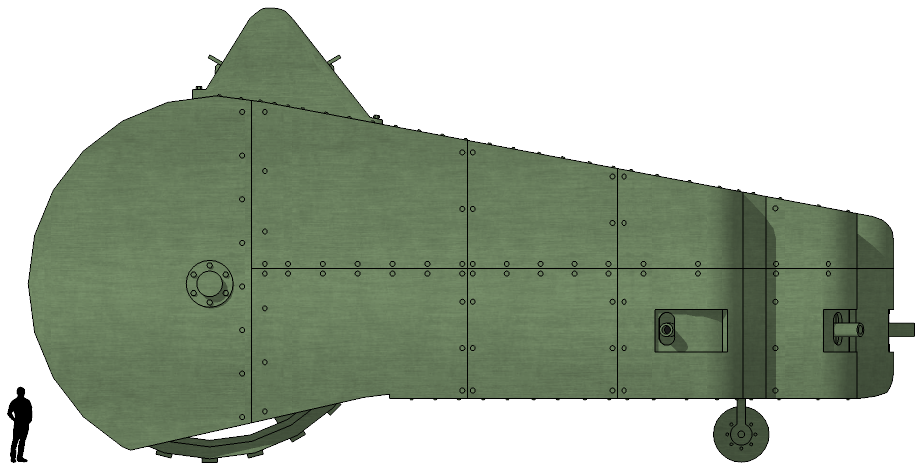 this would have been unsteerable, rear footballs or not