After the end of WWI, the Japanese eagerly expanded their empire into China, creating the Manchukuo puppet state. The government of Thailand, which was a largely neutral country, saw a great opportunity to be an ally with this new great power in the world, especially after increasing pressure from the USA and Britain after the 1932 revolution by People’s Party (คณะราษฎร). Plaek Phibunsongkhram, the newly elected prime minister, tried to balance western power by bringing the Empire of the Rising Sun into South East Asia (SEA).
In the late 1930s, the Royal Thai armed forces began to order Japanese weapons, which were cheap and accessible. Japan was the nearest producer of tanks and spare parts. If the Thai Army purchased tanks from other countries, such as Great Britain, they would have to wait nearly half a year for their order to be delivered because of the vast distances involved. Japan was a lot closer. It was also politically a good idea to be on friendly terms with one of the most militarily aggressive countries in the region at that time.
The Royal Thai Army ordered a number of weapons and vehicles from Japan. One of most interesting was the new Japanese light tank, the Type 95 Ha-Go. This was Imperial Japan’s most produced tank. It was renamed the Type 83 (แบบ ๘๓, Prap̣heth thī̀ Pæd s̄ib s̄ām), after the Buddhist year of 2483, 1940 to the western world (Gregorian Calendar). 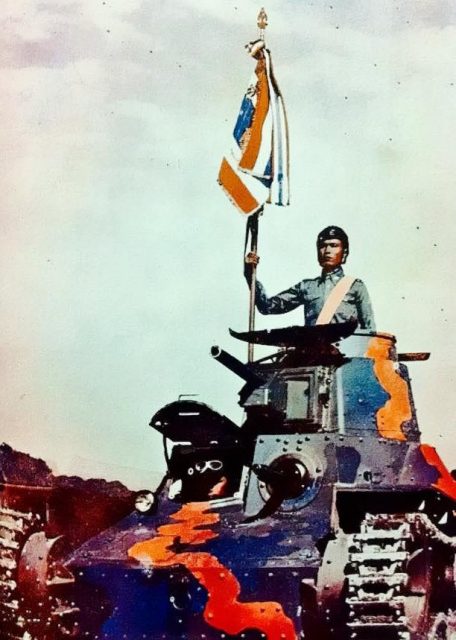 An official photograph of a Royal Thai Army Type 83. The camo of the tank in this photo is Imperial Japanese Army pattern so it is believed that this photo was taken a short time after their vehicles arrived.

Thailand became interested in obtaining tanks for their army at the end of World War I, after they received French reports on what these new vehicles had achieved in action. The Thai military studied the possibility of the use of heavy tanks for supporting infantry. This idea was later dropped as the heavy weight and high ground pressures of such a vehicle were not suitable to the terrain of Thailand. Because of this, consideration turned to medium and light tanks.
It unknown exactly how many Ha-Go tanks actually made it to Thailand. 50 is the most widely accepted number. From source material analysis*, it would seem that Thailand started to receive this light tank on the 25th of February 1941, when a steamship under the name of Kamei Maru arrived from Yokohama port carrying 14 tanks. This delivery took place during the first phase of Franco – Thai war (November 28, 1940 – May 9, 1941). This war was fought between France and Thailand over territories in French-Indochina. In footage from the archive of the NHK (Japan’s national public broadcasting organization), the Type 83 tank is seen to take part in the victory parade on 27 April 1941. The next day, the Thai army would expand their Armored Regiment to two battalions. The other battalion would be equipped with the Vickers Mk. E Light Tank, purchased from Great Britain before hostilities. This tank was known as the Type 73 in Thailand. They also had a number of Carden-Loyd Mk.VI Tankettes. 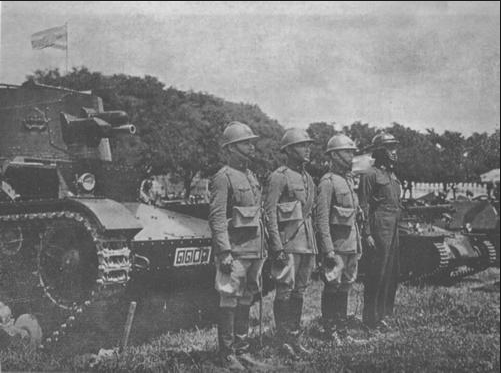 Thai tank crew with the British Vickers Mark E, known as the Type 73 in Thai service.
The Thai military made no modifications to the Ha-Go, believing it was perfect for their needs in its factory form. The Ha-Go was not originally built with a radio. To compensate for this, the Thai added American built walkie-talkies to some of the tanks in their service after WW2. They also added headlights to the front of the tank.

The tanks were delivered as Japan put forward it’s ultimatum to the Thai Prime Minister, Plaek Phibunsongkhram. The invasion came on December 8th, 1941. Despite an initial, ferocious skirmish in southern Thailand, resistance lasted only a few hours before Thai capitulation. With this action, Thailand lost its neutrality, as the country was effectively press-ganged into the service of the Japanese Empire and became part of the Axis forces.
The Royal Thai Army (RTA) high command established the Phayab Army (กองทัพพายัพ) on 21 December 1941. The Cavalry Division (35th and 46th Cavalry Regiments) and 12th Cavalry Regiment were also attached to this army.
This action by the Thai army led the Republic of China Army (RCA) to respond. The Chinese deployed the 93rd Division from Jinghong (เชียงรุ้ง) to set up their new HQ at Kengtung (เชียงตุง) and defensive positions at Mong Ton (เมืองต่วน), Mong Hsat (เมืองสาด), Mong Yawng (เมืองยอง) and other bordering locations.
This amassed Thai force, the advanced guard, armed with their new tanks, did see action as part of the Japanese lead invasion of the British Territory of Burma, modern-day Myanmar, on the 10th of May 1942. The Thai army moved to occupy the state of Shan (“Saharat Thai Doem” to the Thais), which was promised to Thailand by the Japanese if they won the war. The Type 83s had a very hard time during the invasion of Saharat Thai Doem. This was caused by poor roads, impenetrable rainforest, mountainous terrain and lack of fuel or spare parts. Biological obstacles were also faced by the crews such as tropical diseases.
The RTA also attempted to use both traditional horse cavalry and armor as a combined force. It was soon found that the horses were not suitable in the harsh jungle environment of the Shan state. Many of the animals succumbed to disease, as a result some cavalry units were withdrawn from the state. This left the Type 83 to maintain their infantry support duties alone. 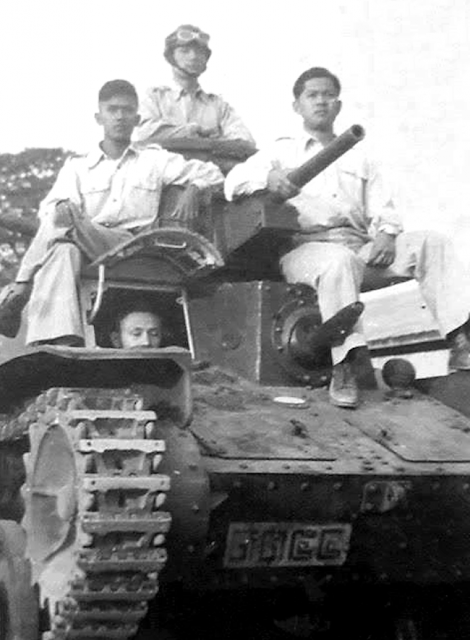 Type 83 with crew. The markings on the lower hull represent something of a military license plate. ๑๑๕๔ = 1154
The short period the Thai tanks were in action showed them how incapable the tank actually was when it came to facing enemy armor and infantry. Japanese instructors had taught Thai crews to fire hand weapons through the tank’s various viewports, a highly impractical affair. The crews were later equipped with Mauser rifles and Madsen light machine guns which gave them ability to fight as infantry if needed. In 1944, all of the tanks were recalled to Thailand. No official records were ever found to suggest the tanks ever engaged enemy armor.
By 1945, it was clear to Thailand that the days of the Japanese Empire were numbered. Thailand planned to revolt against their Japanese masters, but the end of the war came about before the action came. This, of course, put an end to the Thailand’s enforced alliance with Japan.

A famous man served in these military actions. This was Prem Tinsulanonda (เปรม ติณสูลานนท์), a Type 83 commander. In this quote he speaks of his experience:
“There were only little places for tank operation, the environment was not an easy one. There was jungle, dales, and creeks. When the terrain was too rough we had to use horse cavalry for reconnaissance and protection of our flanks.”
Tinsulanonda would later go on to play a large role in post-war Thai politics, becoming the 16th Prime Minister of Thailand from 1980 to 1988, and most recently playing the part of Regent of Thailand until the recent death of the Thai king, Bhumibol Adulyadej. 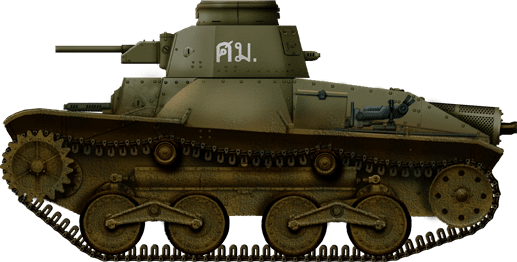 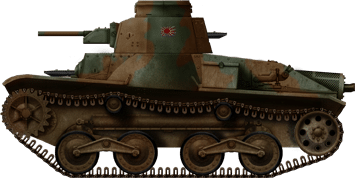 A Typical Japanese Ha-Go for comparison. Both illustrations are by Tanks Encyclopedia’s own David Bocquelet. 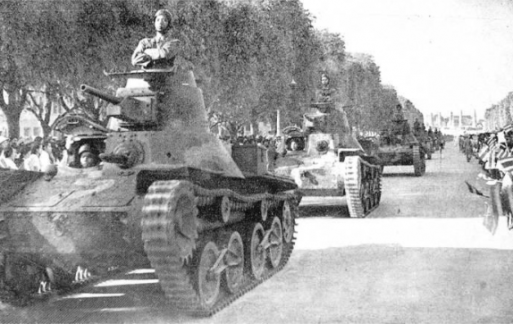 The Royal Thai Army kept the Ha-Go far past its hypothetical sell-by date. In 1946, the Royal Thai Army was made substantially smaller, with most of the tanks heading to Bangkok. A couple of tanks found their way to other, smaller bases in the country.
With the Korean War now looming on the horizon, American military advisors came forward in an effort to help the Thais upgrade their armored units. They also presented disturbing facts about the Ha-Go to the Thai military leaders.
The American advisors informed the Thais of how vulnerable the vehicle was when facing tanks like the M4 Sherman, hand-held anti-tank weapons such as the Bazooka, and even .50 cal (12.7 mm) heavy machine gun fire. With the ensuing Cold War, these weaknesses would only be amplified. The surplus of compatible 37 mm ammunition would also run out with time. This led Thailand to re-think its armor doctrine. 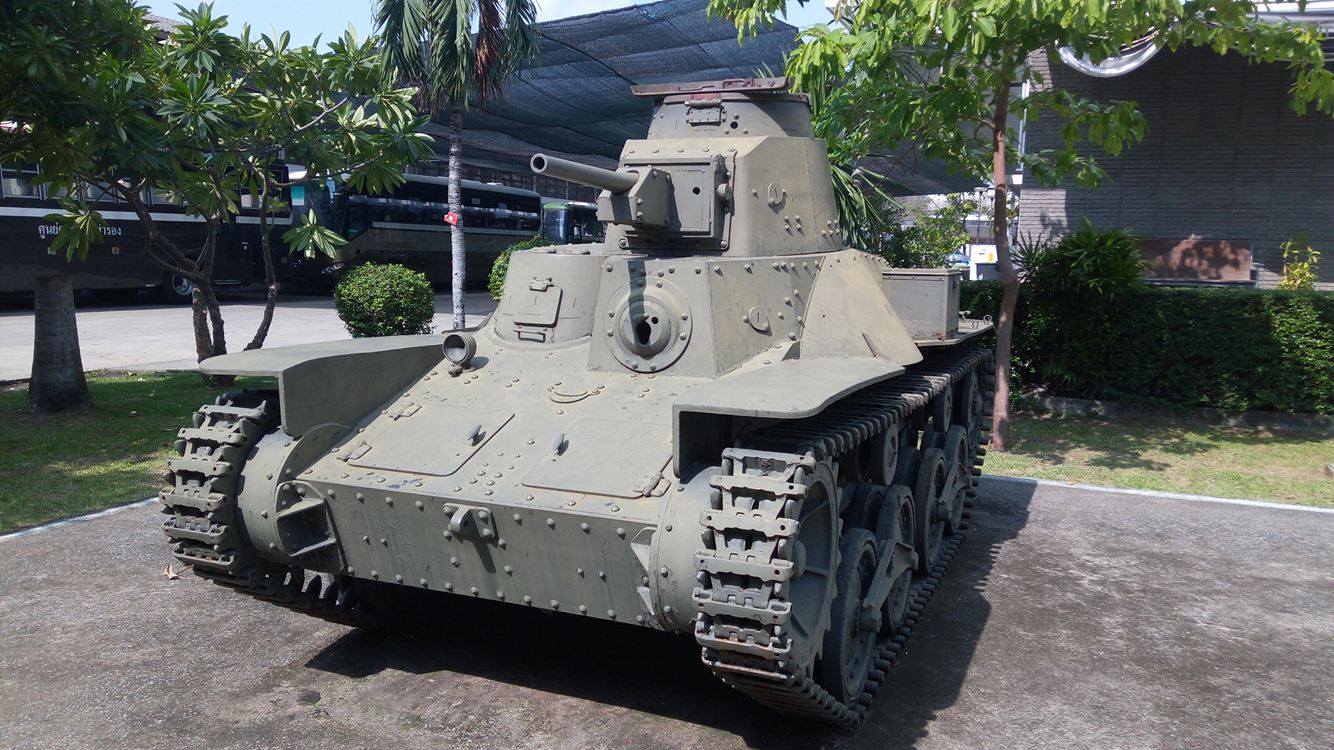 A preserved Type 83 at the Reserves Training Center, Territorial Defense Department, Bangkok. Photo: Kittichart Boonyapakdi
The Royal Thai Army did not officially phase out the Type 83 until 1952. None of the vehicles were sent in the Thai contingent that took part in the Korean War. The tanks were not fully taken off active service until 1954. They did, however, remain on military listings past this date. It is believed that Thailand’s Special Operations Commandos used them as training vehicles up to the late 50’s, early 60’s.
At least 7 of the tanks are preserved in Thailand today in museums and monuments. A number of the tanks are preserved at the Royal Thai Army’s Special Operations Centre at Fort Narai. 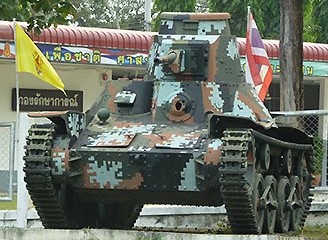 One of the Type 83s is still in the inventory of the Royal Thai Army. This is a special vehicle, as it is still in running condition with all of its original equipment. It is believed that there are only 2 Ha-Go’s in the world that are still running. The Thai Army often run it for displays, parades and official ceremonial events. It is also the only World War Two era Japanese vehicle in the inventory of any active army in the world. 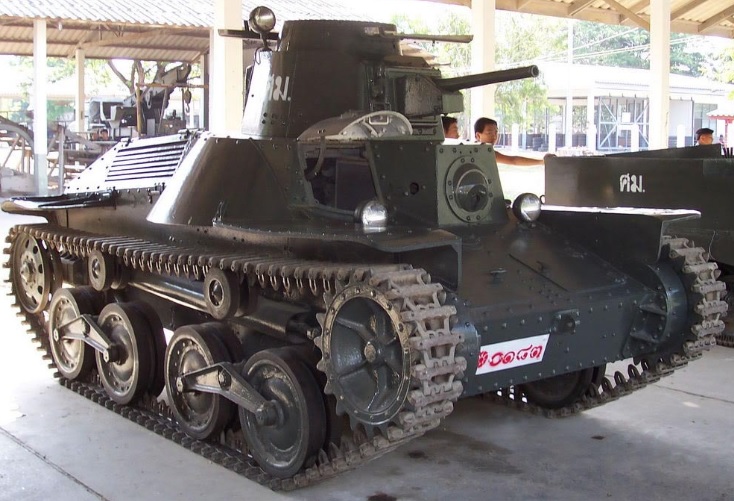 A preserved and functional Type 83 of the Royal Thai Army’s Fort Adison Cavalry Center at Saraburi.

Video of the preserved and functional Type 83 of the Royal Thai Army’s Fort Adison Cavalry Center at Saraburi.