This article was originally published on Tanks Encyclopedia on 1st April 2018, as part of our April’s Fools Day celebrations. The information contained within is mostly fictional but some parts are actually true, such as the use of the prototype vehicles from Kubinka in combat, or the use of an antique cannon in the Syrian Civil War. Some other things are partly true, such as improvised AT mines made from tin cans, which actually happened at the siege of Odessa, 1941.

Since the opening up of Soviet archives following the collapse of the USSR, all fields of history have been enriched by the flood of esoteric knowledge. In the field of military history, archival access has proven invaluable to those studying tank prototypes and concepts. In February 2018, Russian historian, Iourii Kasholot, announced he had found evidence of a previously unknown Soviet endkampf plan, regarding the fear of Moscow being entered by the Wehrmacht in 1941.
Among other things, the documents he found revealed that all of Moscow’s citizens, regardless of age and sex, would have been conscripted to fight in the Red Army and armed using archaic weapons of the Kremlin armory museum. Moreover, another suggestion of the plan was that if tanks began to run out of munitions, a new battalion should be formed of tanks equipped with gunpowder cannons from Kremlin armory stocks. As a result, the concept of T-26s with Kremlin Armory cannons was suggested. Even today in the Syrian Civil War, evidence of gunpowder cannons being used can be found, proving that archaic weapons are still relevant.
Fortunately, the plan was never implemented due to the German halt on 5th December 1941.

The documents in question are the minutes and transcripts of a secret meeting of the Politburo of the Communist Party of the Soviet Union and some Marshals of the Soviet Union which took place on October 22nd 1941. This meeting took place following various early defeats around Moscow, such as the Red Army’s 21st Tank Brigade’s failed assault on Kalinin.
Unfortunately, the documents from the meeting themselves cannot be reproduced, rather like other secret documents such as those on Chinese prototype tanks destroyed in nuclear testing or blueprints of Japanese superheavy tanks. However, Kasholot provided some summaries with some direct quotes.
A basic outline of key points of this endkampf plan is thus:

During the Battle of Moscow, an estimated 250,000 women and teenagers had already been conscripted to build anti-tank fortifications and dig trenches at the Mozhaisk defense line, protecting the west of Moscow as far as Kalinin. All civilian production centers had long since been converted to wartime production.  By the start of October, twenty smaller factories were producing (or were at least organizing production of) weapons and munitions. Many of the weapons produced by these factories were improvised, such as trench flamethrowers made from soda water cylinders, and even AT and AP mines, made from tin cans (thus, somewhat humorously labeled ‘Caviar’, ‘Khalva’, etc). However, this was not seen as enough. 660,000 Red Army soldiers were already encircled at the towns of Vyzama and Briansk, approximately half of the Red Army’s overall manpower at the Battle of Moscow, meaning that more manpower might be necessary if the Wehrmacht were to advance further into Moscow.
According to transcripts provided by Kasholot, there was talk of ‘total conscription’ (Rus: каждый человек для себя) of all peoples in Moscow, regardless of age and sex. When Marshal Zhukov asked Stalin what the people were to be armed with, Stalin replied: ‘We had to find our own weapons in the civil war, now we have an entire armory [meaning the Kremlin armory] here in Moscow – find some old rifles and cannons – everything can be mobilised against the Fascists!‘

Discussions then went on to talk about the effectiveness of such a move and whether it was really worth risking the lives of civilians armed with outdated weapons against Panzer armies. After a while, Stalin suggested that if Moscow’s suburbs were breached, the citizen conscripts would not be fighting alone because tanks should be pulled back to the Kremlin walls to fight using indirect fire methods. Marshal Vasilevsky then replied that if the tanks pull back to the Kremlin, they would be useless because they would not have any munitions besides some machine guns.
Stalin replied that these tanks, too, can be armed with weapons from the Kremlin armory, suggesting that ‘If a huge blunderbuss is good enough for a small boy, then a great licorne is good enough for a T-26. We will defeat the invaders with the weapons that the last ones [IE, Napoleon, thus referring to Napoleonic war cannons] used!‘ Kasholot suggests that this caused a moment of silence at the meeting, before Stalin continued that such tanks could be converted even now, and form an independent battalion. However, the conversation was quickly moved on by Zhukov’s suggestion of taking prototype tanks out of the Polygon testing ground, and fielding them instead. This was agreed upon, and further matters were discussed.
Fortunately for the Politburo, and indeed, the citizens of Moscow, this endkampf plan as a whole came to nothing because the German advance was halted on 5th December. Soviet resistance and counter-offensives had managed to stave off attempted further German advances from mid-November. By this time, the cold weather had set in, and the winter of 1941-1942 was the coldest winter of the 20th century. As a result, no further German advances were attempted, and the Soviets began their successful counterattacks.

Despite the plan coming to nothing, one part was enacted. Between November and December 1941, various tanks were taken from the Polygon and were then pressed into service. This included regular vehicles in the scrapyard such as T-26s, which were reassembled from discarded parts, but also various prototype / experimental vehicles.
The T-100Y and SU-14 prototypes were used for indirect fire roles as part of an ‘Independent Artillery Division for Special Duties’ to the west of the Polygon at Kubinka. At least one SU-14 is believed to have engaged targets from a long range, but no further information on their combat is known. The T-100Y and one of the SU-14 prototypes stand today in Kubinka Tank Museum (the other SU-14 prototype was scrapped in 1960).
The T-29 medium tank, as well as the A-32 and A-20 (T-34 prototypes) are reported to have been fielded in 1942 as part of a special detachment, also. Information is limited, but the T-29 was last photographed at Zavod 100 in Chelyabinsk in 1942. It was recycled in 1943 along with several other experimental vehicles, including the KV-7. 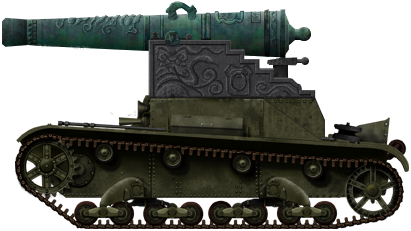 Artist’s interpretation of a T-26 with a cannon from the Kremlin armory by Tank Encyclopedia’s own Amazing Ace.

Example of a cannon at the Kremlin Armory, as used in the Napoleonic Wars. Source: russianreport.wordpress 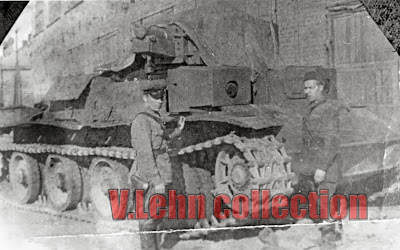 The Rahman Corps, a Syrian rebel group in Damascus, was seen operating an antique cannon strapped to the rear of a lorry. Videos show the vehicle in use between July and November 2016. This proves that despite weapons being antiquated, they can still be viable for a war effort.

Rahman Corps footage of their antique cannon SPG, Damascus, July 2016.
Sources:
A summary of the transcript from a meeting of the Politburo of the CPSU, October 22nd 1941, provided by Iourii Kasholot
“The Greatest Battle: Stalin, Hitler, and the Desperate Struggle for Moscow That Changed the Course of World War II” by Andrew Nagorski
“Battle of Moscow 1941–1942: The Red Army’s Defensive Operations and Counter-offensive Along the Moscow Strategic Direction” by Richard W. Harrison
Rukkas, Andriy, ‘The Red Army’s Troop Mobilization in the Kiev Special Military District during September 1939’, The Journal of Slavic Military Studies 16 (2003), 105-136.
Barnes, Steven, ‘All for the Front, All for Victory! The Mobilization of Forced Labor in the Soviet Union during World War Two’,  International Labor and Working Class History 58 (2000), 239-260.
tankarchives.blogspot
Note: The views expressed in this article do not reflect those of the Tanks Encyclopedia team, or reality.

Fun article, it’s not worth considering creating a section of concept vehicles. The T-26s with Kremlin Armory Cannons like the Italian Panther tank does not really fit into prototypes.

This one is completely fake, so I stuck it in with the other ‘Soviet WWII Fake Tanks’ articles.

Damn you got me on I’m on vacation, i have totally lost control of the days.

Terrific post however I was wanting to know if you could write
a litte more on this topic? I’d be very grateful if you could elaborate a little bit more.
Thank you!

I can imagine actually seeing this in a soviet parade.