This article has been published on Tanks Encyclopedia on the 1st of April 2018, as part of our April’s Fools Day celebrations. The information contained is mostly fictional but with some parts that are actual truth, like the German use of Renault UEs and the Wurframen conversion.

After the fall of France in 1940, some 3,000 Renault UE’s were captured by the German forces. As the Germans always needed more items to equip their under-mechanised army, they started to use these Beute vehicles for their own purposes. Indeed, the Renault UE became one of the more common small armored vehicles in German service for a time. 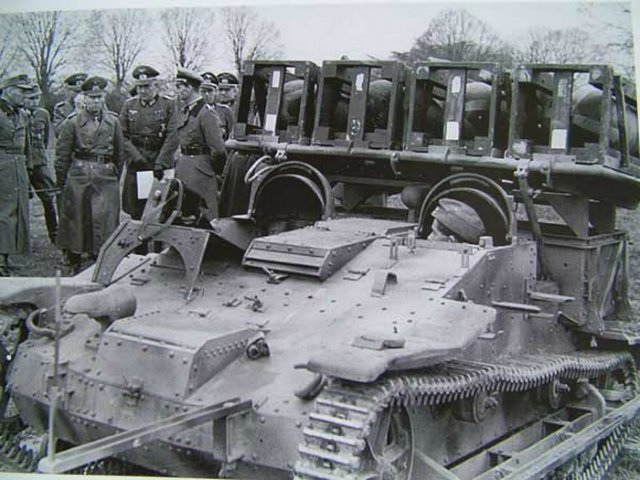 As the threat of the Allied Invasion loomed, German forces began to modify some of these captured vehicles into self-propelled rocket launchers mounting Wurfrahmen 40 28cm rockets on both the Renault UE and Hotchkiss H35. These saw service during the Invasion of Normandy.
After the war, the French began to look at re-equipping their army, and in some cases used captured German tanks such as the Panther as a stop gap. It’s during this time that a French designer working for Renault, Mr. Rennie Neufpierre, came across a German UE fitted with the Wurfrahmen 40. Its layout sparked an idea, and he began working on a concept which he presented to Renault. In 1959, the French Government became involved and the project received official funding for a study into the idea under the Finabel No. 83T86 requirement. Renault named this study Project Tigre. 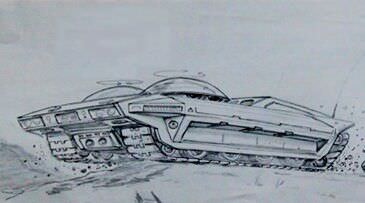 The Tigre copied the layout of the UE, with just two crewmen seated under separate domed cupolas that could rotate. The crew consisted of a Driver and a Commander who acted as a layer as well. Some of the bad ideas from the French armor development were copied over to this, such as the French insistence on having the entrance hatch on the rear of the dome, unlike contemporary vehicles which had the hatch on the roof of the cupola. Equally, the early war French tanks had incorporated binocular sights into their cupolas for the tank commander to use. This was also applied to Project Tigre. Communication between the two crew was again directly copied from the Renault UE, a series of colored lights were controlled by the commander to transmit movement orders to the driver’s position. 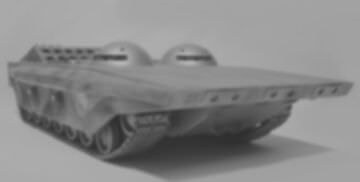 The model of the Tigre. The weapon system on Project Tigre was a unique design, consisting of a rack of eighteen cut-down Brandt Mle CM60A1 guns. Only one round was loaded in each gun, however, a full set of reloads was stored under the weapons rack. The breaches of the gun mortar were exposed on the lower side of the weapon rack. Thus, they could be reloaded by the crew sheltering behind the vehicle.The inspiration for this was tied to a French-Canadian improvised weapon system deployed in 1945. They mounted fourteen PIAT’s in a rack on the back of a Universal Carrier, which were discharged in two volleys of seven by pulling on a lanyard. In Project Tigre, the mortars could gimbal through a few degrees allowing the layer to aim his salvo, whereupon he could select either 3, 6, 9 or 18 rounds to be fired. This adherence to multiples of three was imposed on the project by the Renault management citing the French Tricolour and the Fleur-de-lis as both having ties to the number three, and thus was seen as a patriotic number.
The mortars themselves were fairly low-velocity weapons, only firing at 127 m/s, thus a three round burst was needed to help hit the target. Rounds provided were either HE or HEAT.

The End of the Tigre

After completing the study, Renault presented its findings to the Government in 1961. During the course of the study, they had created a model, even placing it into a short film to promote the idea. However, the French army was concerned about several features carried over from the pre-war tanks, the lack of modern communications and the excess weight required for the 18 guns, which limited the amount of armor that could be fitted to just 10mm, even if it was highly sloped. 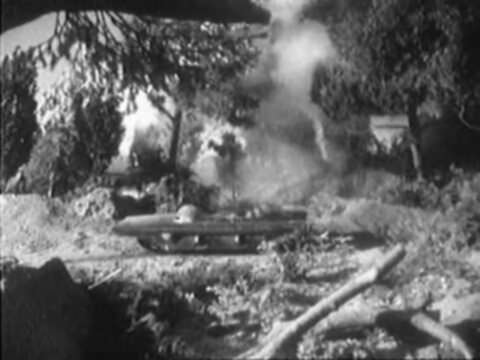 A still taken from the promotional film of the Tigre
In addition, the Tigre had a large overhang on the front of the tank, which previous French experience on the St Chamond had shown was an undesirable trait. Therefore, no further work was done and Project Tigre was buried in an archive. The exact fate of the model is currently unknown, however, the recent find of three wheels and one of the tracks of the models at the Saumur museum appears to indicate the model may have ended up there.

I wondered when this site would start to examine the cache of documents recently discovered at Fauconterre by Davies and Windsor.
18 cabinets filled with 101 detailed plans for tanks and aircraft, if I understand correctly.

“Mr. Neufpierre’s original sketch of Tigre” looks very much like taken from a Battletech-manual.

I might be wrong but I don’t think you guys have done a fake tank on ww1. I know it would be hard but any I would like to know if anything exists in ww1.