The AAC-1937 (Autometralladora blindado medio Chevrolet-1937), sometimes known as the “Chevrolet 6×4 1937”, was an armored car made by the Republican forces in Spain during the Civil War. It was, essentially, a copy BA-3/6 (although it closely resembles a BAI).
Its armament varied quite a bit – usually two machine guns (various models), but sometimes a French 37 mm (1.46 in) gun, and even cannibalized Soviet turrets with 45 mm (1.77 in) guns were used. Like many AFVs in the Spanish Civil War, it changed hands quite a lot, and saw service with Republicans, Nationalists, and even with the French and Germans during WWII. With such an impressive list of users, it seems odd that it is such an obscurity.

The Soviet Union had a major interest in Spain before the Civil War even began. The possibility of securing a satellite state in Western Europe would be excellent for Comintern. After the overthrowing of the monarchy in 1931, the radical left political parties, such as the PSOE (Spanish Socialist Workers Party), PCE (Spanish Communist Party), and unions such as the UGT (General Workers Union), and Anarchist CNT (National Confederation of Labor) were able to secure power.
Knowing that the balance between traditional, Catholic Spain, and modern, socialist Spain could be tipped one way or the other at any moment, the USSR attempted to influence the situation. After successive failed governments, and several elections, 1931-1936, whereby power swung from the far left to the far right, Civil War inevitably broke out between Republican forces (a conglomerate of left-wing parties and organizations) and the Nationalist forces (a similar conglomerate of traditionalist forces such as CEDA, Carlists, and the Falange, supported by much of the armed forces and Guardia Civil).
The Republicans desperately needed arms, as the Nationalists controlled half of available rifles, and two thirds of the machine guns and artillery pieces, thus giving them the upper hand. Worse still, due to an agreement of non-intervention from France and Britain, the only viable option was to buy from the Soviet Union (although small shipments were secured from France, it was far from sufficient). By this time, the Soviets were less concerned about receiving a new satellite state as much as they were about stopping the spread of Fascism.
By spending some of its gold reserves to pay for the aid, it is estimated that Spain received 242 aircraft, 703 artillery pieces, 731 tanks, 300 armored cars, 15,000 machine guns, 500,000 rifles, and 30,000 sub-machine guns from both Soviet and Comintern sources, as well as over 2000 Soviet personnel, mainly consisting of pilots and tank crews, but also engineers and military advisers.

By 1937, the German and Italian navies had control of, or were blockading, all Spanish ports, meaning that the USSR could not supply more tanks and armored cars to the Republicans. Knowing this, the Republican government turned to local industry to produced AFVs.
There was, apparently, a specification for a heavy armored car, and a number of prototype armored cars were made in April, 1937, generally based on the BA-6 design. One which the Republicans liked the most was a prototype of the AAC-1937. It was based on a Chevrolet SD 1937 lorry chassis, and produced at the General Motors Factory in Barcelona.
However, there was a problem – the Chevy SD 1937 only had two axles which was a problem for heavy armored cars, as the vehicle would not be stable enough. To fix the problem, a GAZ-AAA truck, taken from a damaged BA-6 was cannibalized, and the Chevrolet SD 1937 was modified to have three axles.
This was only made possible by the fact that Soviet lorries were, in effect, copies of American designs. As a result, the newly modified armored car was similar to the BA-6, but it was slightly more agile because it had a stronger engine with 10 hp more than its counterpart. 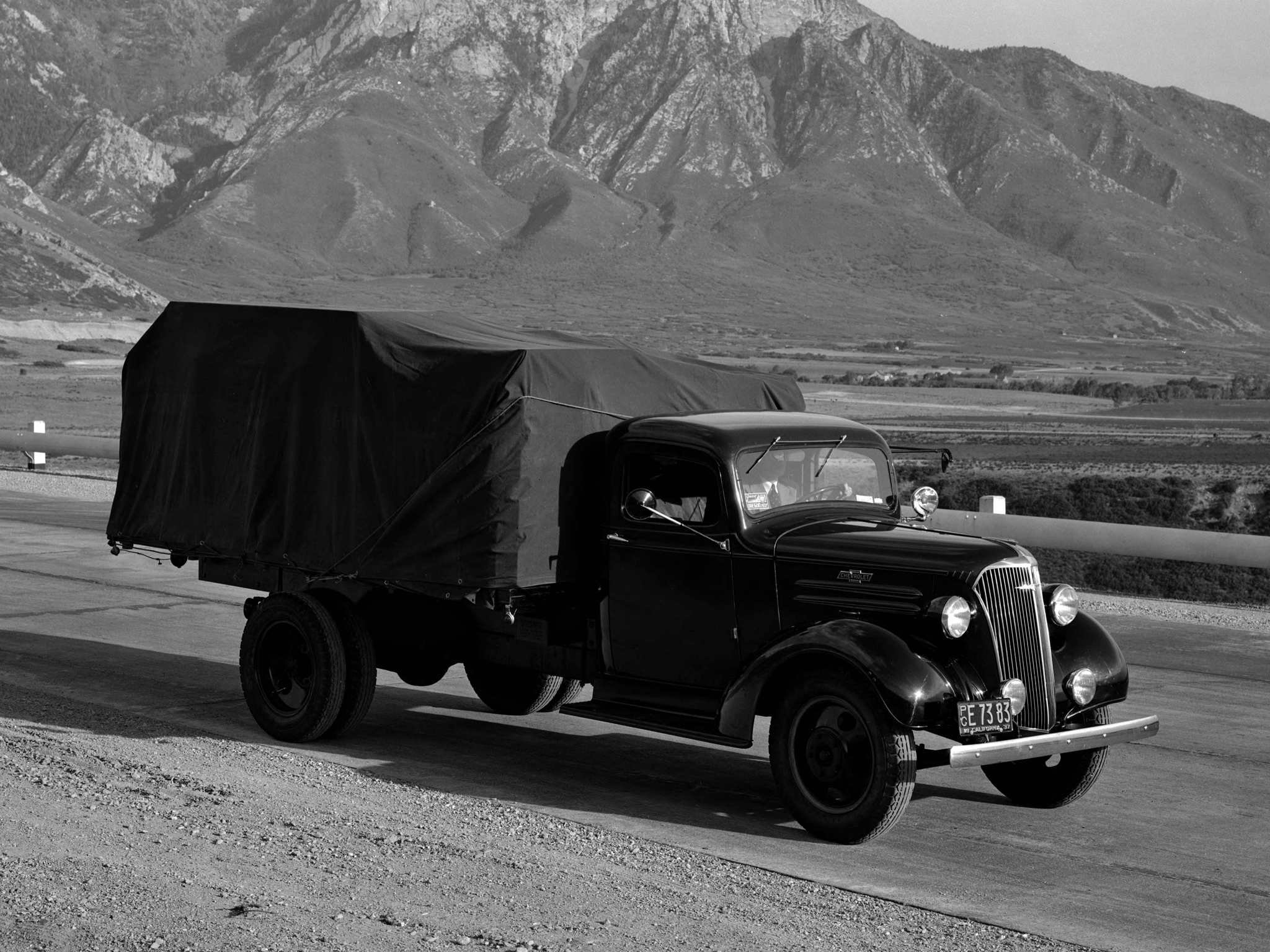 The original Chevrolet SD 1937 lorry.
The armor for the hull was made at a factory in “Altos Hornos de Sagunto“, Valencia; the same place where armor for the UNL-35 (a Spanish copy of the FAI / BA-20) was made. It was made from 8 mm (0.31 in) plates welded together. The bodywork looked like a typical Soviet armored car. The major differences were the engine access hatches, the tires, and the mudguards.
The AAC-1937 usually had a four man crew, including a driver, commander, gunner (to operate the turret gun/guns), and a co-driver (to operate the hull machine gun). However, the main armament and turret configuration seem have varied a lot. Some appear to have locally built BAI-like turrets (although not round, but welded from many plates), sometimes featuring a machine gun, and sometimes a machine gun and a 37 mm (1.46 in) Puteaux gun. The original configuration is unknown, however. Sources give the following suggestions:
1. Single machine gun (MG-13s, DTs, and Maxim guns being the most common), in what appears to be a locally built turret, fairly similar to the BAI turret.
2. Cannibalized T-26, BT, and BA-6 turrets – which there is photographic evidence for the AAC-1937 using.
3. Other sources also suggest that the original locally built BAI turrets were later rearmed with French 37 mm Puteaux guns, believed to be taken from old FT tanks. Photographs certainly show 37 mm guns, but whether they were originally designed to feature them, or were later upgraded to feature them, is a mystery. 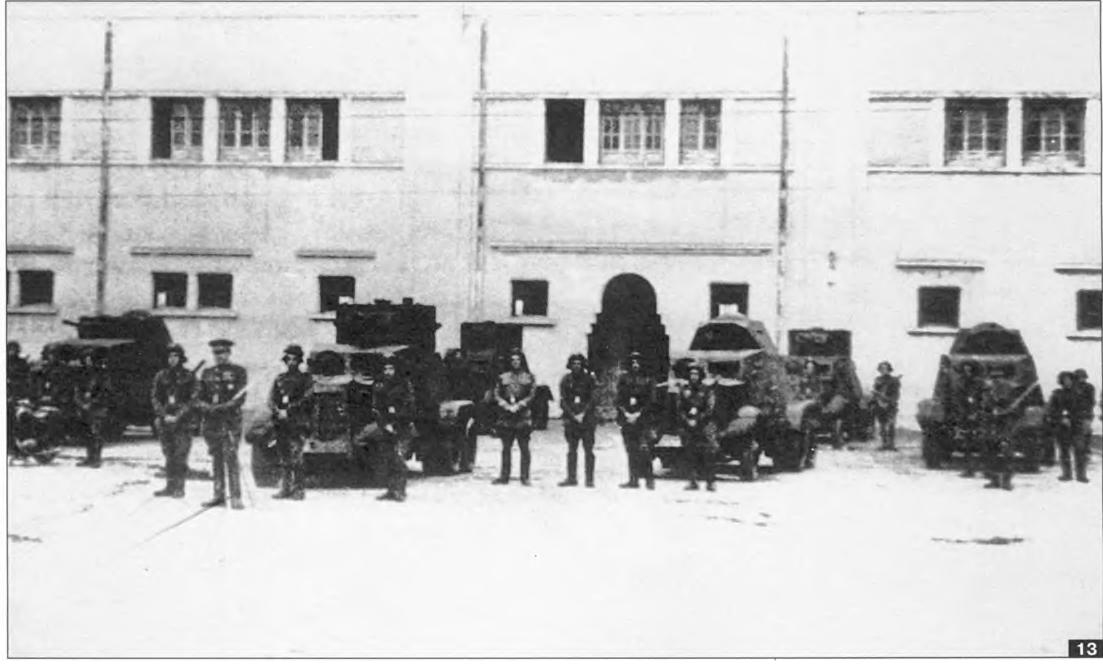 A variety of AAC-1937 models in Republican service, circa 1937. Some appear to have cannibalized BT/T-26/BA-6 turrets, and others appear to have only an offset machine gun in their locally built turrets.
It is most likely the case that their armaments varied from batch to batch – each batch dictated by what was available – Spanish armored cars of the period are not known to have been too well standardized. As mentioned, the original configuration remains unknown. Whilst it does make sense that these armored cars would follow the Soviet heavy armored car doctrine, and therefore feature a large caliber gun as the original, the Spanish also followed a more European doctrine of just having machine guns.
In any case, AAC-1937s, in their various models, started leaving production lines in April 1937. Four were made every month, but by March, 1938, there was a shortage of steel armor plates as a result of the Nationalists dividing Republican held territory in two. Small numbers were made until February, 1939, when Catalonia was captured by Nationalists. A reported 70 were built in total, but perhaps as many as 90, according to combat data. 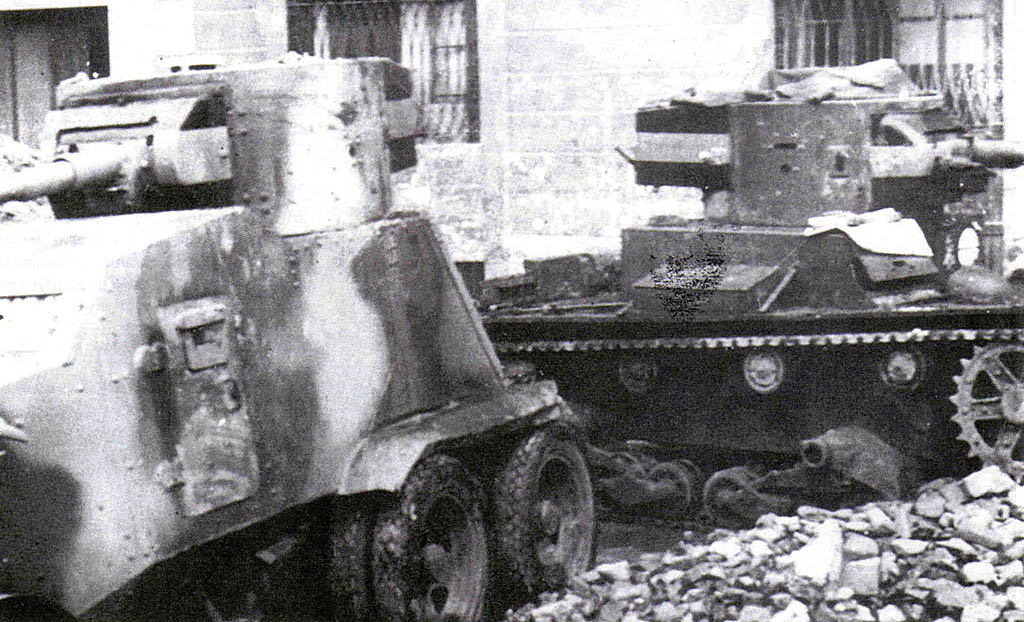 Nationalist T-26 and AAC-1937 with a T-26 turret (and original Republican hull colors). They both appear to be knocked out. Date and location unknown.

Parallels with the UNL-35 do not end with the design process. Similar to the UNL-35’s combat history, the first piece of combat that the AAC-1937s saw was during the suppression of an anarchist uprising in Barcelona in May, 1937. After this, they were in service with the Republican 1st (Catalonia) and 2nd (Center South) Armored Divisions. During the war, an estimated thirty were captured by the Nationalists. They were reportedly rearmed with MG-13 machine guns.
Fighting in Spain might have been troublesome for a heavy armored car. If the UNL-35 is anything to go by, they would probably suffer from engine overheating. However, it must be remembered that these were not crudely built improvised gun trucks which would be mechanically stressed by the weight of their armor. These were fairly professionally built with high quality materials – in effect, they might have been mechanically better than their Soviet counterparts!
With the Nationalist victory in the Catalan Offensive in February, 1939, AAC-1937s crossed over into France with retreating Republican forces. Those which were left operational in Spain were used by the Nationalists until the 1950s with Cavalry units. 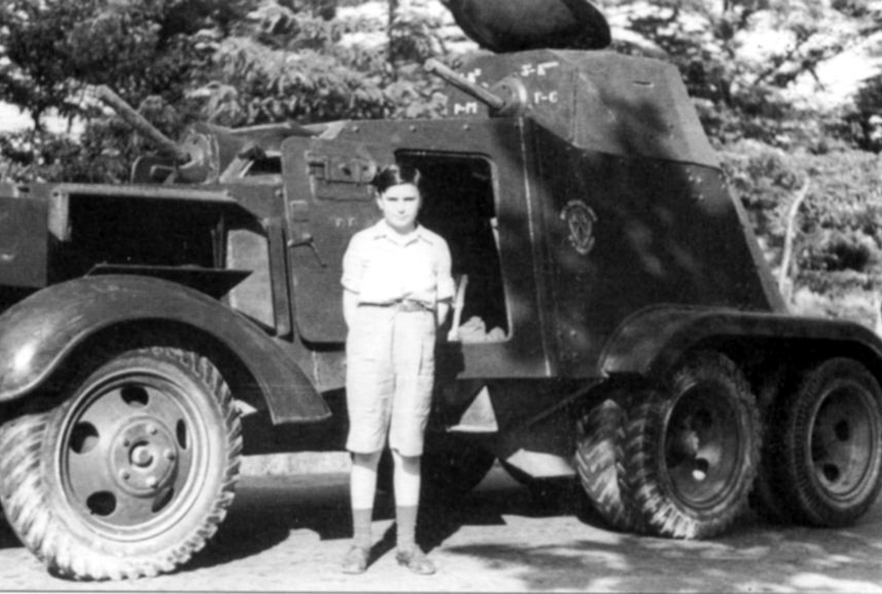 AAC-1937 in Nationalist service, possibly post-Civil War. The machine guns appear to be dummies. The hull marking appears to be a Cavalry unit.
The total number of those captured by France is unknown, but probably few more than twenty. At some time around May, 1940, France took out roughly twenty AAC-1937s from storage to fight against the Germans. According to photos, they saw very limited service, seeing as though France was quickly defeated.

The remaining AAC-1937s (believed to be about thirty) were then used by the Germans for security operations in the Eastern Front. Designated “Pz.Kpfw 612“, many of these received nicknames, such as “Tiger“, “Cheetah“, “Leopard“, “Jaguar“, and “Panther“. Various models were used by the Germans, mainly comprising of their own field conversions such as: A troop transporter (by removal of the turret), a SPAAG (by replacing the turret with an AA dual-MG 34), and one modified to fit an MG 34 in the turret. Sources also discuss rail conversions, and a command version, but photographic evidence of these has not been seen by the author.
Germany deployed their AAC-1937s on June 22nd, 1941, in reserve duties near Moscow. However, the fighting at Moscow was brutal and as a result, these armored cars were called upon for front-line duties. They were knocked out in a matter of days.
At least three AAC-1937s reportedly saw service at Leningrad with the Division Azul, but were also quickly lost.
By winter, 1942, it is believed that there were three remaining AAC-1937s in German service, which were sent for security/anti-partisan duties, although exactly where is unclear. Probably in the RSFSR. 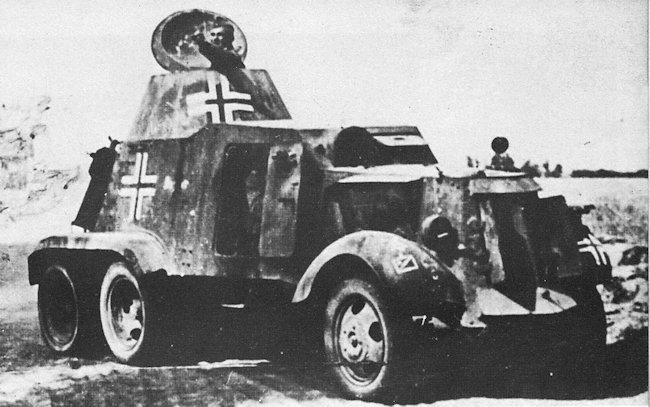 German Army, Spanish Built AAC-1937 armoured car named ‘Jaguar’ captured by Soviet forces. As taken from “Tanks Illustrated No. 16, Operation Barbarossa” by Steven J. Zaloga and James Grandsen. Grandsen suggests that AAC-1937s were purchased by Germany and “presumably used by Brandenburger units to confuse Soviet forces” but this does not seem to be true at all.

A Soviet BAI, for comparison.

Republican AAC-37 in green livery. Turrets are believed to have just been armed with single machine guns, originally.

Nationalist captured AAC-37 with a T-26 turret. Some others received BT turrets.

French camouflaged AAC-37 as shown in a depot, possibly 1940.

Beutespähpanzer AAC-37(f). About 20 captured were used in the Eastern Front, some were named after animals, like this “Jaguar”. armed here with a MAC Mle 1931 machine gun. 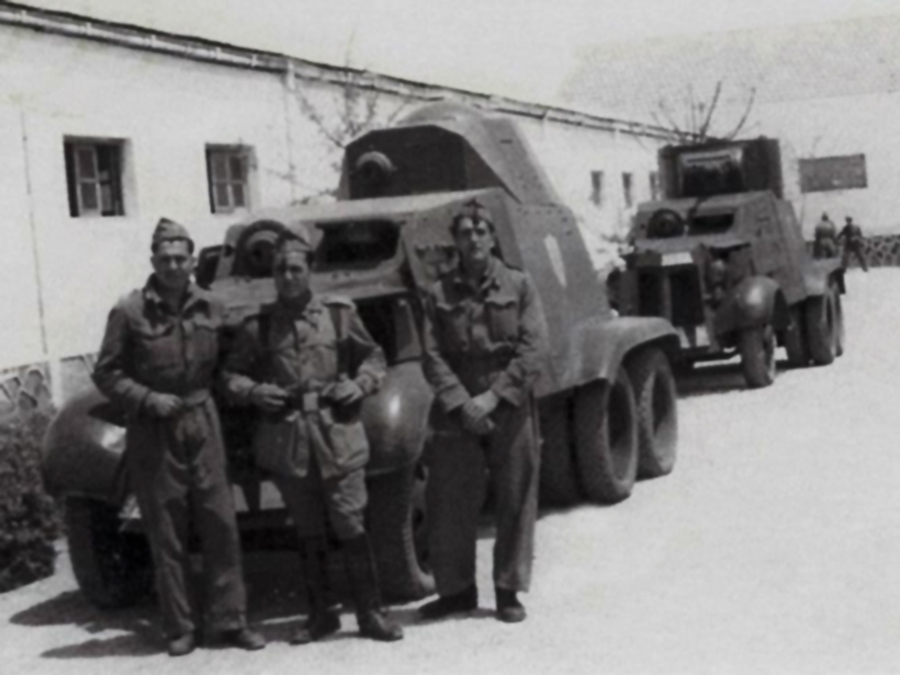 AAC-1937s in Nationalist service. The first one did not have a 37 mm gun, just an off-set machine gun. The one behind appears to be a BA-6, as it features a BT turret, but the differently shaped and notably lower placed mudguards indicate this to be an AAC-1937. 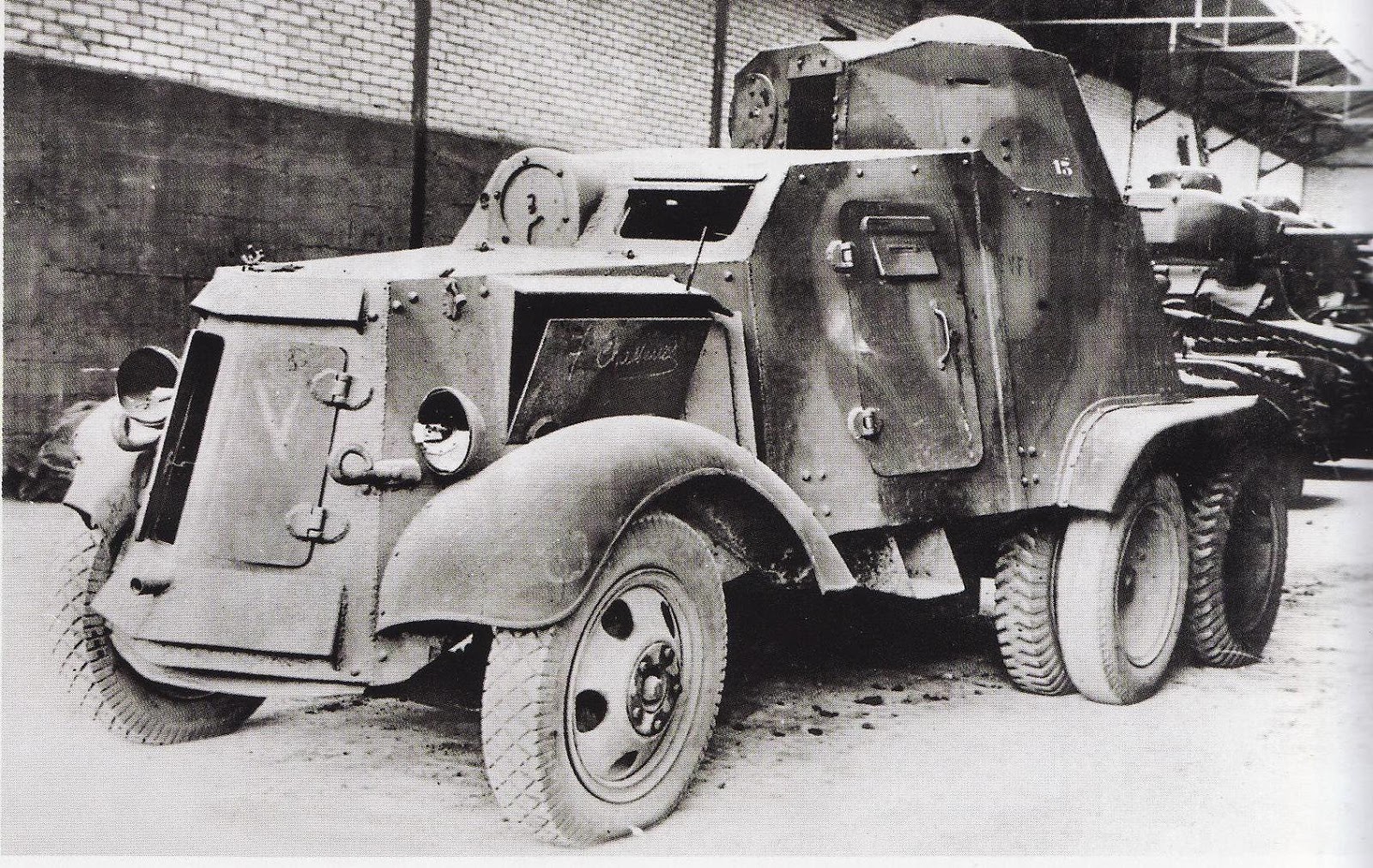 Camouflaged AAC-1937, in a storage warehouse in France. French tanks can be seen behind it. Possibly in original Republican colors. 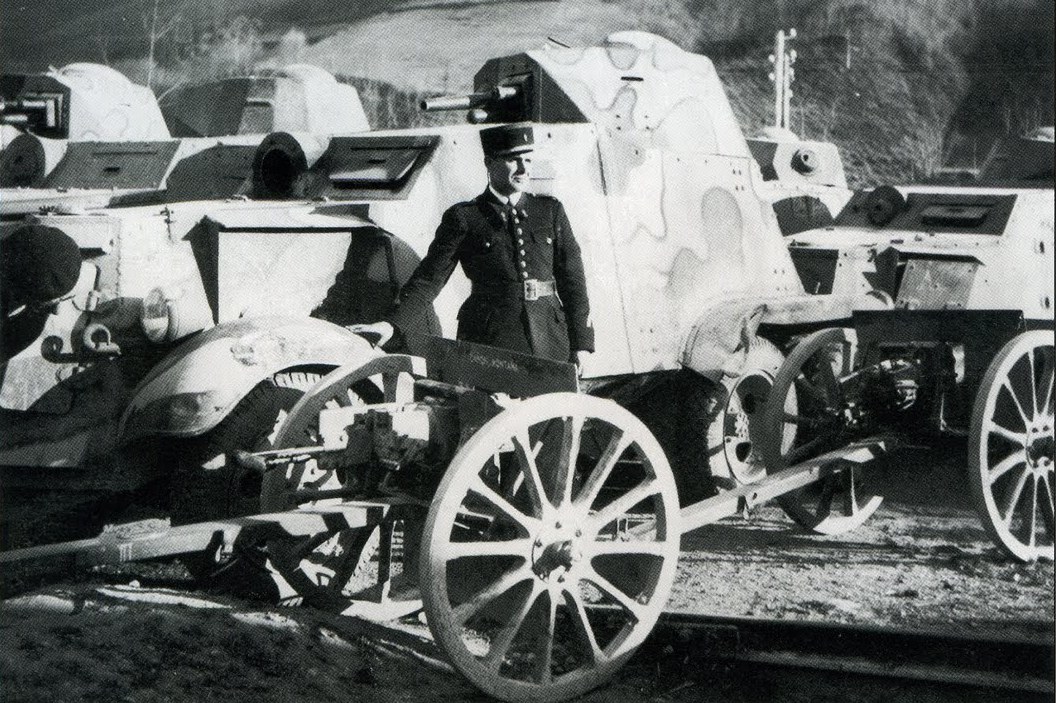 AAC-1937s in France- possibly 1939, shortly after they were captured from the Spanish Republicans. However, the camouflage appears more like a French type. 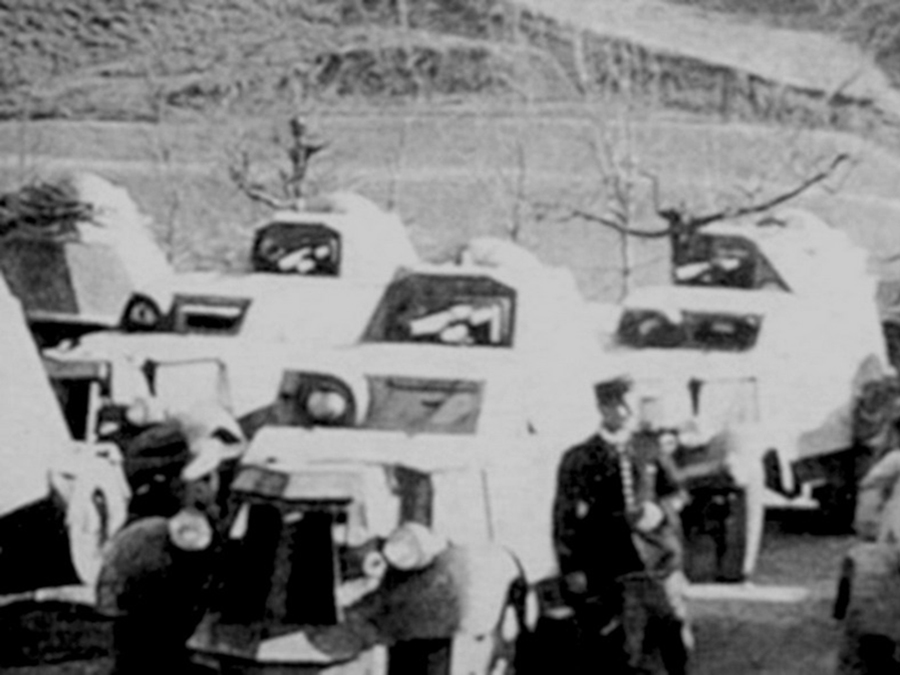 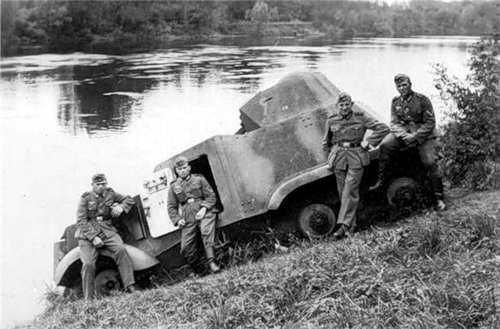 German soldiers pose with a French AAC-1937 – one of the few to actually see combat with France. Possibly in original Republican colors. 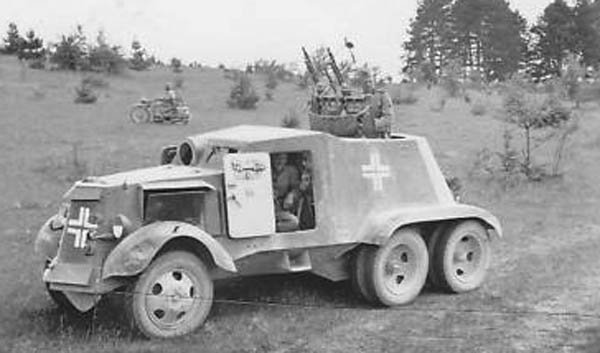 German AAC-1937 converted into a SPAAG with twin AA MG-34s. The different wheel shape and lower mudguards are the only real giveaway that this is not just a BAI. 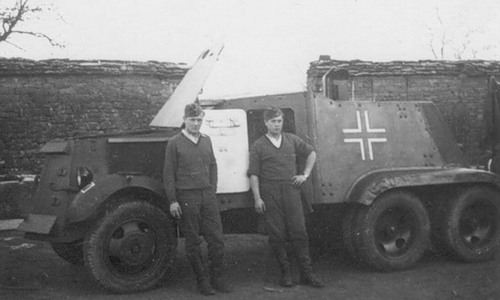 German conversion of an AAC-1937 into a turretless vehicle. This photo was likely taken around Moscow, winter, 1941-2. 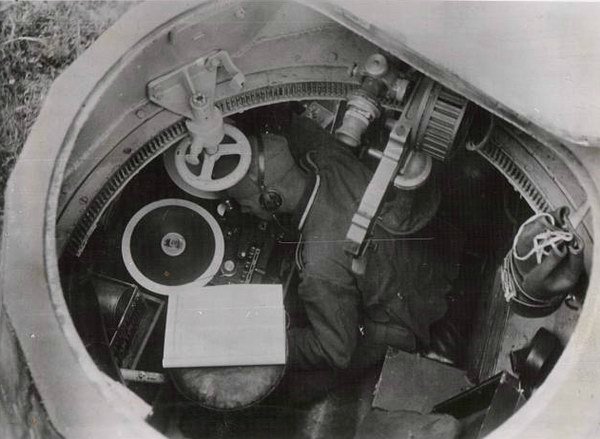 Interior of a German AAC-1937 turret. The MAC Mle 1931 machine gun is distinctive with its round drum on the side of the gun.

Short footage of AAC-1937 “Jaguar” in combat on the Eastern Front. Probably near Moscow, 1941.

Good artycle, but the term “spaniard” is an insult (A british one actually) and is not apropiate in this text.

The “artycle” was corrected, thx