During the early stages of World War II, the rampaging Wehrmacht began running into some hardened British steel among the softer skinned Crusaders and Vickers Lights. This was of course, the famous Queen of the Desert, Infantry Tank Matilda Mk.II, and nothing short of an 88 mm cannon would stop one.
Witnessing this excellent, unyielding armor first hand, the Wehrmacht were more than happy to capture any operational Matildas for themselves.

In fighting in France and North Africa, some of the captured Matildas were turned on their original operators. A tank under the name of “Dreadnought” is one such vehicle frequently seen in photographs from the time.
A few of the vehicles were sent back to Germany for analysis. This practice of sending captured equipment back to HQ was the norm in all armies. The tanks were mostly used for training purposes in their standard configuration, but one vehicle, previously identified as No. 111, was converted into the 5 cm KwK 38 L/42 auf Infanterie Panzerkampfwagen MK II 748(e).
The letters Kwk were an abbreviation for the German word Kampfwagenkanone (Combat vehicle gun – Tank gun) It was nicknamed “Oswald” by its operators.

Here “Oswald” can be seen taking part in training exercises, note the name “Oswald” on the fender. Source: – beutepanzer.ru

The conversion of the “Oswald” was caused by the Hochsee-Lehrkommando (High Seas Instructional Command). For a time, it was trained on in it’s original form. It later underwent some modifications. The tank’s hull and power plant remained the same as the standard Matilda II.
The major modification was the removal of the 2 pounder main armament and the turret, being replaced with the 5cm KwK 38 anti-tank gun. The gun is thought to have come from an irreparable Panzer III. It was pivot-mounted, protected by a specially hand-made shield which went over the weapon’s standard gun shield. Two 7.92 mm MG 15s were mounted atop this. 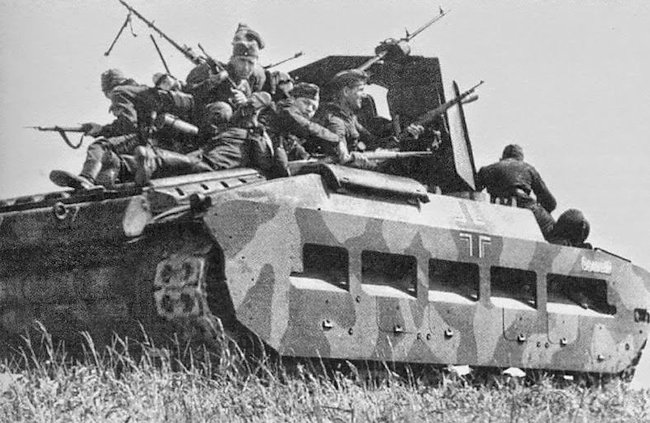 Infanterie Pz.Kpfw. MK II 748(e) Oswald transporting troops during a training exercise
Quite why the turret was changed out is unknown, it is quite possible that the supply of 2-Pounder ammunition ran out and, for obvious reasons, it was easier to resupply with 5 cm shells. Also, the extremely tight turret of the Matilda would’ve made it ill-suited to training purposes. The open space the modification granted would’ve made training, and guidance of the training, a lot easier.
The only other modifications were cosmetic. It was repainted in German camouflage and markings. The name “Oswald” was stenciled onto the track guard above the front left idler-wheel. 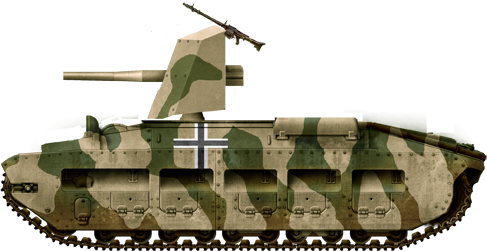 Rendition of the Oswald

Oswald on the back of a PiLaBo.41, No. 504, during training exercises. Source: – beutepanzer.ru

Training in the Wehrmacht

This particular Matilda is believed to have served under the British Army in North Africa before its capture, and bore the serial number “111”. The vehicle does, however, have raised suspension, a feature not continued after the debacle in France 1940, so it may well have been captured from the BEF.
Almost untouched, the tank came into German possession at some point in 1942. It was transported back to occupied Holland. Here, it was handed over to the Hochsee-Lehrkommando in Terneuzen where it underwent its modifications. It was then used to train loaders and take part in combat training. It took part in Operation Sea Lion invasion training.

It is unknown what happened to the “Oswald”, it is possible that it was used against the allies as Holland was liberated. Destroyed in this action, or scrapped, it didn’t see much action during the rest of the war and does not survive today.
An article by Mark Nash

Hi, found another mistake in here, very first paragraph.
“This was of course, the famous Queen of the Desert, Infantry Tank Matilda Mk.II, and nothing short of an 8.8 mm would stop one.”
An 8.8 millimeter Flak AA cannon? That’s a rather puny weapon, isn’t it? Did you mean to put the “8.8 centimeter” instead?

Hi,
Thanks for another interesting article. I’ve always had a keen interest on armored vehicles and always though i was some kind of an “armchair-expert” on the area yet week after week you keep on bringing new weird vehicles which i had no idea even existed. Very entertaining, educational and humiliating 🙂
One minor correction to the article, though: on second photograph (“Oswald on the back…”) the vehicle on that German ferry is actually a LWS (Landwasserschlepper), a German WW2 amphibious vehicle. Both Wikipedia and achtungpanzer have minor articles about that obscure but interesting vehicle. Any new info you could get on it would be welcomed.
Once again, congratulations for your excellent site.

Thanks, Mate! Many more strange vehicles to come!
Don’t worry we know the vehicle at the front is the LWS, Oswald is to the rear of it, the only visible part being the gun shield.

Oh crap…
Apparently i need to have my eyesight checked. I assumed that gunshield was part of ferry’s integral armament (many German ww2 ferries carried impressive armaments: quad-20mm’s, 88’s etc.) and i never ever realized there was another vehicle stealthily hiding onboard…
Well, another remainder for me not to comment hastily on forums.Not the first one unfortunately 🙁

Hello, SavageChicken!
Well, we all get some stuff wrong sometimes. And discussing it and realizing you were wrong is a normal part of learning new things!
All the best!

” … replaced with the 5cm KwK 38 anti-tank gun. The gun is thought to have come from an irreparable Panzer III. It was pivot-mounted, protected by a specially hand-made shield which went over the weapon’s standard gun shield.”
In 1942 the Panzer III were upgraded to long 5 cm L/60 gun. Combat engineers used the surplus short 5 cm L/42 guns on naval style pivot mountings to arm their boats, ferries and landing craft. The Lehrkommando would simply drop one of those gun assemblies onto the Matilda.

Actually in 1942 the Germans where still producing the L/42 and arming their panzer III’s with it so its not far fetched that a Panzer III would still be produced with one of those cannons in 1942 or 1943, this was probably due to the Germans accidentally forgetting to cancel its production for over 2 years.

i remember reading about this tank in a magazine article, many decades ago. The tank’s serial number identified it as one of the 9 Matilda IICS tanks sent out with the BEF.

“The vehicle does, however, have raised suspension, a feature not continued after the debacle in France 1940, so it may well have been captured from the BEF. Almost untouched, the tank came into German possession at some point in 1942”

Did the Germans capture the tank in 1940 or was it discovered in France in 1942?