The Renault ZB was essentially a lengthened test (and later, export) version of the AMR 33 fitted with a more versatile suspension type. The suspension type influenced later designs, such as the Renault R35, but the Renault ZB was rejected for French service. However, in 1936, the Kuomintang and Yunnan Provincial Government ordered sixteen vehicles which appear to have served in Burma in the early 1940s, where they were presumably lost.

As early as 1934, Louis Renault realized that the AMR 33 was in need of modernization. The engine was one concern, which was replaced with the more powerful Nerva Stella 28 CV engine, and it was also moved to the rear of the vehicle instead of the front. Testing showed that the vehicle could hit speeds of up to 72km/h, with 48.5 km/h as an average road cruising speed. Whilst impressive, officers pointed out that the engine, originally used for a sports car, was too delicate, and was replaced with the Renault 432 22 CV 4-cylinder engine, which was originally used for commercial buses. With a weight of just over five tonnes, the vehicle could hit a maximum speed of just under 64km/h, and an average cruising speed of just over 35km/h. An order of 92 was placed on 3rd July 1934, and was named AMR 35.


However, there was another upgrade to be done concerning the suspension. The AMR 33’s suspension was intended to be used for the AMR 35, but was considered rather delicate and unreliable for cross-country driving. Moreover, the oil shock dampeners were rather maintenance heavy, and therefore quite unsuitable for military service. As a result, Renault began to work on a total redesign of the suspension, which led to three different types being developed, tested on AMR 35 chassis number 79758.
One type had the idler wheel on the ground, which was rejected. The second type had two bogies and five roadwheels, and the vehicle was known as the Renault ZB. This suspension type later developed further and used on the Renault R35. The third suspension type, mounted on the Renault ZT, was similar to the ZB, except it only had four roadwheels, and one bogie, and it was accepted for service.

According to “World War II and Fighting Vehicles: The Complete Guide” by Leland Ness, in March 1936, the KMT ordered 12 Renault ZB (which he refers to as AMR-ZB). Half of these were armed with 37mm SA-18 guns, and the other half had 13.2mm Hotchkiss M1929s. Included in this order were 1500 HE shells, 1500 HE tracer shells, 3000 AP shells, and 300 practice rounds. Four more were ordered by the Yunnan Provincial Government a few months later, which were apparently all armed with 13.2mm Hotchkiss M1929 machine guns.
These were likely ordered because the Germans, who were closely allied to China (read more here), were unable to meet the demands of the Chinese armed forces, and thus the KMT began searching for other military hardware suppliers. France had previously sold vehicles to China – as early as 1919, they had sold Renault FTs to Warlord Zhang Zuolin (Chang Tso-lin) and later sold some to Chiang Kai-shek’s Kuomintang in 1928.
Yunnan received their vehicles in October 1938. The KMT’s tanks were shipped to Haiphong, French Indochina (now Vietnam), but the Japanese applied pressure to the French government, and they were not delivered immediately. Two vehicles finally arrived in China in February 1940, and another eight in June 1940. The other two are unaccounted for. The French also sold the KMT an estimated ten modified Renault UEs with 7.7mm machine guns in August 1936, which reached China in 1940 for the same reasons.
The Renault ZBs were apparently used by the Chinese Expeditionary Forces in Burma, but further information is unclear. One photo shows a Renault ZB with 13.2mm Hotchkiss machine gun in Burma, 1942. These vehicles are likely to have been lost or abandoned in Burma, as they are not known to have taken part in the Chinese Civil War (1945-1949). 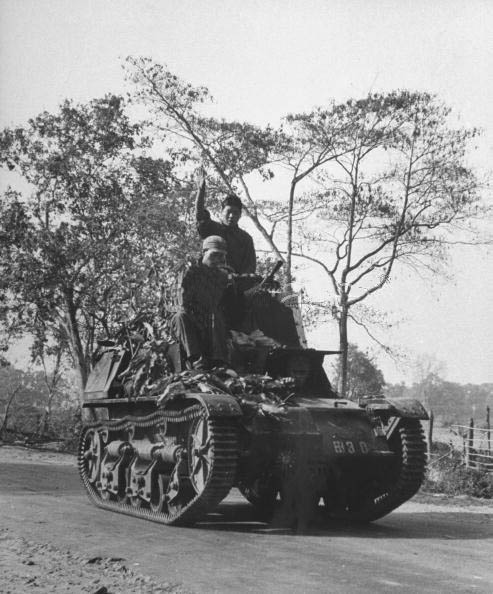 Renault ZB “30” with Hotchkiss M1929 (a 13.2mm machine gun) of the Chinese Expeditionary Force, Burma, 1942. The vehicle appears to be camouflaged by shrubbery. 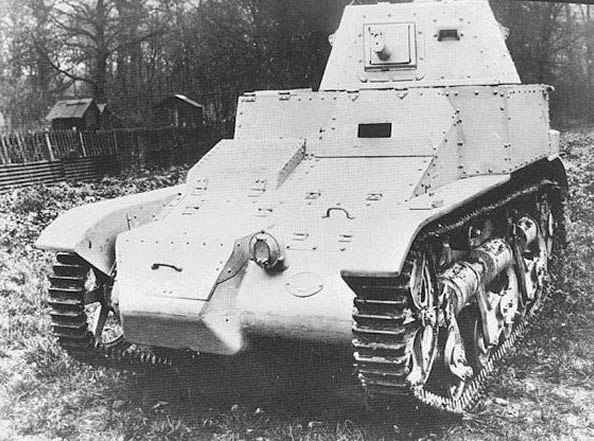 Renault ZB, reported wrongly by some sources to be in China. This is actually the trial vehicle in France in 1934.

look pretty short for the 13.2mm Hotchkiss.
those are AMR.35 with the 13.2mm Hotchkiss http://www.loutan.net/olivier/wp-content/images/2014/08/Renault-AMR-35-type-ZT-05d.jpg
we can see the differense of size with the gun on your picture. it probably a simple LMG rather than 13.2mm

The first photo shows what looks like a 13.2 mm machine-gun.
For the third photo, you may be right, it looks too small. I contacted the author.

for what i see, the barrel is too short to be a 13.2mm. it seem to be a russian DP 29 MG. China was know to refit this mg on many tanks such as the Panzer I
https://en.wikipedia.org/wiki/Degtyaryov_machine_gun