A single Canadian Army tank battalion had been authorized for deployment on the WW1 Western Front, but the Canadian tank crews in the UK were not trained in time to see action before the war ended on 11th November 1918.
This early Royal Canadian Amoured Corps was demobilized in 1919. During the Winnipeg General Strike, the Canadian Government looked into buying some tanks to be deployed on the streets, after reading about the American and British Governments using tanks as a deterrent in the 1930s Depression era worker strikes. The public unrest in Winnipeg finished before any tanks were delivered. 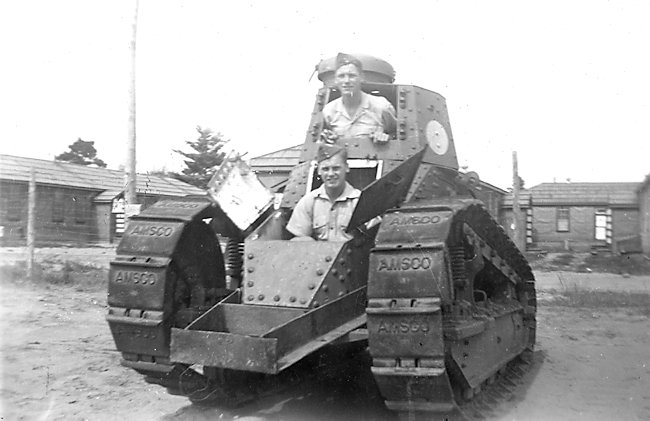 War is coming. We need tanks

In 1938, the Canadian Army realized that they would need to reform the Tank Corps. Tank Battalions began to be formed from established Infantry regiments.
A Canadian Tank School was opened at Camp Borden in Ontario. Later, its name was changed to the Canadian Armoured Fighting Vehicles Training Centre (CASF). It still did not have lots of tanks in which to train future tank crews. A few tracked machine gun carriers, a British Light Dragon Mk III and two Vickers light tanks were all it had at its disposal.
The tank school devised a training device that mimicked a tank turret, which jolted and pitched like one in a tank crossing open country. Students could fire an air-rifle at targets on a sand pit to simulate firing a tank gun. They would look through telescopic sights to find the target, whilst using hand wheels to rotate the turret. Replica pill boxes in the sand would light up simulating the flashes of machine guns firing at the tank. A pulley system would move the board up and down and pull small tank targets across the sand. It was called ‘Rypa’.
In late 1939, when war in Europe broke out, the School was slightly better off: it now could boast that it had 14 British Vickers Mk VIB light tanks on its strength. This was not enough. The Canadian AFV Training Centre at Borden was expected to train 200 men at a time. They needed more vehicles. 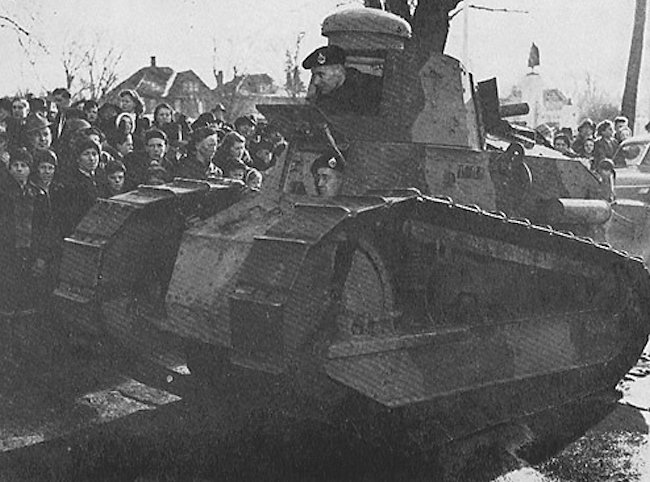 Some of the Canadian M1917 were given a camouflage livery. When being driven along a road the gun was turned towards the rear so the commander could open his hatch. The tank crew are from the Ontario Regiment. They are on parade in Oshawa. The WWI cenotaph on Simcoe St is in the background.
In June 1940, Colonel Frank Worthington informed the Canadian National Defence Headquarters of a number of surplus M1917 6-ton tanks in the United States. The U.S. agreed to sell 250 of the tanks. Colonel Worthington ordered 236 M1917 tanks on 21st September 1940, in order to increase the amount of tracked vehicles available to train Canadian Army tank crews.

At the time of the deal, the United States was a neutral nation and could not officially provide weapons to any of the combatants. The Canadian Government was sold these old WW1 era tanks as ‘scrap metal’. They paid the going rate for scrap metal: each tank only cost $240US. The first M1917 tanks arrived at camp Borden on 8th October 1940, transported by train from a parking lot at Fort George G. Meade in Maryland. Tank crew training could now start in earnest.
The Canadian opposition party heard about the deal and tried to embarrass the Government in Parliament and raised a question about the purchase. They received the formal reply that the train delivering 1,500 tons of scrap metal had arrived at the Camp Borden Iron Foundry. No further questions were asked. 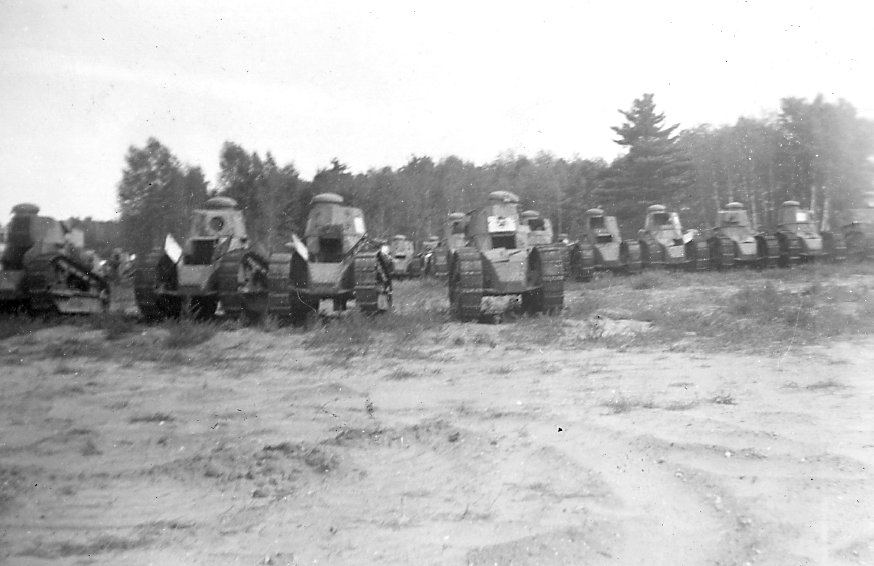 The shock of the fall of France and the success of the German armored divisions led to the formation of the Canadian Armoured Corps in August 1940. There were lots of recruits that needed to be trained as tank crews. For nearly two years, the M1917 proved to be a useful tank training vehicle. The M1917 6-ton light tanks lacked suspension, so gave a very hard jarring ride when students drove across country. They had a tendency to suffer from mechanical breakdowns frequently and some caught fire. The upside was this gave the students more practical experience in tank maintenance and repair. Tank crew students had to learn flag and hand signals, as the tanks were not equipped with radios. 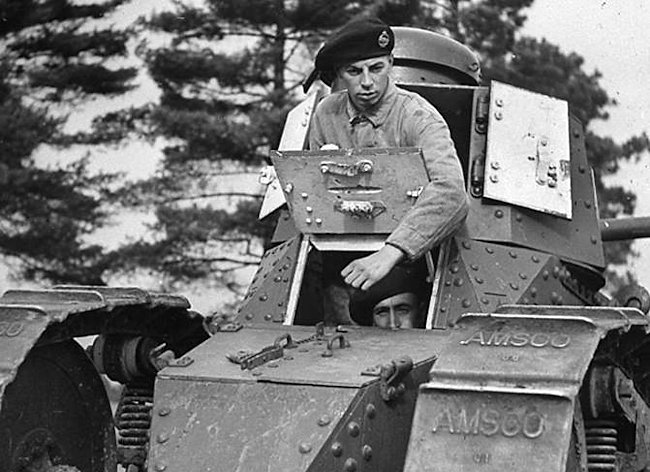 Canadian M1917 tank crew under training at Camp Borden. Judging by the soldiers’ berets, they could be the Essex Regiment (Tank) from Windsor, Ontario, Canada.
The 9 mph (15 km/h) slow speed of the M1917 6 ton tank made tactical training difficult, and the main function of the vehicle was to familiarize crews in driving and maintaining tracked vehicles. Tank gunnery was also taught using the caliber .30 (7.62 mm) Browning M1919 tank machine gun and the 37 mm (1.46 in) M1916 cannon.
Many Canadian tank crew drivers were recruited from the tracked vehicle cat-skinner’ drivers working for western Canadian construction crews, drag-line men, clamshell men, bulldozer drivers, and farm hands from the farms of Manitoba and Saskatchewan, who knew how to look after their tractor engines. If one of these men was working in a part of the country over 20 miles (32 km) from the nearest town, he could not call a garage when something went wrong. He had to fix it himself. 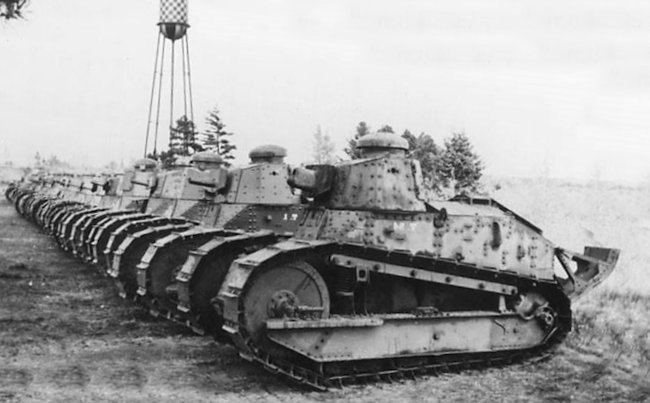 The first M1917 tank in the photograph is armed with a 37 mm M1916 cannon, whilst the others are fitted with .30 cal Browning M1919 tank machine guns.
The Canadian tank crews were trained using a very unique method. Camp Borden was off limits to civilians, but it was full of wildlife. Local farmers and hunters would ignore the no entry signs to hunt bear, deer, elk and moose. The tank crews were instructed to hunt these hunters using their tanks and pretend that they were enemy tanks. Live ammunition was not used against these poachers.
Colonel Worthington mentioned to his son, ‘One of my cherished memories is walking down the concrete road through camp to the one-room school near the Air Force area one fall day, and seeing a Renault tank emerge from the bush area with a deer carcass draped over the tank’s gun, and two disgruntled poachers in plaid shirts marching in front with their hands on top of their heads. Pretend prisoners of war. The soldier in the tank’s turret was beaming like an Olympic champion. The officers’ mess and the sergeants’ mess subsequently dined on venison.’
In 1943, many of the M1917 tanks were sold off to private industry and to farmers. There are only two Canadian M1917 6-ton light tanks left: one is located at the Canadian Forces Base Museum at Borden, Ontario, Canada and the other is on display at the Canadian War Museum 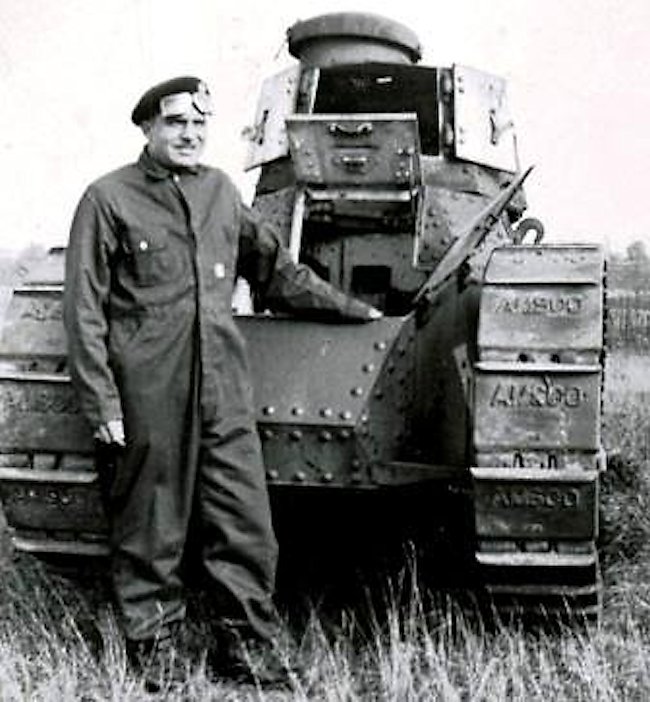 Andrew Butcher, Canada – I spoke to a fellow whose brother off-loaded these at the railhead, and he used them in training. Broke down all the time, they’d head out with five and come back with two. Good maintenance trainers! 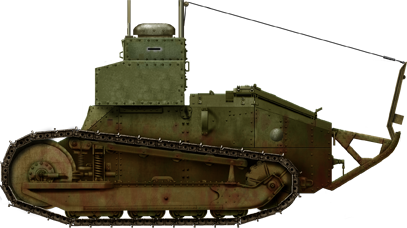 M1917 Signals Tank with non-rotating turret, that had room for a radio and maps. It did not have a weapon. 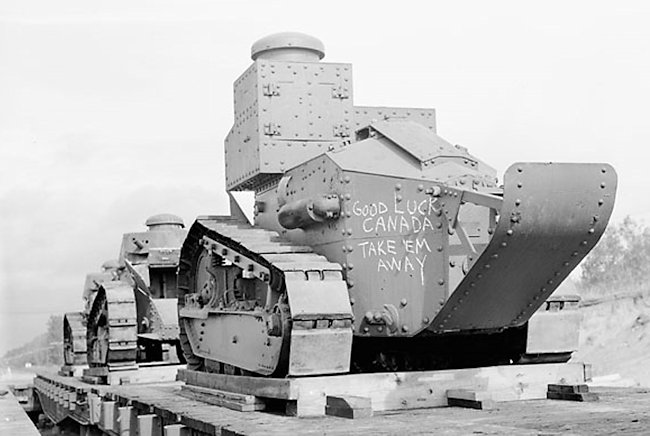 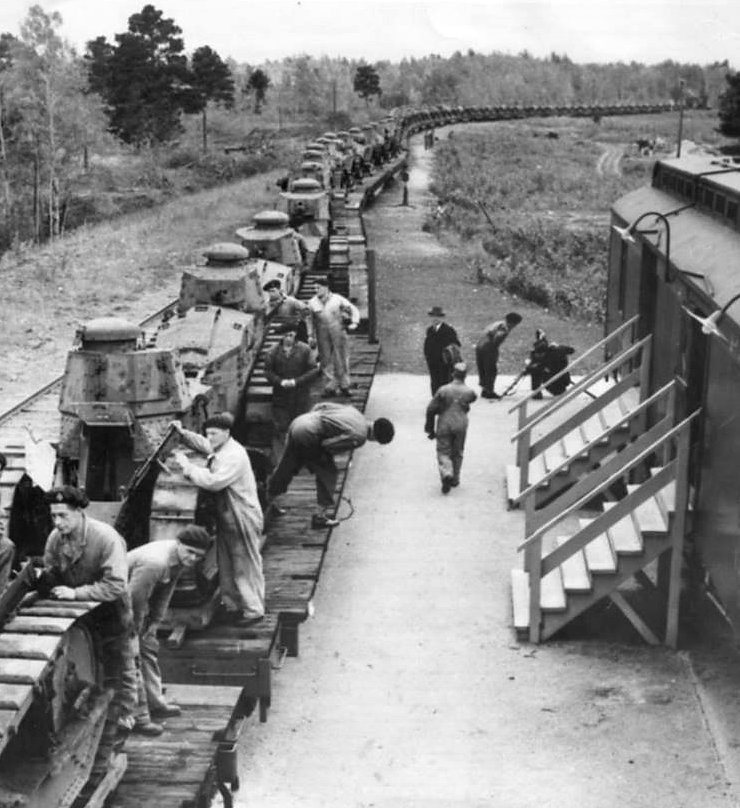 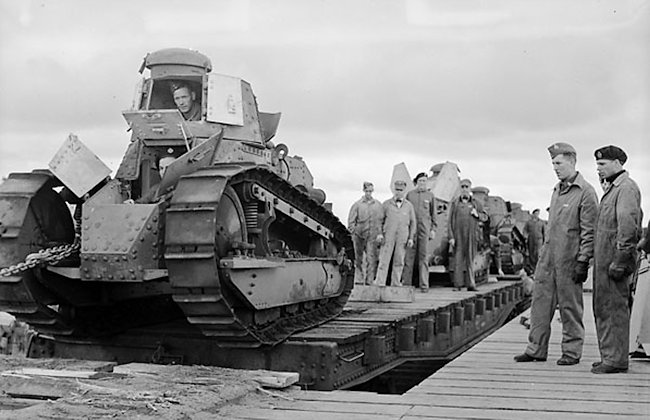 US M1917 light tanks arriving in Canada October 1940. They are being towed off the railway flat back wagon. 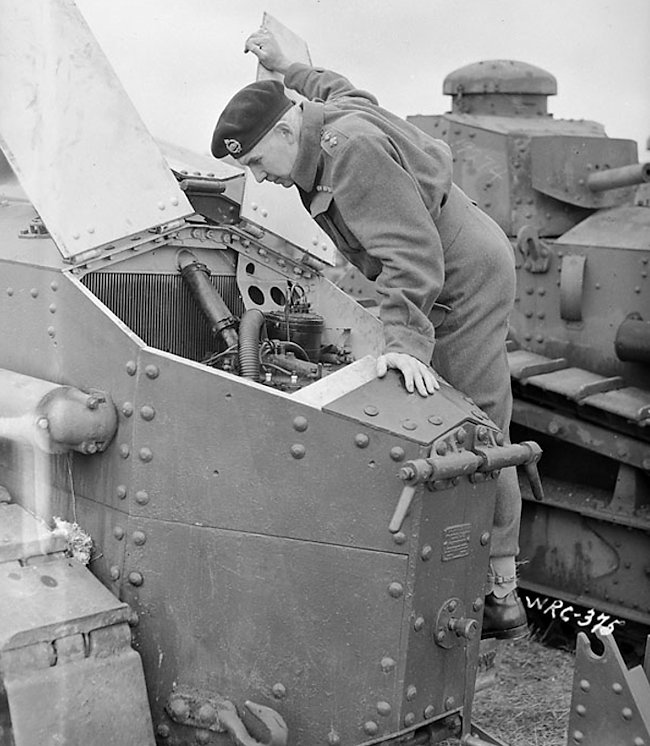 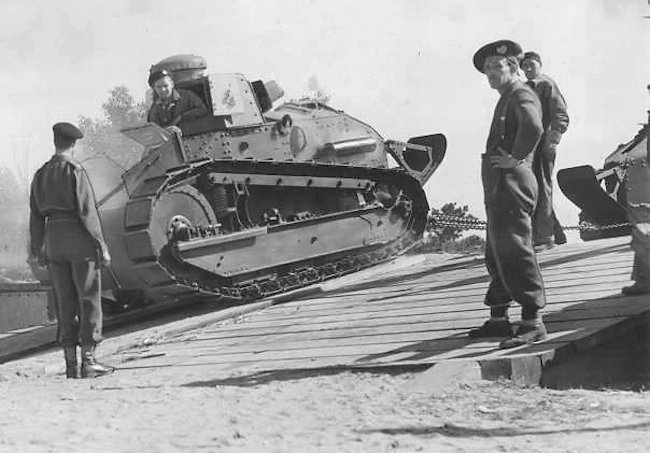 Canadian M1917 light tanks being unloaded from the railway flatback trucks. Not all of the tanks could move under their own power. Some had to be towed off by other tanks using chains. 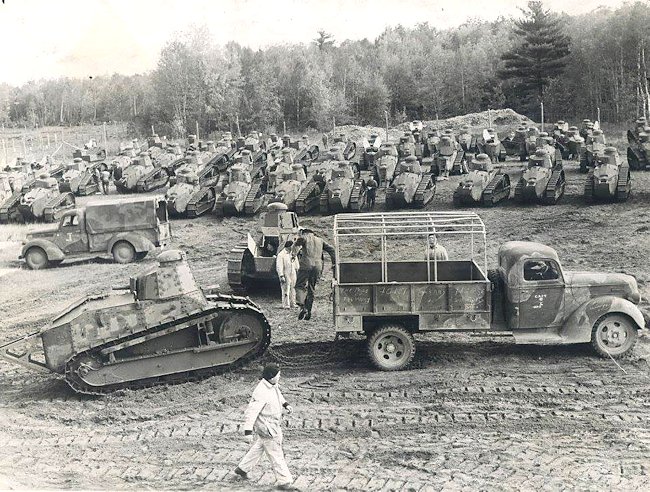 This photograph was taken on 10th October 1940. M1917 tanks, recently-unloaded from the rail cars and organized at Camp Borden, Ontario Canada. Here, according to the Toronto Star reporter, mechanics adjust the engines of 180 tanks that arrived that day. Another 34 tanks were on their way via rail flat cars. The tanks were towed to the site with the help of army trucks. On the Ford truck, there is written in chalk, “The Pride of the West, Fort Garry Horse”. (Source :Toronto Star/ Toronto Public Library) 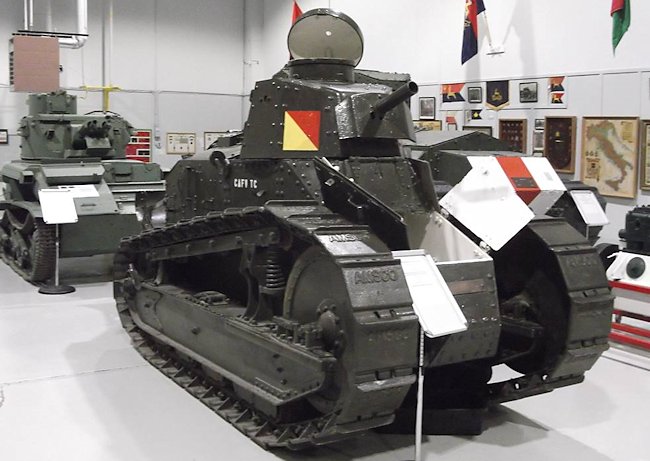 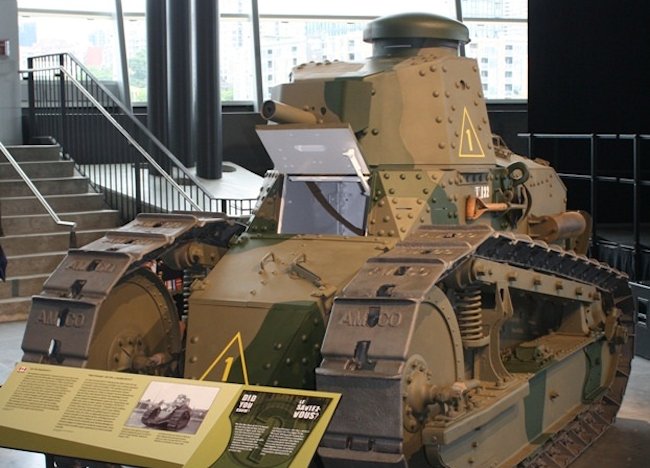 Did the Canadians ever use tanks or field an Armoured Corps during WW1?

i’m wondering the same. Any admin that could inlight us ?

Yes, hello,
Canada did form an armored corps in 1910 but did not receive tanks until 1918, after the war. British-operated tanks were attached to Canadian troops, including Renault FTs which were used for liaison duties.
– TE Moderator

Just saying but if you go to the ottawa war museum, do not make the same mistake as i did and touch the bottom of the tracks to try to lift them, they are VERY oily.