This rare Self-Propelled Anti-Aircraft Gun (SPAAG) began development in 1941 as a private venture by the Morris-Commercial company. Morris was one of Britain’s most famous motor companies, renowned for their cars. They also built a number of vehicles for the military, such as the Morris CS9 Armoured Car and the Morris Light Reconnaissance Car. One of their most famous military vehicles was the Morris C8 Field Artillery Tractor (FAT) also known as ‘Quad’. The Morris C9/B is based on this Tractor and was armed with the 40mm Bofors Anti-Aircraft Gun.
The British War Office liked the combination and placed an order. They were put into production in time for the D-Day operations of summer 1944.
The rarity of this SPAAG is somewhat frustrating to the researcher, as the contents of this article represent the majority of the available information out there, despite a relatively large number of produced vehicles. 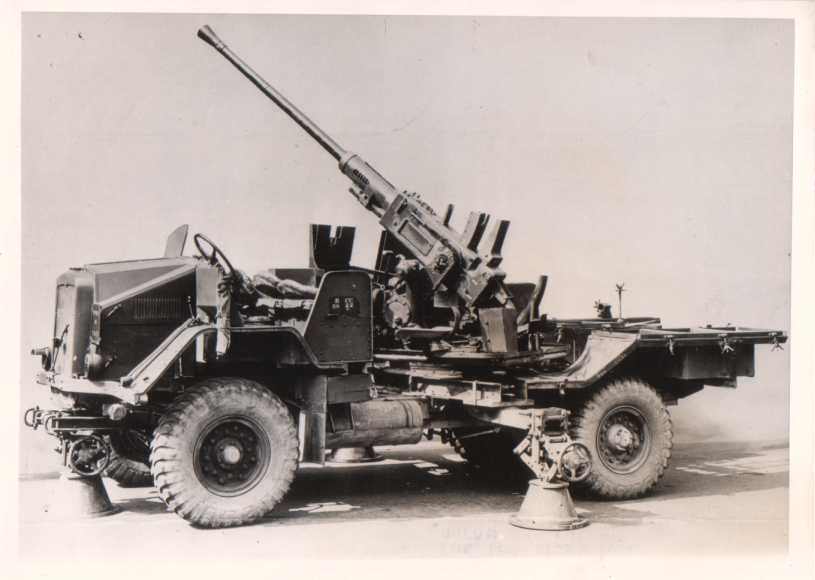 A three-man team designed and developed the C9. They worked under the direction of Mr. Percy Rose at the Morris plant at Adderley Park in Birmingham. Construction of the first prototype was completed by late 1942, and subsequently took part in trials. The trials were successful and the SPAAG entered production. A total of 1680 vehicles were built in total.
The C9/B, officially designated the ‘Carrier, 30 cwt, SP, 4×4, 40 mm AA (Bofors)’ was intended to be a mobile gun platform for the defense of convoys and columns against air attack. Light anti-aircraft regiments were usually outfitted with a battery of six self-propelled guns. 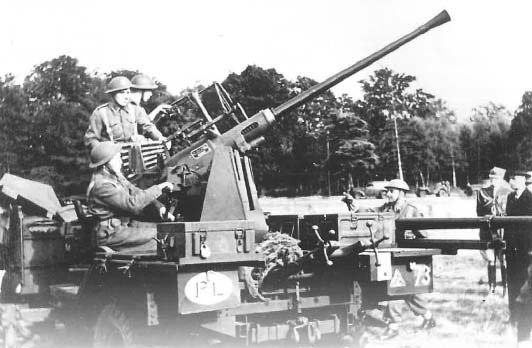 The C8 Field Artillery Tractor (FAT), also known as the ‘Quad’, was a 4×4 utility vehicle used by British and Commonwealth forces during the Second World War, starting in 1939. It was used to tow weapons such as the 25-Pounder howitzer and 17-Pounder anti-tank gun.
A 70hp Morris EH, 4-cylinder 3.5 liter petrol engine propelled the vehicle to a top speed of 50 mph (80 km/h). It was an extremely reliable vehicle, seeing service in the European and South-Eastern theaters. Around 10,000 C8s were built in total. 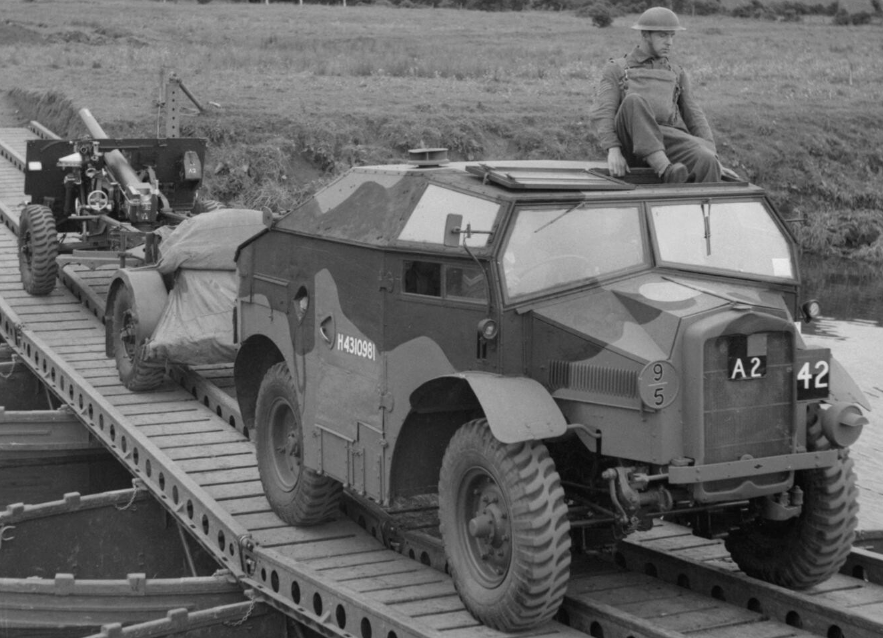 The Morris C8 FAT or ‘Quad’ artillery tractor, towng a 25-pdr field gun. It is this vehicle that the C9/B was based on. Photo: IWM

The chosen armament for this self-propelled anti-aircraft gun was perhaps one of the most famous anti-aircraft (AA) guns in history. This 40mm autocannon, designed and built by the Swedish company Bofors, entered military use in 1934. It became one of the most reliable and deadly guns of the time, seeing use with multiple armies during and after the Second World War.
It had a number of uses, being placed on warships, towed into battle or mounted on various tank chassis. The gun fired a 40 mm (1.6 in) shell, weighing 0.2 kg (2 lbs), up to a maximum vertical range of 7,160 m (23,490 ft). The rate of fire was 120 rounds per minute. Elevation range was from −5 degrees to +90 degrees. 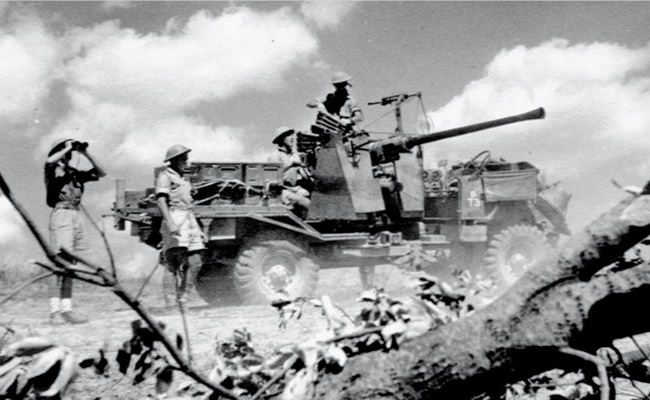 British troops operating the 40mm Bofors on the Morris. The exact location is not known, but judging by the uniforms it is a hot climate, suggesting the Far East. Photo: SOURCE:

The C8’s chassis was lengthened slightly for this new variant. The engine and drive systems remained the same as the C8 base vehicle, retaining the 70 hp Morris EH, 4-cylinder 3.5 liter petrol engine mounted at the front. It also stayed a 4×4 vehicle.
A simplistic, almost skeletal body was installed on the frame, including a cab area at the front that was open to the elements, even lacking doors, with seats for four personnel. Two seats were placed on the right (one for the driver) and two on the left. A canvas cover could be placed over the cab area to provide some protection from the elements. Only the very earliest of vehicles had a windshield installed.
A fully enclosed cab was avoided as its addition would have prevented the gun from having a 360-degree arc of traverse. Even the steering wheel was hinged so it could be folded out of the way of the gun. The 40 mm gun, with a shield, was mounted centrally on the chassis. A flat platform was constructed behind the gun, with stowage for 40 mm ammunition boxes over each of the back wheels. Pioneering tools and crew stowage were located under this flat platform. Apart from the gun shield, the vehicle was completely unarmored.
To provide a stable gunnery platform, four jacks were added to the chassis. One was at the front under the bumper, one at the rear, and one on the left and on the right on arms that folded out. Four conical ‘shoes’ were also used under the jacks to spread the weight of the vehicle over a wider area, with the combination of the two lifting the C9 off its wheels. Only the engine compartment at the front of the vehicle bared any resemblance to the C8 base vehicle, yet even this was distorted thanks to the stowage of the conical ‘shoes’ in stacked pairs on the fenders over the front wheels.
The vehicle sometimes towed a small, wooden two-wheel trailer with a canvas cover. This was likely used to tow extra supplies for the vehicle such as ammunition and possibly fuel.

The service life of this vehicle is not well recorded, unfortunately, despite a relatively large production total. The largest user of the C9/B was the Manx Regiment of the Isle of Mann. The Regiment was equipped with the Morris early in 1944, in preparation for operations in Europe. We do know that this SPAAG served in both theatres, fighting the Germans in Europe, and the Japanese in the East. At the point they were in Europe, their use as anti-aircraft vehicles would have continuously dwindled as the German Air Force gradually ran out of aircraft.
Such AA vehicles found alternate uses, however, as infantry support vehicles. The 40 mm Bofors would have been an extremely deadly weapon against enemy infantry, or light vehicles. It certainly would have been a devastating weapon against the thinly armored Japanese tanks in the Far East. Using it to engage both ground and air targets, the Manx Regiment became one of the highest scoring Anti-Air units of the Second World war.
At least one of the vehicles was sent to Australia. It took part in comparative testing alongside the locally produced self-propelled 40 mm SPAAG based on the Ford CMP chassis.

Thankfully, despite the rarity of the vehicle, a number do survive in the UK in various museums, but also in the hands of private restorers.
One such example can be found in the Cobbaton Combat Collection, near Barnstaple North Devon. Another can be found at the Douglas Aviation Museum on the Isle of Man. 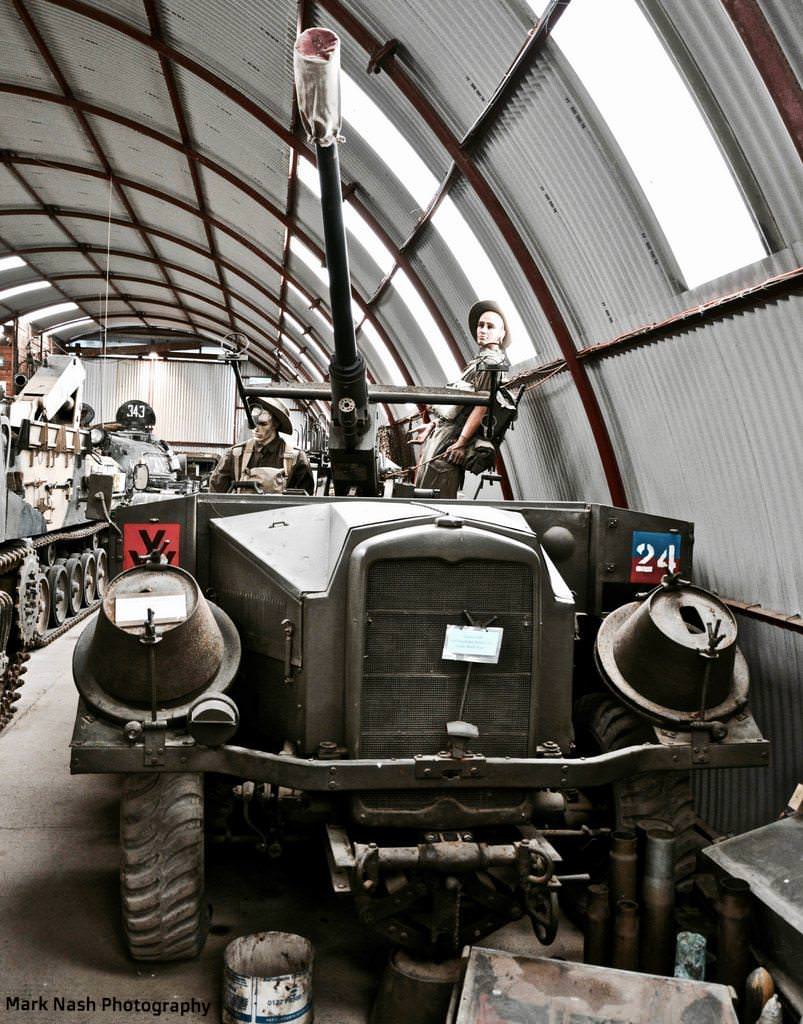 Dear Sir, there are a group of images showing this vehicle in support of 29th Infantry Brigade in Korea. Some of the personnel are infantry and are wearing windproof smocks making this 1950/51. Hope this of interest.

Hello Brien,
Could you tell us where to find these?

I also own a C9/B and used to have a You Tube video about the history of the vehicle (which was taken down, as they didn’t like the music). Pt II is still on there. Some of your assertions are incorrect, nearly every Light Ack Ack Unit had a troop of S.P. Bofors, also they briefly saw service in the western desert. The tail hanging fuel can stowage was a field modification not on the original.

Hello Gareth, much of this information came from the little information there is out there. I would be happy to work with you on correcting it if you are interested.

Hi
I lived near RAFRingway in Cheshire.
I remember probably from 1943 that we had an ante aircraft gun on a lorry on the road outside our house in Heald Green.
When it fired frequently the shrapnel would fall on our verandah glass roof and after the all cleat I would go to find the bits of metal.
Best wishes
Bill Rothwell

Thank you Mark! This one of the few articles I have seen on other Allies Self-propelled Anti-Aircraft Artillery. I know that there was more weapons than just Morris-Commercial C9/B. I have seen a photograph of the CMP Chevy C60L mounting a 40mm Bofor and a mention of Lorry, 3-ton, 40mm, Self-propelled on a CMP Ford F60B 3-ton Lorry, but beyond that, no information. Thanks for a Great Article!

This website uses cookies to improve your experience while you navigate through the website. Out of these cookies, the cookies that are categorized as necessary are stored on your browser as they are essential for the working of basic functionalities of the website. We also use third-party cookies that help us analyze and understand how you use this website. These cookies will be stored in your browser only with your consent. You also have the option to opt-out of these cookies. But opting out of some of these cookies may have an effect on your browsing experience.
Necessary Always Enabled
Necessary cookies are absolutely essential for the website to function properly. This category only includes cookies that ensures basic functionalities and security features of the website. These cookies do not store any personal information.
Non-necessary
Any cookies that may not be particularly necessary for the website to function and is used specifically to collect user personal data via analytics, ads, other embedded contents are termed as non-necessary cookies. It is mandatory to procure user consent prior to running these cookies on your website.
SAVE & ACCEPT
12 shares