In 1969, the California-based company of FMC (formerly the Food Machinery and Chemical Corporation) started work on a prototype high mobility scout car. The company was already a military producer making tracked vehicles and components for the military. Perhaps inspired by the popular ‘California Dune Buggy’, they decided to have a go at a military version. The first two prototypes were completed in 1970. 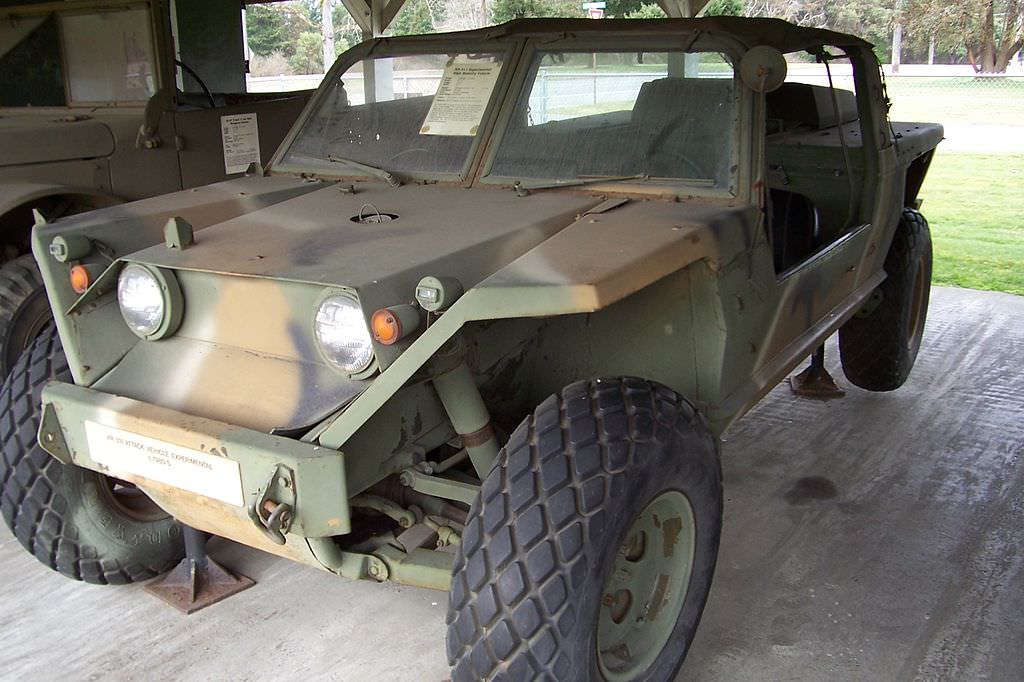 The XR-311 was built around a tubular steel frame chassis with the engine mounted in the back in the ‘Dune Buggy’ style which started with the old Volkswagen Beetle. The engine used was the 5.9 liter Chrysler V8 ‘big block’ petrol engine producing 200 bhp at 4000 rpm connected to a Chrysler A727 3 speed automatic gearbox. The vehicle had a very low profile, just 1.54 m high with seating for 2-3, and had 0.93 cubic meters of cargo space for a load of up to 386 kg. Despite being low, the vehicle still had 36 cm of ground clearance underneath. The suspension was provided by independent double A-frames with torsion bars and four large 16 inch (12.4 x 16) sand tires. 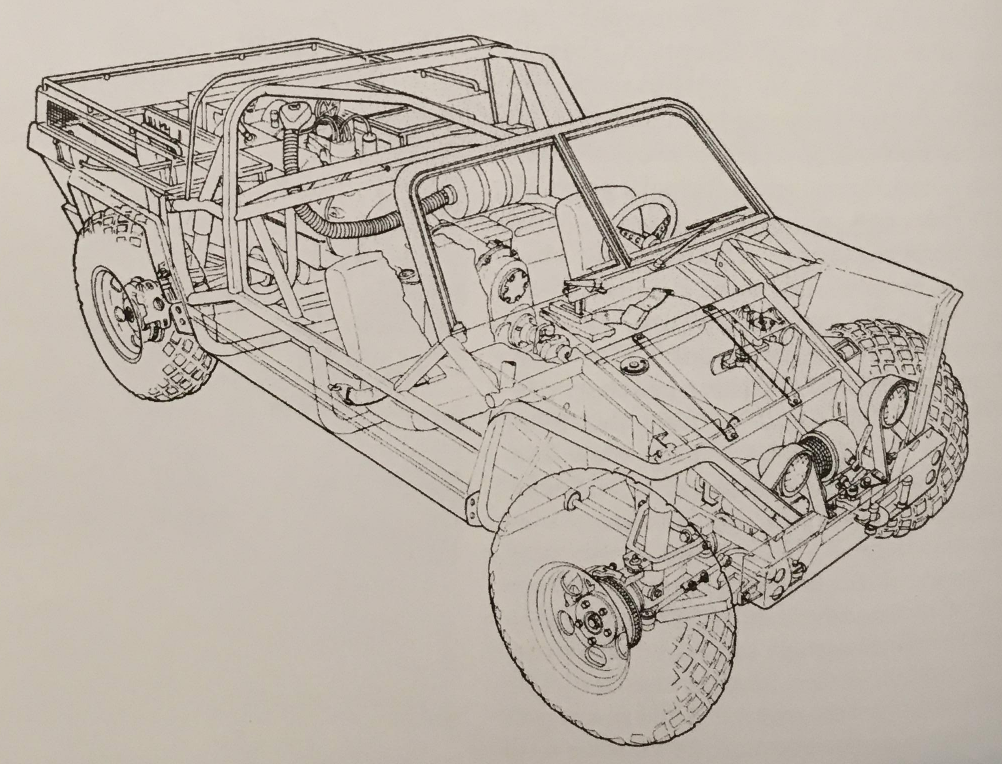 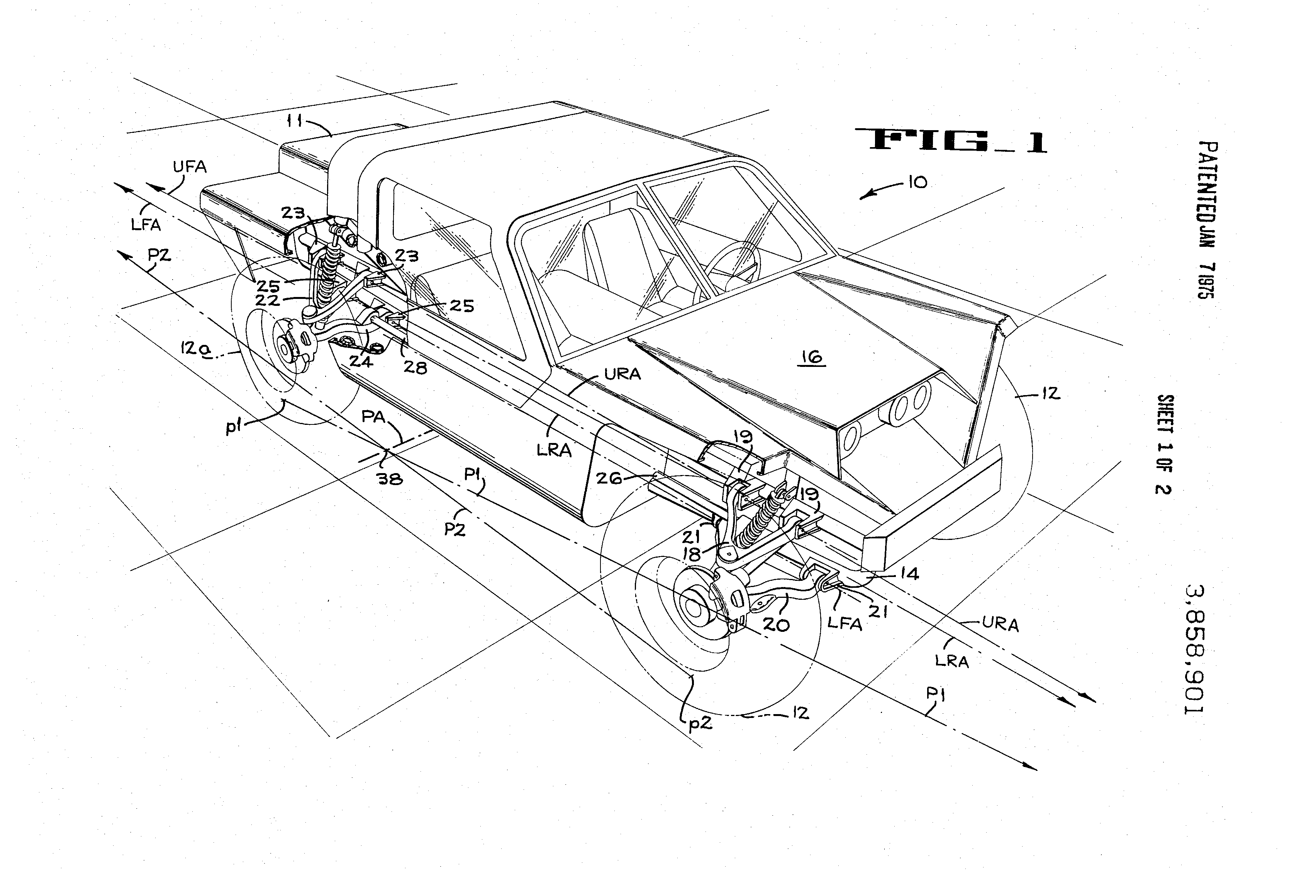 Arrangement of suspension components on the XR-311 in a patent filed by FMC in 1972. Note the recessed type of headlamps. 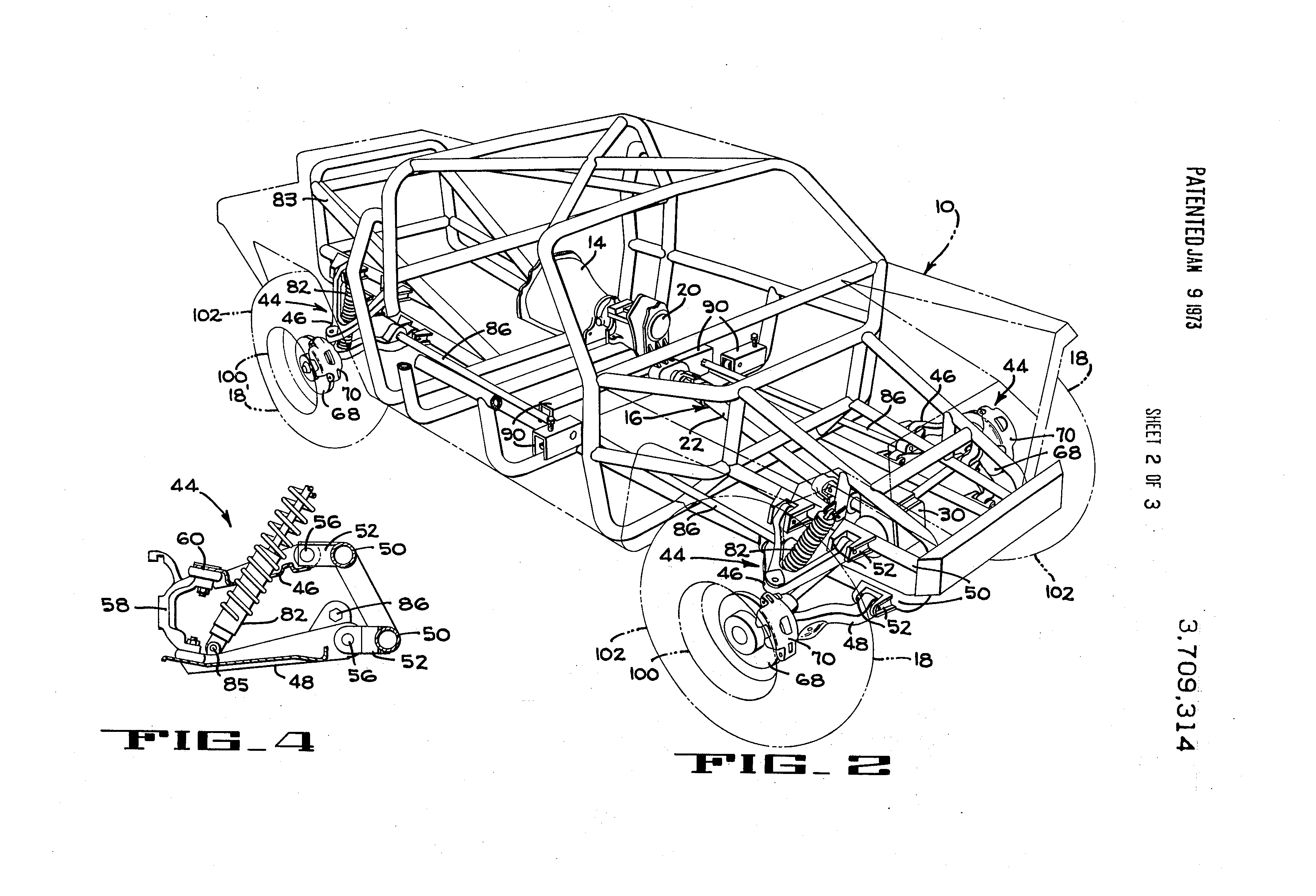 Arrangement of the tubular frame for the XR-311 in a patent filed by FMC in 1973. 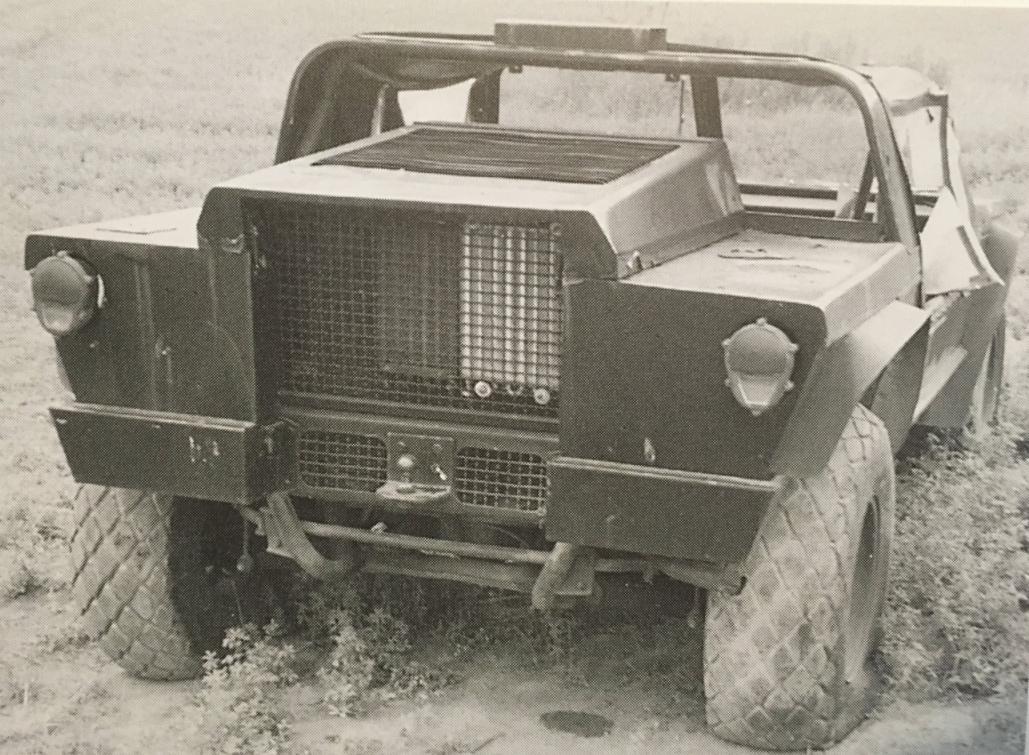 The rear of the FMC XR311 prototype showing the huge engine in proportion to the rest of the vehicle. Source: Bill Munroe

FMC built two examples of their XR-311 prototype and sent them to the Army’s Land Warfare Laboratory for testing and evaluation. They received some favorable reviews from the Army prompting ten more vehicles to be produced for further testing. These vehicles were delivered in 1971 but replaced the 5.9-liter V8 big block with the small block 5.2-liter Chrysler V8 which produced 197bhp compared of the 180bhp (200hp) of the big block. These vehicles were tested by the Army Armor and Engineering Board at Fort Knox, Kentucky in 1971 and 1972 for 200,000 miles (320,000km) of automotive tests. With the original 5.9 liter engine, these two vehicles would be the ‘Series I’ prototypes and with the 5.2 litre engine the ‘Series II’ prototypes. Four of the 10 ‘Series II’ prototypes were fitted for use as anti-tank vehicles with either the TOW ATGM system or a 106 mm recoilless rifle. Three of them were retained with no armor or armament as unarmored fast reconnaissance, and the final three were fitted to fulfill the role of escort and security work.
In their promotional material FMC advertised the XR311 as being adaptable for use for: 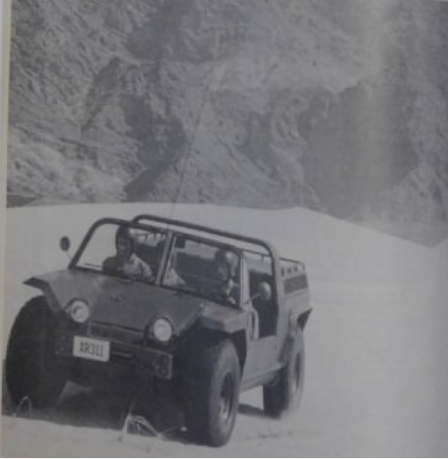 XR-311 prototype during evaluation across sand dunes – this is a still from the FMC promotional footage. Source: Military Vehicles Magazine #80 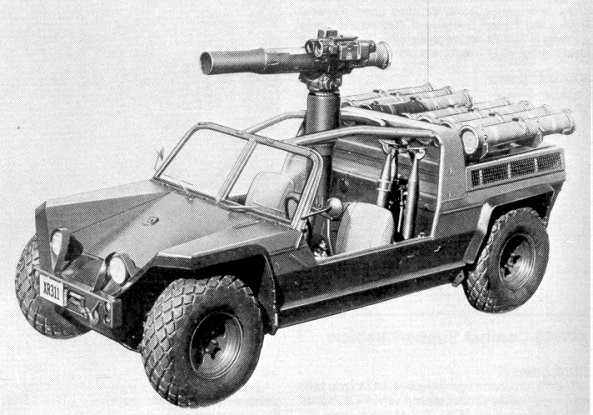 XR-311 fitted with the Hughes TOW ATGM system, seating is reduced to 2 and 7 spare rounds are carried on the rear deck. Source: meisterburg.com 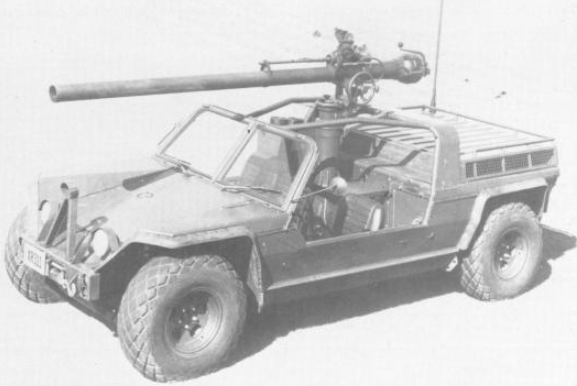 XR-311 with 106mm Recoilless Rifle. Note the addition of a gun crutch to the front bumper to support the gun during travel. Source: unknown
Fitted with armor plating comprising of steel doors, body panels, radiator and windscreen, various .50 cal. and 7.62mm machine guns on a variety of mounts were trialed on those three vehicles. The Series II vehicles also showed a lot of promise and the Army liked them but military spending was being cut back and the project shelved.
In 1974, the XR-311 even competed in the 2nd Armored Reconnaissance Scout Vehicle competition. 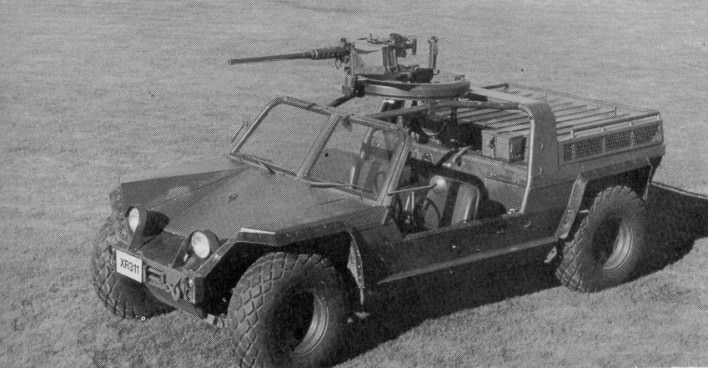 XR-311 fitted for convoy/escort duty with .50 cal. heavy machine gun fitted to a ring mount above the crew compartment. Source: Wheels and Tracks # 4 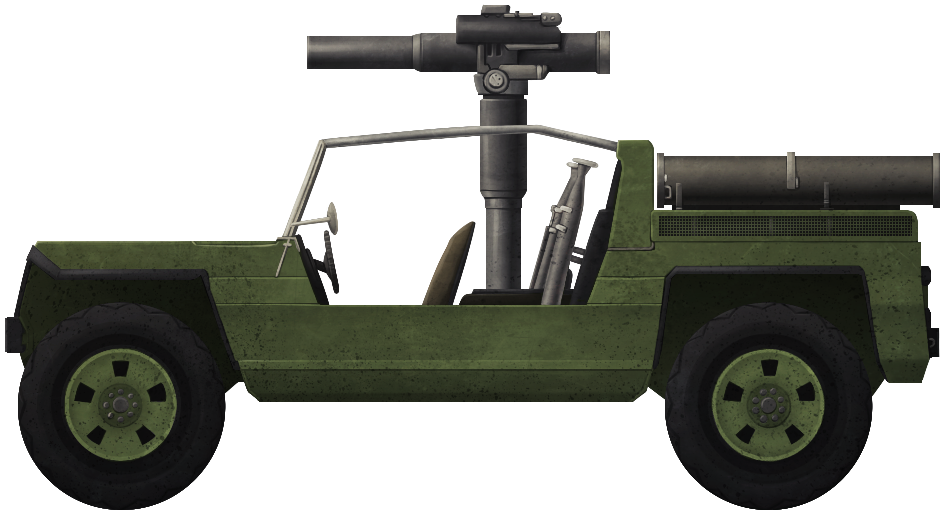 XR-311 fitted with the Hughes TOW ATGM system, seating is reduced to 2 and 7 spare rounds are carried on the rear deck. 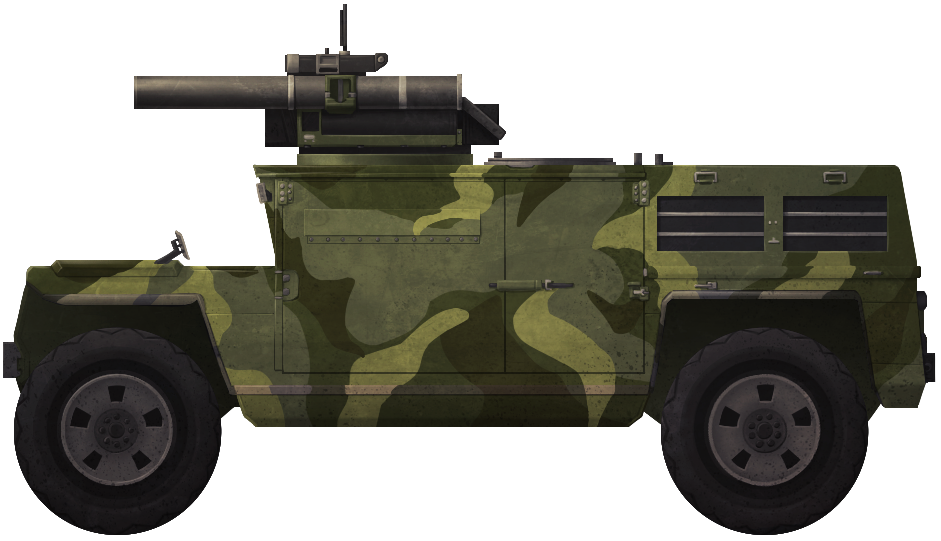 These two illusrations were produced by Andrei ‘Octo10’ Kirushkin, funded through our Patreon Campaign 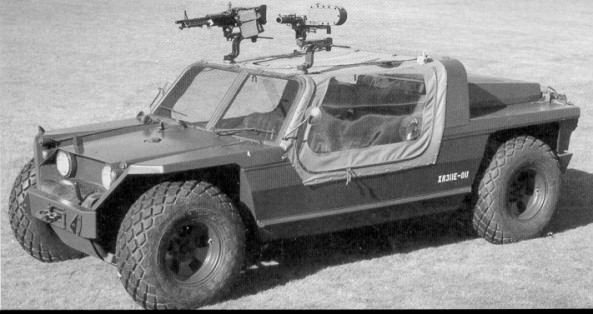 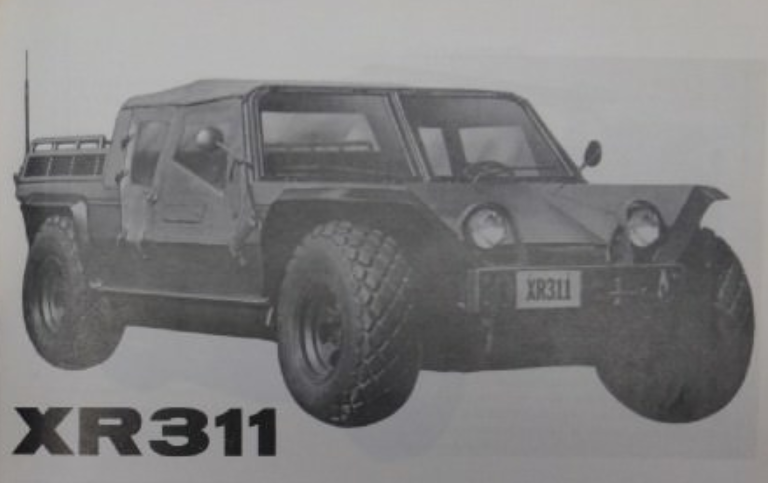 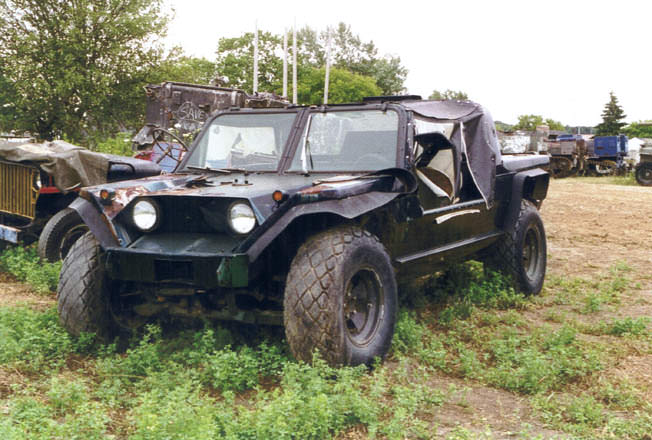 Undeterred by a lack of orders for the XR-311 by the US Government, FMC sought out interest from foreign buyers, including Israel. In 1974, FMC, therefore, developed a third series prototype with the same engine and gearbox as the Series II but with rearranged air intakes moving them to the sides at the back permitting space for a rear platform. This rear platform could be used for cargo or for a weapons station and several of these were sold to Israel but, with a lack of orders from the US Govt., FMC finally gave up on the XR-311 and sold all of the rights to the design to AM General. FMC had already entered into a licensing agreement with AM General anyway for production if the military had ordered the XR-311 so this was a good way for FMC to return to their original contracts and off-load this project to a firm who were interested in developing it further.

Two variants of XR-311 seen together. A hardtop version and an armored variant. The small height of the vehicles is apparent from the two men stood next to the vehicles. Source: Military Vehicles Magazine #80 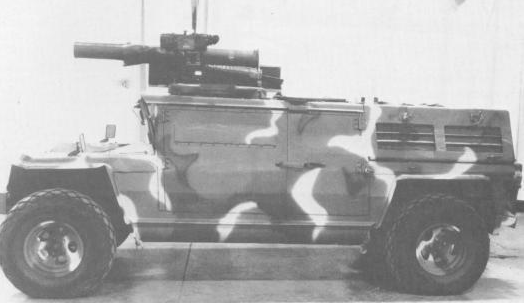 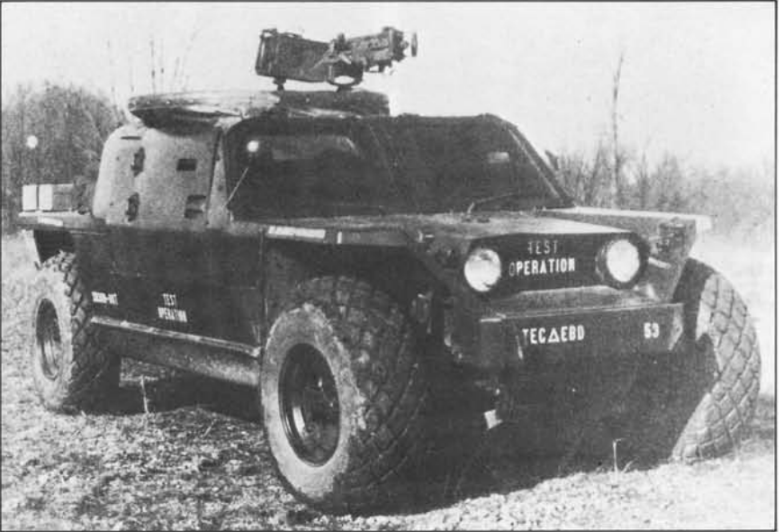 Another armored variant during evaluation in 1971, with protection over just the cab but sporting a .50 cal. heavy machine gun too. Source: Wheels and Track # 4 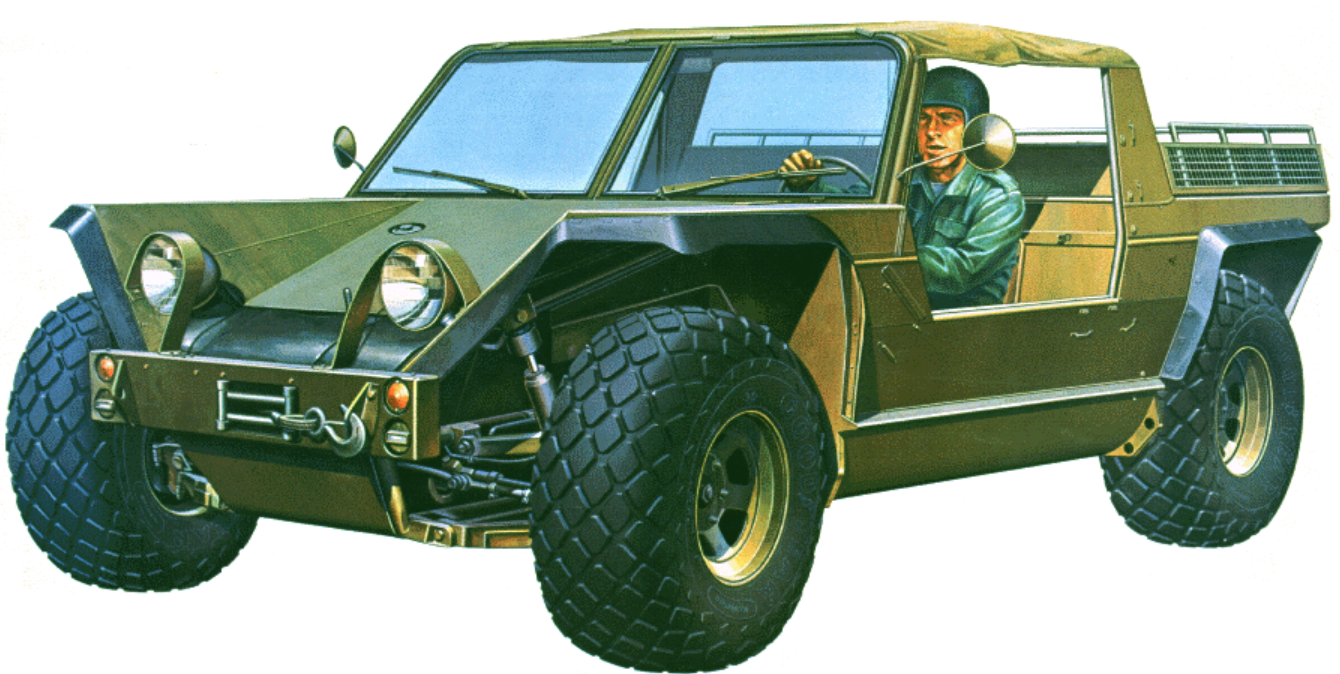 XR-311 Series III artwork. Source: Modified from Tamiya
FMC had jumped the gun, so to speak, submitting a design for a vehicle which the Army had not formally asked for and then asked the Army to examine it for its potential. This is not the normal way of doing things but FMC was right – the Army did need a new vehicle and later it accepted this fact. While it did not achieve commercial success save for a few sold to Israel, the concept of this fast off-road vehicle seems to have inspired some thought about a new general purpose vehicle for the US military to fill the many roles the Jeep had filled previously. By 1977, this need had been formalized by TACOM (Tank Automotive Command) as the new XM966 Combat Vehicle Support Program – a project that led to the HMMWV. The original XR-311 was over but a reworked vehicle would have one more go at a contract with the military under its new masters at AM General. 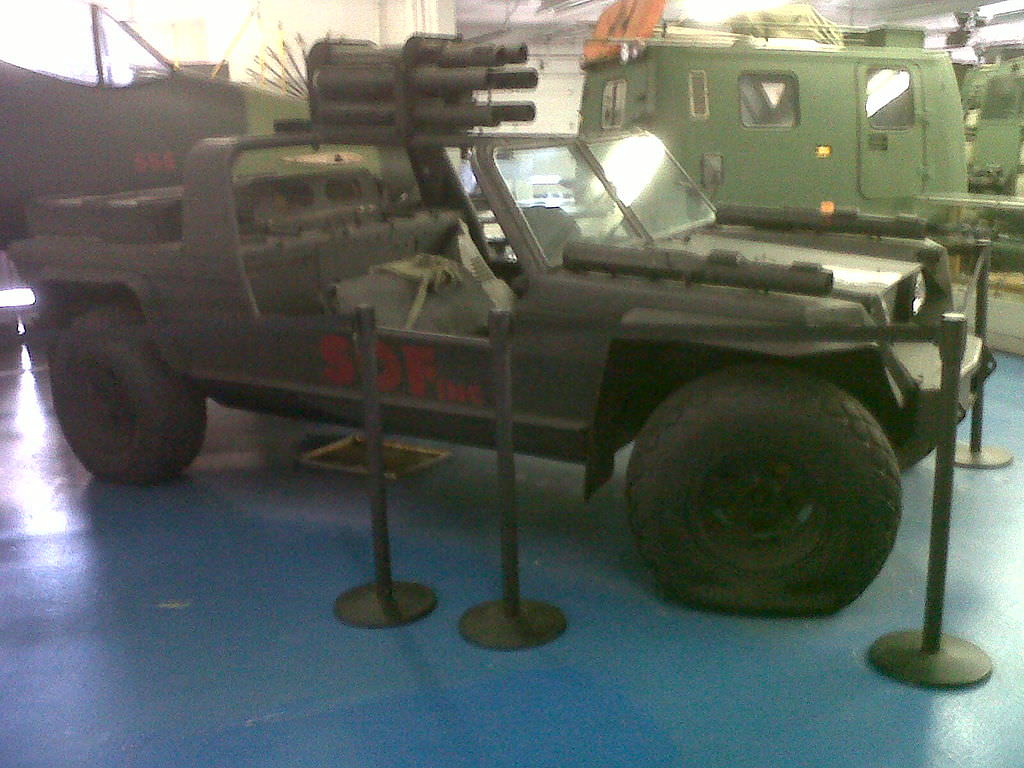 Preserved XR-311 prototype fitted with a rocket launcher of extremely dubious military value. Source: Wikimedia commons
For so few vehicles produced, surprisingly, several are still in existence with at least 3 in private hands and two on display in museums including the Russell Military Museum in Wisconsin.

One reply on “XR-311 HMMWV Prototypes”

The top picture is from the one preserved at the JBLM (Fort Lewis) museum.

This website uses cookies to improve your experience while you navigate through the website. Out of these cookies, the cookies that are categorized as necessary are stored on your browser as they are essential for the working of basic functionalities of the website. We also use third-party cookies that help us analyze and understand how you use this website. These cookies will be stored in your browser only with your consent. You also have the option to opt-out of these cookies. But opting out of some of these cookies may have an effect on your browsing experience.
Necessary Always Enabled
Necessary cookies are absolutely essential for the website to function properly. This category only includes cookies that ensures basic functionalities and security features of the website. These cookies do not store any personal information.
Non-necessary
Any cookies that may not be particularly necessary for the website to function and is used specifically to collect user personal data via analytics, ads, other embedded contents are termed as non-necessary cookies. It is mandatory to procure user consent prior to running these cookies on your website.
SAVE & ACCEPT
26 shares