The German weapons manufacturers Alkett Rheinmetall-Borsig tried to compete with Krupp-Gruson to produce an amored fighting vehicle that would carry a 10.5cm Leichte Feldhaubitz 18/40/2 L/28 light field howitzer onto the battlefield like a self-propelled gun, and also allow the gun to be lowered to the ground.
This then enabled the tank chassis to function as an armoured ammunition carrier. The driver could return to the nearest supply point and load the vehicle with more high explosive HE shells and propulsion canisters. The gun could also be fired from its armored open top turret on top of the vehicle without the need to lower it. 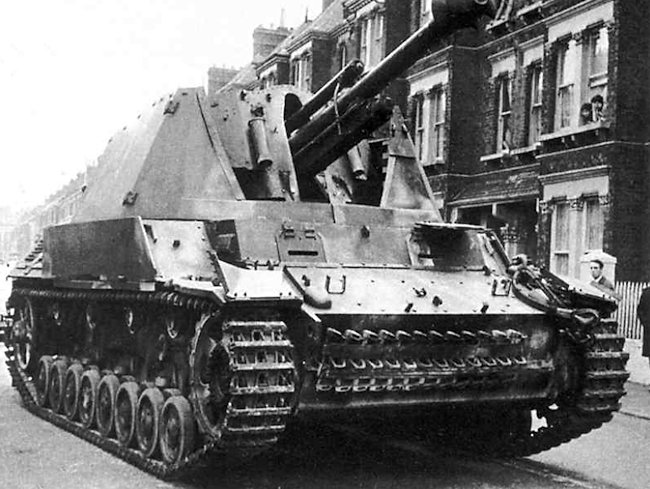 Alkett prototype 10.5cm leFH 18/40/2 L/28 (Sf) auf Geschüetzwagen III/IV artillery SPG
The Krupp-Gruson design was called the 10.5cm leFH 18/1 L/28 auf Waffenträger IVb. The Alkett Rheinmetall-Borsig design was given the name 10.5cm leFH 18/40/2 L/28 (Sf) auf Geschüetzwagen III/IV. The German word Waffenträger means ‘weapon carrier’ and Geschüetzwagen translates to ‘gun vehicle’ (it was often abbreviated to just GW). Both words are appropriate to describe these vehicle’s function.
It was also called the 10.5cm leFh/40/2 (Sf) Geschutzwagen PzIVb, or 10.5cm leFh/40/2 (Sf) GW PzIVb or 10.5cm le.F.H. 18/40/2 L/28 (Sf) auf GW III/IV. The letters (SF) stand for ‘Selbstfahrlafette’ – self-propelled carriage. The abbreviation leFH stands for the German words ‘leichte FeldHaubitze’ which, translated, means light field howitzer.
To remove the turret and gun on the Krupp-Gruson design, a large folding metal gantry was mounted on the rear of the vehicle. When it was folded down the long metal arms were stowed on top of the track guards. This vehicle was given the nickname of the Heuschrecke, the Grasshopper, as the folded metal arms looked like the legs of a grasshopper.
It is easy to tell the two designs apart. The Alkett Rheinmetall-Borsig 10.5cm weapon carrier does not have any external folding metal struts on top of its track guards unlike the Krupp-Gruson design.
The 10.5cm LeFH 18/40/2 L/28 light field howitzer’s carriage rails and wheels were stowed at the rear of the vehicle on the outside. When the gun crew wanted to dismount the howitzer from the vehicle to use it as conventional artillery gun on the ground, they would unlock the gun from its mount and use a jack to lift it up and off.
The armored superstructure of the turret is hinged at the front to allow it to be folded forward to give more room to the gun crew during the removal procedure. The carriage, carriage wheels, and rear rails would then be reattached. A ramp down from the top of the vehicle would be fitted and a manual block and tackle winch system were used to lower the gun down to the ground. The reverse procedure would be used to remount the gun on top of the vehicle.
The howitzer could be fired from on top of the vehicle like a normal self-propelled gun. It could traverse through 360 degrees, as it was mounted on a turntable gun platform that was counter sunk into the top of the tank chassis.
There was no top to the turret. There were a few disadvantages of an open topped vehicle. The crew was exposed to the elements and were also at risk of injury from enemy thrown hand grenades, mortars and shrapnel from air burst enemy shells. A canvas tarpaulin rain cover was produced to give some protection from the elements. 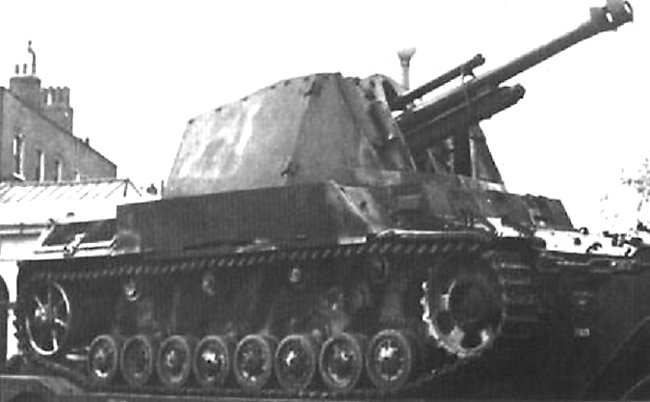 Alkett submitted its designs for a 10.5cm howitzer weapons carrier self-propelled gun to the German Army Weapons Agency (Heereswaffenamt) Gliederung Waffenamt Prüfwesen (Wa Prüf 4) artillery section on 27th September 1943.
The first prototype was ready for testing on 28th March 1944. It was demonstrated to the Wa Pruef 4 weapons inspectors at Hiliersleben. The gun crew took around 15 minutes to dismount the howitzer and mount it on the newly designed Schiesspilz (firing pedestal). The gun could not be traversed a full 360 degrees on the ground.
The inspectors submitted a report that recommended the protective turret armor was to be increased in thickness, that the Schiesspilz (firing pedestal) be carried on the vehicle, and that the howitzer be modified so that it could fire to the rear of the vehicle at an angle of -5 degrees.
Alkett suggested that the turret superstructure armor could be angled to increase the gun crew’s protection. This suggestion was rejected as it decreased the amount of ammunition that could be stored.
The Wa Pruef 4 weapons inspectors re-evaluated the new modified prototype after a second demonstration on 28th May 1944. They were happy with the changes. As a Panzer III/IV self-propelled gun tank chassis was going to be used, it was felt that field trials would not be necessary as this chassis was already being used in the production of the Hummel and Nashorn self-propelled guns.
The design team at Alkett/Rheinmetall-Borsig had already lengthened a German tank chassis. It was called the Geschützwagen III/IV. Components were adopted from both the Panzer III and Panzer IV tank chassis. The more robust final drive wheels, front drive wheels and steering units plus the Zahnradfabrik SSG 77 transmission gearbox were adopted from the Panzer III Ausf.J. The Maybach HL 120 TRM engine with its cooling system, the suspension, and idler with track tension adjustment were adopted from the Panzer IV.
The first twenty-five production 10.5cm leFH 18/40/2 L/28 (Sf) auf Geschuetzwagen III/IV were due to be completed by October 1944 but there were long delays at the factory. The German Army Weapons Agency (Heereswaffenamt) canceled the order on the 12th December 1944 before any were completed.
A revised design which did not feature the countersunk turntable gun platform was put forward and accepted. The gun would now only have a limited traverse when mounted on the tank chassis like a normal self-propelled gun. This was hoped to make production cheaper and simpler. An initial order for 250 of these vehicles was approved. The first 35 would be built by February 1945 and the rest to follow. There are no production report documents that suggest any of these vehicles were produced.
There was no dramatic advantage to building this weapon over the 15cm Hummel, 10.5cm Wespe or 15cm Grille artillery self-propelled guns that were already in production. These vehicles were less complicated to produce and operate.

The 10.5 cm leFH 18 gun was a German light howitzer used in World War II. The abbreviation leFH stands for the German words ‘leichte FeldHaubitze’ which, translated, means light field howitzer. It was fitted with a ‘Mundungbremse’ muzzle brake to allow longer range charges to be fired and reduce the amount of recoil on the gun. This increased the operational life of the gun barrel.
The 105mm high explosive HE shell weighed 14.81 kg (32.7lb). The armor piercing shell weighed 14.25 kg (31.4lb). It had a muzzle velocity of 470 m/s (1,542 ft/s) and a maximum firing range of 10,675 m (11,675 yds). With a good gun crew, it had a rate of fire between 4-6 rounds per minute.
The 10.5cm leichte Feld Haubitze 18 gun was not very useful in the direct-fire mode against enemy armored vehicles. It could only penetrate 52 mm (2 in) of armor plate at a very short range of 500 meters.
The high explosive shell was in two pieces. It was a ‘separate loading’ or two part round. First, the projectile would be loaded and then the cartridge propellant case. 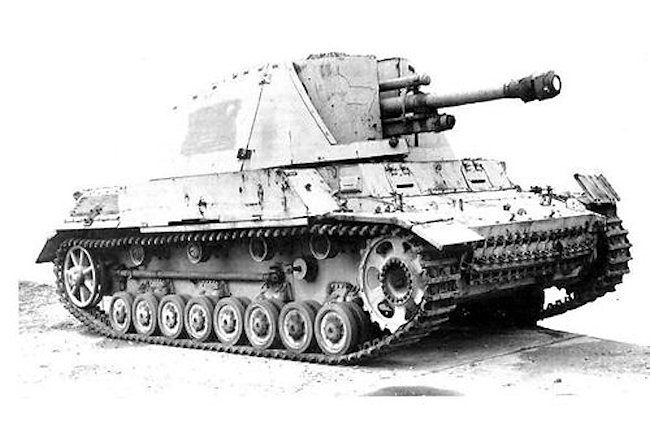 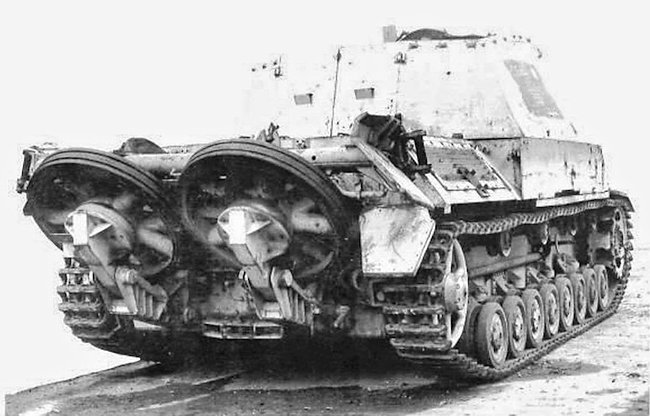 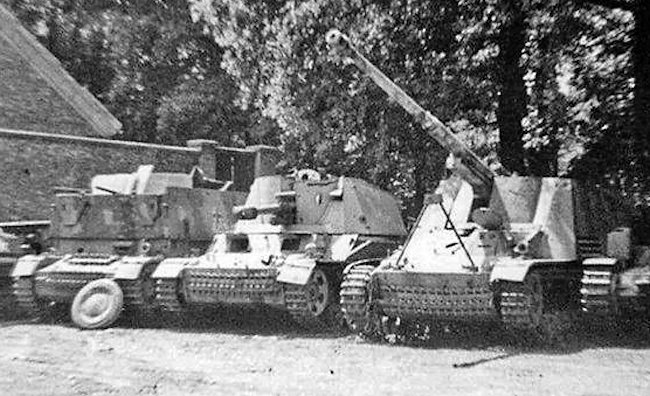 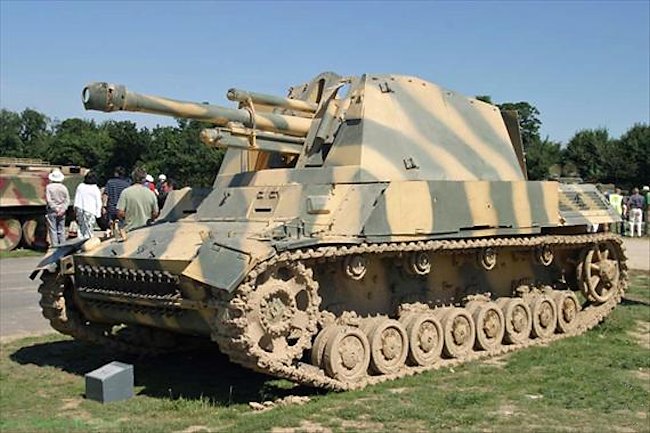 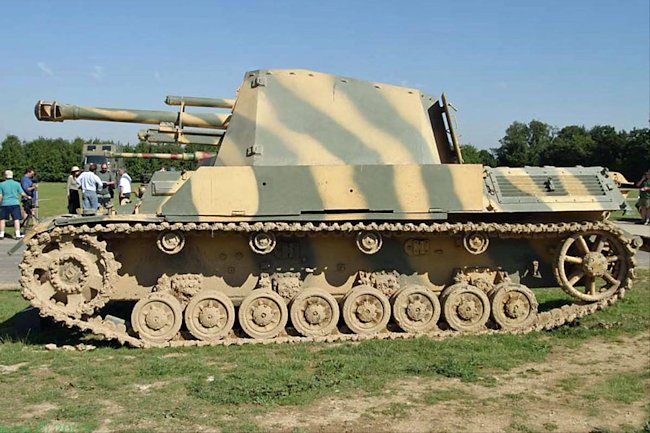 Along the top of the open casement superstructure are small D rings. These were used to tie down the bad weather tarpaulin. 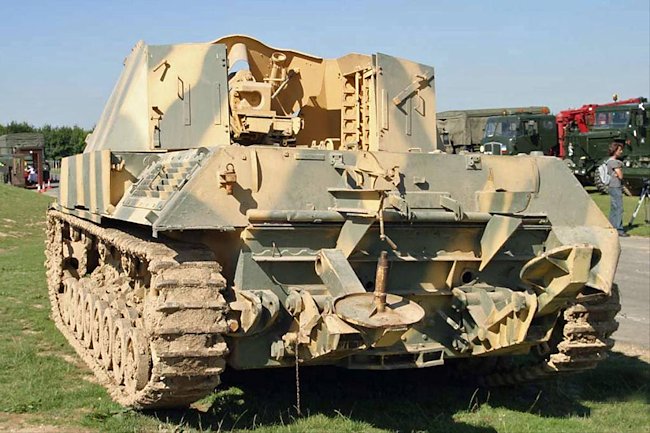 I’d just to add that the photo of the Geschuetzwagen III/IV between the Hummel and a Mobelwagen, that is not actually a “Hummel SPG” as described in the caption. The longer gun barrel with a distinguished muzzel brake identifies it as a Nashorn SPG Panzerjaeger.

It would function the same as any other self-propelled gun, for example the Wespe or Grille. If you’re asking how the weapon could be removed, like the Heuschrecke 10, it couldn’t.

This website uses cookies to improve your experience while you navigate through the website. Out of these cookies, the cookies that are categorized as necessary are stored on your browser as they are essential for the working of basic functionalities of the website. We also use third-party cookies that help us analyze and understand how you use this website. These cookies will be stored in your browser only with your consent. You also have the option to opt-out of these cookies. But opting out of some of these cookies may have an effect on your browsing experience.
Necessary Always Enabled
Necessary cookies are absolutely essential for the website to function properly. This category only includes cookies that ensures basic functionalities and security features of the website. These cookies do not store any personal information.
Non-necessary
Any cookies that may not be particularly necessary for the website to function and is used specifically to collect user personal data via analytics, ads, other embedded contents are termed as non-necessary cookies. It is mandatory to procure user consent prior to running these cookies on your website.
SAVE & ACCEPT
24 shares