Although it had performed well before the outbreak of the Second World War, and during it’s early stages, the Type 95 Ha-Go was showing it’s age by 1942. It simply didn’t stand a chance against the increasingly powerful tanks being fielded by the Americans in the Pacific, and later, the Soviets in Northern Manchuria.

Between 1942 and 1943, attempts had been made to replace it with a new light tank. This resulted in the Type 98 Ke-Ni and Type 2 Ke-To, respectively. However, these projects failed to fully materialize with only 104 Ke-Ni and 34 Ke-Tos built by the end of the war.

Following this, the IJA decided to try again and work started on the Type 5 Ke-Ho (五式軽戦車 ケホ Go-Shiki Keisensha Keho). It was the last light tank designed by the Imperial Japanese Army (IJA).

The Ke-To experimented with a slightly better main armament in the form of Type 1 37 mm (1.46 in) gun. This offered a much-needed improvement over the Type 94 37 mm (1.46 in) used on the Ha-Go. Though a step in the right direction, this weapon still was not enough to combat the M4 at any angle. The quest to mount the new Type 1 47mm tank gun on a fast, mobile chassis began in 1942. Up till then, the Ha-Go had performed well against American M3 Light tanks, but began to suffer as more heavily armored tanks began to appear such as the M5 Stuart and the larger M4 medium tank. The Ha-Go’s last successful engagement was against Ameican forces on the Bataan Peninsula in December 1941. A force equipped with M3 Stuart Light tanks.

It was projected that this new light tank would have a 4-man crew. This consisted of the Driver (front right hull), bow gunner (front left hull), the Commander who also acted as loader (right turret) and the gunner (left turret).

The Hull of the Ke-Ho was based on an enlarged Ke-Ni/Ke-To chassis. It utilized a miniaturized bell-crank suspension, based on that of the Chi-Ha/Chi-He with 6 road-wheels per-side, 3 return rollers and a rear mounted idler wheel. The bell-crank suspension consists of bogies mounted on arms, which in turn are connected to a long spring on the side of the hull. The bogies push against each other when passing over terrain, allowing the bogies to actuate. The Ke-Ho was powered by a 150hp Type 100 air-cooled diesel engine. Despite its heavier weight, the Ke-Ho would still be able to travel at a top speed of 50-55 km/h (31 – 34 mph). Like the majority of Second World War Japanese armor, the engine was placed in the rear with the transmission and drive sprockets at the front.

The turret planned for use on the Ke-Ho was based on the original Chi-He design, which in turn was based on the Chi-Ha Shinhoto’s. It had a long, square rear with a rounded turret face. There was a cupola on the right side of the roof with a two-part hatch and vision periscopes for the commander. The tank would be armed with the Type 1 47mm tank gun, as used on the Chi-Ha Shinhoto and initial models of the Chi-He. This gun had a muzzle velocity of 840 m/s (2,723 ft/s) and could penetrate a maximum of 55 mm (2.2 in) at 100 meters (328 feet). It was equipped with both Armor-Piercing High-Explosive (APHE) rounds and High-Explosive (HE) rounds. Although this gun was a huge improvement over the 37mm of the Ha-Go, it was still not enough to combat the front of an M4. It is likely that if the Ke-Ho made it to combat, it would have to exploit the same flanking, close quarters ambushes utilized by Shinhoto Chi-Has. Although the maneuverabiity of the Ke-Ho would of made that task much easier.

Secondary armament consisted of two Type 97 7.7mm machine guns. One of these was located in a ball mount on the front left of the hull, operated by the bow-gunner. The other was located in the right-rear corner of the turret bustle, operated by the loader. Either of these guns could be dismounted and placed atop a mount next to the commander’s cupola.

One of the major shortcomings of the Ha-Go which designers sought to address was the fact that with a maximum of just 12mm (.47 in) thick armor, a .50 cal (12.7 mm) machine gun could effectively knock one out. The Type 98 Ke-Ni and Type 2 Ke-To had somewhat of an armor upgrade, with a maximum of 16mm (.62 in). However, this was still not enough to reliably counter .50 cal rounds. As such the, Ke-Ho would have an even greater increase to armor thickness, being at least 20 to 50 mm (.78 in – 1.9 in) thick, more than enough to stop a .50 caliber round.

A planned variant of the Ke-Ho was the Ku-Se (自走砲 Jisōhō クーセ) self-propelled gun/tank destroyer. It was to be armed with a Short Type 99 75 mm mountain gun, in a similar open case mate to the planned Ho-Ni and Ho-Ro SPGs.

In 1942, a prototype vehicle was built, and the project was canceled soon after. As with most new tank designs the Japanese came up with, it was low on the list of importance. Resources and construction efforts were instead being focused on warships and warplanes. Mass production was approved in 1945 however, but this was of course too late and the one prototype remained the only one built. This also meant that the Ku-Se variant never left the drawing board.

What happened to the prototype is unknown. It was likely taken back to the USA for analysis and later broken down. 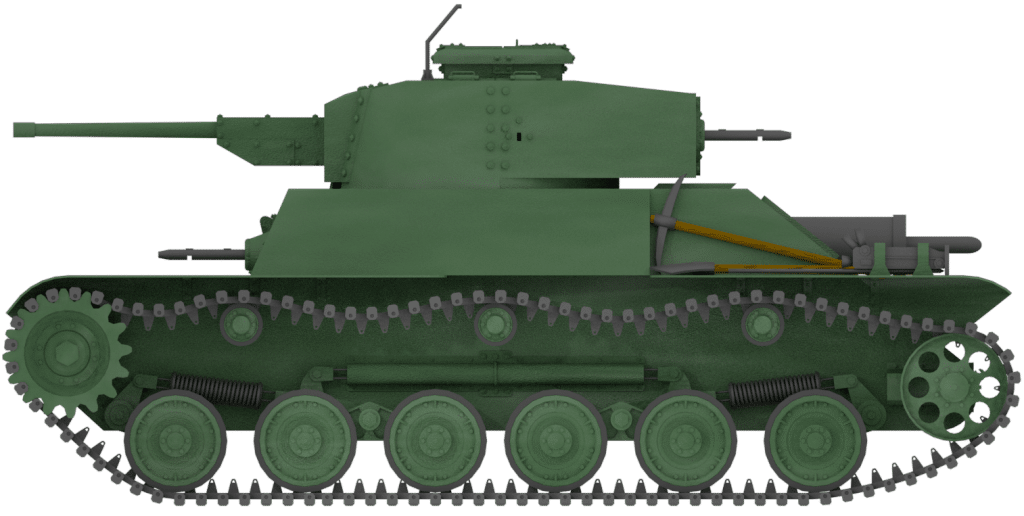 Illustration of the Type 5 Ke-Ho based on available drawings. Note the miniature bell-crank suspension and the early Chi-He turret armed with the Type 1 47mm gun. The placement of a jack and pioneer tools on the left rear fender is speculative. However, it is also based on the known placement of such items on other Japanese tanks of the era. This Illustration was produced by Brian Gaydos, funded by our Patreon Campaign.

Love the 3D model of the Ke-Ho, and thanks for making a topic on such a rare and not very famous Japanese tanks, hope to see more of them !
This is mine Ke-Ho i made long ago, if you want you can post it here!
https://i.imgur.com/z7hmAWn.jpg
Note i misspell the one with 57mm gun as ”ke-to” instead of ”ke-ho” x(

Did you make these models yourself?

This website uses cookies to improve your experience while you navigate through the website. Out of these cookies, the cookies that are categorized as necessary are stored on your browser as they are essential for the working of basic functionalities of the website. We also use third-party cookies that help us analyze and understand how you use this website. These cookies will be stored in your browser only with your consent. You also have the option to opt-out of these cookies. But opting out of some of these cookies may have an effect on your browsing experience.
Necessary Always Enabled
Necessary cookies are absolutely essential for the website to function properly. This category only includes cookies that ensures basic functionalities and security features of the website. These cookies do not store any personal information.
Non-necessary
Any cookies that may not be particularly necessary for the website to function and is used specifically to collect user personal data via analytics, ads, other embedded contents are termed as non-necessary cookies. It is mandatory to procure user consent prior to running these cookies on your website.
SAVE & ACCEPT
36 shares