The Wireless Communications tank was the first armored vehicle ever to carry equipment that granted the ability of two-way audio communication via morse-code. Prior to this installation, all tanks on the battlefield had to rely on either physical (eg, a written note) or visual communication.
Physical communication was achieved by using carrier pigeons. Four of these were carried in each tank in a wicker basket. They were launched, carrying messages attached to the legs, from hatches in the tanks sponsons. Visual communication was in the form of semaphore and signal flags. Different colored flags were used to indicate information for example if it had broken down, got stuck or was knocked out. Semaphore communication was achieved either by a mechanical mast fitted with paddles attached to the tank’s roof or by hand via hatches in the back of the tank.

There were problems with both methods, however. A pigeon was a one-way message and could not be replied too (not to mention it might get lost, shot or even eaten). Although it was a two-way method, Semaphore was not reliable at times of low visibility, such as early morning fog or the thick acrid smoke that so often accumulated on the battlefield. There were attempts at running a telephone cable behind some tanks so they could have audio communication. These were often cut by shelling or by getting snagged on battlefield debris.
The answer to dealing with such issues was wireless communication. 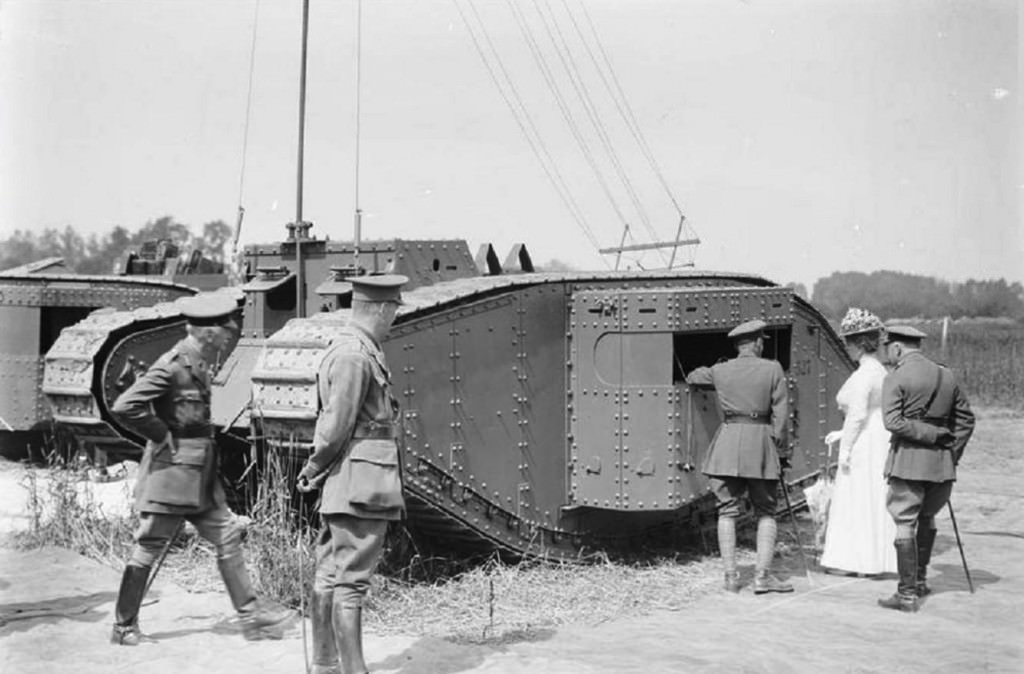 Caption for the 1st photo is Queen Mary of Teck inspecting tanks (Specifically a Wireless Comms Tank) and personnel at the Tank Corps Central Stores and Workshops at Erin, 7 July 1917. She is accompanied by General Hugh Elles, the Commander of the Tank Corps (on her right) and Anthony Ashley-Cooper, 9th Earl of Shaftesbury (on her left). Photo: IWM 3234

The Mk. I Tank

The world’s first mass-produced tank, the Mk. I featured the rhomboid design that would become iconic in British tanks of the First World War. The tanks entered service in 1916, first seeing combat 15 September 1916 at the Battle of Flers-Courcelette during the bloody Somme Offensive.
Slow, heavy and cumbersome, the Mk. I tanks came in two variants, known as Male and Females. The males were armed with two 6-Pounder guns, 1 in each sponson which was mounted on each side of the tank. They were also armed with three machine guns, one in each sponson and one at the front of the tank. The females were armed exclusively with machine guns, two in the sponsons on each side of the tank and a further machine gun at the front.
Designed to keep up with attacking infantry, the tanks were slow. Propulsion was provided by a Daimler-Knight 6-cylinder sleeve-valve 16-liter petrol engine, providing 105 hp and giving the 27-ton vehicle a top speed of 3.7 mph (6.0 km/h). 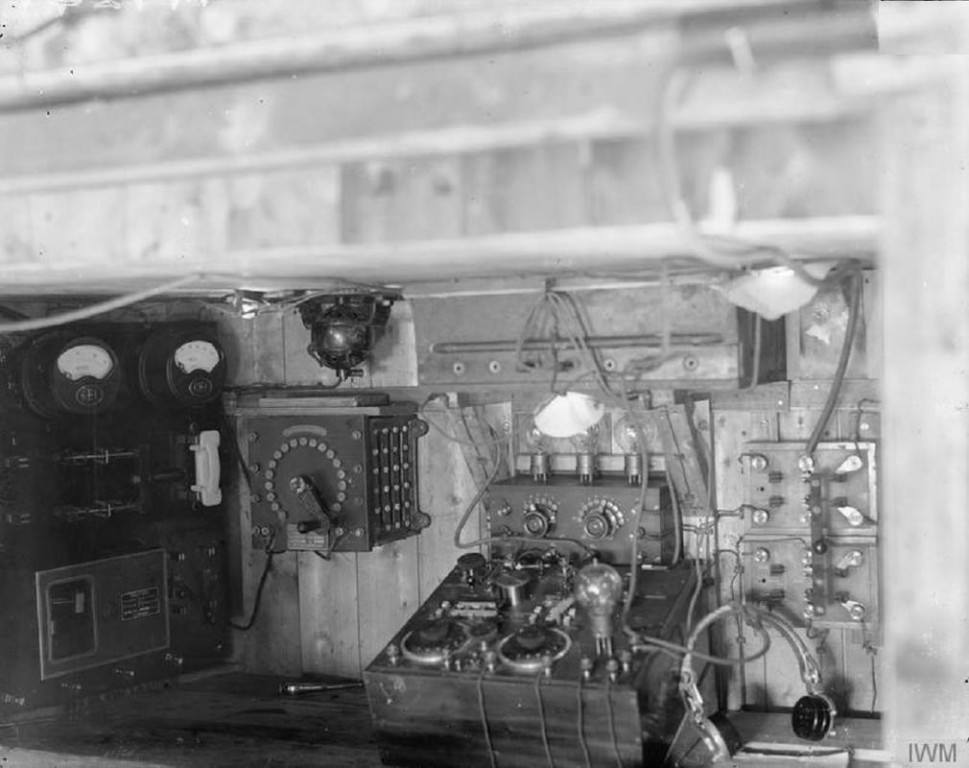 This photo shows the inside of the tanks right sponson and the Wireless set within. Photo: Imperial War Museum.

Experiments with mounting a wireless set inside a tank started in June 1917. That October, Continuous Wave (CW) receiving stations were used in battle. Older models of tanks, such as the Mk. I (the example in the available photos) were used as test subjects, with all weapons and corresponding internal equipment stripped out. They were successful enough to secure a place for Wireless Communication in Tank Signal organization. The original, intended method was to use the tanks as armored transport vehicles that would carry all the wireless receiving stations equipment that would be set down in suitable locations in no-man’s land after the main attack had breached and cleared the German trenches and started to move inland. When this was proved unsatisfactory, interest turned to mounting the antenna on the tanks themselves.

The sponsons usually carried the tank’s main armament. The tanks first had Vickers and Hotchkiss MGs and then were later upgraded when new MG mounts were fitted. These empty sponsons were used as the locations for the wireless equipment. The Wireless set was mounted in the right sponson, with a small operations desk added to the left. The set and accompanying systems were powered by two additional 10-volt accumulator batteries and a small dynamo fitted to the engine.

The morse-code was transmitted through a 15-foot (4.6 meters) tall aerial. When the tank was mobile, the aerial was stowed horizontally atop the tank’s roof. When transmitting and receiving, the tank would be stationary and the mast raised. The mast supported the aerial cable which connected through the tank’s roof to the wireless set. The length of the cable was approximately 200 feet (61 meters) long. A length of this cables was mounted to the left and right of the mast. Various aerial types were tried out in France and UK to test the effectiveness of air to tank wireless telephony communications. Below is the first page of Lt Arthur Wragg’s (8 Sqn. RAF) report illustrating two of the aerials. Later, the work was transferred to Biggin Hill. 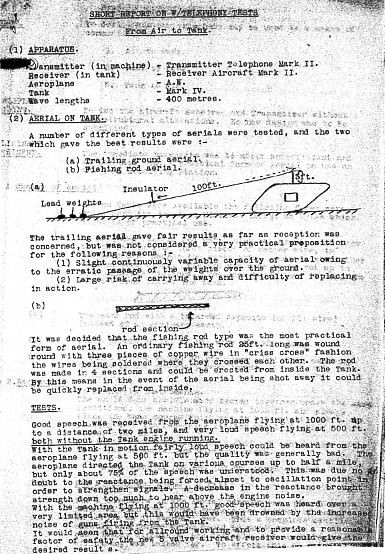 Photo: Landships Forum
One of the other types of wireless/telephony receiving aerials tried out at Biggin Hill can be seen on official photos of Mk. IV ‘Supply’ tank 402. The ‘Flexible panel’ at the front of the tank between the horns has the aerial coming out of the right-hand vision port and appears to be attached to the bottom right of the ‘panel’. According to Tom Wislocki, this panel was meant to dig into the earth when the wireless was in use in order to provide grounding for the radio equipment. 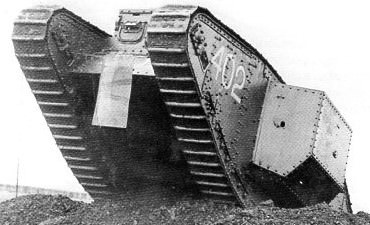 Photo: Landships Forum
Another image of ‘402’ at Biggin Hill, appears to show a flexible ‘Whip Aerial’ sticking up from the rear of the right-hand sponson. This could be the same/similar to the ‘fishing rod’ type tried out in France. 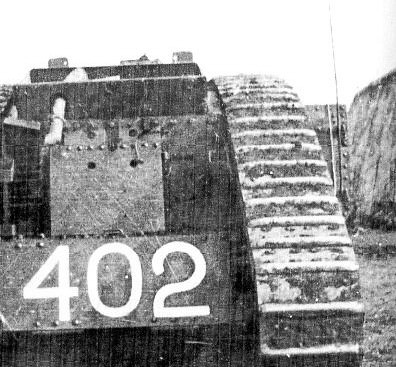 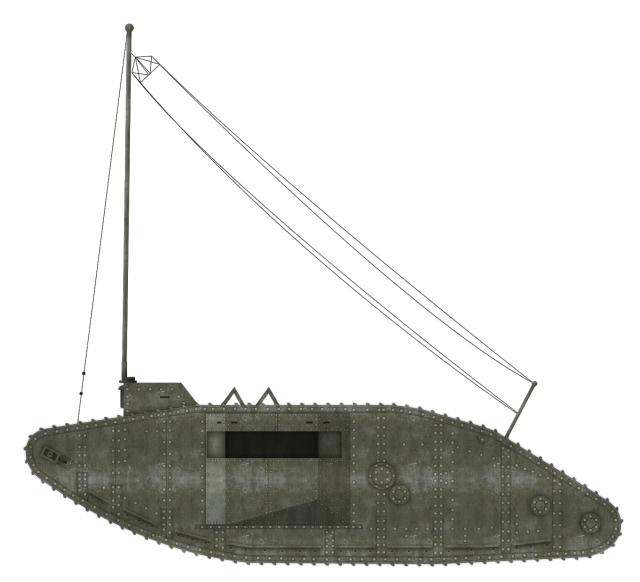 The Wireless Communications Tank based on the hull of Mk. I Female Tank. Illustration by Bernard ‘Escodrion’ Baker, funded by our Patreon Campaign.

Combat reports and corresponding photographs of the Wireless Communications tank are extremely rare. Though it is not at our disposal, there is photographic evidence of a Wireless Communication Tank in use at Neuve Eglise (Nieuwkerke) 7 miles South of Ypres in the West Flanders region of Belgium in June 1917.
It is also recorded that Wireless Communication Tanks were used during the Battle of Cambrai (November 20th – December 7th, 1917). The sets used here, however, were the standard ones used by the Artillery and were carried forward by fighting tanks. They proved to be unsuitable in combat as the antenna had to be set up outside of the tank. 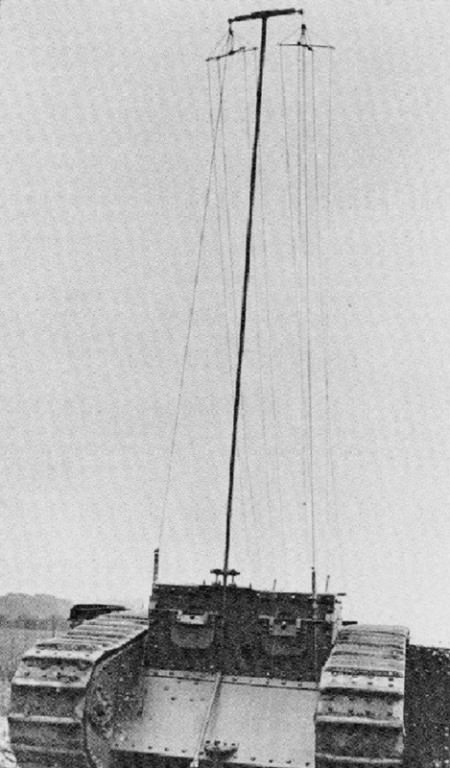 A head-on photo of the Communications tank showing just how tall the transmitting mast was. Photo: Landhips Forum
There is also photographic evidence to suggest that a least one Mark IV Tank was converted to the role Wireless Communication Tank in September 1917. There is a record of it being used around Menin Road of the Hooge area which was just 2 miles east of Ypres. This Mk. IV used that same aerial mast, but instead of it being mounted atop the tank, it was placed upright on the ground next to it.
So successful were the wireless set trials, that in August 1918, 288 Mk. III wireless sets and 96 120-watt sets were ordered by the Tank Corps. The last development in Wireless Tanks occurred in July 1918, when wireless telephones were trialed for tank-to-tank and tank-to-airplane communication. The war was over before implementation, however.

At the RAF and Tank Conference that took place at Advanced Tank Corps HQ on 1 September 1918, Colonel Hugh Elles gave the RAF information on how the Tank Corps Wireless system worked as the participants were working out how to link the RAF and Tank Corps systems to improve communications. This was reported in a letter to GOC RAF by Philip Game (BGGS of RAF) dated 4 September. A segment of this letter is presented below. 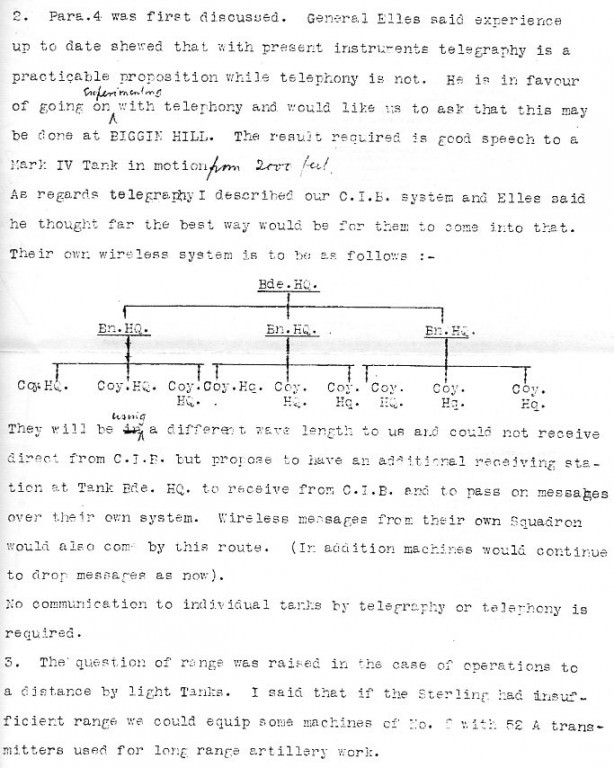 It is not currently known how many of these vehicles were built, where the conversions were made, and who by. At present, no ‘battle history’ reports have been found written by commanders of Wireless Equipped tanks in World War I.
Recently though, the Wireless Tank has been added to the multitude of tanks used in the Japanese Anime series ‘Girls und Panzer’. 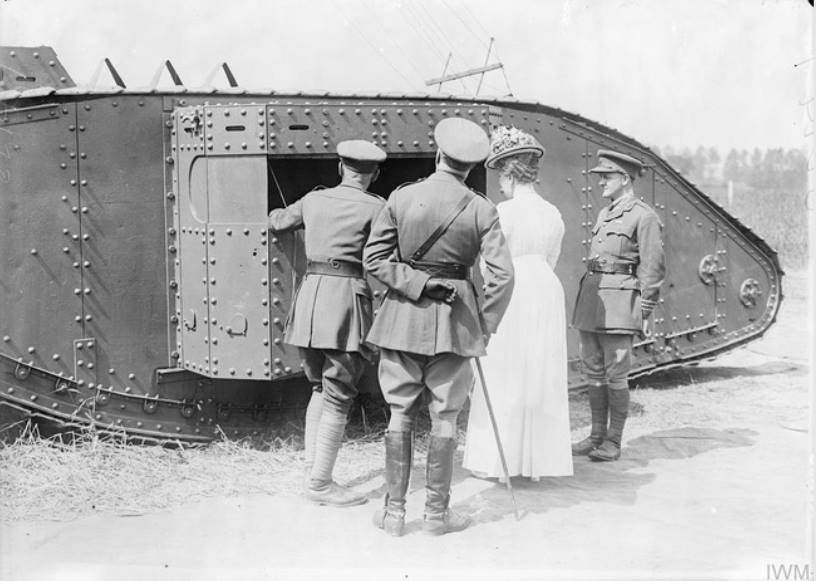 Another photo of Queen Mary of Teck and company inspecting the Wireless Tank. Photo: IWM 3232

Priestley’s ‘The Signal Service in the European War of 1914 to 1918 (France)
Communications and British Operations on the Western Front, 1914-1918’ by Brian N. Hall
The History Press, Tank Hunter: World War One, Craig Moore
Landships Forum

Ha ha. That tank would be the first shot and destroyed on a battlefield. That transmitting mast is a dead give away.

Two minor comments on an excellent article!
1) It is Queen Mary, the title “of Teck” only applied when she was a princess, before she married the future King!
2) meters indicates a wavelength, not a frequency, which was measured (then) in cycles/second (now in Hertz).

They were launched, carrying messages attached to the legs, from, from hatches in the tanks sponsons.
Too many froms…

Which one of the chaps in uniform “on the left” of Queen Mary is Mabell Ogilvy ? 😉

All fixed, thank you.
– Author

This website uses cookies to improve your experience while you navigate through the website. Out of these cookies, the cookies that are categorized as necessary are stored on your browser as they are essential for the working of basic functionalities of the website. We also use third-party cookies that help us analyze and understand how you use this website. These cookies will be stored in your browser only with your consent. You also have the option to opt-out of these cookies. But opting out of some of these cookies may have an effect on your browsing experience.
Necessary Always Enabled
Necessary cookies are absolutely essential for the website to function properly. This category only includes cookies that ensures basic functionalities and security features of the website. These cookies do not store any personal information.
Non-necessary
Any cookies that may not be particularly necessary for the website to function and is used specifically to collect user personal data via analytics, ads, other embedded contents are termed as non-necessary cookies. It is mandatory to procure user consent prior to running these cookies on your website.
SAVE & ACCEPT
13 shares