North Dakota might not be the most populous or wealthiest state in America but, in 1916, it did produce a turreted armor car design courtesy of three Austro-Hungarians living there. At that time, the United States had not even entered the war, so the intended user of the vehicle was most likely their homeland.

The designers of this machine were Joseph Gonsior, Friedrich Opp, and William Frank, all residing in the town of Medina. North Dakota might have been thousands of miles from the fighting of WW1, but war sparks the inventive mind regardless of distance, and these three men determined that their contribution to the war effort would be to:

The design was filed on the 23rd March 1916 (granted 14th March 1916). It was clearly based on a four-wheeled chassis, presumably from a commercial truck, which formed the basis of the vehicle with the engine at the front driving, via an external chain, the rear wheels, meaning the vehicle would be a 4 x 2 configuration. The driver’s position is at the front left-hand side of the vehicle in a low profile position and provided with a 180-degree vision slit. 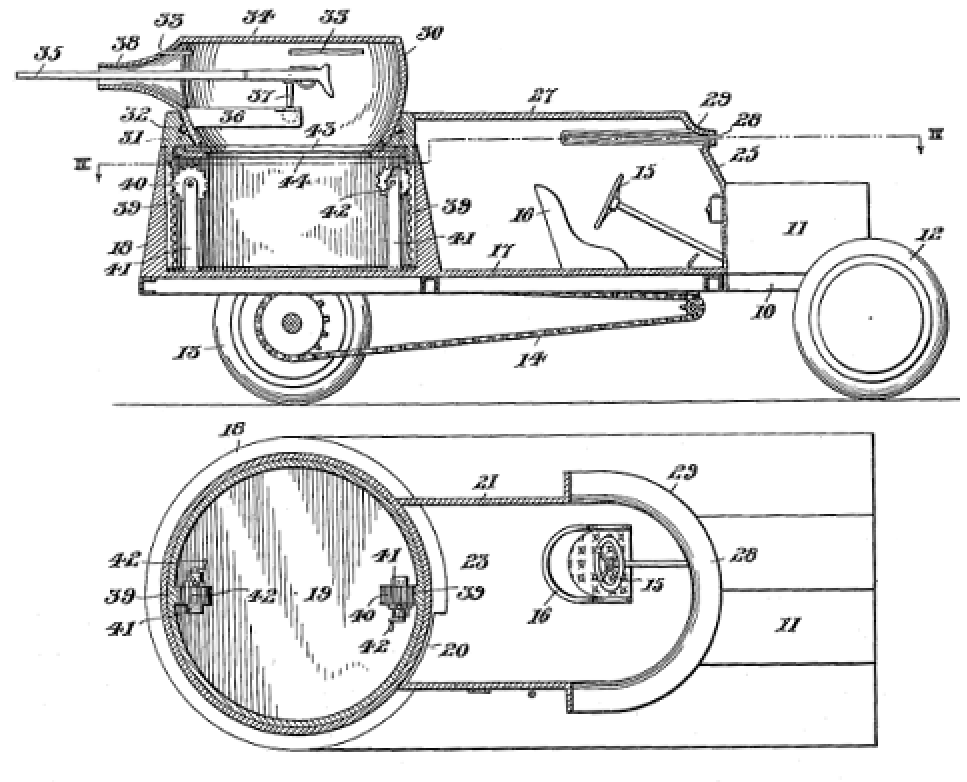 Internal view of the Gonsior, Opp, Frank War automobile showing the driver’s position and the unusual oscillating turret design. Image: Patent US1204758
Externally, the machine is a little unremarkable in terms of layout with the engine at the front along with the steering, the driver behind the bulkhead behind the engine and drive, delivered via chains to the rear axle. This is exactly how a standard truck of that era was arranged and the body is simply a truck in principle, albeit one clad in armor. There is, however, a distinctive and large frusto-conical (a cone shape with the top cut-off) structure at the back, directly over the rear axle. The cylinder tapers slightly from the base to the roof line where it is topped with a circular turret. The turret, though, is even more unusual than may appear at first glance. Instead of simply being rotatable, it also has a fixed gun and the entire turret elevates and depresses around a common pivot point. It is, in fact, one of the first known oscillating turret designs, although the elevation and depression of the turret was to be by means of hand cranks. The gun, fixed, was simply described as a rapid firing gun and had a conical shaped mantlet covering the junction between the gun and the turret, as would be expected within a patent as patents tend to outline general provisions and specifications rather than final drawings or details. By stating ‘rapid firing gun’ the patent applicants left it open as to what weapon could be used from a machine-gun to a small cannon. 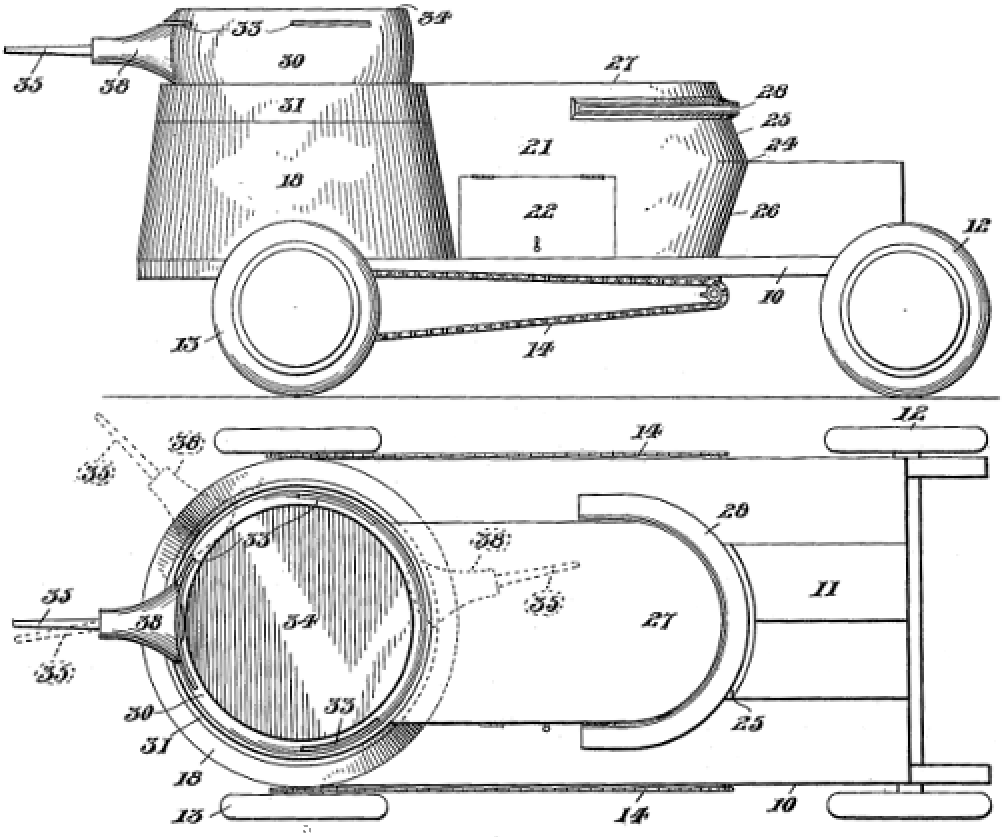 Exterior of the War Automobile showing the large access door low down on the right hand side. Image: Patent US1204758
Access to the machine was provided by a large rectangular upwards-opening door at the approximate mid-way point longitudinally on the right-hand side of the car. No other hatches are described or drawn, meaning the crew of at least two men (driver and gunner), would both have to use the same door. This would have certainly been a problem in the event of catching fire or rolling over onto the right-hand side.
Three large vision slits were arranged around the exterior of the turret at 12 o’clock, 4 o’clock and 8 o’clock respective to the position of the gun. The only other thing of note about the design is the deliberate inclusion of a space between the driver and the frusto-conical turret structure which was presumably for the storage of ammunition for the main gun. No armor other than ‘bulletproof’ is specified and there is no indication of the expected performance of such as it would be dependent mainly on the vehicle on which this might be based.

Rendition of the Gonsior, Opp, and Frank War Automobile by Mr. C. Ryan, funded by our Patreon Campaign

The designers, Gonsior, Opp, and Frank, were an inventive trio filing patents in March 1916 for a recoil mount for ordnance (Gonsior and Opp) and a revolver-sword (Gonsior, Frank and a third person, Christian Schneider). All three declared themselves as subjects of the Emperor of Austria-Hungary in March 1916 but, by May 1916, William Frank was a US citizen. Regardless of the relative merits and faults of their designs, none are known to have attracted any interest or entered production. 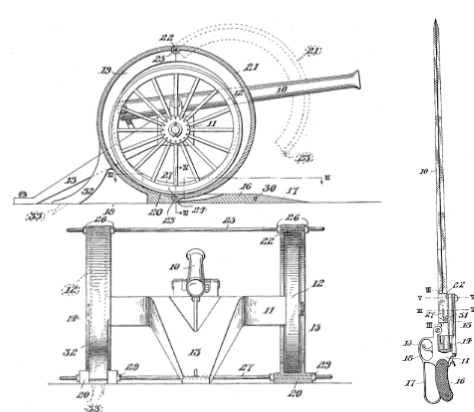 Two more of the designs from 1916 from the designers for a recoil mounting for guns and a combat weapon. Images: Patents 1204757 and 1192888 respectively

The design of the armored car, even though it was never built, is still important. It is both simple and elegant and, whilst having only a single access hatch is undeniably a flaw, the overall layout was, for 1916, very good and the use of an oscillating turret very novel. Had the armored car ever attracted any interest, then, without doubt, the lack of hatches would have become obvious to the makers and rectified. The lack of all-wheel drive though and the use of a commercial contemporary truck as a base, would likely have left the vehicle relatively slow and poor off-road capabilities with all of the weight of the armor base and turret over the rear axle.

One of the earliest known examples of an oscillating turret, eh? Also if the “Tank Encyclopedia” is going to cover armored cars then shouldn’t it be “Tanks & Armored cars Encyclopedia?” Maybe abreviate Armored car.

Does World of Tanks have only Tanks? No, they have tank destroyers, SPGs, assault guns and, lately, armored cars.
Tank Encyclopedia is just our name, we deal with all AFVs and some regular military vehicles as well. We will not change our name 🙂

This thing seem pretty good. The three Austrians from South Dakota did a good job designing it. Although the chain drive is a little vulnerable in my opinion. If that thing went over a mine (or maybe a grenade) the car might be going real slowly or come to a complete stop.

If they went over a mine, going slowly after would be the least of their problems.

“….and a combat weapon.” that’s a pistole sword

Grew up in SD, been to every town; never was a Medina in South Dakota, and the patent states Stutsman county, -North- Dakota, where Medina is very much existent.