“To the victor, goes the spoils”. The old proverb is often true of modern warfare as well. During the Second World War, the German Wehrmacht made very intensive and extensive use of captured armor to fulfill a wide array of roles, from security vehicles to hulls used to create tank destroyers and self-propelled guns. These vehicles are known as Beutepanzers. Prior to 1941, the vehicles captured in the greatest numbers and used most intensively were French tanks, due to the fall of the country and its large tank force to Germany in May-June 1940. However, it is often swept under the rug that Germany captured and reused some British equipment too. A considerable number of armored vehicles was left behind by the British Expeditionary Force (BEF) as it evacuated France in June 1940. Of these, a number of Mark IV Cruiser tanks are notable as these were, for a short time, actually employed by the Wehrmacht during Operation Barbarossa, albeit with poor results.

As its name indicates, the Cruiser Mark IV was the fourth adopted model of the series of British Cruiser tanks, designed around high mobility at the cost of armor protection. The vehicle shared the A.13 designation with the fairly similar Cruiser Tank Mark III (A.13 Mk I), of which it was an improved version of.

The main features of the design were a front armor increased to 30 mm from 14 mm on the Mk III, a three-man turret armed with the 40 mm 2-Pounder anti-tank gun, a Christie suspension, and a powerful 340 hp engine that allowed for a high maximum speed of 48 km/h (even higher in trials). Overall, the design could be said to be fairly solid for the early war. A three-man turret was a feature not too common outside of German medium tanks, the 2-Pounder had good performances against early German tanks, the design was fairly mobile and 30 mm of armor, though it would not protect against 37 mm anti-tank guns, was still not particularly on the lower end of highly mobile tanks in the same weight class and role as the Mark IV, such as the Soviet BT-7, for example.

A number of Cruiser Mark IVs were deployed within the 1st British Armoured Division sent to France as part of the British Expeditionary Force to fight against German troops. Though the Germans claimed the British lost 65 Mark IV in France, only about 40 appear to actually have been deployed there, with the overestimation perhaps due to confusion with the very similar Cruiser Tank Mk III (A.13 Mk I) and simple overestimation. With the campaign of France quickly turning disastrous after the German breakthrough at Sedan on 13th May 1940, the encircled British Expeditionary Force barely made it out during the famous Dunkerque episode – in which it left all of its heavy equipment, including whichever Mark IV had not been lost in combat, behind.

The fall of France in 1940 had left the Germans with a tremendous quantity of captured tanks, or tanks abandoned with various degrees of potentially repairable damage, in their hands. The majority of these were French, and the German quickly set up infrastructure to recover these tanks and send them back to the French factories they captured for potential repair. A non-negligible amount of British tanks were also left behind. However, the issue was that, unlike for French tanks, the Germans had not captured the factories that were producing these tanks or their spare parts alongside the fleet, which made repairing and re-using British armor a much harder affair. This meant that, in general, British tanks were used in much smaller numbers and were much more discreet than their French counterparts in German hands.

Among the vehicles that were recovered were at least nine Cruiser Mark IV tanks, the most modern Cruiser type available to the British army at the time. These were given the German designation of Kreuzer Panzerkampfwagen Mk IV 744(e). Kreuzer Panzerkampfwagen was a mere German translation of their British designation as Cruiser tanks. The number in the 700s indicated a tank; the (e) indicated the vehicle’s country of origin, in this case, the United Kingdom (Englisch).

These nine Cruiser Mark IV tanks were assigned to a rather curious armored unit. In October 1940, they were delivered to Panzer-Abteilung (f) 100. The (f) stood for Flammpanzer. This was a unit centered around the Panzer II (f) Flamingo flamethrower tanks, with the Kreuzer-Panzer added alongside some Panzer IIs to provide more general-purpose supporting fire for these more specialized vehicles. It appears that, outside of these nine Cruiser tanks, some others, perhaps up to six, were sent to the German trials center at Kummersdorf to be evaluated, and a small number of others may have been used by security units, though this is not documented. 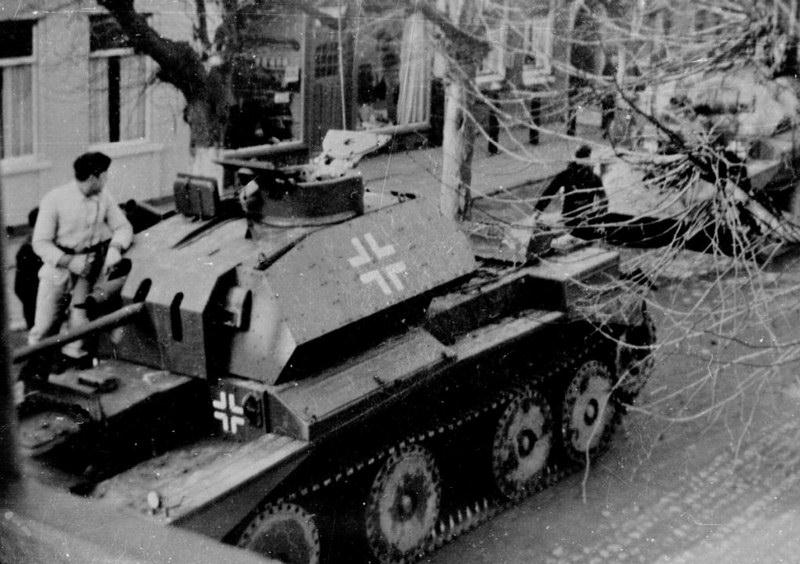 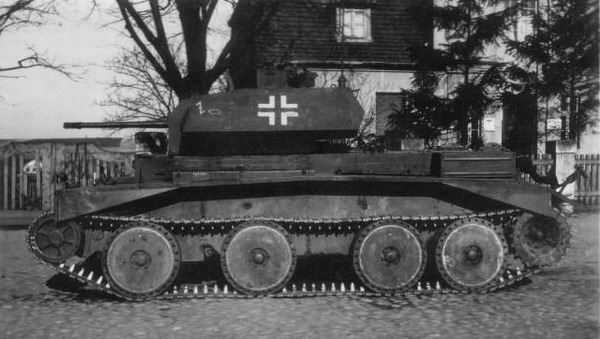 Panzer-Abteilung (f) 100 was stationed in the Dutch city of Terneuzen and village of Zaamslag, located in the southernmost part of the Dutch province of Zeeland, just north of the Belgian border. It stayed there from October 1940 to May 1941. During this time, the unit appears to have taken part in exercises in preparation for the hypothetical invasion of Great Britain, Operation Seelöwe (Sealion). It appears that at least one of the vehicles was loaded into some sort of landing barge during an exercise. As such, in the pretty much materially impossible scenario in which Seelöwe could have occurred, one would likely have seen a small number of Kreuzer-Panzer used by the Germans against their original manufacturers. Though details on the nature of the tanks’ stay in the Netherlands is unclear, they may, more pragmatically, have been used to familiarize German tankers with the vehicles they would have faced fighting against the British, a role in which they could have proved a useful tool.

In May 1941, Panzer-Abteilung (f) 100 moved from its location in Zeeland to the Polish town of Murowana Goślina, North of Pozen/Poznan, and later near the Soviet border at Sielce. The unit was attached to 18. Panzer-Division and was to support its advance into the Soviet Union.

Panzer-Abteilung (f) 100 comprised three companies. On 22nd June 1941, it appeared to have at its disposal, outside of the 9 Kreuzer-Panzer, 5 Panzer IIIs, 25 Panzer IIs, and its main force, 42 Flammpanzer II Flamingos.

By this point, the Cruisers had been in German service for several months and had received a number of changes to integrate them into German units. Their original tracks had been replaced with tracks from the Panzer II Ausf.D1. The reasons behind this are unclear, but may very well be logistical, particularly as the Panzer II (f) also operated by the unit were typically converted Ausf.D chassis. The vehicles had also received Notek lights and shelves to hold jerrycans. One was given a tow hook to tow the French trailer originally designed for the Renault UE, which was widely used by the unit.

Kreuzer-Panzers numbered N°141 to 144, 243 and two with numbers starting with 24 but with the last number unidentified have been found. As the first number in German tank numbering system indicates the company the vehicles served in, it appears the Kreuzer-Panzer served in at least two of the unit’s three companies, and with three numbers missing, the third company may very well have had their British Beutepanzer as well. Within the fairly diverse fleet of armored vehicles operated by such a small unit, the Kreuzer-Panzer were, alongside the five Panzer IIIs, the tanks with the best anti-tank capacities, far exceeding the 20 mm autocannons of the Panzer II, let alone the flamethrowers of the Flamingos. As such, the tanks being distributed in the unit’s companies may have been undertaken in order to provide protection to the flamethrower and autocannon-armed Panzers against Soviet tanks. The 2-Pounder was a very decent anti-tank gun by 1940. By 1941, it would still easily dispose of most Soviet tanks, the likes of the T-26, BT-5, BT-7 or T-28, however, it would largely struggle against T-34s and could realistically only penetrate them from the sides and at fairly short ranges. Against KVs, the gun was fairly hopeless to do anything outside of potentially damaging the tracks. 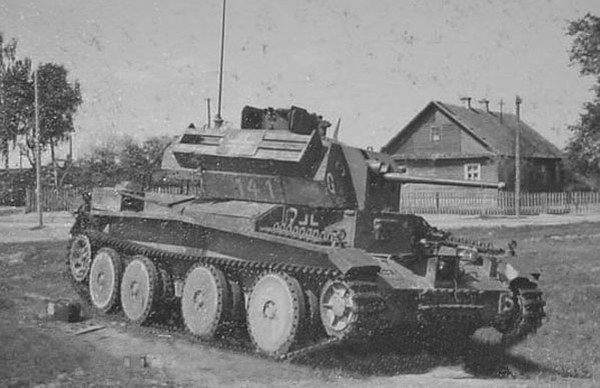 Conclusion – A swift end to the Kreuzer-Panzers

As Panzer-Abteilung (f) 100 headed into the Soviet Union alongside 18. Panzer-Division, it was heavily engaged in a number of battles, including the battle for Brest fortress, and less than ten days into the operation, was already past Minsk. However, the service of the British tanks in Operation Barbarossa would be very short. While there are no details on the precise performances of the tanks, the Kreuzer-Panzers would likely have proven very vulnerable to any form of Soviet anti-tank opposition. More than their thin armor protection though, the final blow to the vehicle’s service within the Wehrmacht appears to have been a question of reliability. With few spare parts, most tanks swiftly suffered breakdowns that could not easily be solved. It is known that by 11th July 1941, not even a month into Barbarossa, no Kreuzer-Panzers were left operational, and this appears to have been unchanged all the way to Panzer-Abteilung (f) 100 being retired from the front in November 1941. Though it is possible that some Beutepanzer Mark IVs were still serving in some security units in other parts of German-controlled Europe, there does not appear to be any evidence confirming this, and as such, German use of the Kreuzer Panzerkampfwagen Mk IV 744(e) may very well have ended within the first weeks of Barbarossa. 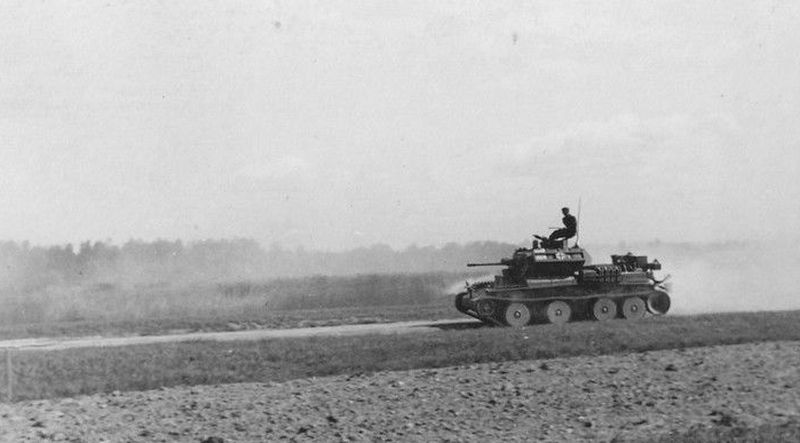 Despite its short life in the German Army, the Kreuzer-Panzer Mk IV 744(e) remains an interesting example of the large variety of uses Germany made for its Beutepanzers during the war – and has the dubious honor of being one of the few Beutepanzer types used on the frontlines during Operation Barbarossa, albeit only for a short period of time.

I am going to specuate here that each company of PzAbt. 100 (f) had a platoon of gun tanks, and from the tank number information you have, the likely composition was that one company initially had five A13s, a second four A13s and the third had the five Panzer IIIs. Note that the Panzer IIIs would probably been the Ausf. F with the 37 mm gun and so served the same function as the British tanks.

The tracks in the illustrations are not correct! The real tracks had only one row of guiding teeth in the middle, not two rows in the sides.