The origins of the Lamborghini Cheetah lay in California in the 1970s from the same ‘stable’ at Mobility Technology International (MTI) by designer Rodney Pharis, as the XR-311. The Italian firm of Lamborghini was also interested at the time in lucrative contracts supplying a mobile off-road vehicle to the American and Italian Armies and possibly for export too. The two firms entered a partnership in the mid-1970s, with MTI responsible for development in the USA and Lamborghini responsible for a lot of the design elements. 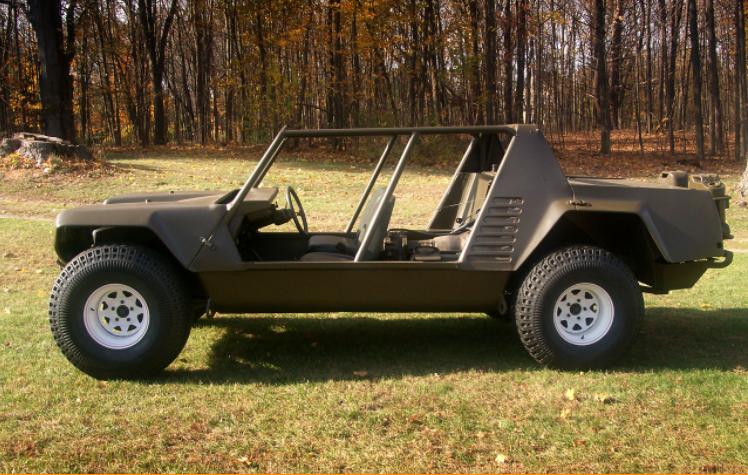 Lamborghini Cheetah. Source: lambocars.com
Lamborghini continued with development and presented the Cheetah to the public at the Geneva Motor Show on the 17th of March 1977. It drew a lot of attention and received orders for undisclosed amounts to some unnamed Middle Eastern countries. When the vehicle returned to the USA later that year, it ended up in Nevada (some sources say California) for trials where a commercial was filmed (see video at the foot of this article). Reportedly two vehicles were in existence by this point presumably a second one having been made by MTI which the first one was being shown at trade shows. It is also reported that during those trials one vehicle was destroyed in an accident. 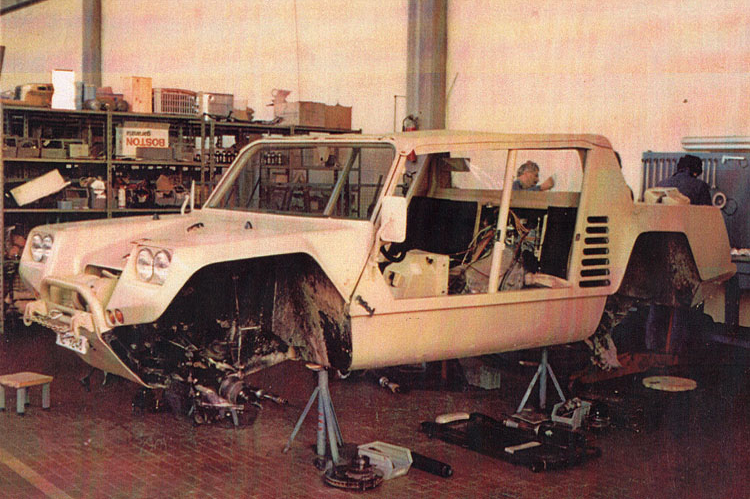 Prototype Lamborghini Cheetah during construction. Note the Lamborghini badge on the bonnet. Source: lambocars.com
The Cheetah was marketed as being suitable for military use for several roles and could be fitted with a variety of weapons and armor kits as well as advanced communications equipment. These included: 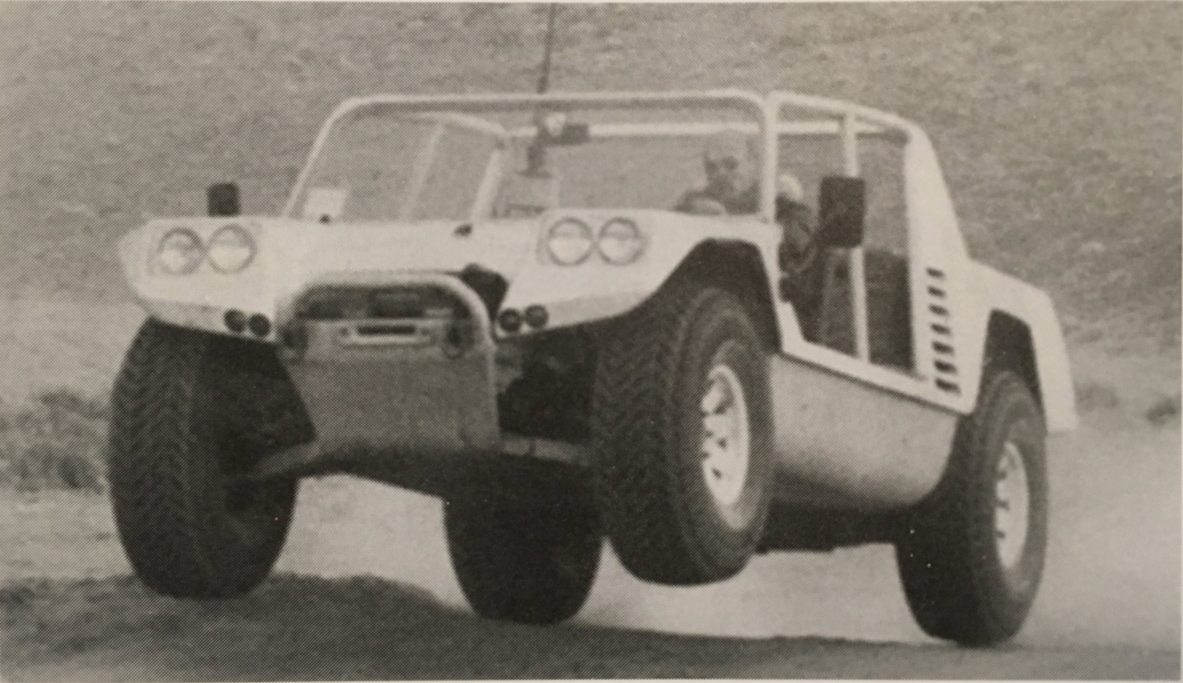 Lamborghini Cheetah during trials. Source: Bill Munroe
As it was, the US military never got to test the Cheetah. MTI, who were a subsidiary of Chrysler at the time, sold their rights to the design to Teledyne Continental and began work on three Cheetah vehicles for them instead. Lamborghini left the entire project and continued with their vehicle. However unlikely it may have been that Lamborghini would win the US contract, the only restriction on the sales of the vehicle from the US Government were to be that as part of the contract was to be no civilian sales in the USA. 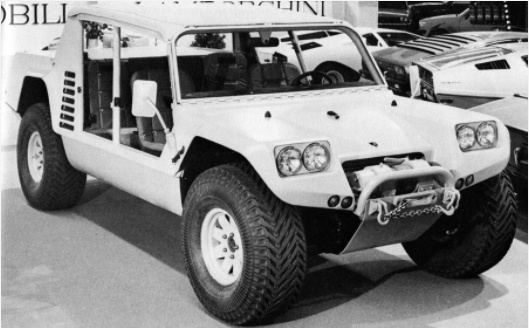 Lamborghini Cheetah as seen at the 1977 Geneva motor show. It features the Lamborghini badge on the bonnet. Source: ruoteclassiche.quattrouote.it

The design itself featured a steel tubular frame which acted as a roll cage too and a steel belly plate which permitted it to slide over obstacles. The engine, a 190 hp 5.9 litre V8 petrol made by Chrysler, was an attempt at ensuring a contract with the US military who would not have accepted a vehicle with a foreign motor. It was mounted in the rear and seating was provided for 4 crewmembers. The vehicle had 4 wheel drive and used large tyres to improve traction and floatation on soft surfaces, such as sand or boggy ground. 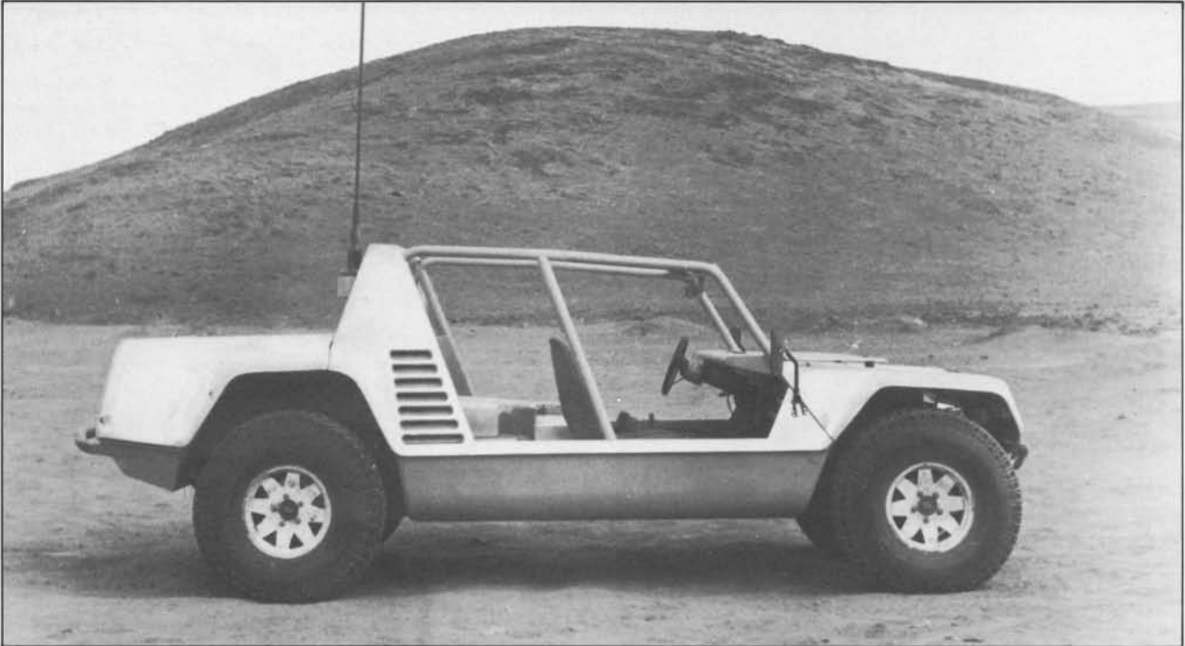 Lamborghini Cheetah during trials. Source: Wheels and Tracks # 4
The body work on the original was fiberglass to keep weight down but the vehicle shown at the 1977 Geneva show had a steel body. Despite the potential of the vehicle, it received no military contracts and the design was eventually dropped although, in an odd twist, in May 1981, John DeLorean (DeLorean Motor Company) wrote to MTI expressing interest in a business plan to develop the Cheetah and a more fuel efficient version of it – nothing is known to have come from that expression of interest and this may be because Lamborghini went bankrupt in February 1980 and was sold off the following year to two Swiss entrepreneurs. 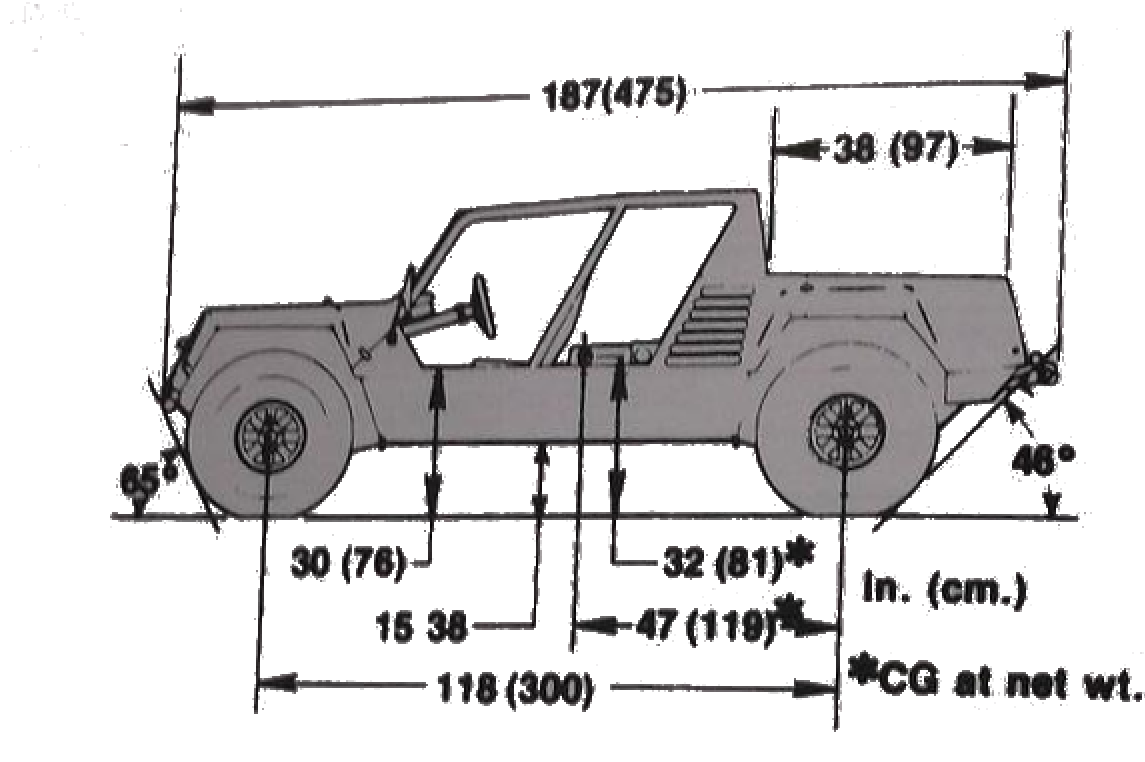 Schematic of the Cheetah

Illustration of the Lamborghini Cheetah, produced by Andrei ‘Octo10’ Kirushkin, funded through our Patreon Campaign

The concept was reborn at the hands of Lamborghini engineer Giulio Alfieri in 1981 as a new vehicle called the LM001 (Lamborghini Militaria 001). It was a two door vehicle featuring a rear mounted 180 hp 5.9 litre AMC V8 and was shown at the 1981 Geneva Motor Show. the design had problems though, the weight balance was poor as the large engine was placed high in the back badly affected handling at high speed and off-road. It was a failure and was not adopted by any armed forces.

LM002 as prepared for the Italian Army, fitted with GPS, a mount for single 7.62mm machine gun and a pedestal mount on the back for a heavy weapon platform.
The outcome was a third attempt, the LMA002 (Lamborghini Militaria Antiore 002) with a new tubular chassis and suspension, fiberglass and aluminum body. The LM002 was prepared with a mount for a 7.62 mm machine gun fitted to the front right-hand side above the driver’s seat and a pedestal mount in the rear for a heavy weapons position. It was presented to the Italian Army on the 3rd of June 1982 but the Army did not adopt it as at the time they had no requirement for a desert vehicle.
It was shown off at the Brussels Motor Show in 1986. The engine in that vehicle was the 5.167 liter 450 hp V12 LP500S from the Countach sports car and did receive orders going into production as the LM002. Forty such vehicles were subsequently ordered by the Royal Guard of Saudi Arabia with a large roof hatch and 330 (including all LM001 and LM002) in total were sold, most of them to wealthy civilians. A single version was also sold to Libya for evaluation. A final version, the LM003 was prototyped as a diesel engine version specifically for the military but it received no orders.
The LM002 was also later known as the LMA with the ‘A’ for ‘American’ when it was shown at the 1992 Detroit Motor Show. 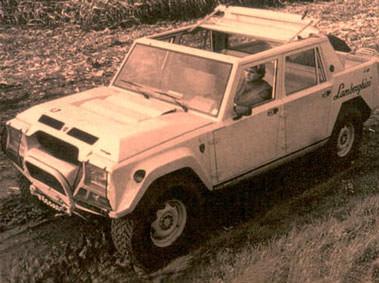 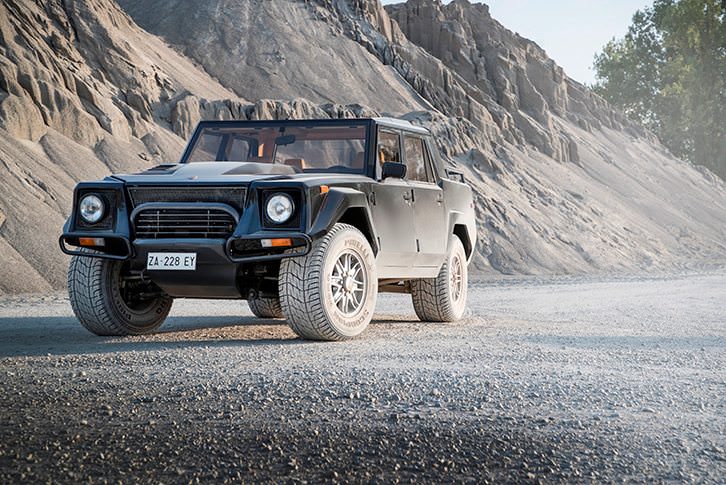 The US Army Gets its Lamborghini – Finally

The LM002 had managed what the Cheetah did not – orders. Less from the military but mainly from Middle Eastern oil sheiks (no surprise considering the sales brochures were also published in Arabic at the motor shows) and were seen fitted with blast-proof flooring and ballistic protection fitted. This is how the US got their Lamborghini – not a Cheetah but an LM002, one which had belonged to the son of Saddam Hussein. Uday Hussein’s LM002 was found by US forces in July 2004 near Baqubah in Iraq.
Presumably unaware of the scarcity and value of the vehicle these US troops filled the vehicle with explosives and completely destroyed it.

US troops in Iraq 2004 with Uday Hussein’s Lamborghini LM002 preparing it for demolition. Source: carscoops.com 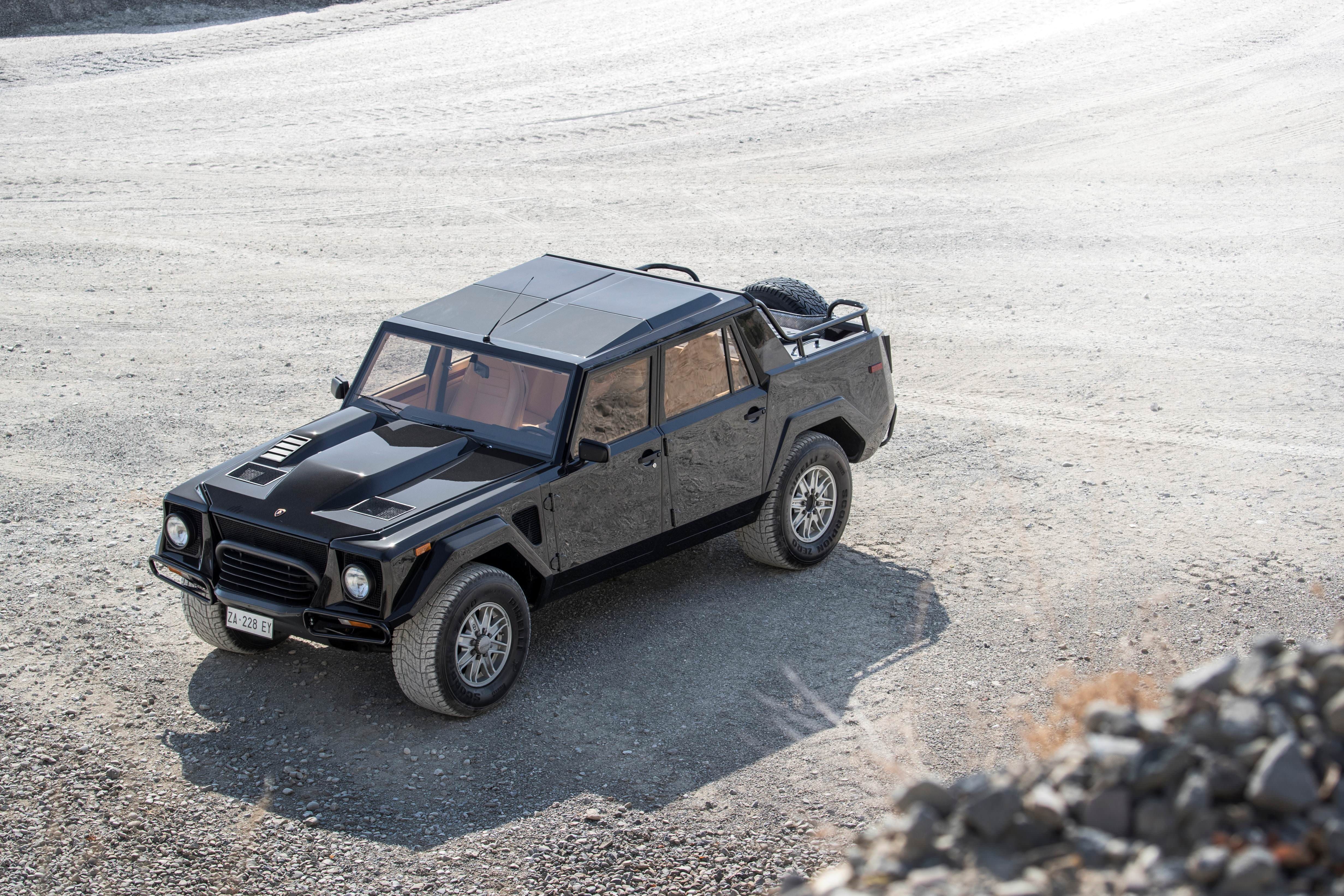 lol “Shoot first ask questions later” came across my mind when I read that US troops destroyed Uday’s LM002..

The Cheetah was an influence on the G.I. Joe V.A.M.P. toy from 1982. The same lines, but only seating two, with a remote control twin-gun turret on the back deck.