Though it did not have much of a chance to prove itself in action, the Rocket Launcher T34, famously known as the ‘Calliope’ after the steam organ, was a relatively successful weapon.
Mounted above the turret of the Medium Tank M4, the launcher was a great area-of-effect weapon. Despite this, work continued on upgrading the T34, specifically its firepower. This led to the development of a completely new weapon, which would be capable of launching 7.2-inch (183mm) demolition rockets. This weapon was the 7.2in Multiple Rocket Launcher M17. 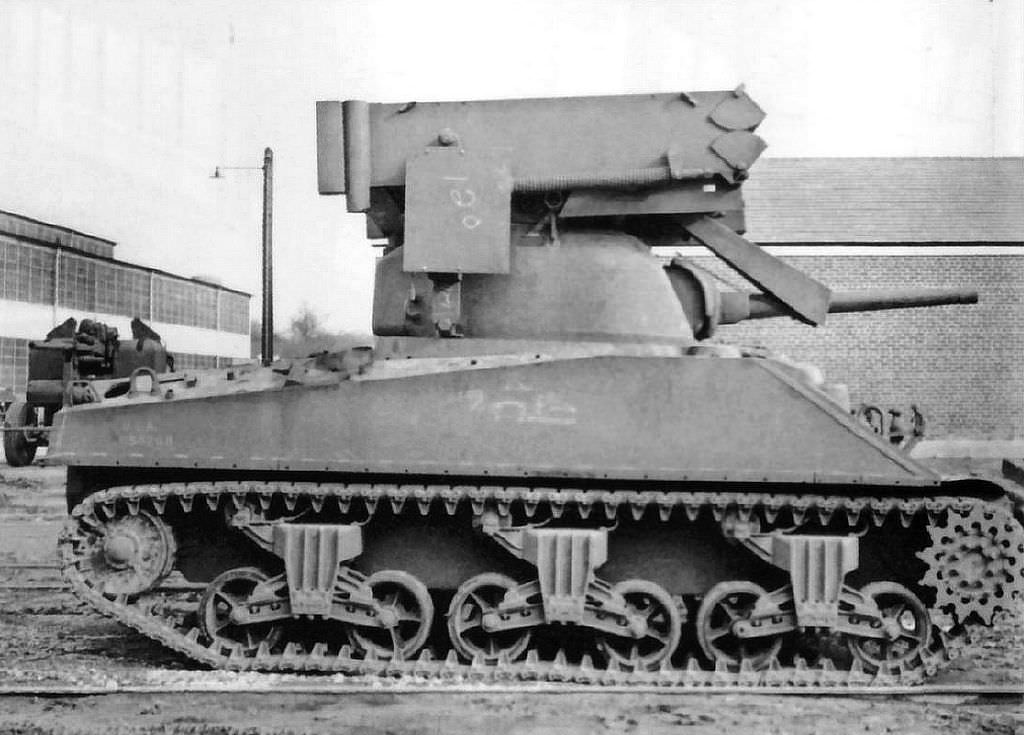 The tank started life in 1941 as the T6 and was later serialized as the Medium Tank M4. Entering service in 1942, the tank soon became a workhorse, not just to the US Army, but the Allies too.
The 7.2in Multiple Rocket Launcher was mounted on multiple iterations of M4, including M4A1s and A2s. All of the tanks the ‘Whiz Bang’ was fitted to were armed with the standard M4 weapon, the 75mm Tank Gun M3. This gun had a muzzle velocity of up to 619 m/s (2,031 ft/s) and could punch through 102 mm of armor, depending on the AP (Armor Piercing) shell used. It was a good anti-armor weapon, but it was also used to great effect firing HE (High-Explosive) for infantry support.
For secondary armament, the M4s carried a coaxial and a bow mounted .30 Cal (7.62 mm) Browning M1919 machine gun, as well as a .50 Cal (12.7 mm) Browning M2 heavy machine gun on a roof-mounted pintle.

The Calliope was a bombardment weapon designed to clear paths for attacking infantry units. It was mounted above the turret of the M4 and was attached to the gun which would provide elevation and depression control. The launcher rack consisted of 60 launch tubes, each holding one high-explosive filled 4.5-inch (115mm) rocket.
The rockets had a range of 4200 yards (4 km). Though not accurate individually, when launched together, the rockets were a great area-of-effect weapon. The launcher was a demoralizing piece of equipment for an enemy on the receiving end. Just the shriek of the rockets slicing through the air was often enough to dissuade enemy troops from persisting in the fight.

The quest for increased firepower resulted in the development of the 7.2inch T37 demolition rocket. This 61-pound (27.6 kg) projectile was derived from a naval anti-submarine weapon known as ‘Mousetrap’. This was, in-turn, a development of the famous ship-mounted Hedgehog mortar – the difference being that the Mousetrap was rocket powered. This projectile carried 32-pounds (14.5 kgs) of plastic explosives. It had a low velocity of 160 feet-per-second (49 m/sec), resulting in a short range of just 230-yards (210 meters). A boost to the projectile range came with the T57. This was simply a T37 with the motor from the Calliope’s 4.5-inch rockets attached to the base. This increased the effective range to 1200 yards (1 km).
The 7.2 inch T37 rockets were designed to be used at a relatively close range as a demolition weapon that would breach enemy defenses or simply blow them away completely. To protect them during these close range engagements, the launchers would be armored. The T40 became the most popular of these armored launcher rigs, and it was soon serialized as the 7.2-inch Multiple Rocket Launcher M17. 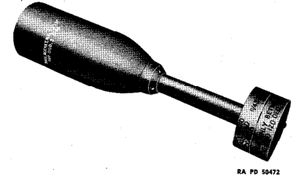 The T37 Demolition Rocket. Photo: Presidio Press
Like the T34 Calliope, the launcher was mounted above the M4’s turret. Also like the Calliope, the tank’s 75mm gun controlled the launcher’s elevation and depression. In this case, the range was +25 to -5 degrees. When not in use, and for loading, the launcher would rest on the turret roof. For firing, the launcher would raise up and slightly forward, just under a meter clear of the turret roof. The launcher carried 20 of the 7.2in rockets on two rows of 10 rails that were 90-inch (2.2 m) long. Rockets could be fired individually or at ½-second intervals.
The launcher was completely encased in armor that was ½ inch (12.7 mm) thick. The front of the launcher was protected by two armored doors which open vertically to expose the launch rails. The doors were operated by hydraulics which was controlled from inside the turret of the tank. Empty, the M17 weighed 2.2 tons (2 tonnes) and could be jettisoned if required. 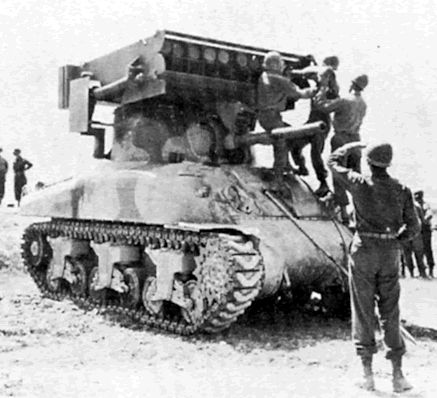 M4A1 ‘Whiz Bang’ in Italy being reloaded. Photo: US Archives 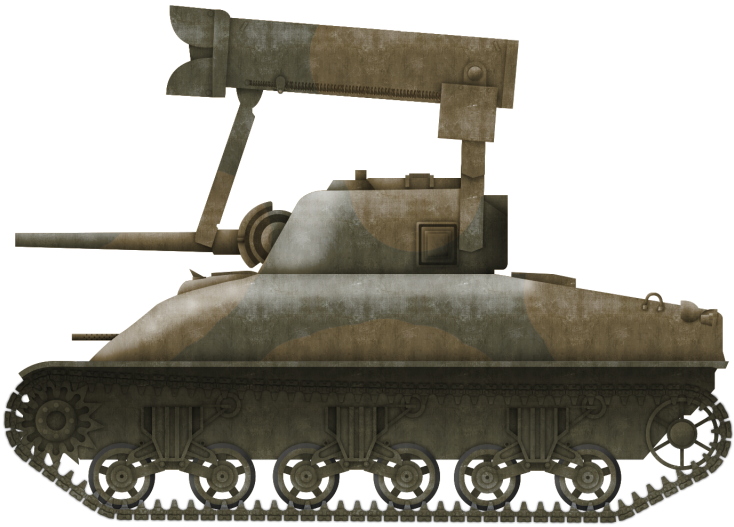 Illustration of an M17 ‘Whiz Bang’ equipped M4 Sherman, produced by Bernard ‘Escodrion’ Baker and funded by our Patreon Campaign.

Little is reported about the M17s in service, but we do have a few points of note available to us.
The M17 did not see a great deal of action during the war. Like the Calliope, there was a plan to use tanks armed with the launcher during the D-Day landings. The plan was for them to clear beach obstacles for the attacking troops and armor. Delays in the development of the weapon, however, meant that the final model came too late to be incorporated in the invasion. 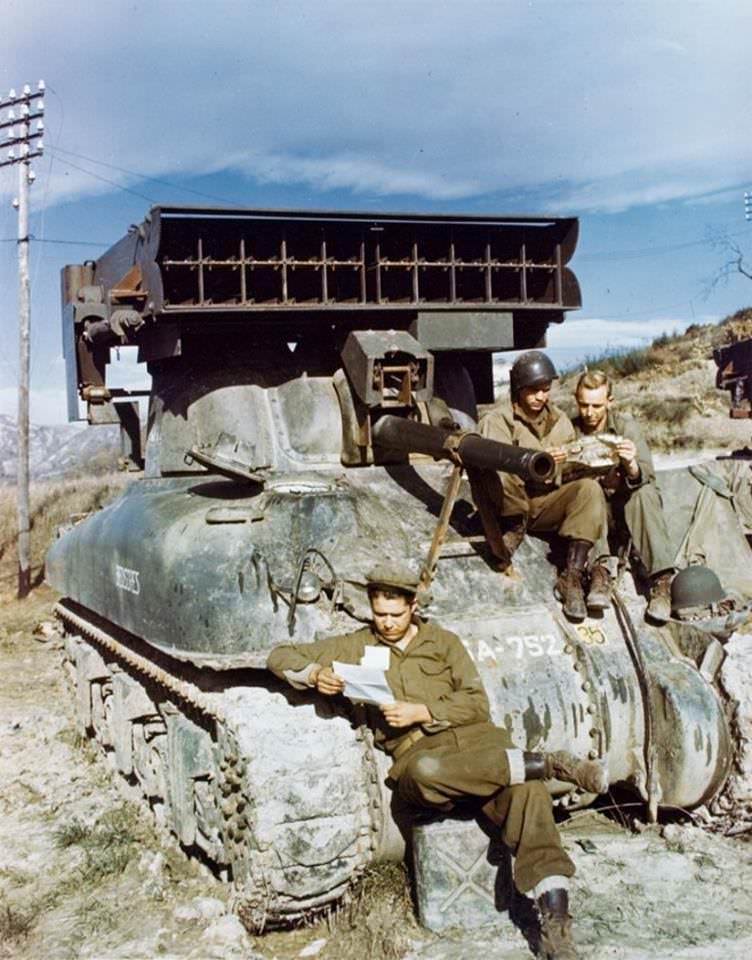 A ‘Whiz Bang’ armed M4A1 in Italy. Photo: US Archives
After the Normandy landings, the weapon did see the limited use in operations in North West Europe, as well as Italy. It soon received the nickname ‘Whiz Bang’ from troops. A small number of the launchers were put in reserve for use on the Ardennes Front, but the preemptive German assault meant the M17s went unused.
In 1944, the United States Marine Corps, fighting the Japanese in the Pacific, trialed both the Calliope and Whiz Bang. Despite positive tests, neither went on to serve with the Marines. This is, perhaps, a shame as the Whiz Bang may have proved to be an effective means of disabling the tough Japanese bunkers encountered later in the Pacific Campaign. 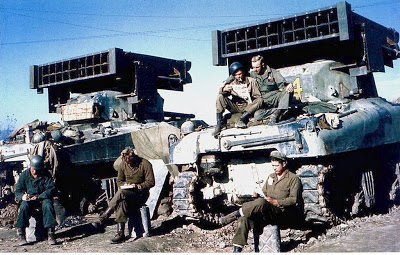 The T67 was a limited production upgrade of the M17, designed to be mounted on engineer vehicles. It also featured a new fire control system and the ability to fire the 7.2-inch rocket with either a 2.25 (57mm), 3.25 (83mm) or 4.5-inch motor.
The T73 was developed with the idea of protecting the launcher as much as possible. It differed in design quite drastically, as it only carried 10 rockets on 50-inch (1.2 m) rails. The armor thickness on this model was thicker than the M17s, with 1 inch (25 mm) of armor at the front and ½ inch (12.7 mm) of armor on the top and bottom. 1 inch of armor was enough to protect the rockets from .50 caliber (12.7mm) rounds. The mostly ½ inch armor of the M17 could only stop .30 Caliber (7.62mm). Like the T34 and M17, the launcher rotated with the turret, but this was the first launcher of the type to be independent in elevation and depression which was controlled by an electric drive. The launcher had an elevation range of +45 to -5 degrees. When no longer required, the launcher could be jettisoned by hydraulics controlled from inside the tank. This launcher could also take rockets with a 2.25 (57mm), 3.25 (83mm) or 4.5-inch motor.

This increased the effective range to 1200 yards (2 km). Perhaps this should be closer to (1km)

There also seems to be problem to the link to the patreon image.

Seems to work fine on our end, what issues are you seeing?

The figure above the following comment just shows as a blank space – “Illustration of an M17 ‘Whiz Bang’ equipped M4 Sherman, produced by Bernard ‘Escodrion’ Baker and funded by our Patreon Campaign.” When I right click and try to view image in Firefox i get a 404 error. All the other images work fine.

Huh, that is peculiar. Convinced it to return to better feelings.

hopefully War thunder adds this to the t34 calliope