When the Home Guard first began in 1940 (under the name ‘Local Defense Volunteers’), there was barely any provision of weapons due to the huge loss at Dunkirk forcing arms production to go directly to the main core of the armed forces. Even with orders placed with the US for old WWI weapons, the HG still lacked firepower, thus leading to Volunteers carrying shotguns, knives on brooms, and even breaking in to museums in order to appropriate weapons. Vehicles were no exception. To mount an effective defense and rapid response against German paratroopers, vehicles were seen as a necessity. This article will focus on Lance Corporal Jones’ Van (unofficially named the Walmington-on-Sea APC in this article’s title), which was a humble butcher’s van converted into an APC/Ambulance, for the Walmington-on-Sea Home Guard.
Of course, the vehicle came from the hit British comedy TV series Dad’s Army (BBC, 1968-1977), and was a plot point for only one episode of the show, and after that, a recurring, but minor gag. For the purposes of this April Fool’s article, a section on the story of the van (according to the show’s canon) has been written, followed by a speculative section on how the vehicle might well perform in real WWII combat. There is a section on the van in real life which gives a glancing look at its history after the end of the show, and there is also an integrated overview of real life Home Guard armored vehicles.

The idea came from two members of the Home Guard from the coastal town of Walmington-on-Sea. In roughly March, 1941*, Private Walker convinced Lance Corporal Jones, the local butcher and five-time war veteran, to loan his 1935 two-ton Ford BB Box Van to the platoon as transport, in order to gain petrol coupons from the military (and so that Walker may also use the van at night to “transport certain things“).
After working “practically non-stop” over three days, the van was converted into an APC. It was hardly luxurious. There were no seats provided to sit on in the rear of the van, although there were also roughly four racks provided for stretchers, which also doubled up as seats. It was also hardly sophisticated – sandbags were placed knee-high, which “made it bulletproof“, and marble slabs (as taken from Jones’ Butcher’s shop) were placed on the floor in order to make the vehicle landmine-proof; although these slabs were ordered to be removed until an actual invasion takes place. There were five pistol ports on each side of the truck, and another five on the roof for shooting at aircraft.
However, the roof-portholes would be useless after their demonstration to the rest of the platoon. Captain Mainwaring had telephoned GHQ about the vehicle and the reply was that the vehicle should be taken to RAFC transport pool and converted to gas power in order to save on petrol. This led to the van having a large balloon of gas placed on top with a pipe leading down the crew cabin, which fueled the engine.

The biggest limitation of the vehicle was its gas powered system. The balloon on top now meant that it has hardly an aerodynamic vehicle. Worse still was its safety – the fuel pipe was very brittle. During the drive back to Walmington-on-Sea from the RAFC transport pool, Lance Corporal Jones’ bayonet accidentally put a hole in the pipe, which caused both him and Walker to laugh and sing incessantly, feel light-headed, drive erratically, and even a gas-explosion was almost caused when Walker lit a cigarette. If the vehicle were to see any combat, it would take only a few rounds from small arms to render the vehicle little more than a static pillbox.
With space for roughly 5 passengers, plus a driver and co-driver, it was also hardly a spacious vehicle – Bedford and Opel Blitz trucks could carry at very least 12 soldiers and two drivers.
The inclusion of the marble floor slabs is also dubious. Whilst not only making the vehicle heavier, it is unlikely that they would protect against landmines. In fact, they would probably create more shrapnel, thus making the vehicle a huge hazard.
The vehicle’s capabilities were also directly correlated to its crew’s competence – something that was lacking. For example, Lance Corporal Jones once forgot the key for the rear doors during a first aid exercise, thus meaning that all crew and casualties would have to embark through the small hatch in the cab. Communication between the driver and platoon commander was also done by banging on the side of the van. This was a highly confusing system, which meant that the vehicle often drove off before its crew could embark on several humorous occasions.
One good thing to say about the vehicle is that it had an ingenious camouflage system. By keeping the original paintwork, it would hardly be associated with military purposes, thus meaning that it would be inconspicuous during a German invasion, and would not necessarily be stopped at German checkpoints.

The W-o-S APC in reality

In real life, the van was found in a terrible state in Streatham, London, by Frank Holland, a BBC assistant property manager, and was fixed up for use during the filming of the hit comedy-WW2 TV series, Dad’s Army. The first episode the van featured in was “The Armoured Might of Lance Corporal Jones“, season 3, episode 1, and could be seen in further adventures in the fictional town of Walmington-on-Sea, mainly used as general transport for soldiers. After Dad’s Army ended, it was sold to a Ford Dealer in Finchley, and sold again in 1990 to the Patrick Motor Museum, Birmingham for £11,200 ($16,197). It was then sold at auction with four manikins of Dad’s Army characters in 2012 by Bonham’s for £63,100 ($91,256). It was bought by a syndicate of two Norfolk families for the Dad’s Army museum (located in Norfolk), although since its purchase, there has been fundraising in order to repay the families. In February, 2016, apprentices at the Ford Dagenham plant gave the vehicle a full mechanical overhaul.

Using Jones’ van as an APC was not exactly a far cry from the reality of the real Home Guard. Details of Home Guard improvised armored cars are sketchy at best, but according to photos, the Home Guard made plenty of improvisations ranging from a Humber Saloon car being armored up, all the way up to taking Mark IV #2324 male tank out of a local museum for active service! One of the most interesting examples is the “Malcolm Campbell Cars“. The famous land and water-speed record holder, Malcolm Campbell, was the commander of the 56th London Division Home Guard unit, and built a prototype of a Dodge armored car. Seventy were built in by Briggs Motor Bodies of Dagenham by August, 1940. Some even featured weapons taken from crashed German aircraft, in order to increase firepower. These vehicles should not be confused with the French improvised “Automitrailleuse Dodge” trucks.
The similar “Bison” was a series of lorries which were converted into ‘mobile pillboxes’ for use by the RAF to protect airfields, as well as use by the Home Guard. The concept came from Charles Bernard Matthews, who was the director of Concrete Limited in Leeds, and previously in the Royal Engineers in WWI. After presenting some prototypes to military officials, and having made some changes, several types of this truck (based on any available trucks) were produced using concrete armor, due to a steel shortage. Somewhere between 200-300 trucks were made. Whilst hardly effective protection against heavy weapons, they would defend nicely against German paratroopers. One semi-replica remains in Bovington Tank Museum today.
However, by 1942, as weapons became available to the Home Guard, these improvised weapons and vehicles were almost certainly replaced with things such as the Standard Beaverette. Apart from which, the threat of a German invasion had substantially diminished by this time.
Sources:
Dad’s Army, Season 3, Episode 1: “The Armoured Might of Lance-Corporal Jones“, first broadcast 1th September, 1969, BBC.
“History Revealed, Issue 26, February 2016“, a magazine publication
“Arming the British Home Guard, 1940-1944” by D.M. Clarke, Cranfield University
Dailymail.co.uk (Information on the auction)
bonhams.com (Online auction listing)
bbc.co.uk (1st story) (Information on the vehicle after auction)
bbc.co.uk (2nd story) (Information on the vehicle after auction)
classiccarsforsale.co.uk (Information on the vehicle after auction)
Dad’s Army on Wikipedia
Jones’ Van on Wikipedia
Bison Concrete Armoured Lorries on Wikipedia
ifelic.co.uk (Home Guard Mark IV tank) Note: Not necessarily reliable
militaryhistorynow.com (Improvised weapons of the Home Guard)
war44.com forums (More Home Guard vehicles)
ww2incolor.com (More Home Guard vehicles)
ww2photo.se (More Home Guard vehicles)
*date based on a later episode which announces the sinking of the Bismarck 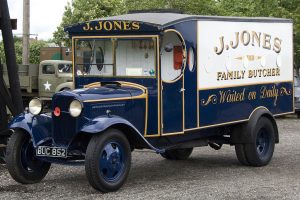 Jones’ van as it stands today. 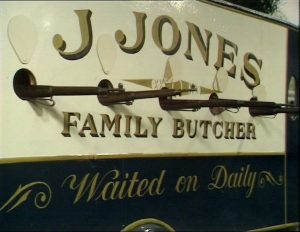 The Walmington-on-Sea APC during presentation to the Platoon. There was a total of fifteen pistol ports. 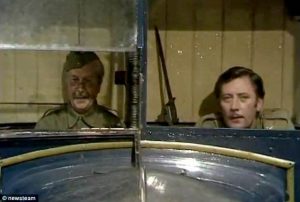 View of the cab interior after conversion to a gas-system. The gas-feed pipe can be seen. Photo taken moments before the bayonet caused a gas leak. Left: Lance Corporal Jones. Right: Private Walker. 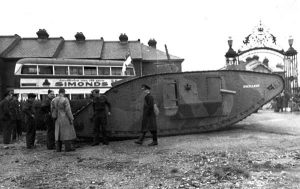 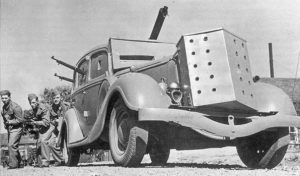 An improvised armored car based on a Humber Saloon in service with the Home Guard. It had space for six passengers, and windows were replaced with metal sheeting with slits as firing ports.

Type 3 “Bison” armored car. It used concrete for armor due to the steel shortage. Another improvised armored car of the Home Guard, London, 1940. Believed to be based on a Rolls Royce. Many other unnamed one-off improvisations exist.