The origins to the 37mm Bofors come from 1921 when the Bofors company put together a prototype anti-tank gun for trails. By using Krupp designs, they worked upon producing an Anti-Tank gun in several calibers (37mm, 47mm, 75mm), however, they didn’t get much interest and the project was shelved.
In 1931 the Royal Swedish Arms Commission then issued a directive for a 37mm anti-tank gun that could deliver a 700g projectile at 800 m/s. Bofors experimented with the design and concluded that the gun would have to weigh 800kg to be effective enough. This was soon negated when Harald Jentzen, Swedish Arms Chief of Ordnance, and his team came up with a new perforated muzzle brake. Bofors applied the brake to the gun and managed to produce a prototype in 1932 weighing only 370kg.


The initial trials were promising, the gun could penetrate 20mm of RHA at 1000 meters at 30 degrees. It could also be broken down into 11 separate pieces allowing for transportation by pack mules, sledges or even the gun crew themselves. The barrel was the heaviest piece at 43kg with the other pieces typically being 30kg. The only drawback the trials revealed was the slow rate of fire but this was soon solved by adding a special tensioning rack to the actuator spring and thereby allow the gun to become semi-automatic (i.e. the breach opened and ejected the shell casing after firing).
The final design was a monobloc barrel on a split tail carriage with metal framed rubber wheels mounted on suspension to allow towing by vehicles and protected by a 5mm thick shield with a lower folding plate. The required time for the gun to be brought into action was no more than 30 seconds. The product was put into development in 1934.
Like its British cousin, the QF 2 Pounder AT gun, it was also employed as the main tank gun in various designs like the Finnish Vickers 6 ton, the Polish 7TP and Swedish Stridsvagn L-60. 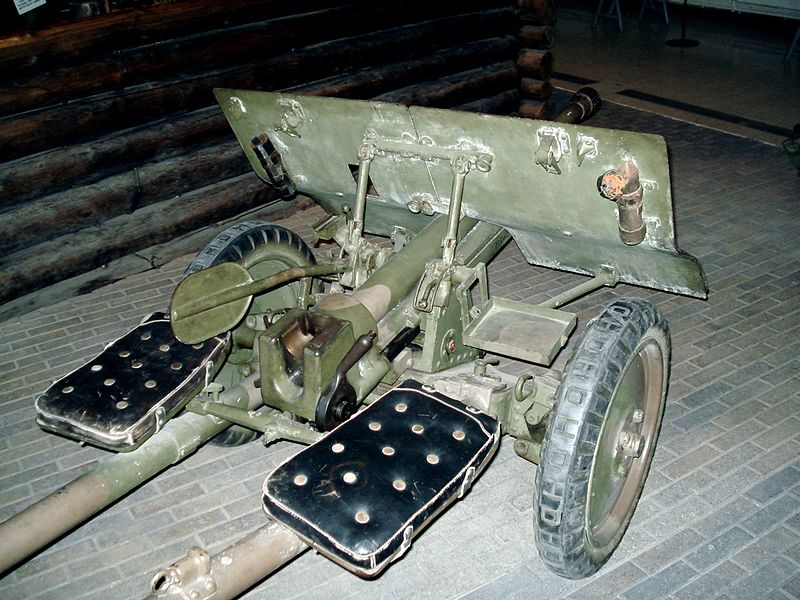 The first Bofors to be brought into service was in the Netherlands, which bought 12 in 1935 and soon after many other countries in Europe bought it and the license, including Poland, Finland, Britain, and Denmark.
The Netherlands took the first 12 and then ordered another 24 and put them all on their armored cars. The Swedish produced Landsverk L180s and L181s and the home produced M39 Pantserwagen. A handful of M39s were deployed against the German invasion in 1940 and engaged in skirmishes with the invaders. They were later used by the Germans in France and on the Leningrad Front.
Spanish Republicans seem to have bought between 20-30 Bofors during the Civil War to help boost their anti-tank capability. This was the first combat action of the Bofors and it acquitted itself very well against the mixed Nationalist armored forces of Panzer Is, T-26s and CV.33s.
Poland bought 300 guns, designated wz.36, from Sweden from 1936 to 1939. They also acquired the license to build the gun in Poland, of which over a 1,000 were built by the SMPzA (Stowarzyszenie Mechaników Polskich z Ameryki) company. When the Germans invaded in September 1939, the Poles had more than 1,200 guns on their lists. They were used to great effect against the invading German panzers, especially at the Battle of Mokra, where the gun accounted for dozens of German tanks and thus helped secure a Polish victory.
SMPzA also produced a turreted model, designated wz.37, which was placed on the 7TP JW and the 9TP and 10TP prototypes. The 7TP JW equipped the 1st and 2nd Light Tank Battalions and were mobilized at the outbreak of war. These units were used as a mobile reserve, helping to bolster the defenses of the Polish units and covering the withdrawal to other positions. They did perform well against their German counterparts but were not in any number to influence the outcome of the war. During the Piotrków assault, the 2nd Light Tank Battalion claimed several German tanks for only the loss of two of theirs but overall the assault failed and the tanks were pulled back. Most of the tanks were either destroyed or scuttled by the time of the Warsaw Defence and the remaining 22 tanks (out of original 108) were formed into two companies and used as a shoring up and counter attacking unit. By the end of the war, only around 40 remained.
Finland was the country that cemented the reputation of the Bofors guns. After trials, the Bofors was accepted as the new standard anti-tank gun of the Finnish military in October 1938. The license was bought and two factories were set up with an initial order of 156 guns. Fifty more were ordered from Sweden between 1938 and 1939. However, because of problems with setting up the factories and delivering, Finland only had 98 guns when the Soviet Union invaded in November 1939 (this was very far from the number originally envisioned of 2 guns per battalion). Finland acquired another 124 (some coming from Sweden, the rest being produced in Finland) during the course of the conflict but lost 60 in the war. However, the gun performed very well against the Soviet tanks, especially the lighter armored T-26s and BTs. When Finland joined Germany in the invasion of the Soviet Union in 1941 (called the ‘Continuation War’ in Finland) the Bofors was starting to struggle against the newer Soviet tanks and was soon being replaced by more powerful guns. Finland kept them in service though as infantry support guns until 1986 thanks to its portability, high rate of fire and good high explosive round.
Denmark adopted the Bofors in 1937 and acquired the license to produce their own version; the 37mm Fodfolkskanon m1937. One was deployed against the German invasion in April 1940 where it performed bravely, disabling 3 tanks before its crew was incapacitated.
Romania bought 556 former Polish guns from their new German Allies at the end of 1940. Most of these saw service with Romanian units during Operation Barbarossa where they were soon relegated to infantry support guns in the face of superior Soviet Armour like the T-34 and KV-1. Most were lost during the Romanian retreat in 1943.
Sweden didn’t adopt the gun until 1937, as the 37 mm Infanterikanon m/34 and the 37 mm Pansarvärnskanon m/38, as their main anti-tank weapon and equipped every infantry battalion with a 2 gun anti-tank platoon. They also donated and sold over 100 guns to Finland during the Winter War (7 guns were brought by the Svenska frivilligkåren, Swedish Volunteer Corps when they arrived in early 1940). They also acquired 13 Finnish made Bofors in late 1940, which they designated 37 mm pansarvärnskanon m/38 F. They also employed it as a tank gun, 37 mm Kanon m/38 Stridsvagn, which became the standard armament for the Stridsvagn L-60S\III and S\V light tanks and the Stridsvagn m/41.
The United Kingdom also used the Bofors thanks to an acquisition by the Anglo-Egyptian Sudan Government from Sweden. After Dunkirk, the British were lacking their main anti-tank gun, the 2 Pounder, and the British mainland stripped many from their operational units abroad (including those in the Western Desert). To make up for this shortfall, the Anglo-Egyptian Sudan Government offered up their Bofors to the Desert Forces, where they became Ordnance Q.F. 37 mm Mk 1, and were mainly employed by 3rd and 106th Royal Horse Artillery Regiments. They were mainly deployed ’portee’ by British trucks and were very effective throughout the Desert campaign.
The Soviet Union also utilized captured versions of the Bofors, thanks to their invasion of Poland. Most of them were taken into depots in the rear of the Soviet lines only to be ’dusted’ off and brought into frontline use due to the heavy losses in the early stages of Operation Barbarossa.

Illustration of the Bofors 37 mm by David Bocquelet 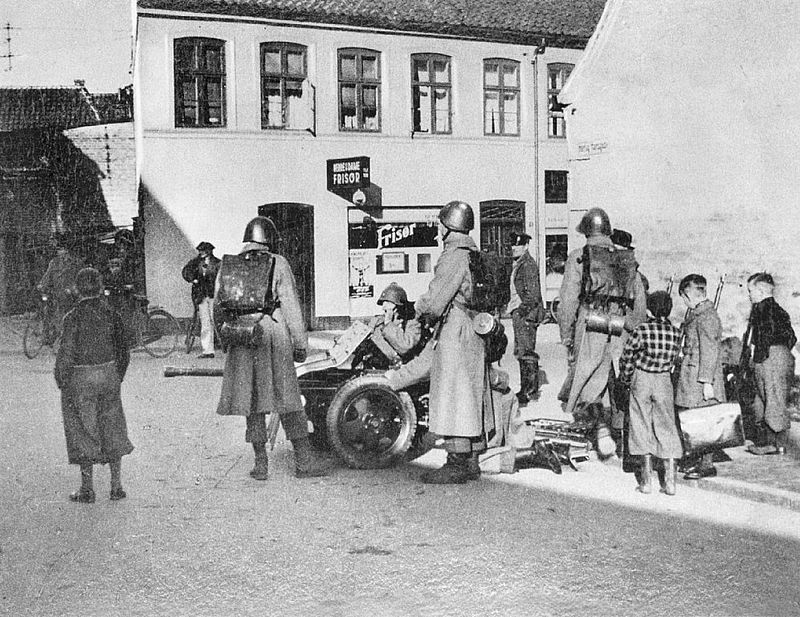 The sole Danish Bofors that saw action during the Invasion of Denmark, 9th of April 1940, two of the crew were later killed. 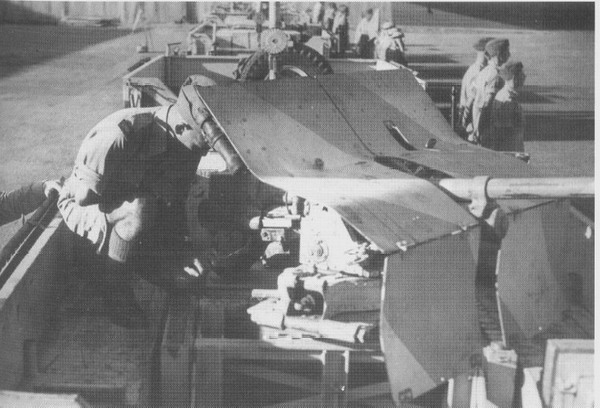 When the 37mm Bofors first graced the world scene in the mid-30s, it was one of the best anti-tank guns in existence. It could penetrate the armor of almost any tank currently in service. It was also designed for motorization, which allowed it to be better utilized by motorized units rather than some of its contemporaries. However, it could still be towed by horse (the Finnish often employed a one-horse limber for their guns) and in dire circumstances, it could be pulled/pushed by pure manpower. The unofficial longest range record for taking out a tank with this gun occurred during the Battle of Taipale in 1940 when the 7th AT-detachment destroyed a T-37A that was crossing over the ice of Lake Ladoga at a range of 1,700 meters.
It was well loved by those who used it, thanks to its high rate of fire and good ammunition. Even once it had become obsolete as an anti-tank gun in late 1941/early 1942, it still performed very well as an Infantry support gun being used to great effect against defensive positions and infantry formations. 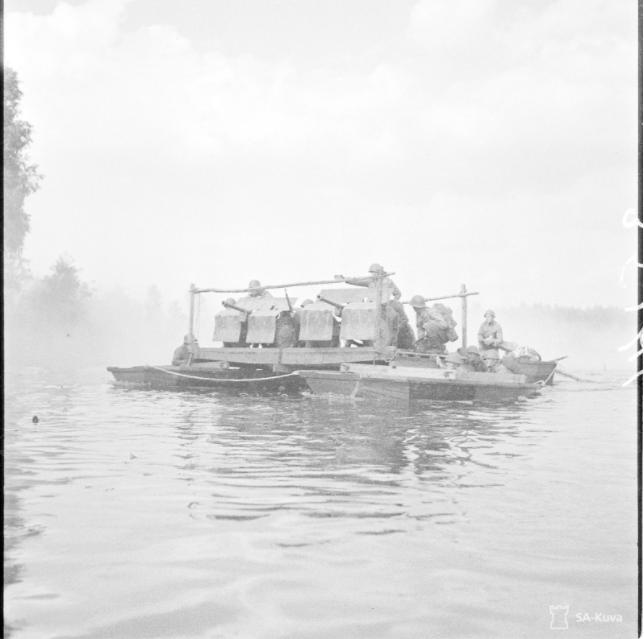 “When Finland joined Germany in the invasion of the Soviet Union in 1941 (called the ‘Continuation War’ in Finland)”. Finland has not want to join Germany. Finland was atacked by USSR 25.06.1941.

Yes it waited until the Soviets attacked but Finland was definitely deployed in an offensive posture and had plans with Germany since May 1941. So yes, they did join Germany in the invasion of the USSR.

Its still incorrect. U didnt include the S-I and II. These where not equipped with 20 mm guns like the L-60 article suggests.

I read that Siam (Thailand) bought 37mm guns from Bofors. Is that true?

We can discuss on this topic via DM, my friend

Good morning. Would you happen to have a technical manual for the 37mm bofors; specifically for disassembly of the recoil cylinder mechanism?