A table with comparative statistics is provided at the bottom of the article.

Mythbusting: The SU-152 and ISU-152 were “Beast Killers”
Soviet wartime propaganda suggested that the SU-152 and ISU-152 (SU being based on the KV chassis, ISU being based on the IS chassis) were “Beast-Killers” because they could destroy Panthers, Tigers, and Elefants. The ISU-152’s 152mm ML-20S howitzer was, indeed, capable of destroying heavy German armor, but this required a direct hit with a High Explosive (HE) shell. Such a direct hit could do one of three things to disable the tank: destroy the vehicle’s drive systems, kill its crew, or blow the turret / casemate / hull open (or even clean off, in the case of turrets). Armor Piercing (AP) and Concrete Piercing shells were developed, but these were expensive and complicated to make, hardly more effective than HE rounds, and thus were scarcely supplied – even at Kursk! However, the ISU-152 was not a dedicated tank destroyer – it was an assault gun designed for bunker busting and indirect fire. Needless to say, using an assault gun as a tank destroyer was risky business.
Firstly, the gun would need to be fired at short ranges against enemy tanks. This is because the ML-20S was a fairly low velocity howitzer, which would simply not be accurate enough to engage tanks from distances. Consider also that the vehicle had a maximum of 90 mm of armor, which meant that it whilst it was adequately protected from some German guns at long ranges, it simply was not thick enough to protect the vehicle in the short ranges it would need to operate in as a tank destroyer. For example, the 7.5 cm KwK 40 L/48, as mounted on StuGs, Panzer IVs, and Jagdpanzers, could penetrate 97 mm of armor at 500 m, and 87 mm of armor at 1000 m, at 30 degrees (the ISU-152 casemate was barely sloped at all). Also consider that the vehicle was simply not mobile enough to be engaging more nimble German tanks, and could probably be outmaneuvered anyway.
Yet another major issue of using the ISU-152 as a tank destroyer was that it could only manage 1-3 rounds per minute (depending if it had one or two loaders, and how experienced they were). This meant that in any type of ‘duel’, the ISU-152 would not only need to fire first, but also guarantee a hit, or practically any opposing German tank could get numerous shots off against it – as mentioned early, likely knock-out blows. Having said this, it did not seem to be a consideration taken into account when making the “BM” projects, as the guns all had equally as poor rates of fire.
In conclusion, the ISU-152 did not live up to its legendary name. Other Soviet field guns and tank destroyers had somewhat better results compared to the ISU-152, although the results were still not quite satisfactory.
Mythbusting: The 122 mm A-19S and D-25T / S were sufficient
It is a commonly held belief that the 122 mm D-25T / S and A-19S were sufficient at destroying the heaviest German armor. This belief is somewhat problematic, given the weight of the evidence.
According to a Wa Preuf 1 (a Wehrmacht weapons research facility) report from October 5th, 1944, the 122mm A-19 (the A-19S being used on the ISU-122, the latest Soviet SPG at that time) could not penetrate the upper glacis of a Panther. However, it could penetrate the lower glacis from a distance of up to 100 m, the mantlet from 500 m, and the side of the turret from 1500m. This was still somewhat wanting, as the Red Army would prefer to engage such tanks from longer ranges, to prevent heavy losses of their own tanks.
The improved 122mm D-25T (which was used on the IS-2, the D-25S was essentially the same, and was used on the ISU-122S) seems to have fared much better against German armor. Testing of the gun on the IS-2 platform in Kubinka in 1944 suggests that a King Tiger’s turret (likely the side) could be penetrated from up to 1000-1500m. The welds of front hull seams could also be penetrated from 500-600m. Whilst these penetration statistics might make the D-25T sound more promising, they must be taken with some caveats.
Firstly, to score such hits would require a very skilled and very experienced gunner – especially to score a hit on the turret from a range of up to 1500m. Secondly, similar to the ML-20S, the D-25T could only manage up to 3 rounds per minute. Thirdly, the validity of these statistics has been called into question, because they come from Soviet sources. In the past, these statistics were often exaggerated for propaganda purposes. Finally, the very fact that the ISU “BM” projects were put into production suggests that the Soviets knew that the D-25T would not give consistently reliable results in AT duties.
Whilst, indeed, the D-25T was, in theory, capable of destroying the heaviest German armor, it was perhaps not as reliable as it needed to be in the field. Of course, it is true that penetrations were not required to disable the tank or kill the crew (both in the case of the ML-20S and D-25T), but one could not simply rely on non-penetrating hits to, in some manner, disable the tank.
As a result of these relatively unsatisfactory Soviet AT capabilities against the Wehrmacht’s heaviest tanks, in June 1944, Zavod Nr. 100 began developing new, high velocity 122 mm, 130 mm, and 152 mm guns to be mounted on the ISU (and perhaps IS and KV) chassis. 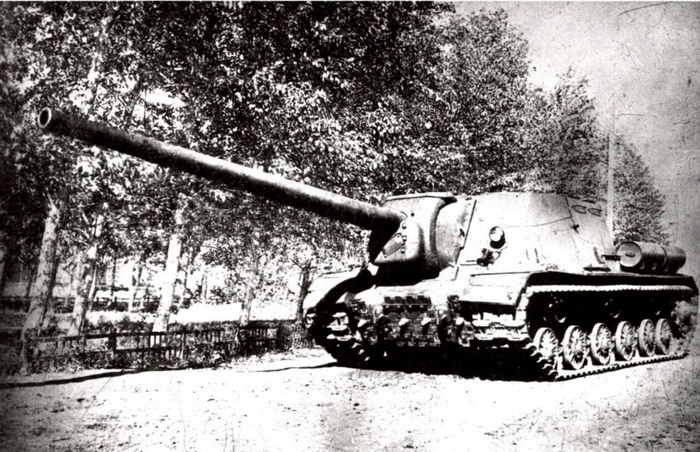 Object 243 (ISU-122-1) with the 122 mm BL-9. This vehicle is distinguishable as its gun has no muzzle brake, and looks like an elongated A-19S. However, the gun replicator has been angled (see the rectangular plate on the mantlet below the gun), unlike a regular ISU-122. 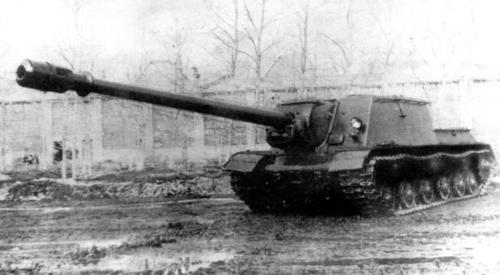 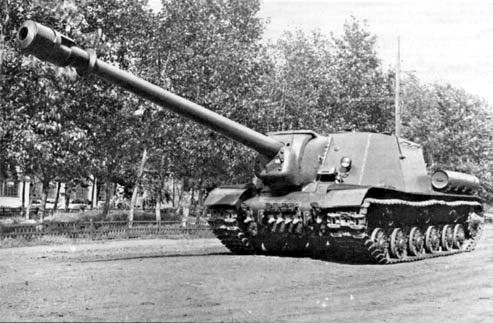 Object 247 (ISU-152-2) with the 152 mm BL-10. This vehicle is distinguishable by the length of its barrel (it was slightly shorter compared to the BL-8), its muzzle brake, and its altered gun replicator. 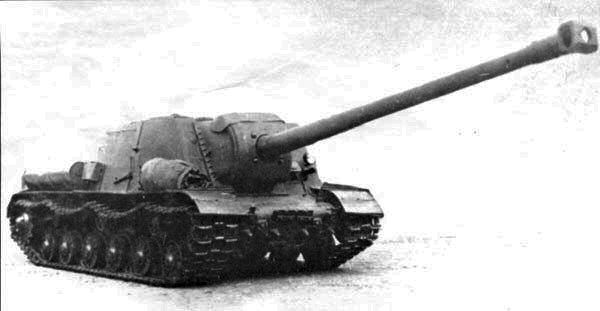 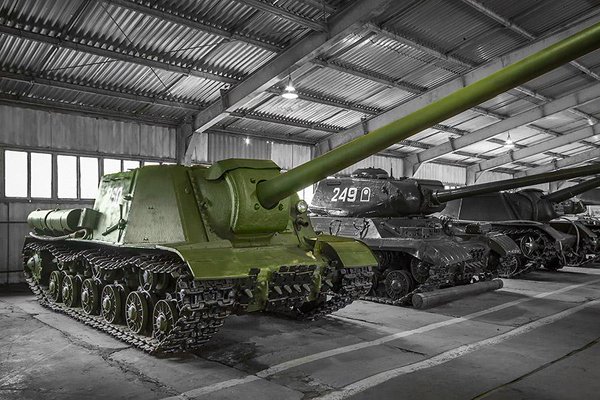 The ISU-130 preserved at Kubinka.

Object 251 (ISU-122-3) with the 122 mm S-26-1. This vehicle is distinguishable by its round gun mantlet and its unique cylindrical muzzle brake.

The “ISU High Powered Gun Projects” were, in many respects, a failure. True, the guns were incredibly potent, particularly in the case of the S-26-1, which could penetrate 204 mm from 1000 m. They also had a very long range, only limited by the elevation of the ISU mantlet. However, they were simply not practical and mechanically reliable enough for their intended purpose, which was to knock out the thickest armored Wehrmacht tanks consistently, and from long ranges.
Even if the vehicles were put into serial production, how often these tanks would face off with the most heavily armored vehicles of the Wehrmacht is questionable. With Jagdtigers, King Tigers, and Ferdinands being so rare, the war was more likely to have ended before the ISU High Powered Projects saw combat with the vehicles they were designed to destroy. What had ultimately put the nail in the coffin for these guns was that the war had ended, and they were no longer necessary.

Sidenote: Designations and identification through photos

In the writing of this article, it has been exceptionally difficult to pin down which photos correspond to which project. Indeed, some sources only mention four (in some cases, only three) High Powered Gun Project vehicles. It has been the author’s conclusion that there were five such High Powered Gun Projects mounted onto ISU chassis, as outlined in Solyankin’s book “Советские тяжелые самоходные артиллерийские установки 1941-45″. Most online sources, particularly non-Russian language sources, are incredibly inaccurate. Gun statistics were mostly provided by a Soviet data set as provided by Tankarchives.blogspot. However, these statistics sometimes differ with Solyankin.

1 – Note 1 – Most data has been obtained from this Soviet data set. However, certain statistics have not been given and have been obtained from alternative (potentially dubious) sources. Where necessary, statistics provided by Solyankin have been used, but these are questionable.
2 – Note 2 – Experienced crews were able to load much faster. Consider that the BM guns were likely tested by experts in test ground conditions, thus likely making their rounds per minute data higher than would be in the field, by more typical tank crews.
3 – Note 3 – Obtaining the ISU-122S’ ammo capacity has been difficult. It is reported that with a crew of four, instead of five (IE, one loader instead of two), then ammo capacity was increased, but the only given figure is 30, presumably with two loaders.
Sources:
“Germany’s Panther Tank: The Quest for Combat Supremacy”, by Thomas Jentz
“Sturmgeschutz & Its Variants”, by Walter J. Spielberger
“Советские тяжелые самоходные артиллерийские установки 1941-45”, by A.G. Solyankin
battlefield.ru
battlefield.ru (second page)
forum.axishistory.com
tankarchives.blogspot
tankarchives.blogspot (second page)
tankarchives.blogspot (third page)
armchairgeneral.com forums
WW2 AT Penetrations.pdf
alternatewars.com
alternatewars.com (second page)
ftr.wot-news.com
3.bp.blogspot

May I ask where the Jagdtiger fits into this data? I don’t see any information on this in the article, and it is in the table.

Hello, John,
I included it for reference and context, so that readers might have something to compare these guns to. I was strongly considering including other guns, but there was little space, so I figured it might be best to take one of the most powerful German guns.

Thanks! Currently our illustrator is on break, when he returns illustrations will be back to normal.
– TE Moderator

I’m Back. As you’ll can see on the post update

Nice to see you again

The USSR would use several SU/ISU152 when tank hunting and have them fire on the same target. That is how you get a first strike kill.
Secondly all internal soviet specs and reports are very good there is no propaganda int hem. Seems like who ever wrote that has fully bought into post ww2 cold war rewrites
However when it comes to Germany THEY did indeed often lie to themselves in internal reports so often that the German High Command had it written that all claims of kills should be decreased by 50% out of hand.
“I must say, that the increase in dead and wounded was greatly inconvenient for German officials, filtering information from the front, and attempting to present it in the best possible light. As one of them admitted to me later, they worked on the principle of “Let us lose the war in reality, but we must win it on paper.”” – Hendrick C. Verton, In the Fire of the Eastern Front, The Experiences of a Dutch Waffen-SS Volunteer, 1941-1945