With the fall of France in May 1940, the German Army captured a lot of French Army tanks and vehicles. They called them Beutepanzer (trophy tanks). The approximate numbers of French AFVs captured by the German Wehrmacht are as follows: 300x Panhard-178; 3,000 Renault-UE; 350 to 360x Lorraine 37L and 38L; 1700x Renault FT Tanks (various versions); 843x Renault R35; 550 to 600x Hotchkiss H-35 and H-39; 50x FCM-36 tanks; 297x SOMUA S-35 tanks and 161x Char B1 bis tanks. More than 5,000 captured French army armoured fighting vehicles were repaired or converted in French factories. Vehicle manuals were translated into German and the vehicle spare part production initiated.
One such Beutepanzer trophy tank was the very large Char B1 bis heavy tank. Many of them had been abandoned by their crews after running out of ammunition or fuel. The French Army supply system was poorly organized in 1940. Very few of these monster tanks were knocked out by enemy action. 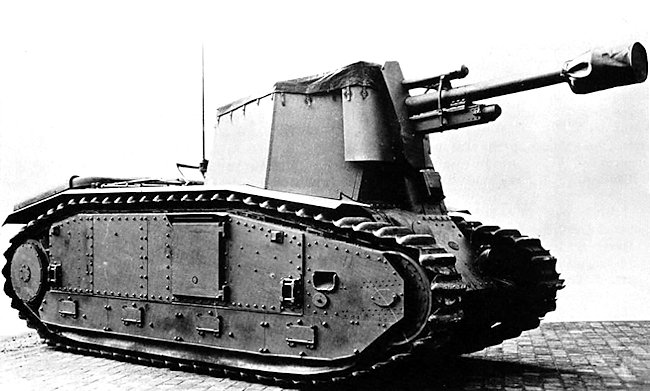 Factory fresh 10.5cm le.F.H.18/3 (Sf) auf Geschuetzwagen B2(f), having just been driven out of the workshop doors.
They were given the German designation Panzerkampfwagen B2 740(f) shortened to Pz.Kpfw. B2 740(f). The letter ‘f’ signified that it was a French built tank. Hitler issued a directive in March 1941 that sixteen of these tanks were to be converted to self-propelled artillery guns and used to support the Flammenwerfer auf Pz.Kpfw.B2(f) flamethrower tanks as they assaulted Soviet positions on the Eastern front.
It took longer than initially planned to convert the Char B1 tanks to self-propelled artillery guns. Lack of equipment, vehicles, guns and parts were blamed. The Flammenwerfer auf Pz.Kpfw.B2(f) flamethrower tanks went into action without supporting artillery SPGs in June 1941.
The Panzer-Abteilung (Flamm).103 was disbanded by mid-July 1941. The B2 Flammenwerfer tanks were a disappointment to the Germans. They kept on breaking down with mechanical problems. They were not reliable and could not be depended upon to get to an enemy strong point and neutralize it.

Most of the 10.5cm leFH 18/3 (Sf) auf Geschützwagen B2(f) artillery self-propelled artillery guns were painted ‘Panzergrey’ at the factory but a few were repainted in the standard late war paint scheme of sandy yellow ‘Dunkelgelb’ with brown and yellow mix. 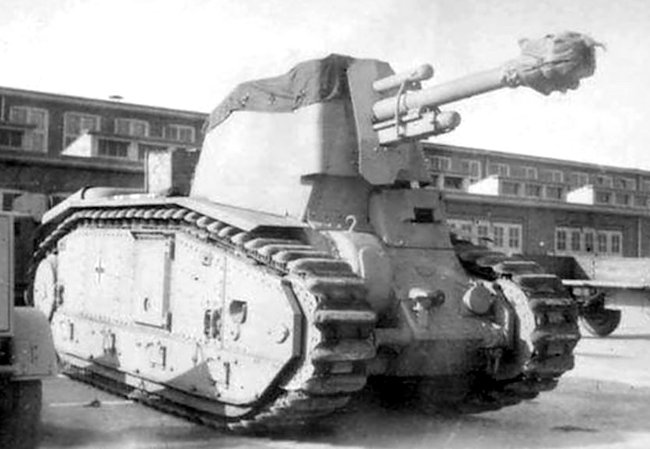 10.5cm le.F.H.18/3 (Sf.) auf G.W.B2 in the Rheinmetall-Borsig factory with bad weather tarpaulin on the top painted in ‘Dunkelgelb’ sandy yellow not ‘Panzergrey’.
The following photograph ends the discussion as to what colour the 10.5cm leFH 18/3 (Sf) auf Geschützwagen B2(f) artillery self-propelled artillery guns were painted. The first vehicle is painted in the sandy yellow ‘Dunkelgelb’ and the one following it is painted in the earlier ‘Panzergrey’. 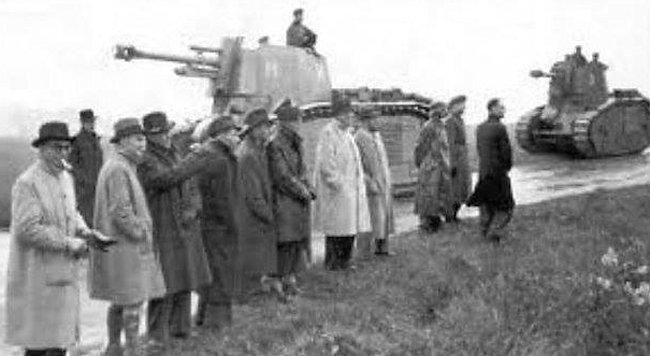 The design contract was given to Rheinmetall-Borsig, which was based in Dusseldorf. They created blueprints for a mount placed on top of the tank chassis that could take the 10.5 cm leFH 18/3 artillery howitzer. The gun crew would be protected from small arms fire by an open top armored casement. Its armor plate thickness ranged between 30–40 mm (1.18-1.57 in) thick at the front and 20–30 mm (0.79-1.18 in) at the sides. Tarpaulins would cover the open top to give the crew shelter from bad and hot weather.
It had a five-man crew: commander, driver and three gunners. The Char B1 main gun in the hull had been removed. It was not replaced with a hull mounted machine-gun. For self-defence, a 7.92 mm (0.31 in) MG 34 machine gun was available to be fitted to the top of the gun casement. The crew also had access to handheld 9 mm (0.35 in) machine pistols.
The Char B2 tanks already had a very high profile. With the mounting of the 10.5cm leFH 18/3 howitzer on the top, it was very tall. Its height was 3 m (9ft 11in). This made it easy for the enemy to spot, so it had to be deployed behind the initial front line of tanks.
The French army radios were replaced. Some could only send messages by Morse code. Modern German Fug.5 radios, that could provide voice communication, were fitted in the machines. The removal of the hull mounted 75 mm (2.95 in) gun increased the amount of room there was available for the storing of extra equipment and ammunition.

Five were produced by January 1942, five in the following February and six in March. The sixteen 10.5cm le.F.H.18/3 (Sf) auf G.W. B2(f) were issued to Artillerie-Regiment 93, 1.Abteilung (1st Battalion) of the 26.Panzer-Division which was in France. The 1st Battalion had three batteries with four self-propelled artillery guns in each battery. The four remaining vehicles were issued to the HQ battery on reserve. Reports stated that the vehicle was prone to frequent mechanical breakdowns.
An Artillerie-Regiment 93’s combat strength report dated 31st May 1943 reported that they had fifteen 10.5cm le.F.H.18/3 (Sf) auf G.W. B2(f) SPGs of which 14 were in an operational condition. This report also recorded that twelve Wespe 10.5cm SPGs had been issued to the 1.Abt./Artl.Rgt.93 as replacement vehicles for the mechanically unreliable 10.5cm le.F.H.18/3 (Sf) auf Geschuetzwagen B2(f) SPGs. These were then used as training vehicles to teach new tank drivers, gunners and mechanics their trade skills. The 26.Panzer-Division was sent to Italy in July 1943.
Orders had been issued to send these vehicles to Sardinia to be part of the strength of the 90.Panzergrenadier-Division. No records have been found to confirm that the fifteen remaining vehicles were transferred to Sardinia or what their ultimate fate was. The 90.Panzergrenadier-Division withdrew to Corsica from Sardinia and was then sent to northern Italy. It fought at Anzio, Rome, the Caesar and Gothic Lines and the Po River. It was destroyed near Bologna, Italy, April 1945.

The 10.5 cm leFH 18 gun was a German light howitzer used in World War II. The abbreviation leFH stands for the German words ‘leichte FeldHaubitze’ which, translated, means light field howitzer. It was fitted with a ‘Mundungbremse’ muzzle brake to allow longer range charges to be fired and reduce the amount of recoil on the gun. This increased the operational life of the gun barrel.
The 105 mm (4.13 in) high explosive HE shell weighed 14.81 kg (32.7lb). The armor piercing shell weighed 14.25 kg (31.4 lb). It had a muzzle velocity of 470 m/s (1,542 ft/s) and a maximum firing range of 10,675 m (11,675 yds). With a good gun crew, it had a rate of fire between 4-6 rounds per minute.
The high explosive shell was in two pieces. It was a ‘separate loading’ or two-part round. First, the high explosive HE projectile would be loaded and then the cartridge propellant case. Depending on the range of the target different sized bags of propellant were inserted into the cartridge. More bags were used for longer range targets.
The 10.5cm leichte Feld Haubitze 18 gun was not very useful in the direct-fire mode against enemy armored vehicles. It could only penetrate 52 mm (2 in) of armor plate at a very short range of 500 meters (550 yd).
A HEAT-round for the 10.5cm leFH 18 was developed in June 1940. It went into service in a large number in winter 1941/42, probably as a reaction to the T-34s and KV-series tanks appearing on the Eastern Front. There were 3 different types of HEAT-rounds, the GR H1/A, GR H1/B and GR H1/C. The GR H1/A was the first one developed in June 1940, followed by the GR H1/B sometimes in 1941 and the final GR H1/C in 1942. 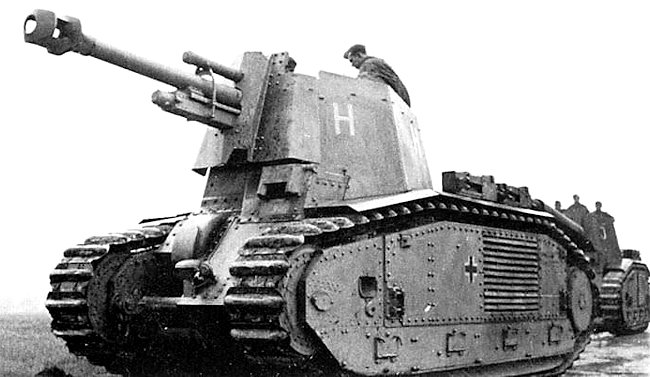 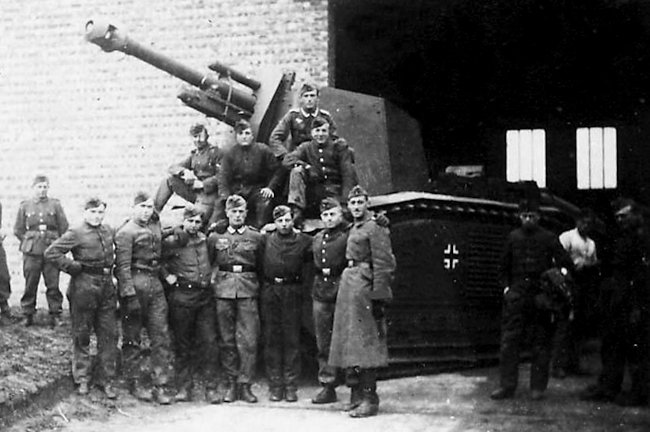 The fighting compartment that surrounded the gun of 10.5cm le.F.H.18/3 (Sf) auf Geschuetzwagen B2(f) N had an open top. In bad or very hot weather, a tarpaulin covered the top. 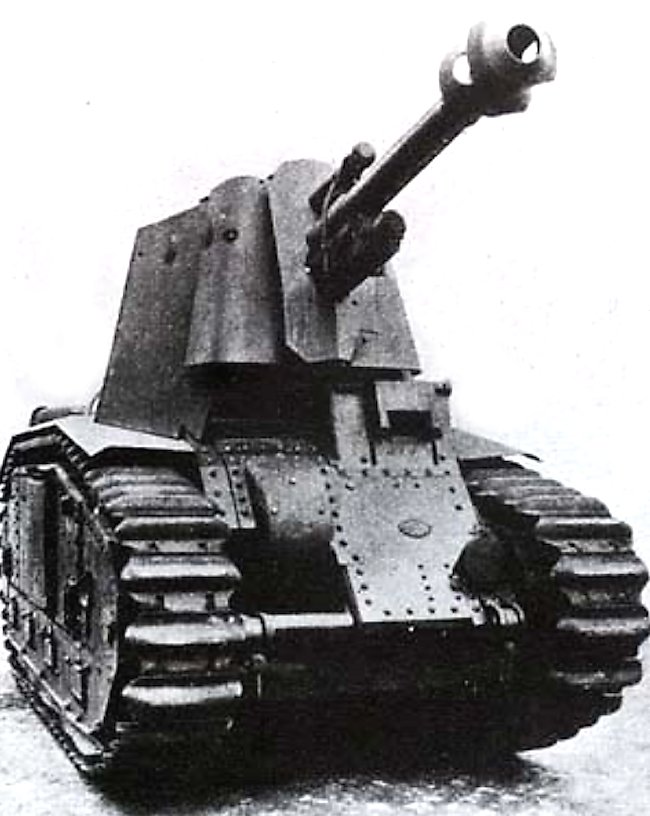 The 75 mm (2.95 in) gun was removed from the Char B1 hull when the tank was converted into an artillery self-propelled gun. the drawing looks like 75mm tank gun to me

whyyy? like why would they do this? they knew that these things were hard to punch thru so why not use them?

the side armour (as far as i know) has always stayed at 55mm.

there was different B1’s in use so they probably account for both.

So the large wooden boxes were used for crew stowage or ammunition?