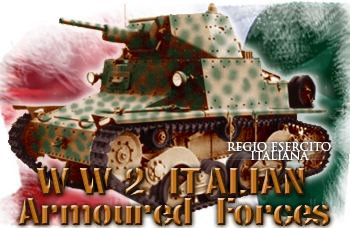 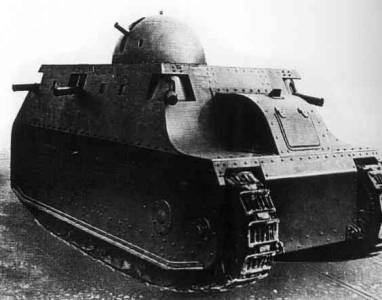 Like other nations involved, Italian tank development dates back from WW1. They observed Allied efforts in 1916, and the first successes in the field. However, the Italian view on armored warfare was limited in scope, mostly because of the landscape where most divisions fought. The Austro-Hungarian border was mostly an Alpine battleground, which prevented any efficient use of tanks. However, in some areas, like Northern Dalmatia, tanks were ideally suited. The general staff ordered a single French Schneider CA-1 in 1916, for extensive trials. But the design was ultimately rejected. A similar indigenous model was started the same year when FIAT, by then the industrial giant of Italy, proposed a new design, the FIAT 2000. It was ordered after the plans were drawn up, and the construction of two prototypes soon began. It was a 40 ton boxy model, which bore some superficial resemblance to the German Sturmpanzerwagen A7V. It never entered production, as the war came to an end. It had innovative features, like a completely separated engine compartment, with the crew being posted above. One of these two machines was operationally tested in Libya, and the other displayed in several propaganda shows. From 1927 to the Ethiopian invasion

By 1918, FIAT and Ansaldo were the only industrial complexes large enough to deal with tank production. The first model produced for the Royal Army (Regio Esercito) was a local derivative of the French Renault FT, called FIAT 3000. These vehicles were ready in 1922, and served well to forge Italian interwar armored tactics. A variant developed in 1930, armed with the Vickers-Termi 37 mm (1.46 in) gun, named FIAT 3000B. Both formed the bulk of the Italian army corp, until new models arrived in 1935. From there on, official designations incorporated “Carro Armato or “CA”, meaning “armored carriage” and an abbreviation composed of the army model designation( L for “Leggera”, M for “Medio”, P for “Pesante”), the weight and the year of first production.

The FIAT 3000B (later L5/30) was an important step towards full-scale tank production. But only 153 were built in all, and they never achieved all the expectations placed on them. Despite this, some were exported, including to Eritrea, and others fought during the second Italian-Ethiopian war of 1935. They also soldiered in East Africa, in the Balkans and Greece, and still operated in 1943, when the Allies landed in Sicily, at Gela.

Italian tank development during the thirties

In 1928, an Italian army commission attended the first public demonstrations of the British fast one-man tankette designed by Major Giffard LeQuesne, which later became the first Carden-Loyd tankette design. The Mk.VI, distributed by Vickers, was an instant success, sold and produced under licence abroad. It was fast, versatile, and cheap. The tankette fad lasted well until 1936. Ansaldo and FIAT earned contracts for the first Italian design, the CV-33 (“Carro Veloce”). It was followed by the CV-35, and the CV-38. These were the most produced armored vehicles in Italy so far, being an export success and even cheaper than the original Vickers model. Accordingly, these light tanks saw extensive service, despite being obsolete by 1940. By June 1940, the bulk of the Regio Esercito armored forces was made of light tanks. These had several limitations, like weak protection, machine-gun armament, and no traversing turret, which all prevented any use against other tanks. This issue was first addressed with a prototype, the FIAT-Ansaldo Carro d’Assalto L/36 or 5-tons modello 36, a CV-35 light tank equipped with a new suspension and a light traversing turret, armed with a L/26 37 mm (1.46 in) and a coaxial Breda 6.5 mm (0.25 in) machine-gun. The armor was raised to 30 mm (1.18 in), speed lowered to 32 km/h (20 mph) and the range was only 80 km (50 km). A second prototype had the gun placed in the hull, and a fully traversible light machine-gun turret.

Despite some production advantages, the Army choose a new scaled-up model. The Carro Armato Leggera M6T (1938) was given a stronger chassis, more powerful SPA 8-cyl engine, a reworked suspension, and a light turret bearing twin 8 mm (0.31 in) Breda modello 38 machine-guns. It has an impressive 42 km/h (26 mph) top speed and far better range (200 km/125 mi). But despite these performances, the Army insisted for a better armed model. Thus, the L6/40 appeared in early 1940. The first prototype and a preseries were delivered by mid-1940. The L6/40 was almost identical to the previous prototype, but with a 20 mm (0.79 in) 37/26 rapid-fire antitank gun, and a coaxial Breda 8 mm (0.31 in). The preseries and series were armed with a Modelo 35 gun. The L6/40 was fast and light weighing just 6.8 tons in battle order.

After a single prototype, a series began in late 1940. Later production versions (1941) had 42 mm (1.65 in) of armor, similar to the next model, the M14/41, which was almost identical. The last evolution of the type was the M15/42, equipped with a much powerful petrol engine, the FIAT SPA 145 bhp. But all these designs were limited by a rather obsolete suspension system, dating back to the Vickers 6-ton. Starting in 1942, the Italian army tried to develop a true “cruiser tank”. This could only be achieved with a Christie style suspensions system. This led to the M16/43, better known as the Carro Celere Sahariano, which bears some resemblance to the British Crusader. It had a very low profile, long hull, and the same armament as before, probably 40 mm (1.57 in) of armor, and a powerful FIAT SPA (275 hp) engine. It was capable of a sustained speed of 71 km/h (44 mph). But it also came too late. Production was cancelled as the Axis was driven out of Tunisia.

Since the WW1 FIAT 2000, no heavy model was ever studied, mostly due to the lack of funds, industrial capabilities or different priorities. However, this changed in 1939, with some German assistance. The Carro Armato Pesante P26/40 was equipped with a powerful 420 hp FIAT V12 diesel, and had a welded hull protected with 50-60 mm (1.97-2.36 in) of hardened steel armor. The large two-man turret housed an efficient 75 mm (2.95 in) L/34 gun. which had good armor-piercing capabilities. Because of the lack of resources, the first prototype was not ready before 1942, and production really started in 1943. By November, only 70-80 had been delivered. Production was then taken over by the new German authorities, and ultimately 103 would be completed. Most served with the Wehrmacht in Italy, until the armistice.

Light tanks were developed first, like many other nations in the 1920s and 1930s. France provided the first tanks in the shape of the wartime Renault FT, which Italy copied and refined as the FIAT 3000, and later adopted the British Carden Loyd tankette. Although of limited value on the battlefield, were cost-effective and cheap to produce en masse, enough for filling reviews and for Mussolini to boast of his power to foreign journalists not keen on military matters. But, as it was learnt the hard way in Africa, these vehicles were easy prey and were only suitable for scouting and as auxiliaries. Nevertheless, they provided the precious industrial experience basis upon which the Italian medium tanks were developed.

Medium tanks (Carro Armato Medio) were first developed as scaled-up light tanks or after the example of the British Mark E. After a first small series of stopgap vehicles armed with a hull main gun (a solution also favored by France and USA), the bulk of the production was centered around a homogeneous series, the M13/40 and its successors, which were very closely related. Together, they formed a 1800-strong tank force, quite an achievement for Italy at that time, but certainly not impressive compared to the industrial muscle of Great Britain, moreover the United States. Although their protection was relatively strong, the bolted assembly denied this advantage. Firepower was adequate, with a very good 47 mm (1.85 in) gun and a tandem of machine-guns, but their diesel engines suffered from the heat in North Africa, and their old-fashioned suspensions did not favored the great speeds required in desert warfare.

Due to progressive technological advances in manufacturing, Italy started building a heavy tank in 1942 (not counting the early FIAT 2000), with German engineering help. Built in small quantities and too late, this excellent tank was mostly used by German crews after the Italian armistice. Carrro Armato Pesante P26/40 103 units – 75 mm (2.95 in) armed, good armor. Developed too late.

Under the name “Semovente”, Italian self propelled guns were inspired by the success of the German StuG III on the Eastern front. A wide variety of these tanks were derived chiefly from the standard medium tank chassis, and the light tank L6 as well. Their names (Semovente means “self propelled”) were composed of the main gun’s caliber followed by its barrel length ratio. Ex. 75/18 meant 75 mm – 18 caliber (the barrel length was 18x the bore diameter).

Although these kind of vehicles gave speed and firepower at affordable cost, Italy did not develop the concept of armored cars (AutoBlinda or AB) as much as the British Forces, especially in North Africa. The IZM and AB611 were old and heavy machines, unsuitable for reconnaissance. However, after 1940, the AB 40 series provided the bulk of Italian armored cars with an excellent model, declined into the AB 41 and AB 43. British models were found as a source of inspiration, the LRDG operations inspiring the AS 42, while the Lince was a copy of the Daimler Dingo.

Lancia-Ansaldo IZM – only a handful of these WW1-era armored cars were used in Colonial areas.
Autoblinda Fiat AB 611 – the standard late 1930 4×6 colonial armored car.
Autoblinda AB 41 – a rather successful 4×4, well-armed design, which strove in North Africa.
Camioneta AS 42 – a conversion of the AB 41 as a long range vehicle equivalent to the British LRDG patrol cars. Depending on their posting, these were the “Sahariana” or the “Metropolitana”.
Autoblinda Lince – a copy of the British Daimler Dingo, with 250 copies built in 1943-45 and used by the Italian Social Republic and German Forces. 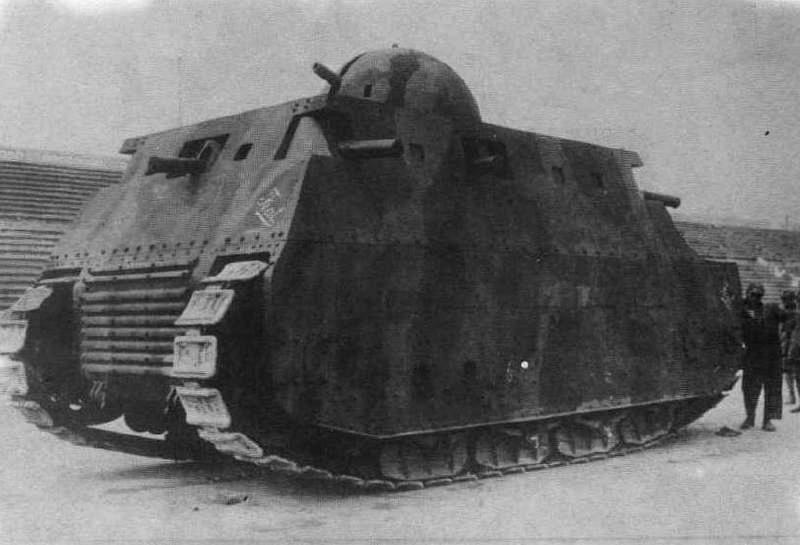 FIAT Ansaldo Carro Veloce 33
The CV 33 light tank, the best-seller and most produced armored vehicle in Italy at the time. The L6/40 was the next generation of light tanks, initially developed on the basis of the CV 35 light tank. It had a new suspension system and a 20 mm (0.79 in) gun in a traversing turret. It was the Italian equivalent of the Panzer II.

Some M11/39s captured by Australian troops after the British counter-offensive of early 1941. This medium tank was strongly influenced by 1938 British designs, like the Matilda I and Cruiser I. The Autoblindas AB 40 to 43 were the main armored car in the Regio Esercito. It was a sturdy and well-armed design, with good off-road capabilities.

The Semovente 47/32 was a derivative of the L6/40, strongly influenced by the German StuG design. It was used as a tank hunter, as well as for close infantry support. The Semovente 90/53 was the heaviest adaptation of the M14/41 chassis, and was used as artillery support as well as tank hunting.

The Carro Armato P26/40, the last WWII evolution of Italian tanks, was a good design armed with a high-velocity 75 mm (2.95 in). However, it came too late. 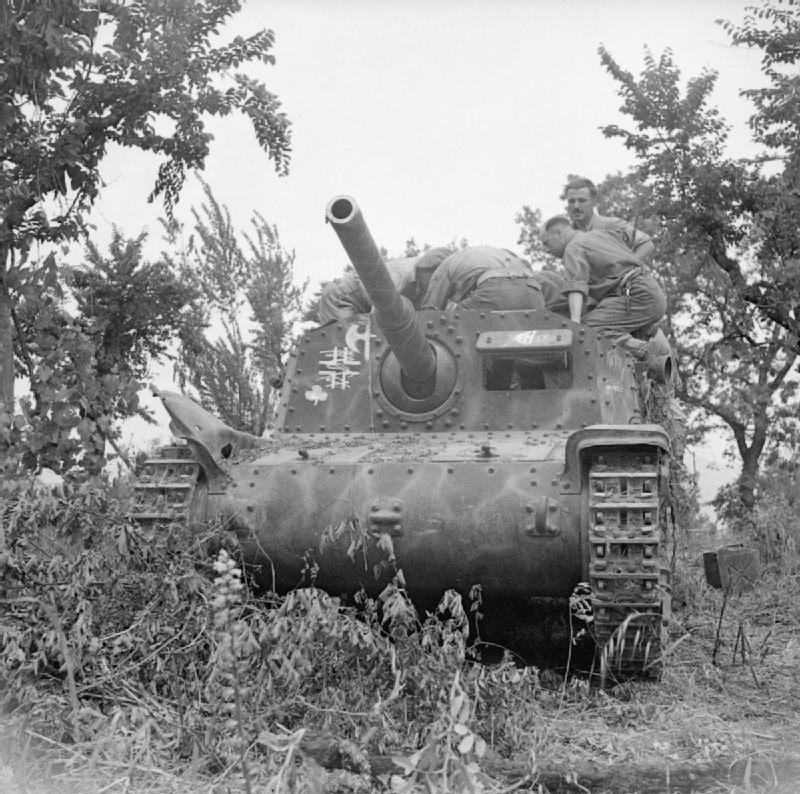