Expecting the battlefields of World War 2 to develop as they had done in the previous great war, British tank designers set about designing a tank that could breach any fortification the enemy may erect, and shrug off incoming defensive fire.
Previous studies had lead to the A.33 Excelsior, a Heavy/Assault Tank and a dead end. It was basically an up-armoured version of the Churchill, built on the Cromwell chassis. Nuffield Mechanisation & Aero Ltd. soon answered the call for a completely new project, with no less than 18 separate designs lasting until February 1944. Eventually, the AT.16 was approved by the War Office. They approved a direct pre-production run of 25 vehicles without prototypes. September 1945 was set as the deadline at which they would be available for operational service.
This vehicle would be immortalized as the Tortoise. Quite why it officially received this name is unknown. The name had already been reserved for a heavy AFV in 1942, however, that never got off the drawing board. Either way, the similarity to the animal is not hard to miss. 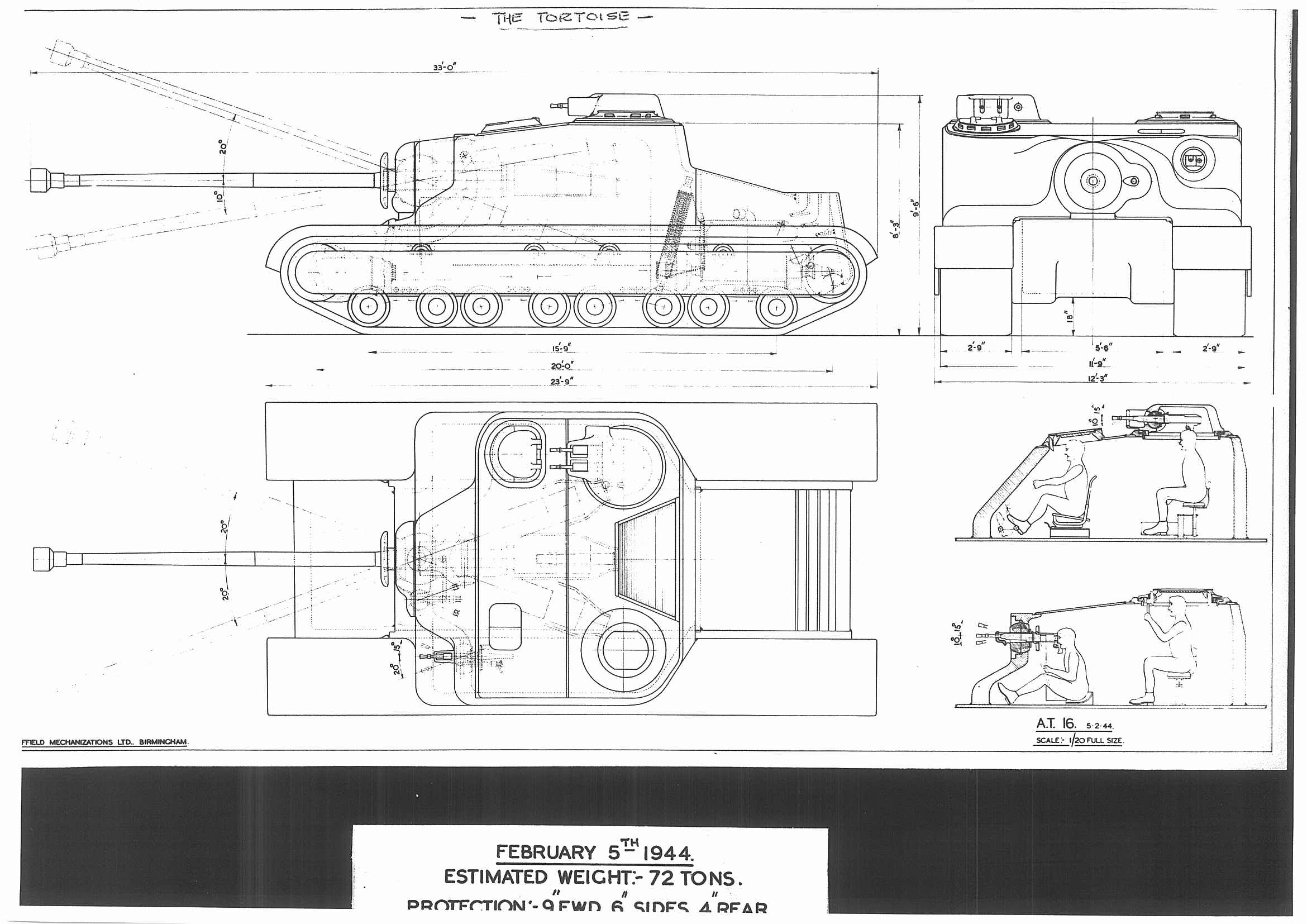 Original schematic of the Tortoise

The Tortoise epitomizes its reptilian namesake. It is slow and ungainly but well armored. It was one of the heaviest British tank ever built, at 78 tons. Only the 80-ton TOG II supersedes it. Most of this weight consisted of its up to 230 mm (9.06 in) of frontal armor and the potent 94 mm (3.7 in) high-velocity gun. This self-propelled gun, however, had very limited tactical mobility. 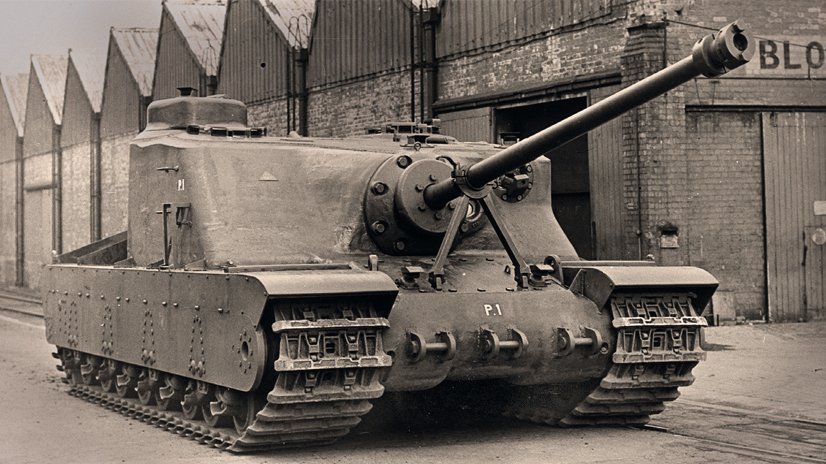 Early model of the Tortoise. Prototype one to be exact, identified by the stenciled “P1”.
The class of the Tortoise was first defined as heavy assault tank by the Secretary of State for War and the Minister of Supply in a Joint Memorandum in April 1943. Its goal was to clear fortified areas such as the Siegfried Line so its configuration largely favored armor over mobility.
In an interesting side-bar, it is apparent from historical documents that Mr. Duncan Sandys, who was Secretary of State for War and also Prime Minister Churchill’s son-in-law, backed the project.

As is to be expected from a tank of the Tortoise’s intended role, it was extremely well armored. This utmost importance in terms of protection was given to the tank’s casemate superstructure. It consisted of a single monstrous casting and accounted for most of the A.39’s weight.
This casemate was fronted by steeply sloped frontal armor measuring 228 mm (9 in), decreasing to 178 mm on the sides and rear and 33 mm (1.3 in) on top and bottom. The running gear was protected by thick side-skirts.

The Tortoise bore an extremely potent gun, certainly more powerful than any weapon carried by any serving British vehicle during WWII. This gun was the Ordnance Quick-Firing 32 pounder, an intended replacement for the Ordnance QF 17 Pounder.
Like the feared German 8.8cm, this 94mm (3.7 in) gun was derived from an anti-aircraft gun. It used a separate charge and shell, meaning the projectile was loaded before the propellant. The gun proved more than capable of destroying both concrete structures and tanks thanks to its 14.5 kg APCBC (Armor-Piercing Capped Ballistic-Capped) shells which it fired at 2880 ft/s (880 m/s). The tank carried 60 rounds with 12 in the “ready-rack” and the rest stored in various spots under the floor of the crew compartment. On some of the prototypes, a small loading port was added to the left flank of the casemate.
The 32-Pounder was fixed to a large ball mounting in the center of the tank’s frontal armor. It was protected by a large riveted armored collar. This allowed an extremely wide firing arc of 40 degrees to the left and right, and an elevation/depression of +20/-10 degrees. It was aimed through a periscope on its right, which was protected by the same riveted collar. Underneath this was the travel-lock, or gun-crutch as it is called by the British.
Tests were performed against a Panther at 1000 m, showing it could easily punch through its frontal armor. In fact, it was found that the 32-Pounder could deal with almost all of the late war German heavily armored vehicles. Development of the tank gun ended with the war, however, and the 17 Pounder was eventually replaced by the 20 Pounder.
The secondary armament comprised three compact BESA 7.92mm (0.31 in) machine guns. Two of them were in a rotating cupola on the right rear of the superstructure. 1 more was in a ball mounting on the top left corner of the frontal armor.
The A.39 was also covered in smoke dischargers, with a total of three 6-tube banks. Two of these were located on each side of the frontal armor and another was attached to the left side of the machine gun turret. The tank was also outfitted with the standard issue 2 inch smoke-bomb launcher.

The huge superstructure was home to the entirety of the 7 man crew which consisted of the commander, the gunner, the machine gunner, 2 loaders, a driver and a co-driver. 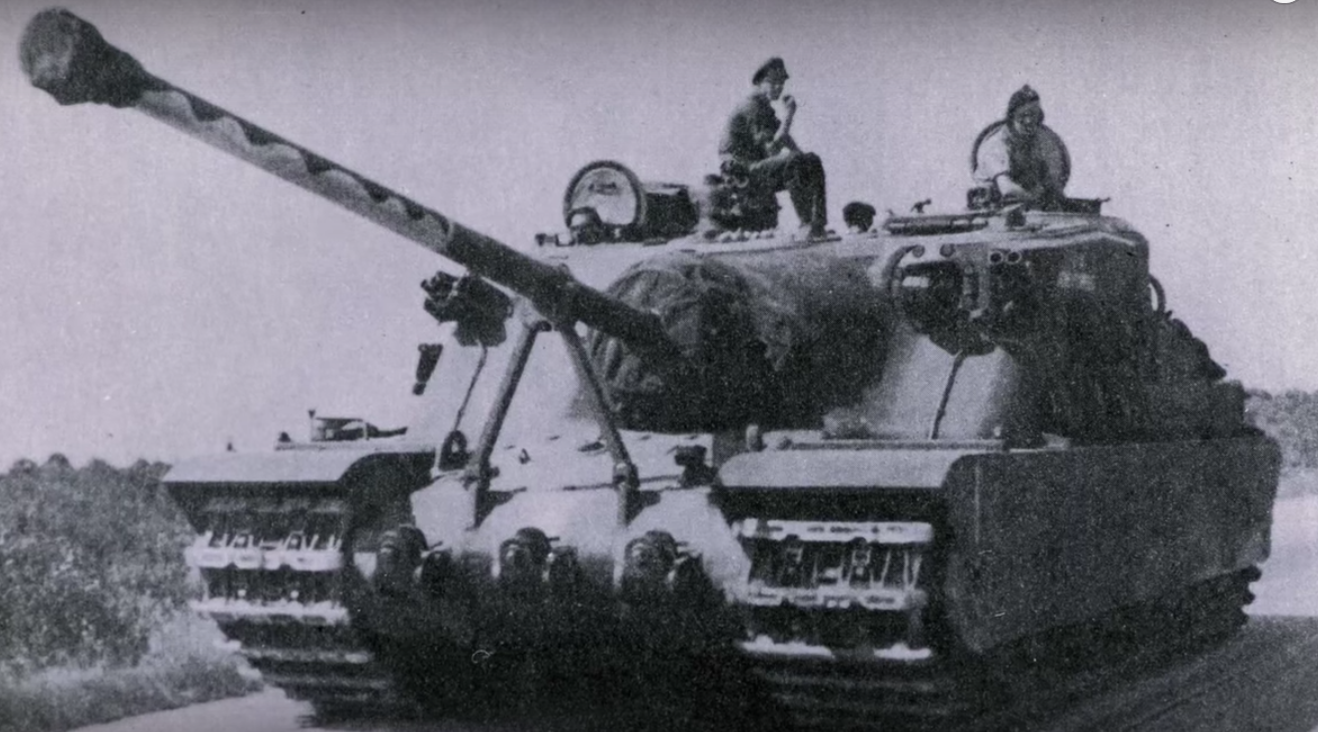 The Tortoise during trials with two of its crew. Photo: The Tank Museum
The commander was positioned on the left rear of the crew compartment under a rotating cupola, equipped with multiple periscopes. To his front he also had an azimuth indicator, quite a new feature at the time. Directly connected to a clone unit in the gunners position, this indicator allowed the commander to lay the gunner onto a target, if he had spotted one. Directly to his front sat the bow machine-gunner, who operated the single BESA 7.92mm MG in that position. The gunner was in the center of the vehicle, with the 2 loaders directly behind. The driver was found on the front right of the tank. Behind him was the small machine gun turret on the vehicle’s roof, but who exactly was stationed there is unclear.

The mobility, as already mentioned above, was not one of the strongest points of the Tortoise. The whole 78 ton mass was propelled by a 600 hp Rolls-Royce Meteor V12 derived from the Merlin engine equipped on the famous Spitfire fighter aircraft.
Fitted in this lumbering beast however, it only gave a power to weight ratio of 7hp/ton. Therefore, the top speed was capped to 19 km/h on flat at best. On rough terrains it was even slower. This petrol engine was extremely thirsty and the tank would exhaust its 530 liter fuel supply in a very short amount of time. This meant the Tortoise had a very limited operational range of approximately 87 miles (140 km).
The drive wheels and transmission were located at the front the vehicle. The drivetrain comprised four bogies on each side of the hull. Each of these bore two doubled, rubberized road wheels on torsion bars. The tracks were 2.9 feet (34.8 in) wide . 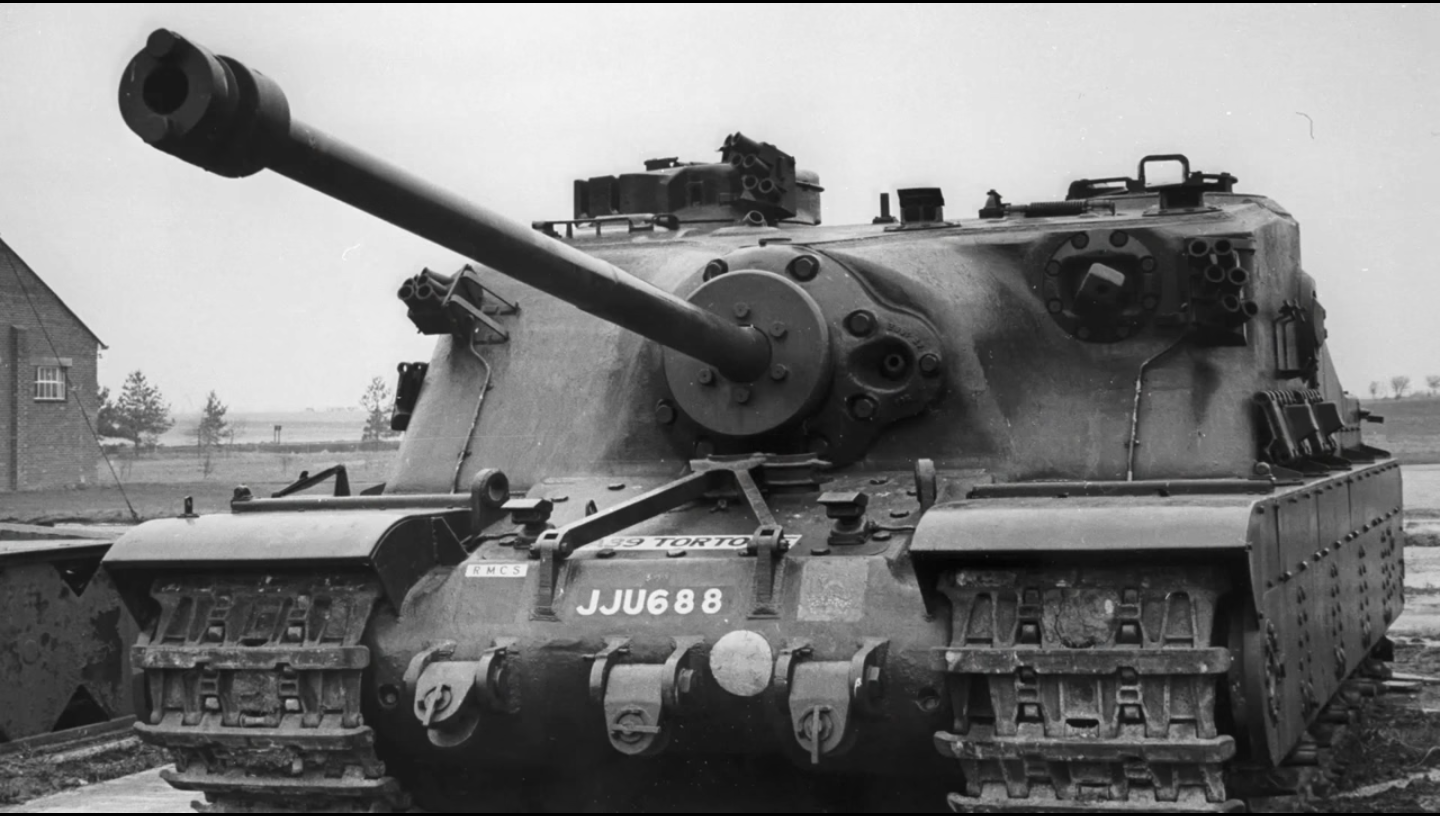 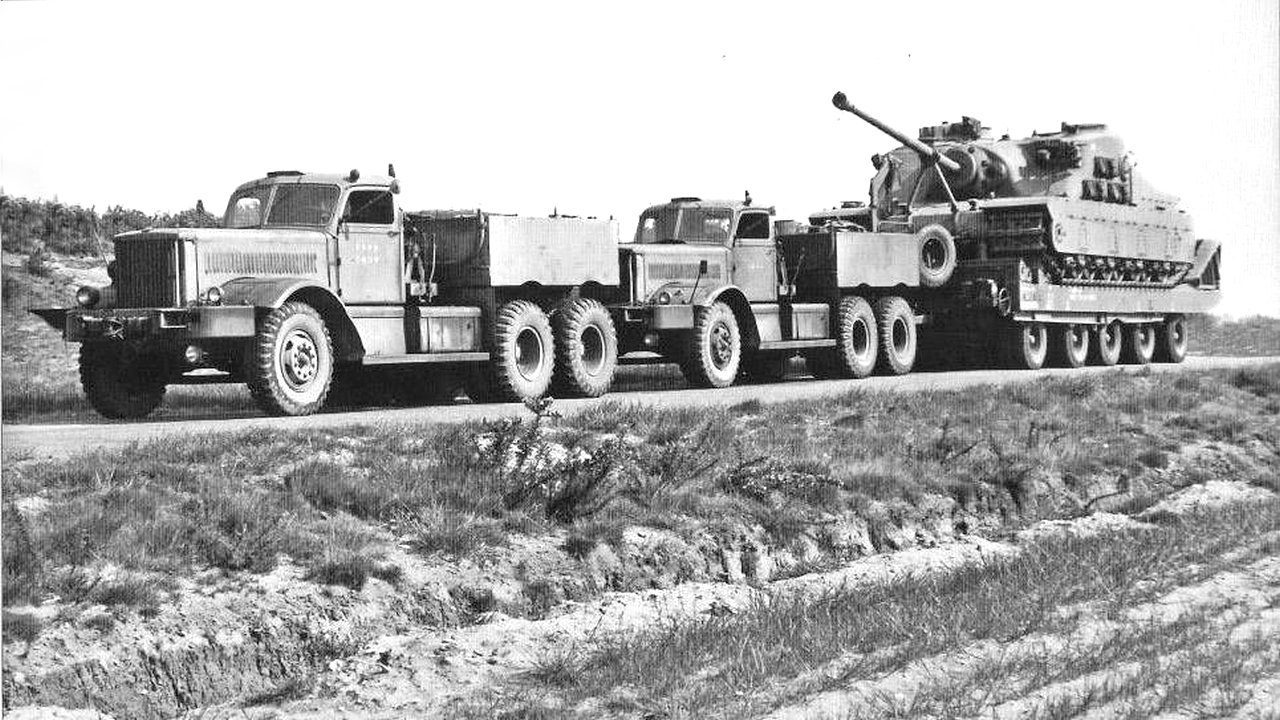 The Tortoise needed 2 heavy-haulage trucks to transport it. Photo: The Tank Museum

Testing in the BAOR

By the Second World War’s end, only six Tortoise prototypes had been built, and these were not delivered until 1946. A few of these 6 (exact number unknown) were sent to Germany for testing after the war as part of the British Army of the Rhine (BAOR).
During trials, it showed its reliability. The gun proved incredibly effective during tests, with the tank itself providing a stable gunnery platform. A serious problem, however, was the logistical issues created by the sheer weight of the tank. It required 2 heavy-haulage trucks to move and carry it. Also, not one of the British Army’s mobile bridges, such as the Bailey Bridge, was able to support it.
The Tortoises tested by the BAOR were not only used in gunnery and crossing trials. They were also used to test the strength of local bridges to see if they would hold up to the weight of future Allied heavy tanks. The picture below shows one of the Tortoises with measuring equipment fitted in place of the gun. 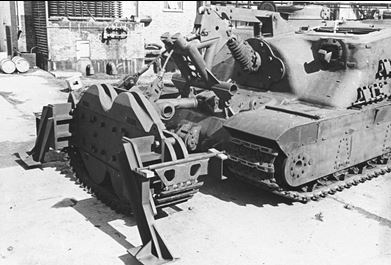 Photo: Ed Francis
With the trials over, the Tortoise project was abandoned. The era of a separate tank for every role was over. Assault, Infantry, and Cruiser tanks would all be replaced by the Universal, or Main Battle Tank which, in Britain’s case, would be the Centurion. This was a fate shared by other projects like the A.43 Black Prince.

There are 2 surviving Tortoise’s today. One, in perfect running order, is located at The Tank Museum, Bovington. It was moved there after its last trials at Larkhill in 1949. It is the second heaviest vehicle at the museum, with the TOG a close first.
It is in running condition but was only displayed once at the museum’s “Tankfest” in 2011. 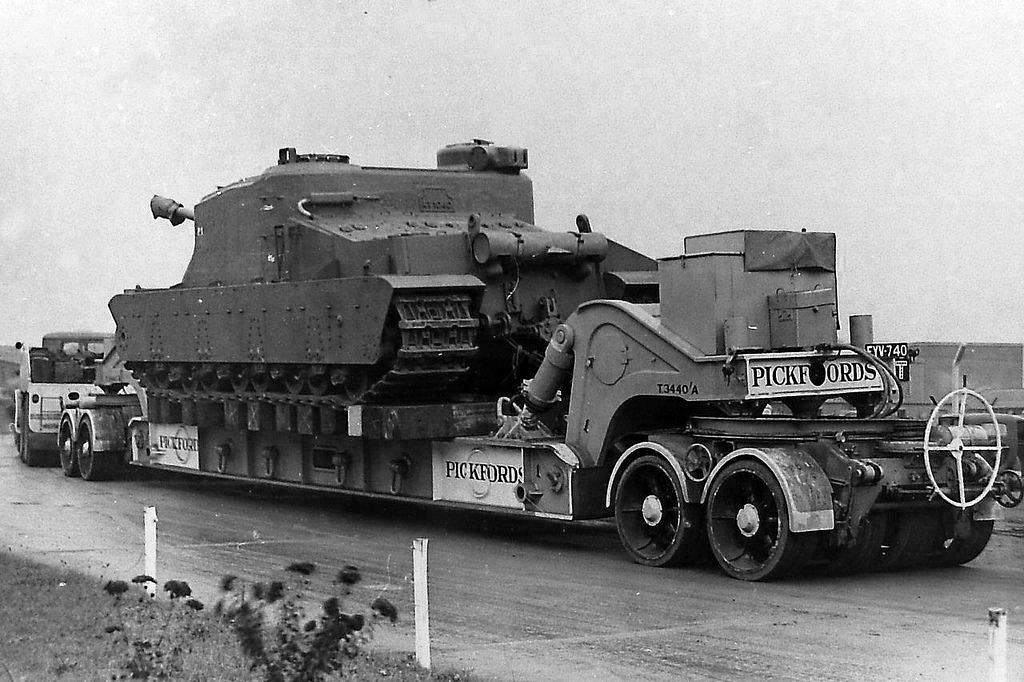 Bovington’s Tortoise in transport
Another can be found on the Kirkcudbright military training area in Scotland. It is on MOD (Ministry Of Defence) property and a designated Site of Special Scientific Interest. This designation complicates the recovery due to concerns about damage to the surrounding area. 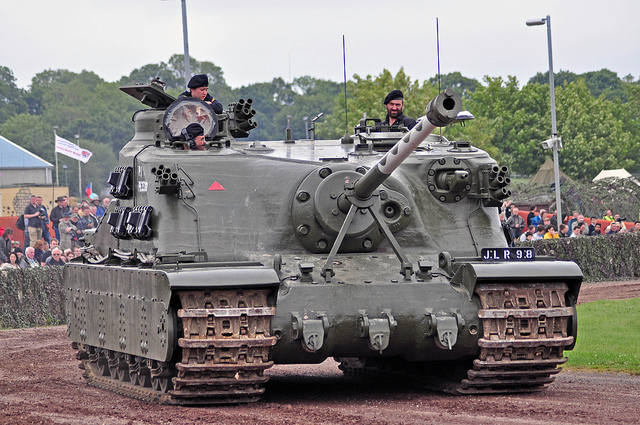 The A39 on Military Factory.
Osprey Publishing, New Vanguard #216, Super-Heavy Tanks of World War II
The Tank Museum, Bovington. (Article on their website)

Tank Encyclopedia’s own rendition of the A39 Tortoise by David Bocquelet.

I dont know what it is about this machine, but it really does look sexy ^^

I can only agree…
– TE Moderator

Hello,
again great article. It is interesting to read about A39 Tortoise. I especially like u described power of gun.
One thing is need to be mentioned: at “Design and Develoment” chapter author says that A39 weight 78 tons and later in “Mobility” chapter and in information box it is said that weight is 87 tons. The funniest of all it is that everything of this are correct, but extremally confusing!
Let me explain that way: actual A39 weight is 78 long tons, 87 short tons which is about 79 metric tones. This gives power/weight ratio at 7,6.
I would like to ask u (after wikipedia): “In order to avoid confusion, especially in international environments, it is recommended to always use the full name: “short ton”, “long ton” or “metric tonne”.”
Good day 🙂

How much armor did this have compared to the T95/T28?

And penetration compared to the 105mm of the T28

One of these leviathans is preserved at the Bovington Tank Museum. For those of you who don’t know: IT RUNS!!!!

Real but they never left the drawing board, there are also others in the series such as the AT 1. The AT-15 was the design that eventually became the Tortoise after some changes, such as the 32 pounder gun.
TE Moderator

ok really odd question but does it use the same tracks as the centurion?? If you know please tell me

I’ve just checked that and they are about half the size! but would the conqueror have the same width tracks?

“Either way, the similarity to the animal is not hard to miss”

I think that ‘not’ should not be there