Frank Stanley Wrona of Aurora, Illinois, had his go at supporting the war effort in World War Two even before the United States had declared war. On the 18th September 1940, just over a year after the German invasion of Poland started World War Two, Frank Wrona applied for a patent on his own design for a ‘Military Tank’.

The design was very specific in its intention. It was shaped with its pointed nose and curving body to maximize the chances of deflecting bullets and shrapnel and provided with ventilation to remove fumes and heat from inside whilst still protecting the crew from noxious gas and flamethrowers.
The overall shape is best described as an uncut cigar, pointed at the front and rounded at the back. On each side are two rectangular shuttered loopholes and two large rectangular doors. In the front are two roughly square-shaped openings for the main guns, and in the roof, are ten vents opened by means of a rod and handle-crank system. The whole system is meant to be carried on a rectangularly shaped hull between two sets of tracks, each with six wheels. 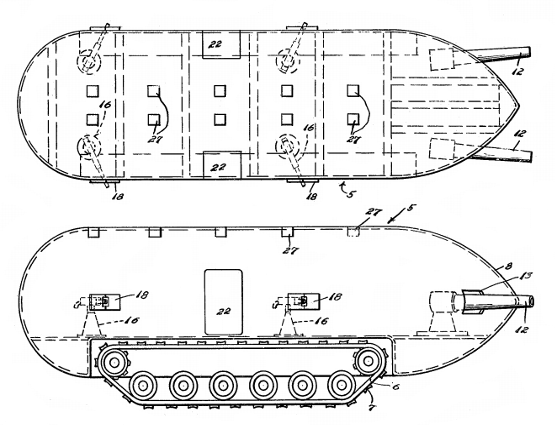 Side view and top sections of the Wrona Tank design intended to show the positions of the multiple roof vents. Image: US Patent US2319178
The outward opening doors for access and exit were to be provided in opposite sides of the vehicle and fitted with an internal locking mechanism by means of a turned nut to lock them into place. When opened, they moved upwards like a clamshell door, although there is no spring or power system to assist in the opening of what would be a very heavy armored door. The six wheels are crudely drawn on what appears to be a very rigid type of suspension which is not described. No system of propulsion is described either, although presumably, he envisaged this would go below the floor level of the main compartment in the rectangular box-shaped section between the tracks.

The walls of this cigar shaped tank are simply described as “heavy armor plates suitably welded or otherwise secured together” fabricated by means of attaching them to a rigid frame. No thicknesses is mentioned, but to be bulletproof, it is reasonable to expect 10mm or so, which, considering the size of the area being protected, would still have resulted in a very heavy vehicle. 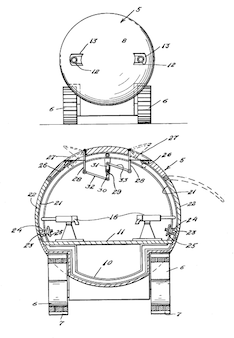 Front and sectional view of the Wrona Tank showing the cigar-shaped body sitting atop a rectangular box attached to the tracks. The dotted portion represents the side door in the open position. Image: US Patent US2319178

Illustration of the Wrona Tank in a fictional livery based on period examples. It was modeled by Mr. C. Ryan, funded by our Patreon Campaign.

Multiple large caliber guns in sealed compartments are arranged along the front, and smaller caliber guns “such as machine-guns” would be fireable from inside hidden shutters along the sides of the tank as required and which would slide to the side to expose the guns, fire, and then slide shut under spring pressure. At the front are two guns “preferably… of an extremely large caliber be mounted in the front end with the barrels, therefore, protruding through openings provided in the body”. 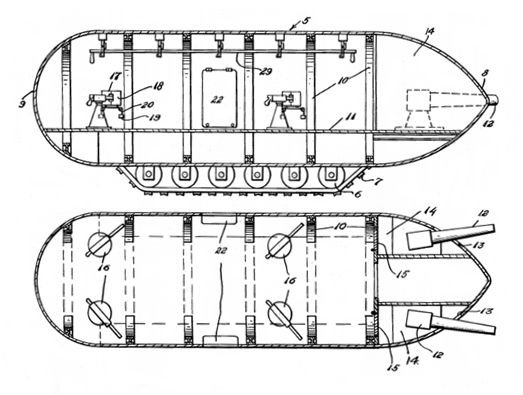 A sectional view of the Wrona Tank showing the very naive arrangement of firepower within the huge crew space. Image: US Patent US2319178
The two main guns pointing forwards appear to lack the ability to move inwards meaning there would be a blind spot directly to the front of the tank and the positions would have very limited traverse of just 10 degrees or so to the outside. This is a very poor arrangement for the main firepower of the tank preventing both guns being trained on a single target at the same time and meaning the entire vehicle has to turn to slew the guns properly. The side guns are poorly situated too. Sat on fixed pedestal mounts and firing through narrow openings covered with shutters they lack the ability to even provide overlapping fire. Considering the number and weight of weapons selected for the design, this is a large oversight. The machine-guns are described but not drawn, and it is possible that the designer simply envisaged these machine-guns as being the means to cover these gaps, but it is not described how this would be done.

It is, frankly, a terrible design. It would not have been a good design for World War One let alone World War Two. The idea that, between all of those shuttered openings, doors, and roof vents it could remain immune against chemical attack or flamethrowers is simply not realistic. The number and position of the firepower are totally unsuitable with no rationale presented as to why it would need the number and type of guns mentioned. The armor, at just ‘bulletproof’, is woefully unsuitable for such a large and inevitably heavy tank and the shape itself would cause problems. It would be far too large to easily transport and with the size of the overhang at the front probably would just become stuck in rough country. The tank then exemplifies many of the problems of amateur design not thinking through the problems and compromises inherent in the design of a vehicle as complicated as a tank and no doubt these obvious limitations were amongst the reasons the design never left the pages filed at the Patent Office.
Frank Wrona clearly thought the design had some merit though, as he also submitted it to the Canadians for their consideration and was granted a patent by the Government of Canada in February 1942. As far as can be ascertained, this was as far as Mr. Wrona’s military inventiveness went and no other patents are filed in his name for tanks or anything else.

One reply on “Wrona Tank”