The Carro de Combate Ligero Para Infantería Modelo 1936, also known as the ‘Trubia L.A. nº1’, is one of the many tanks that were imagined but never delivered. Although it never left the drawing board, it went on to heavily influence the Trubia-Naval, the most heavily produced tank of the Second Spanish Republic. Original blueprint of the tank from Trubia arms factory showing the side profile of the vehicle. Drawn by Victor Landesa Domenech and Rogelio Areces.

In 1935, Commander Victor Landesa Domenech, an artillery officer attached to the Trubia arms factory in Asturias (Northern Spain) and Rogelio Areces, the Trubia arms factory’s Chief Engineer, teamed up with Captain Carlos Ruíz de Toledo, a Commander in charge of Batería de Carros de Asalto de Artillería [Artillery Tank Battery] in its first engagements during the Rif War, to design what would become Spain’s first indigenous tank on their own initiative . The idea was to design a tank to overcome the major faults of the Renault FT, Spain’s most readily available tank at the time. With increased firepower in an innovative system involving two overlapping, independently moving turrets, each armed with a Hotchkiss M1914 7mm machine gun and marginally better armor and engine power, the prototype improved upon the FT.
The design was deemed a success and a new improved model was ordered; this would be the Trubia Serie A. The main difference of the serial version compared with prototype was a larger size, an additional crew-member, and most importantly, a new suspension system (‘Orion’) and engine acquired in Germany. This system was supposed to improve upon traditional systems in addition to enhancing turning capabilities and minimizing the effects of the tracks on roads. In this integrated track design, the links were suspended from the chassis and held together by a lateral metal wall. This system was designed to prevent the tracks from coming off when maneuvering. The first serial Trubia Serie A in the factory it was built. Photo: Artemio Mortera Pérez (2007), p. 8
Four of these tanks were built and tested in 1926. During the tests, deficiencies in the tank (especially in the new suspension system which kept breaking) were noted, and modifications were recommended, with at least one of the tanks being modified and re-tested far more successfully in May 1928. Although there was some interest in the tank, political instability and lack of funding condemned the vehicle.
Despite this setback, Landesa Domenech and Areces would collaborate again and in 1930-32 designed a tractor for military and agricultural use, which they christened ‘tractor Landesa’. This tractor would be pressed into Army service in 1935 following a series of successful trials. It also had a military upgrade which saw service in the October Revolution of 1934 in Asturias and during the Spanish Civil War.
The success of their tractor design (based on the same principles of the Trubia Serie A), prompted the two engineers to design a new light tank which they intended to exhibit to the Army.

The design of the L.A. nº1 owed much to the Landesa tractor and shared many of its features.

It was basically the Landesa tractor but in reverse, with the engine at the back and the crew compartment at the front. The rearmost part had the engine ventilation consisting of eleven or twelve vertical lats in the front grille, with an additional twelve-lat grille placed horizontally on each side tilted slightly inwards. The hull side was angled at 64º-66º and had two large hatches on each side for crew access. The large size in comparison to the rest of the tank would have most certainly affected armor effectiveness. An original blueprint from the Trubia arms factory showing a face on view of the tank with the turret traversed to the left. Drawn by Victor Landesa Domenech and Rogelio Areces.
The turret was placed atop the hull and consisted of a circular structure with a shallow dome at the top. To the front was the main armament and on each side, there appear to be oval stroboscopes with horizontal turn allowing for continual vision.
The uppermost frontal plate raises some questions. There appears to be both a vision slit on the left and another oval stroboscope on the right. This position would be used only by the driver, so it is difficult to understand why the designers considered two different vision devices. From this plate, the armor extended almost horizontally and then almost vertically creating a slightly angled plate which had a machine gun. Below this, the armor took a rounded shape. 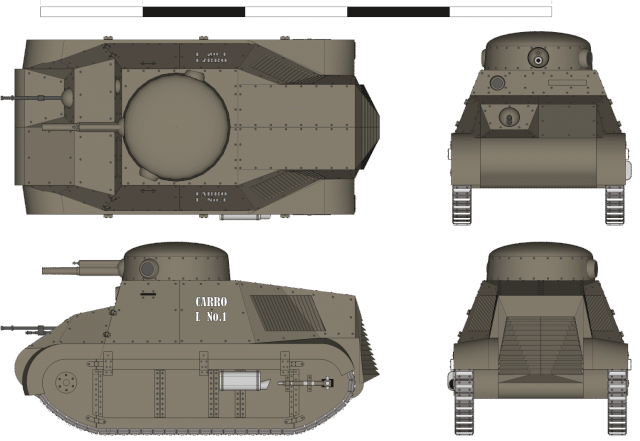 Both of these illustrations are by Saiful ‘Giganaut’ Adli Azari, funded by our Patreon Campaign.

The armor on the L.A. nº1 was one of the tank’s most innovative, interesting and distinguishable features. It consisted of conventional armor and composite armor.
The sides and front of the vehicle consisted of an outer layer which was 13mm thick and the inner layer a mere 3mm thick with a 25mm space in between. The rear was angled at 66º whilst the front was angled at 64º. It is unknown if the spaced section of the armor was filled with wood, cotton, sand, glass, or if at all. Due to simplicity, wood would have most likely been used as the filler. This type of armor would have been effective against HE rounds and small arms fire. The rear, top and bottom of the tank were 3mm thick. The turret armor thickness is unspecified. All armor was made from chromium-nickel steel. The tank was supposed to mount a 40mm gun but there are no details as to which one. However, considering that Landesa Domenech and Areces had intended their previous design (Trubia Serie A) to be equipped with a 40mm Spanish-built modified Ramírez Arellano 40mm infantry gun, it is not too far-fetched to imagine they would consider this gun again. The gun was to have 8º depression and 30º elevation.
To the right of the driver was a 7mm Hotchkiss machine gun.

Each track consisted of a long ellipse-shaped structure formed by two parallel steel sheets and was covered by a mudguard. Between the two sheets, there was a track for the track rollers to travel through. Between the steel sheets, there was some sort of drum brake.
Unlike in most other vehicles, the track rollers were integrated into the tracks and moved in unison with the track links along the tracks set between the two sheets.
This was an updated copy of the one on the Trubia Serie A and Landesa tractor, albeit, smaller.

The driving and combat compartment housed the driver, who sat at the front, and the gunner/loader, who was positioned behind him. Given the small size of the tank, the gunner/loader would have had to sit or crouch when inside the tank. Behind them was the engine compartment which housed the engine, an 80hp 6 cylinder MAN D-0530 engine. This engine was supposed to give the tank a top speed of 42 km/h. The gearbox had 3 forward gears and one reverse.

What Became of the Project?

Although the ascension of José María Gil-Robles to the Ministry of War in May 1935 revitalized interest in tank development, this would not last, and with the leftist Popular Front taking office in February 1936, the appetite would be satisfied for the time being.
The design did, however, resurface a few months later in August 1936 in the shape of a new almost identical tank, the Trubia-Naval. As such, this paper design could almost be considered its genesis.

How effective this tank would have been in the early stages of the Spanish Civil War is impossible to tell. Armament-wise it would have been the most powerful available and its speed was superior to any other Spanish tank at the time.
Nevertheless, there were some major flaws in the design as later demonstrated by the Trubia-Naval. The experimental suspension system was outdated and proved not to work, as its complexity meant it had a tendency to break. The armor, although innovative, had not been tested and what results it may have had in test conditions can only be speculated. The tank was probably too small and the crew was overburdened. Nonetheless, the design remains a brave and courageous attempt to modernize Spain’s armed forces and avoid dependence on foreign tanks.

Good article.
Dear Author, Stan Lucian said last year that you plan to visit the Spanish archives.
And I have a question, have you already been there?
If yes, found something interesting?
Especially interested in information about Verdeja III, Carro de 15t, Carro de 20t, RT-1 (Republicano Tanque I) / clone soviet T-26 and projects StuG III upgunning

Hello Mendur,
I regret to say I have not had the time to visit the specialised archives, but it is on my to-do list. Spain has not been very good in keeping this information in one place and most of the information regarding tanks such as the RT-1 or Carro de Asalto Benach are being found in council archives rather than in a central library.
I do have some information on the RT-1 and StuG III upgunning, but still a lot to investigate.
My findings, without doubt, will be found here first.
Gareth (the author)