France has a long history of scientific, technical, military, and cultural achievements. They also have a particularly important place in the evolution of the modern armored vehicle, and in 1940, was the predominant armored power in Europe. A series of well designed and well-protected tanks, such as the Char B1, made up the mainstay of the French armor, forming a potent foe to a potential adversary. In 1940, this was obviously Germany, as France, along with Great Britain, had declared war on Germany in September 1939 following the invasion of Poland. The armored might of France was a serious threat to German plans for the invasion of France, but whilst the Char B had an abundance of armor, there were also designs which, perhaps thankfully, never made it to battle. One of these was from the pen of Joseph Francois Raymon Collomp of Marseilles, and his design for a tiny individual one-man tank was seriously and fundamentally flawed in both concept and design. It never saw action and, whilst even the mighty Char B1 succumbed to the Germans in 1940, the Collomp individual tank succumbed to common sense and was thankfully forgotten in the chaos following the fall of France.

Collomp started his design ideas with a single piece of logic: the large and modern French tanks were ideal for the large battles, striking deep within enemy territory, but were unsuitable for small actions. These ‘small’ actions would include reconnaissance work, minefield clearance, and providing supporting fire for advancing infantry. In order to reduce losses amongst the infantry forces, Collomp followed the same mental route of many others and conceived of a small armored vehicle capable of protecting the men from small arms fire. Just like those other ideas from ‘push shields’ in WW1, the Italian MIAS, or some hilariously poor ideas from General Martel in Britain, Collomp’s ideas were seriously flawed. He completely ignored the existence of a large number of small tanks already in service in France, including the Hotchkiss H35, Renault R35, and even the rather ancient and obsolete Renault FT from WW1. Instead of considering the use of a vehicle in service, his proposal was unlike anything in use at the time and smaller than any vehicle in service, not much larger than a bathtub, and of about the same combat value.

Internal view of Collomp’s one-man tank design of 1940. The area marked ‘16’ was the hatch to lay mines or charges and the area ‘B’ at the back was the electric motor. The items marked ‘14’ are control switches. Source: French Patent FR867026(A)

Submitted on 8th January 1940, the design was filed after the declaration of war against Germany but prior to the Battle of France. Overall, the design was a single large ‘cigar’ shape with two tracks running completely around the circumference of the vehicle from front to back. The front and back of the vehicle were curved and the profile was extremely low, as the occupant/s would have to lie prone inside the vehicle on a mattress facing forwards. Operating a forward facing automatic gun (presumably a machine gun), the soldier inside would be in a cripplingly uncomfortable position, especially over rough terrain as the vehicle moved and would be unable to reposition themselves without leaving the limited protection the armor offered.
Just to add an unnecessary layer of complexity to the design, Collomp suggested the addition of both mine-laying and mine-clearing equipment, although the diagram provided with Collomp’s design shows only a single roller held by two arms coming from the vehicle. Presumably, this roller was intended to roll-over and detonate mines, but this would mean it would require a certain amount of mass to simulate a tank and this then adds a weight burden to this tiny machine. All of this weight, the man/men (crew), weapons, steel armor, and now mine roller was to be propelled silently and Collomp planned for an electric motor, adding yet more complexity to the vehicle.
No armor thickness was specified, although, to provide any useful protection from small arms fire, it would need at least 6 mm of protection. Likewise, no performance in terms of speed or range was specified either.
A small hatch was fitted in the front through which the occupant could directly access the soil to lay a mine, although this clearly meant he would have to carry landmines in the vehicle with him. With no space inside in which to turn, this would involve having to drive around laying with his face next to one or more landmines, which is unlikely to have been a popular concept, particularly when facing enemy fire.

External view of Collomp’s one-man tank design of 1940. The area marked ‘6’ was the large hatch on the left-hand side (another was on the right) for access/egress. Of note are the arms and roller for the clearance of landmines. Source: French Patent FR867026(A)

This diminutive vehicle was planned by Collomp to be just 2.20 m long which, with an estimated length of perhaps 1.70 m allowed for the crew, would mean just 50 cm or so in which to accommodate the electric motor and drives for the tracks. The entire affair was supposed to be not more than 50 cm from the ground to the top of the vehicle which, accounting for the space for the man/men inside, would leave very little ground clearance, meaning the vehicle would get stuck on almost any rock or tree-stump. Further, this very low height would also mean that the crew would barely be able to see over any obstacle, bank, or even long grass.
The tracks, running circumferentially, were fitted with drive wheels at the back and a series of small support rollers around the outside on which the track could run. No information was provided as to how the machine was meant to be steered other than steering switches, which likely meant the ability to vary the driving force delivered to each track causing it to turn. One notable feature though of value for the design was the thought of adding a large hatch in each side of the tank. This meant that, in order to get in or out the soldier would not have to be exposed to enemy fire at all and that, should it overturn, it was so light the soldier could simply right it himself having clambered out the other side.

Top view of Collomp’s one-man tank design of 1940 showing the roller for the clearance of landmines. Source: French Patent FR867026(A)

Illustration of the Collomp 1 to 2-man tank by Mr. C. Ryan, funded by our Patreon Campaign.

The patent drawings show just a single occupant lying prone on a mattress inside, but Collomp specifically mentions that the design could be made wider in order to accommodate a second crewman. This wider version would be even more limited than the single vehicle, as it would still have the same ground clearance but an even greater space between the tracks, making it even less able to traverse even very slight undulations in the ground. The purpose to which this second crew member might be put is not elaborated.
Obviously, a one-man version would leave the hapless soldier the burden of driving (with no indication of how to steer) and firing the weapon, but how this would be divided as tasks for two-men is unknown.

Front view of Collomp’s one-man tank design of 1940 showing the narrow field of fire or vision which would be available to the crew and also the incredibly low ground clearance. Source: French Patent FR867026(A)

The design is awful. For 1940, when there was already a substantial body of tank design work in the public domain, such issues as those created by Collomp’s design should have been both obvious and avoidable. His logic was clear and so was what he was intending in terms of saving the lives of soldiers, but what he created was little more than a premade coffin in which a soldier could became trapped in the mud or on an obstacle or drown in a shallow puddle. With little or no combat value due to no visibility, the vehicle could add nothing to an attack and it is therefore perhaps ironic that the mine clearing suggestion (albeit ignoring the roller) might have been the only realistic use to which the design could have been put. Operating in a straight line through a minefield, the occupant would have easy control and a comfortable lying position without having to tire himself out by crawling and be able to access the dirt in front of him through that hatch to probe for mines and defuse them. Add a mine-tape marker dispenser to the back to show a clear lane through a minefield and this vehicle might have had some utility but, as it was laid out, it is no surprise it saw no production or orders. Whether or not Collomb submitted his design to the military authorities is not known but, with such obvious problems, there was no likelihood that this would ever be added to the Army’s inventory.
If it is any consolation to Collomp, his idea was not even the last of such ‘one-man-prone-tanks’ or even the worst one, but it remains a terrible idea and one which, had it have been in place for 1940, would have added absolutely nothing to the defence of France except perhaps for providing a lot more scrap metal for the Germans. Considering it was submitted in January 1940 though, there would have been no time to have it in time for the Battle of France in May 1940, but it does lay within this ‘Phoney War’ period between the declaration of war and the invasion of France. Almost exactly one year after the fall of France, in June 1941, the patent application from Collomb was accepted by the French patent office under the Vichy Government. It was formally published two and a half months later on 3rd September 1941. A month later, a second patent from Collomp was published for a rotating-cylinder type rifle. He had submitted that one in June 1940, during the Battle for France and whilst that design had more technical merit than his individual tank, it too found no production. What became of Monsieur Collomp is not known. 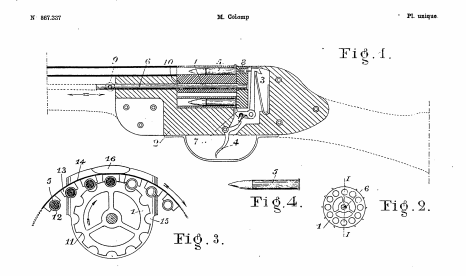 is anyone else confused?

When I saw the picture before reading the text, I though that the arms and rollers were a throwback to the Mk 1 British tank of World war 1.

I am confused much as you