By July 1942, the US National Defense Research Committee (NDRC), while working on developing the DUKW amphibious transport, concluded that a larger amphibious vehicle would be needed. They presumably expected that the DUKW’s limited capacity of 2.3 tonnes would be inadequate during large scale landings. Testing was done on a number of converted trucks, however, it was found that wheeled vehicles with payloads over 6 tonnes faced severe problems due to the increased ground pressure and unsatisfactory traction on beaches, their most likely landing point. It was therefore decided that a new project would be started, looking at developing amphibious half-tracks. These were meant to provide forces with larger supply payloads during landings in Europe and the Pacific without the inherent problems that wheeled vehicles faced. 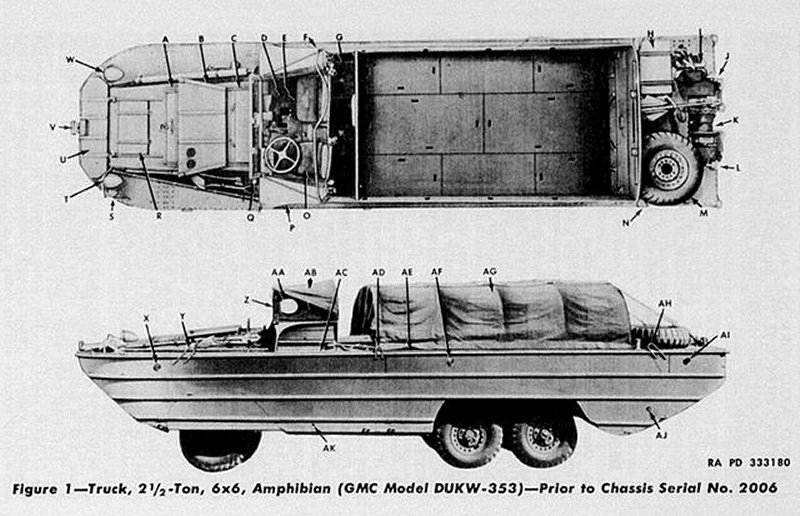 As a result of converted trucks failing evaluation, a number of half-track designs were drawn up for the newly started Pelican Project. These ranged from payloads as little as 2 tonnes, all the way up to an ambitious 25 tonnes. Some designs, in an effort to lower ground pressure and increase traction even further, featured an extra set of front wheels. These extra wheels, if powered, could have increased off-road performance, but none of the designs with them were given any further consideration.
It is not known exactly how all these designs were judged, but the final design that came out of the project did at least see significant evaluation. As well as being the last design in the project, it was also one of the largest. Weighing an estimated 9 tonnes empty, with a 9-tonne maximum payload, the vehicle was to be 15.3 m long and 4.4 m wide, larger than any other amphibious vehicle at the time. The design was to use a Ford 400 hp V8 petrol engine powering a pair of either Kirsten-Boeing or Voith-Schneider vertical propellers, giving the vehicle a water speed of 13km/h.

Blueprint of the final design of the Pelican Project Source: Half-Track: A History of American Semi-Tracked Vehicles, by R. P. Hunnicutt
To take advantage of the large number of new M4 Sherman tanks being produced and to potentially ease the logistical burden of developing a brand new tracked vehicle, the Pelican half-track was to share its VVSS (Vertical Volute Spring Suspension) bogie design. It was to have two bogies per side, totaling four road wheels per side with a central separate return roller, as well as the same track link design as on M4.

VVSS suspension was the standard suspension design of most US armored vehicles until it was replaced on the M4 Sherman by HVSS (Horizontal Volute Spring Suspension). This surviving M4A4 can be found at the Portland D-Day Center, UK. Photo: Mark Nash
A full-width ramp at the rear of the vehicle provided access to the cargo hold which was large enough to accommodate a 6-ton 6×6 truck of any model. Unlike regular half-tracks, the 2.7m wide driver’s cab was placed at the very front of the vehicle in front of the engine. The driver was on the left and on his right would be seated the rest of the vehicle’s crew.
A number of scale models of the Pelican half-track were built and used in water tests, but the project was soon canceled and no working prototypes were built.

In May 1944, the NDRC was requested by the Ordnance Department to once again design an amphibious half-track to assist during landing operations. One main difference with this new program, however, was that the vehicle was required to have a three quarter length track. This was similar to that of German half-tracks, instead of the much shorter two-bogie design of the earlier Pelican half-track and other US half-tracks. This design would reduce ground pressure by having significantly more track in contact with the ground and more road wheels to support to vehicle.
Sparkman & Steven, Inc., contracted by the OSRD (Office of Scientific Research and Development), drew up an initial half-track design with an empty weight of 17 tonnes, and a payload of 13.6 tonnes. At a maximum weight of 30.6 tonnes, this design greatly outweighed the earlier Pelican’s 18 total tonnes. This could be credited to the three quarter length track, but at 12.7 m in length and 3 m in width, the vehicle managed to stay significantly smaller in size. 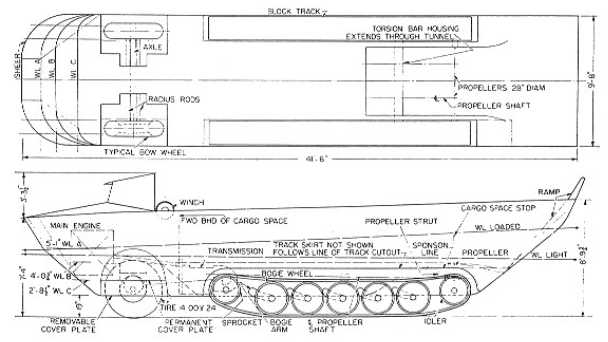 Blueprint of the initial vehicle design. Note the sloped top edge of the hull, and the matching sloped waterline, suggesting the vehicle would be tilted back slightly when in the water. Source: Half-Track: A History of American Semi-Tracked Vehicles, by R. P. Hunnicutt
The vehicle was to be powered by the Continental R975-C4 petrol engine, coupled with the General Motors 900T Torqmatic Transmission. This combination, the same as on the M18 Hellcat, would have given the vehicle 400 hp with an estimated top speed of 48 km/h on land, and 13 km/h in water. The front two wheels were powered, and propulsion in water was provided by a pair of 711 mm (28 inch) diameter propellers underneath the rear of the cargo bed. 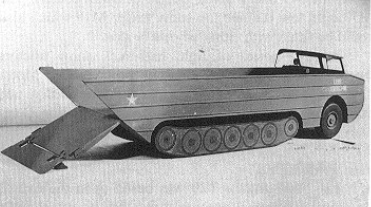 Scale model of the initial vehicle design. It is unclear why the model lacks the sloped top edge of the hull, the rounded bow, and the cover plate over the wheels that are present in the blueprint. It is possible these modifications were done in the time between the initial blueprint and the model being made. Source: Half-Track: A History of American Semi-Tracked Vehicles, by R. P. Hunnicutt
The tracks, being longer than those of the Pelican half-track, allowed the design to have 5 dual road wheels which were also substantially larger. The wheels were on independent torsion bars instead of VVSS bogies, giving them more vertical travel and providing a smoother ride. The tracks also differed from the earlier Pelican in that they were without return rollers, an unusual feature on US vehicles. The design of the links was the same as on the T87 105mm Howitzer Motor Carriage, an ongoing project to have an amphibious vehicle using M18 Hellcat components armed with a 105 mm howitzer, a project that ended soon after the war did.
The design was later modified to include an additional road wheel by moving the drive sprocket forward. The rear ramp was also reshaped to provide clearance when entering an LST (Landing Ship Tank), reducing its overall length to 11 m and its overall height to 3.05 m. On the 29th June 1944, the improved design was designated Half-Track Amphibian Cargo Carrier T32. It was requested that three prototypes be built for testing, but Army Service Forces denied the request and the entire project was canceled, just over one month after the project was started.

The revised design that was submitted for prototype testing designated T32. Source: Half-Track: A History of American Semi-Tracked Vehicles, by R. P. Hunnicutt

Later version of the T32.

These illustrations were produced by this article’s author, Mr. C. Ryan, and were funded by our Patreon Campaign.

While the Pelican design, had it been built, might have suffered to a degree because of its small ground contact area for its weight, both the Pelican and the T32 seem to have been reasonable designs for their requirements. Ultimately, the sheer number of DUKWs being produced from late-1942 onwards outmatched any potential production numbers of the two vehicles, making them largely redundant apart from their valuable ability to bring regular trucks and other large vehicles to shore.
The failure of both projects did not end the US’ interest in large amphibious cargo vehicles however, as they would go on to attempt others after the war. One such vehicle was the capable 7.3-tonne, 8-wheeled XM157 Drake in 1956, which did succeed at reaching the prototype stage. It failed to reach production, however, as the army’s interest became focused entirely on the far larger LARC-LX for its amphibious heavy cargo needs. A 4-wheeled vehicle with a 54-tonne payload, it would go on to serve in the Vietnam War and stay in service until 2001.
Dimensions (L-W-H)15.3 x 4.4 x 3.94 meters

He is but he is not our only illustrator now. He illustrated our recent Abbot and Sturmtiger articles.
– TE Moderator

Where did the images go? Did the author of Half-Track: A History of American Semi-Tracked Vehicles have them taken done for copy-right?

Problems with IMGUR. We will get them back ASAP