Introduced in 1928, the Carden-Loyd Mark VI tankette was one of the most influential designs of its time, serving as an inspiration for the French Renault UE, the Polish TK3, the Japanese Type 94, the Italian CV series, the Soviet T-27 and the Czech Tančík vz.33. More famously, the British Universal Carrier was a direct evolution of this vehicle.
Its ridiculously cheap price and the Vickers company’s global reach meant that the Carden-Loyd became a success story on the international market, serving in many armies worldwide and becoming the most extensively used tank in the world for a few years in the late 20’s and early 30’s. This period, marked by the 1929 Stock Exchange Crash, meant that smaller nations with limited military budgets were able to purchase tanks to equip their armed forces. One of these clients was the landlocked South American country of Bolivia. 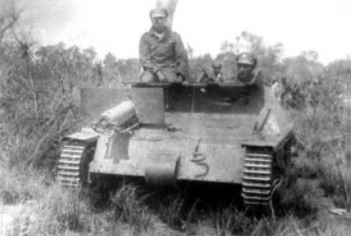 One of the Bolivian Carden-Loyds somewhere in the Chaco 1932-33. Photo: SOURCE

Bolivia’s reasons for wanting to purchase war materiel were the growing tensions with its neighbor Paraguay over the disputed Chaco region, territory claimed by both countries. In 1928, there had been border skirmishes, known as the Vanguardia Incident, but, with both sides recognizing neither was ready for a full-scale war, a peace settlement through the League of Nations was reached. Nevertheless, both nations remained bellicose and built up their forces in the region resulting in the outbreak of war in July 1932.
Acting upon the advice of Hans Kundt – a German who was Minister of Defense and Commander in Chief of the Bolivian forces and had who previously been a Lieutenant General in the German Army during WWI – a deal was sought with the British arms company Vickers to buy modern military equipment, aircraft and tanks. Originally, the contract valued at GB£3 million and was to include 12 tanks plus aircraft, though the financial crisis caused by the 1929 Stock Exchange Crash meant that a new, more austere deal had to be struck. In the end, this agreement, concluded in October 1932, was worth somewhere between GB£1.25 million and GB£1.87 million and included 196 artillery pieces, 36,000 rifles, 6,000 carbines, 750 machine-guns, 2.5 million rounds of ammunition, 10,000-20,000 shells, 12 warplanes and 5 tanks – 3 Mk. E’s and the 2 Vickers Carden-Loyd.
However, not all that was agreed to was sent and what was sent was of dubious quality. To make matters worse, Argentina and Chile, who supported Paraguay, blocked the shipments in their ports for some time.
On arrival, all tanks were then grouped together in the ‘Destacamento de Blindados’ under the command of a German mercenary, Major Adrim R. von Kries.

Scholarship on tank warfare of the Chaco War is limited and what has been written is prone to errors. Usually, no distinction is made between the tanks used and they are just referred to as ‘tanks’. Further complications arise as dates given are often contradictory.
The most widely accepted date for the Bolivia-Vickers contract is October 1932, however, several authors have claimed that the Carden-Loyds were first used at the Battle of Boquerón, in September 1932.
Unfortunately, no photographic evidence exists to clear up this discrepancy.
An explanation is as follows:
[Disclaimer: This is a speculative theory developed by the author.]:
What is known is that Bolivia and Vickers had been negotiating an arms sale since 1928, so it is possible that the October 1932 deal was only the final one and that in the previous years, other deals had been struck, including the purchase of the two Carden-Loyds. Since then, it may be the case that for the sake of simplicity, authors have amalgamated all the sales from Vickers to Bolivia in that final one. Other explanations are possible, including the alternative that they were indeed never sent until October 1932 and only first deployed at Nanawa in July 1933.
Whatever is the case, this article will continue based on the assumption that Bolivia had two Carden-Loyds ready to deploy in combat in the Chaco in September 1932, thus making them the first armed tracked vehicle to be deployed in the field of battle in South America.

The Bolivian Carden-Loyds were of the Mark VIb variant. The main export version had been the Mark VI with head covers, but the Bolivian VIb differed in that it had a slightly peaked transverse roof hinged fore and aft for overhead protection. It also differed in that it had two upper track rollers and had a Meadows 40HP engine with the conventional four speeds transmission.
Apart from that, it had the same features as most Mk.VI’s, including the dismountable machine-gun, two-man crew and armored front.

The Bolivian Carden-Loyd, Illustrated by Tank Enyclopedia’s own David Bocquelet

As stated previously, the Carden-Loyds allegedly made their combat debut for Bolivia at the Battle of Boquerón in September 1932, which was also the first battle of the Chaco War. One was used between the 24th and 25th in support of infantry units in the fight to defend the fort of Boquerón, which had been captured the previous week from Paraguayan forces. One of the tankettes was commanded by the American mercenary John Kenneth Lockhart, who was wounded in the battle. The vehicle’s poor frontal armor was unable to stop Paraguayan rifle and machine-gun fire, a problem aggravated by the fact that the high temperatures meant that some of the fighting was done with the hatches open, making it very dangerous for the two-man crew. The battle resulted in a major triumph for the Paraguayans and the Bolivians were forced to retreat.
The two Loyds would be used again in the next battle of the war, the Battle of Kilometer 7. One, commanded by the Bolivian Lieutenant José Quiroga, was used in early December to support the infantry in a counterattack to maintain the line.
Later in that battle, Bolivian forces had used a truce to retreat to the Kilometer 12 of the Saavedra-Alihuatá road. On the 27th, a major counterattack was planned by General Hans Kundt to exploit a Paraguayan defensive weakness, despite Air Force intelligence reports advising otherwise. One of the tankettes, commanded by the then recovered Lockhart, was used alongside the 3rd Infantry Regiment ‘Pérez’. The frontal assault on Paraguayan forces would be a disaster resulting in hundreds of Bolivian casualties. The Loyd’s role in the assault was minimal and due to the high temperatures inside the tank, it was forced to retreat. Its commander, Lockhart, not wanting to give up the fight, left the tank and continued to fight on foot, but, by the end of the day, he was another name on the Bolivian casualty list. 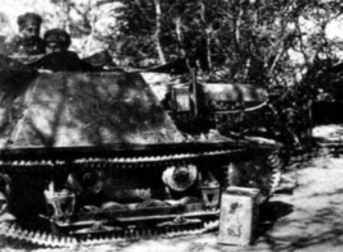 A side view of a Bolivian Carden-Loyd with its crewmembers. SOURCE:
The tanks would not be used again until the Second Battle of Nanawa in July 1933. Here they were used alongside the Vickers Mk.E’s. The Bolivian offensive was divided into three groups: north, center and south. The North group, under the Austrian Captain Walter Kohn, consisted of two Mk.E’s, whilst group South was led by Major Wilhelm ‘Wim’ Brandt and consisted of the other Type B plus the two Carden-Loyds.
The battle would be another disaster for the Bolivians, who lost 2,000 men. On the tank front, a Mk.E was lost and the two Loyds went out of action early in the battle; one was destroyed and the other got stuck in a trench.
Following the battle, the immobilized Carden-Loyd was recovered and redeployed during the later stages of fighting around Gondra in mid-August.
Following this, there is no recorded use of the vehicle and it was presumably destroyed there, or soon after that at Campo Grande.

The value of the Carden-Loyds during the Chaco War was minimal and should have been a forewarning of the serious failings of this type of tank as exemplified in the Spanish Civil War and early stages of World War II.
Often used as mobile machine-gun platforms, they suffered from poor armor, no proper tank doctrine and being used as individual infantry support vehicles, rather than a larger tank unit. Moreover, the heat in the region, rising to as high as 50ºC, made fighting difficult for several reasons. Tanks had to fight with open hatches creating vulnerable spots; the metallic body of the tank absorbed the heat and made it impossible to touch and machine-guns became jammed as cartridges expanded due to the heat. Neither was the low-lying, densely vegetated geography of the area conducive to tank warfare in general and especially the Loyds, which were unable to play to their strengths using their mobility to roam the battlefield exploiting weak points.

Brilliant article, it would be great to showcase your work on our up and coming community website?
Thanks Rob

Hi Rob, could you provide some details?
– TE Moderator

Thanks!
Could you provide some more details?
– Gareth (the author)

I love the articles about the lesser known African Countries’ tanks! please do more about them! – Evan

Thank you, Evan, but Bolivia is in South America.
– TE Moderator

Are there any projects or local (Latin American) modifications of tanks, tankers of the period 1920-1950. Not known to the general public?

There are a few, though these are a bit after the 1950’s period. The Argenitineans modified their Sherman’s and Crusader’s, having developed an indegenous tank in the early 40’s.
You also have the Tortuga Armored Car from Venezuela.
– Gareth (the author)

Bolivian Carden Lloyd mk.VIb were purchased in 1929. A purchase of 10 units was being negociated since 1928.

The remaining of this purchase order was abandoned in favor of the purchase of the Vickers Mk.E 6-ton light tanks, according to supreme , decree of November 7th, 1932

La Paz, november 7th, 1932
SEEN:
Offices 100/32, 101/32 and 104/32 from the War Office to the General Controller of the Republic
CONSIDERING:
That according to the indications of the General Staff, the acquisition of three war tanks is necessary for the National Defense
That the conditions of sale and the delivery time indicated by the Vickers house are convenient.
RESOLVES:
Authorize the General Controller of the Republic, to deliver to the order of the Legation of Bolivia in London the sum of sixteen thousand ninety-six pounds shillings, eight and eight shillings, four pence (L.16096.18.4)in order to complete the sum of twenty-eight thousand four hundred and thirty pounds (L. 28830) worth of the three war tanks, considering the use of remaning sum of twelve thousand three hundred thirty-three pounds, one shilling and eight pence (L.12 333.1. 8) from the purchase ten cars ‘Carden-Loyd’, which was to be built by the Vickers house for the Government of Bolivia.
Sign up and communicate
(Signed) D. Salamanca J.Espada

I just dont get this tank like the bickers mark VIB was in service already so?