War can stimulate the minds of the young and the old alike to develop weapons. Whilst the majority of would-be tank designers have finished their basic school education, it seems one precocious Australian schoolboy by the name of ‘G.Crowther’ saw his opportunity in 1945 to make his contribution. As such, he drafted up his own design for a ‘Land Fortress’ tank and posted it to the Army Inventions Directorate. 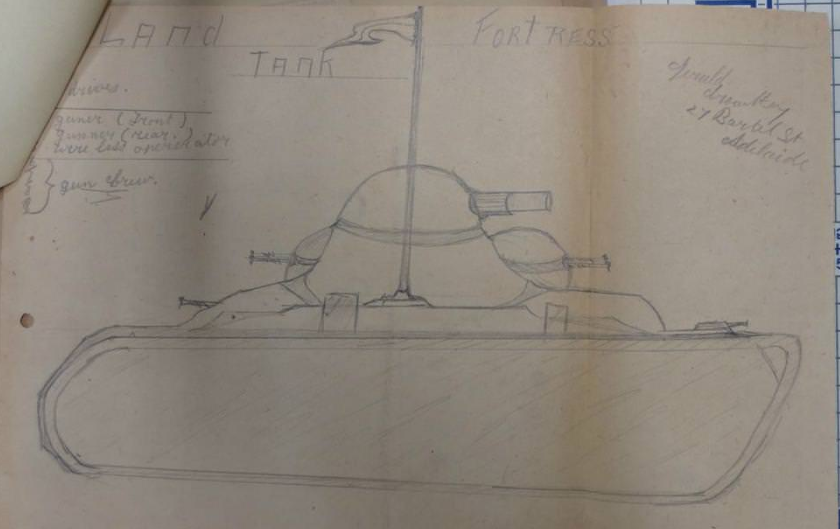 Crowther Land Fortress tank from the right-hand side. Photo: Author

Generally, tank designs that go by the name ‘land fortress’ or ‘land battleship’ etcetera are huge, impractical, and ill-conceived, even when designed by experienced engineers. Master (not Mister – ‘Master’ here, referring to a youth) Crowther, however, is an exception to this trend. His Land Fortress tank exhibits many interesting features, albeit relatively crudely drawn.
Sporting not two but three caterpillar tracks – the third caterpillar running directly down the middle of the vehicle – this offered the potential for improved off-road performance with a lower ground pressure compared to a design with just the traditional two tracks, although at a significant increase in weight and complexity. The engine and main fuel tanks were positioned at the front, between the driver and the front of the hull. A second emergency fuel tank lay at the rear, along with one on the bottom of the hull. Behind the driver was a small spherical turret for a gunner using machine-guns, and above this, the main turret which housed a 25-pounder gun. Behind that main turret was yet another turret fitted with twin machine-guns. All of the above was set within a highly curved smooth hull providing very clean lines over the body of the tank.
A final machine-gun position was set at the very rear, at the same level as the driver, but operated by a gunner and the final weapon, a flamethrower, was mounted on the front of the hull and was operated by the driver.
In total, Crowther’s design mounted no less than 6 machine guns, 1 flamethrower, and one 25-pounder main gun. With multiple turrets and a very high track design, the vehicle is more emblematic of the inter-war era than the end of World War 2. For a tank of 1945 though, it was unsuitable and brought forth no new ideas about tank design to the Australian Army. Perhaps the most overlooked part of the design though is the choice of a third track. This was not new, the firm of William Foster and Co. of Lincoln had designed ‘belly tracks’ back in WW1 for the same lower ground pressure reason. The addition of tracks under the hull obviously provided more bearing surface on which the weight of the machine was spread out and also reduced the chance of ‘bellying-out’ when crossing obstacles.
It seems extremely improbable that a schoolboy in Australia back in 1945 would have had an in-depth knowledge of experimental tank designs in Great Britain from World War 1, so it is interesting to note that he seems to have developed this idea independently. 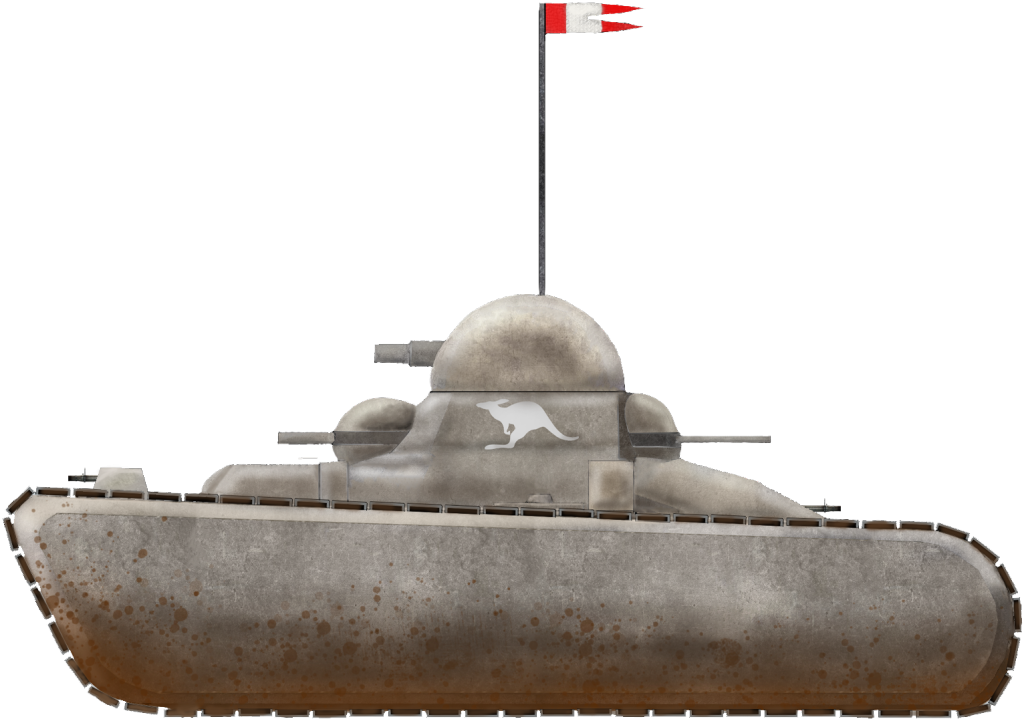 The June 1945 report into Crowther’s design suggestion was short but was not as dismissive as perhaps a first glance might have suggested. There were some good features to it for crew protection, such as the forward mounted engine and the extremely well-sloped body and turrets, which were obviously well designed to deflect shots too. The era of the multi-turret tank was well over by 1945 and the choice of the powerful but low velocity 25-pounder gun for the main armament was not going to be suitable for a main gun in the post-war era.
The report, perhaps a little gently due to the age of the designer, ended saying:

“whether or not there would be anything of value in this idea is difficult to say. Perhaps one of these days streamlined tanks will be the vogue and the design outlined may then be approached”

Master Crowther was thanked for his idea, the paperwork was filed and quietly forgotten. No examples of this Land Fortress Tank were ever built and the youthful designer likely went back to his studies. It is not known what became of him.

it look like some student was bored at school

i have actually done that in the middle of math class.