The situation in 1915 – 1916 was dire, as Germany, Britain and France had settled into a stalemate. In order to solve the ‘bloody equation’ formed by the artillery-barbed wire-machine gun combination, both Britain and France began development on a vehicle that had the ability to cross trenches with ease and be able to withstand enemy machine gun fire. This tracked vehicle would eventually revolutionise the battlefield. Thus the tank was born.
Although the tanks suffered from mechanical failures and inadequate crew training they had a major physiological impact on the German soldiers. German intelligence subsequently submitted reports to the Oberste Heeresleitung (German supreme command or OHL for short), which then lobbied the war ministry for an equivalent. However, some of the senior officers of the time were more focused on artillery and infantry tactics rather than the development of the tank or similar armored vehicles. 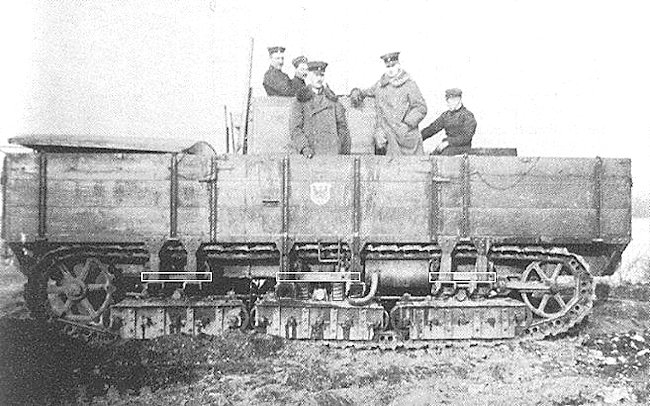 The committee, headed by chief designer Joseph Vollmer, rejected the trench crossing rhomboid shape track system as used on the British tanks because they wanted to build a chassis that could be used on a tank and a ‘prime mover’ heavy artillery gun tractor. This approach lead to problems.
Two Caterpillar-Holt tractors were obtained and adapted to build a working prototype. It had a better speed than the very slow British tanks but its trench crossing abilities were not as good.

Eventually, the Heeresleitung got some funding from the war ministry to make an equivalent. After months of testing and building, they came up with the
A7V. The OHL ordered 100 chassis to be built. The rest were used to develop several A7V variants including the Überlandwagen and an Anti Aircraft version, called the Flakpanzer A7V.

Germany only produced 20 A7V tanks in World War One. Britain and France built over 8,000 tanks between 1916 – 1918. In the battles of 1918 the German Army used more captured British tanks than they did tanks built in Germany.
The Germans were not very imaginative when they gave a name to their first tank. The letters A7V stand for the committee of the Abteilung 7 Verkehrswesen (Department 7, Transport) of the Prussian War Office.

The need for a tracked supply vehicle

The battlefield conditions during World War One were horrendous. The muddy, crater filled terrain proved too difficult and at times dangerous for both men and animals carrying supplies being moved to the front. The German Army felt a need to come up with a way of moving these vital supplies quickly but also safely.

In February 1918 the initial modified order for 100 A7V tanks was changed to just 20 finished units. The remaining A7V production chassis was diverted into making prime movers, tracked supply vehicles that could also tow guns and other broken down tanks, and anti aircraft vehicles.
The ‘prime mover’ supply vehicle based on the A7V chassis had a number of different names. The Germans made distinctions between Strassenwagen = Road vehicle. This vehicle crossed rough undulating ground and was called three different names A7V Geländewagen (Terrain vehicle), A7V Rauoenlastwagen (Caterpillar vehicle) and A7V Überlandwagen (Overland Vehicle).

The first eight A7V Geländewagen vehicles (chassis numbers 508 – 515) were completed by September 1917. In November 1917 they were in use with the German Armee Kraftwagen Kolonne (Raupe) III – AKK(R)111 (111th Tracked Army Motor Vehicle Column) in Northern France. By September of 1918 thirty were in services, with the AKK(R)111 and the AKK(R)1122 Army transport columns.

The A7V Überlandwagen’s carrying capacity was approximately 3 – 4 tons (2.7 – 3.6 tonnes). Although it was able to deal with the muddy terrain, it had limited success due its slow speed, poor rough terrain handling and lack of protection for the crew. 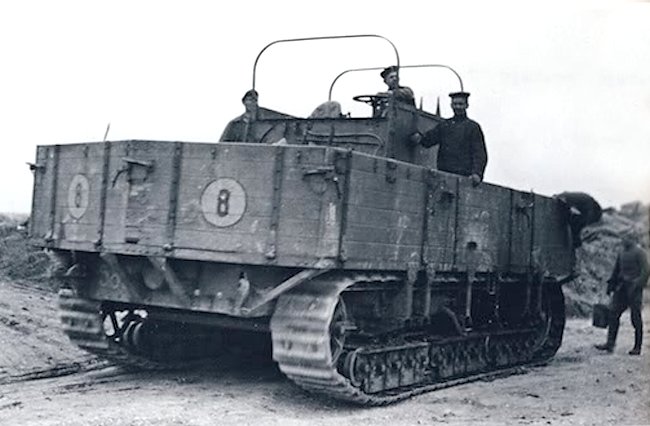 The vehicle chassis number was painted on the right hand side at the front just under the over hanging cargo compartment. Only the number 5 can be clearly seen. This vehicle has a no drivers compartment canopy just wire rails on which a bad weather tarpaulin could be thrown over. It has the taller wooden side panels. The number 8 on a light background in a bordered circle may be the tactical symbol of the German Armee Kraftwagen Kolonne (Raupe) II22 – AKK(R)1122.

Those that did make trips to the front were well received by the soldiers, as the supplies that the Überlandwagen brought intact to the frontline were vital to the men. These supplies would range from clothes to medicine to munitions and at times food. The fate of these A7V Überlandwagens after World War One is unknown, it is possible that they were used sometime afterwards before being broken up and scrapped.

The twin Daimler 100hp engines were mounted side by side in the centre with the driving compartment, arranged for drive in either direction, placed on a platform above the engines. The driver did not have an armoured cab. The seats in the control position swivelled and the controls were duplicated for driving in either direction without the need for turning the vehicle around.

There was a canopy above the driver’s head. In some vehicles rails were added to support a tarpaulin cover over the load spaces. These rails went from the top of the canopy down to the four corners of the vehicle.

The walls of the driver’s cab were only about 2ft (0.6m) tall. He had four large open window that had no glass. In bad weather canvas sheeting was unrolled from the top of the canopy and secured to the bottom of the window opening to give the driver and crew some protection from the elements. The driver and the crew were very vulnerable.

This A7V Überlandwagen supply vehicle has a straight end not a boat shaped bow and is not fitted with a cover for the driver.
Unlike the British that used armoured tanks as supply vehicles that could travel right up to the front line under enemy fire, the German A7V Überlandwagen supply vehicles had to stay out of range of Allied rifles and machine guns.
The suspension was derived from the Holt tractor suspension, the American tractor which had also provided the early inspiration for British and French tanks. The A7V-Uberlandwagen had a front and a rear cargo bay, with wooden panels on the side. Later versions had taller panels. For ease of loading and unloading the wooden panels could be unhitched and swing down on their hinges.

Two tow hooks were fitted to the front and back. These were used to tow wheeled vehicles and guns. They were also intended to be used to help tow broken down, knocked out or stuck in the mud German, British or French tanks back to safety. 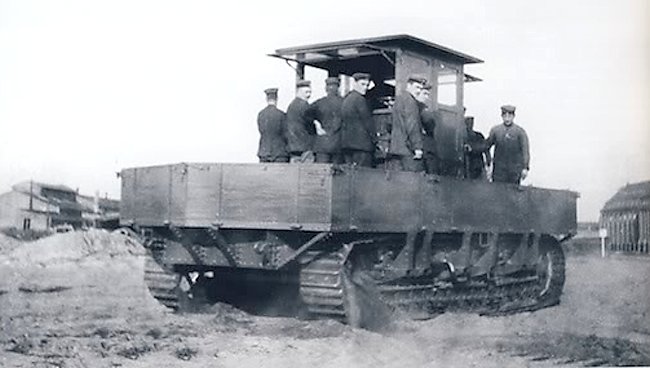 Proving ground adjacent to the Damiler Plant near Berlin. This vehicle was used to train drivers and mechanics of the German Armee Kraftwagen Kolonne (Raupe) III – AKK(R)111. The side walls on this vehicle are of the short variety.

Early reports were favourable but the A7V Überlandwagens suffered from the same mechanical and design problems as the A7V tanks: they had poor cross country performance and low ground clearance. Radiators and backboards were damaged if the load that was being carried was not sufficiently tied down. When the vehicle traversed very undulating ground the heavy load would slide around at fast speeds and hit the sides of the cargo areas causing damage.
The front and back of the cargo area extended past the tracks. This was problematic if the vehicle happened to descend into a big shell crater or trench. The nose of the vehicle got stuck in the mud wall on the other side of the depression. The tracks could not get a proper grip to drive up the wall. This was a design fault.

Fuel consumption was another big issue, especially in 1918 when fuel supplies were low. The A7V Überlandwagen required 10 litres of petrol/gasoline to travel one km. A wheeled truck only required 3 litres of fuel to cover the same distance. As a result they were not heavily used. 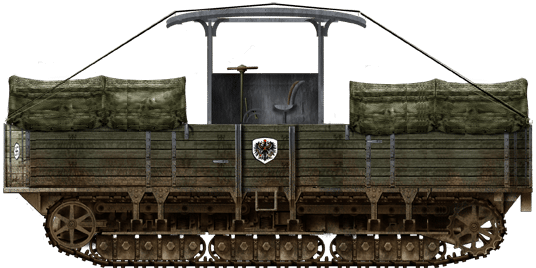 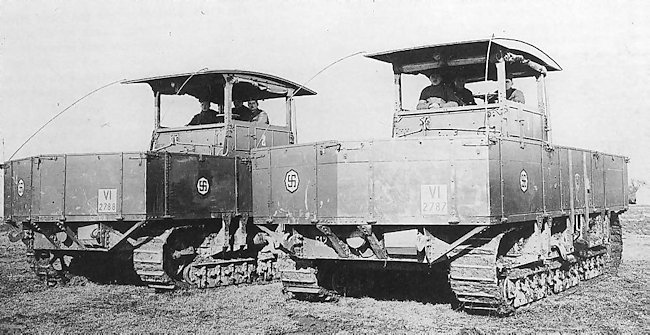 You can clearly see the bad weather tarpaulin window covers rolled up just under the roof of the driver’s canopy in this photo and the wire cargo compartment cover rails which go from the top of the canopy down to the four corners of the vehicle. 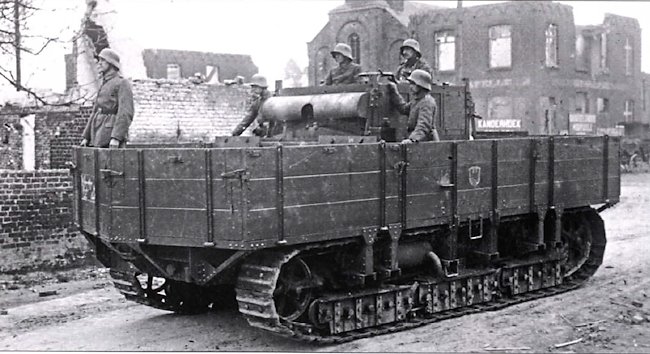 The driver’s canopy and cargo cover rails are missing from this vehicle. Also the crew are formally dressed suggesting that this vehicle is being used for driver training. 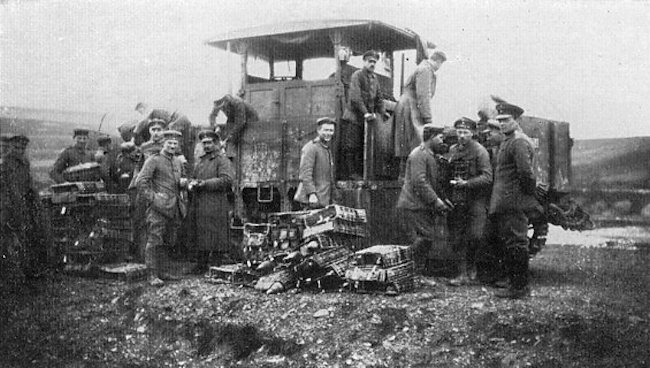 Ammunition being unloaded from an Überlandwagen A7V near the front line. 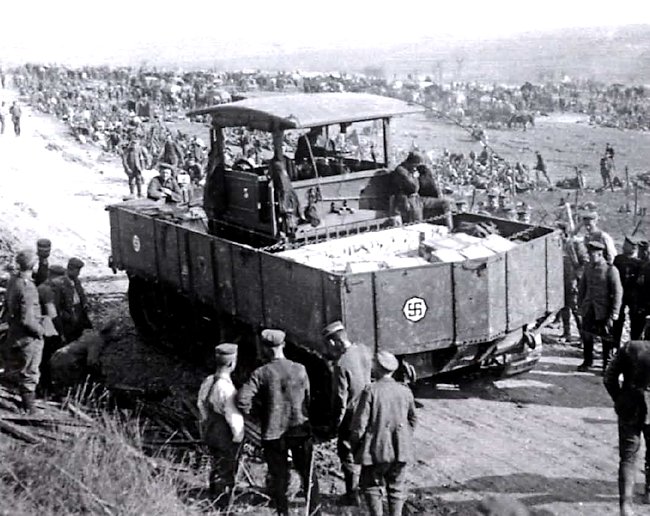 Fully loaded Überlandwagen A7V taking supplies up to the front on a sunny day in Northern France. The AKK(R) 111 unit swastika tactical symbol is painted on the front and the sides of the vehicle.

An Überlandwagen A7V belonging to the AKK(R) 111 crossing a small trench during driver training.

A pair of A7V Gelandewagens in service with the AKK(R) 111 believed on a training run and no load is being carried. The swastika sign in a white octagon insignia was the AKK(R) 111 tactical symbol. (photo NARA) 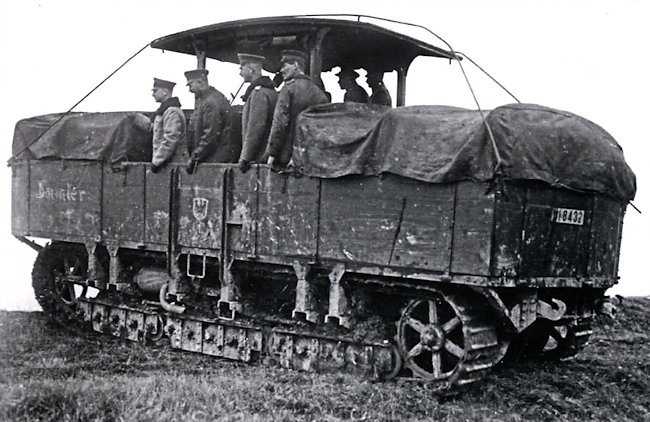 An A7V Gelandewagen prime movers function was to bring supplies to frontline troops over rough terrain. In this photo senior German officers were being shown what it could do with a full load. (Photo NARA) 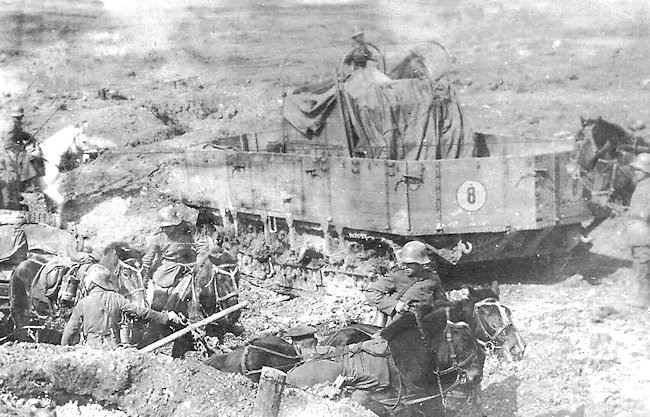 This image has nice symbolism with a team of horses in the trench below the Überlandwagen A7V: the new and the old. The old was still needed. The Germans used 1.8 million horses in WW1 and 2.7 million in WW2 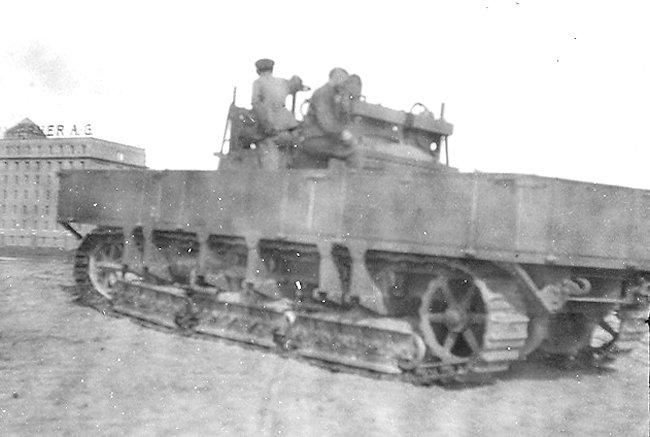 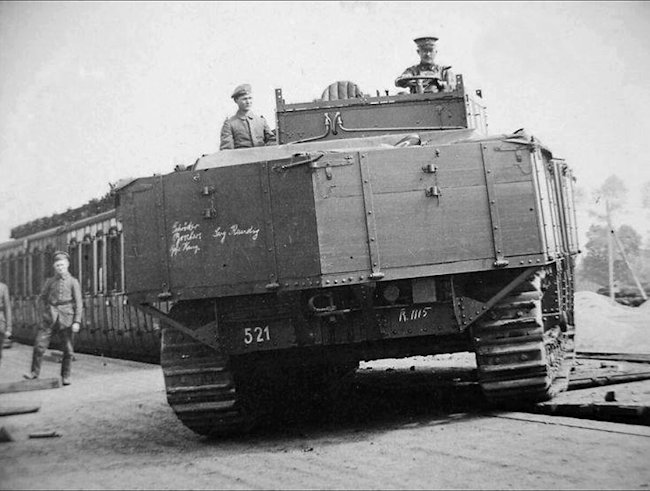 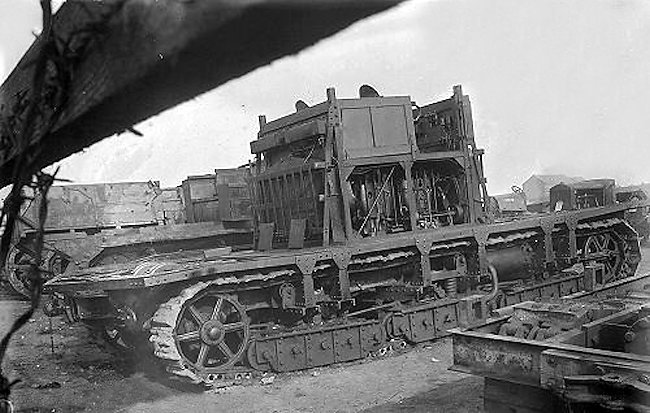 Überlandwagen A7V waiting to be scrapped. It is believed that this photograph was taken in the early 1920s, in Aldershot, England. Several of these machines were taken for examination & testing. A fully loaded Überlandwagen A7V moves off the road onto a muddy field. This is what the vehicle was designed for.

The bottom photo was taken in the early 1920s, in England. Several of these machines were taken for examination & testing.

Thanks Adam for the update