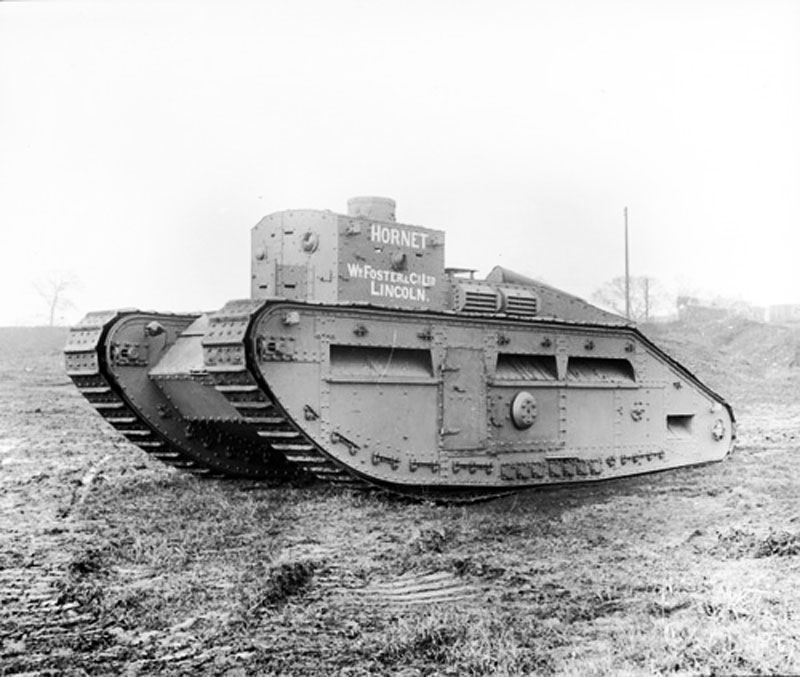 An even better Whippet

Sir William Tritton had designed the original ‘Chaser’ tank; the Medium Mark A popularly known as the Whippet. Tritton had personally visited the Western Front in 1917 to speak with crew of his tanks and get their reflection and suggestions. He also got a first-hand chance to see the terrain over which his tanks were being used and this left a deep impression on his mind.
The original Whippet, the Medium Mark A, even before production was complete was being seen as needing replacement. A follow-on design to incorporate the feedback from the troops and the requirements of the War Office. The two prospective replacements for the Whippet were semi-rival designs in this regard and were the Medium Mark B which was the design on Major Walter Wilson and the Medium Mark C designed by the designer of the Medium Mark A, Sir William Tritton.
Wilson had already started on his ‘B’ design and as a result, Tritton from the firm of William Foster and Co. with his chief engineer, William Rigby started to put together the ‘C’ design following a request by Admiral Moore on 3rd January 1918. Drawings were ready by 14th February and these were accepted as a design by the War Office on 19th April 1918. Construction then began on a prototype which was ready in the August of that year. Despite having started design and construction after Wilson, Tritton’s machine was ready one month prior to Wilson’s and was nicknamed ‘HORNET’ at some point. Quite why the military authorised two replacement designs to go ahead is unclear as is the switch from a fast hunting dog to a stinging insect for the name inspiration although a large aggressive insect with a very unpleasant sting certainly fits the bill for the role. It is possible the intention was to produce both in order to compare them for performance and order the better of the two or it could just be indecision or desperation to make sure they got one functional design.
The Medium Mark C was a large tank, completely unlike the Whippet it was to replace, she was actually larger and taller than the Mk.V and 2 tons heavier than the Medium Mark B of Major Wilson.
Centennial WW1 POSTER

The distinguishing features of the Medium Mark C are the very large box structure at the front which housed the commander and two machine gunners and the driver. Despite the lack of a turret the commander was equipped with a fully rotating cupola for improvised vision and a map table to assist in navigation. No radio was fitted but semaphore was provided for and the crew could communicate by means of speaking tubes. Previous tank designs suffered from terrible ventilation in particular of engine fumes and carbon monoxide from guns. The Medium Mark C separated the crew from the engine fumes with the bulkhead and large fans were also fitted to provide fresh air for the crew compartment although in event of a gas attack etc. the crew would have to resort to gas masks. Other innovations for the Mark C included the ability to add sulphonic acid to the exhaust to create a smokescreen just like the Medium Mark B. For The driver though was located centrally and was provided with a large flap which could be raised for better visibility when driving in a non combat area or road march while the rest of the crew used any of the 11 view ports provided around the tank. In keeping with the design of the Medium Mark A the Mark C used 7 Timken bearings on the main roller bearings which took the greatest load and non-timken bearing rollers fore and aft of these. 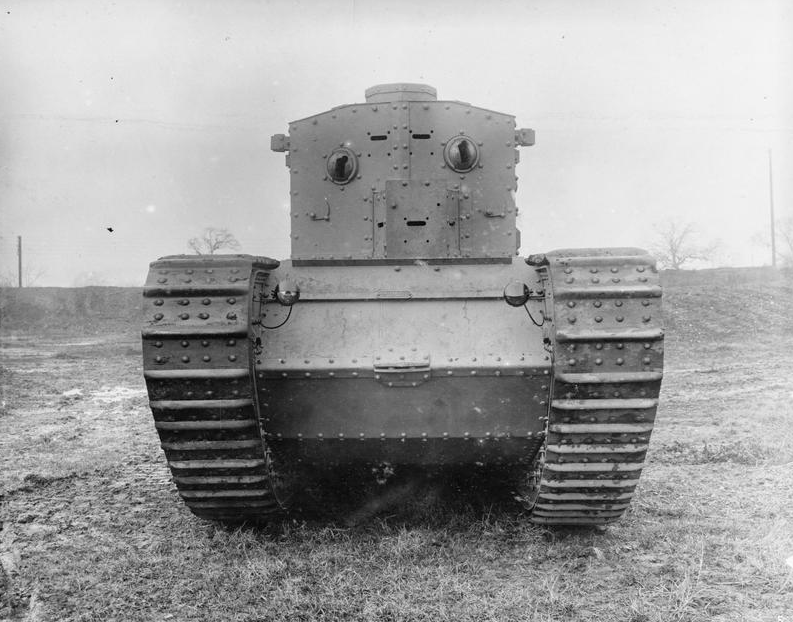 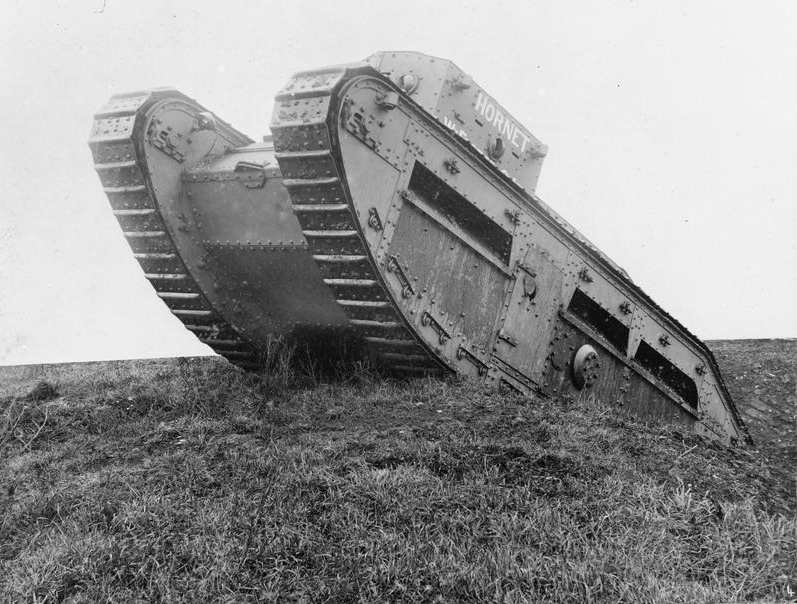 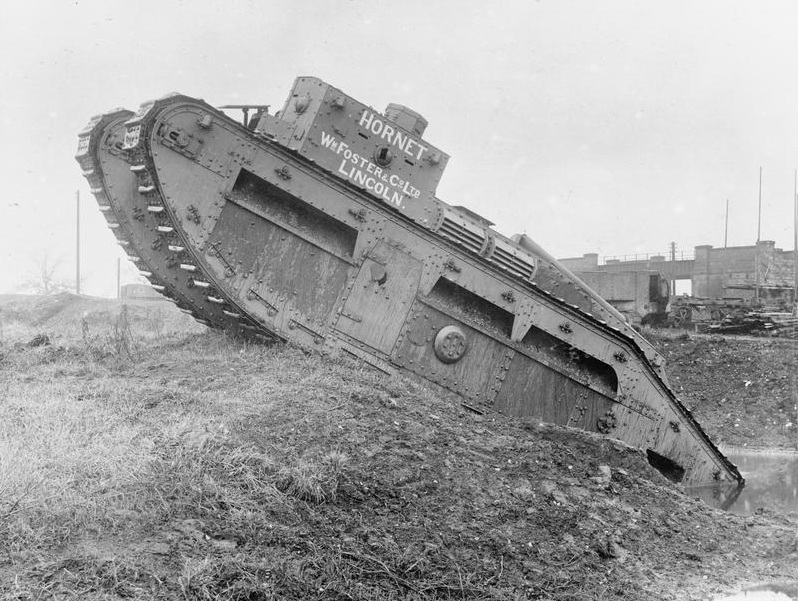 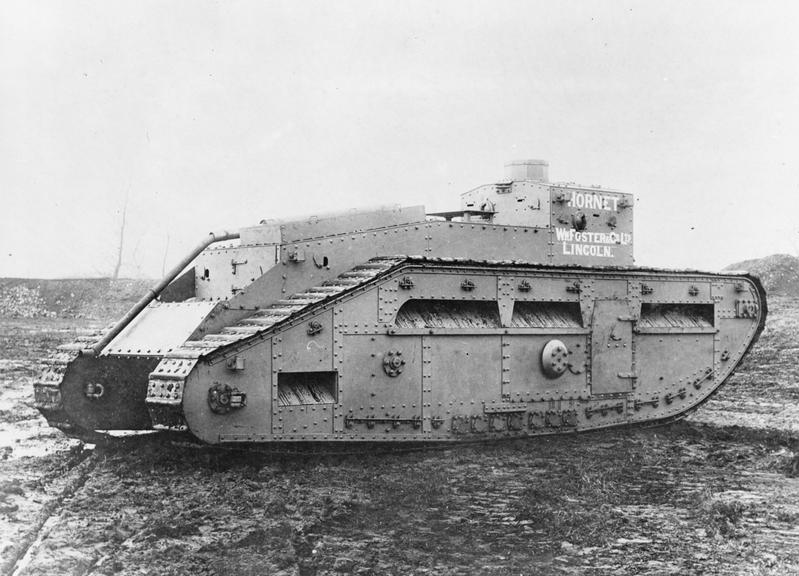 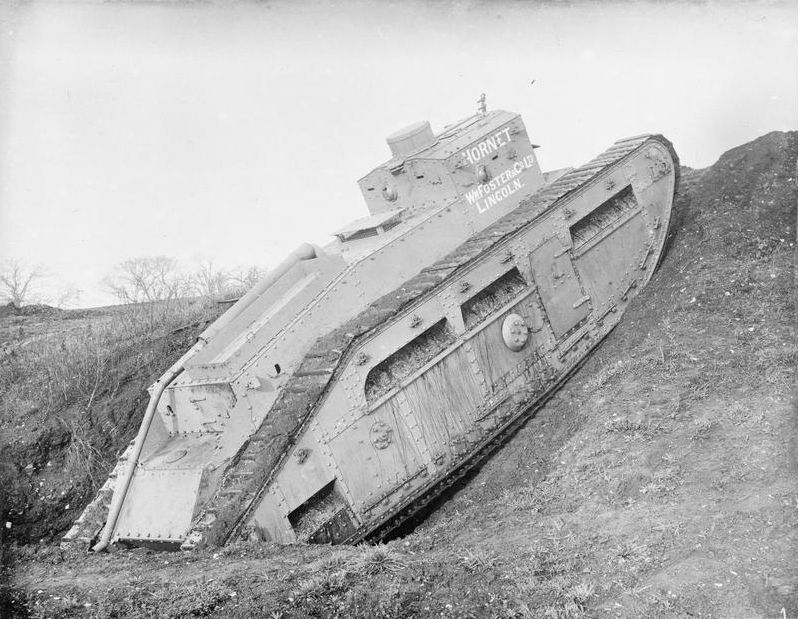 Medium Mark C Hornet during trials probably on the William Foster test field in Lincoln. Little Willie can be seen in the background of one of the shots
Consideration was given to creating both a Male and a Female version of the Medium Mark C just like there had been for the Medium Mark B. The Medium Mark C Male planned to have a single 6 pounder L/40 gun facing forwards and the female just machine guns with provisional plans for the production of 4000 female and 200 male tanks in case the war had continued into 1919. The new tanks required by the War Office were to be medium tanks though which meant machine guns only. So, in the end, no ‘male’ or ‘female’ versions were made and the Hornet was just armed with 4 Hotchkiss machine guns. 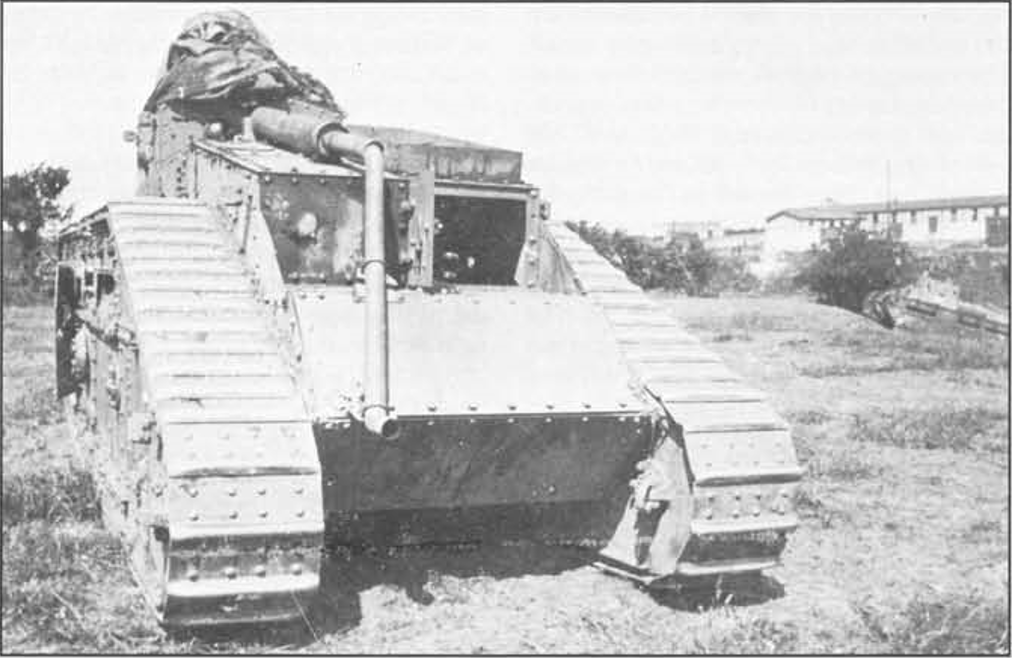 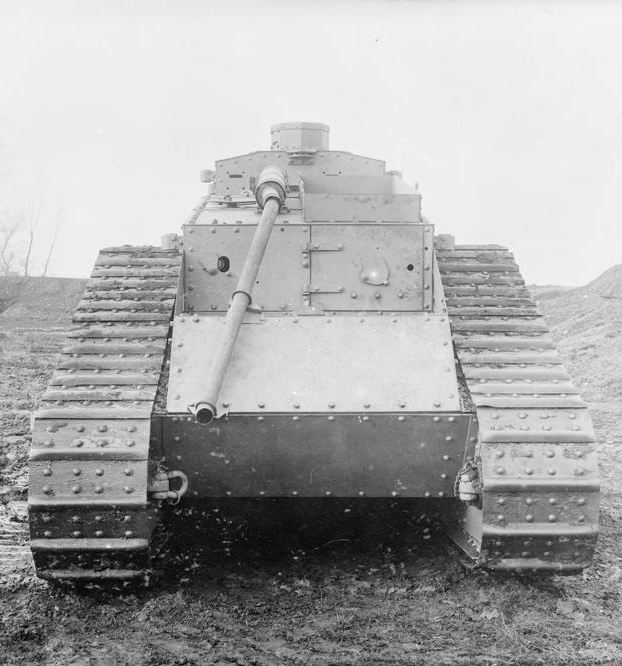 Rear view of a Medium Mark C rear door which is open and the rear machine gun position (to the left of the exhaust pipe)
Unlike the Medium Mark B of Major Wilson which was suffered from production delays the Medium C ‘Hornet’ prototype had been completed on schedule and subsequently received a production order for 200 machines (later increased to 600). By the time of the Armistice in November 1918 though no vehicles had actually been completed. 36 machines which were in various stages of construction though were finished and delivered to the 2nd Battalion, Tank Corps. A further 14 vehicles were constructed from the spare parts and materials which had been assembled for production. The remaining balance on the order was cancelled and no more Mark C’s were to be made. 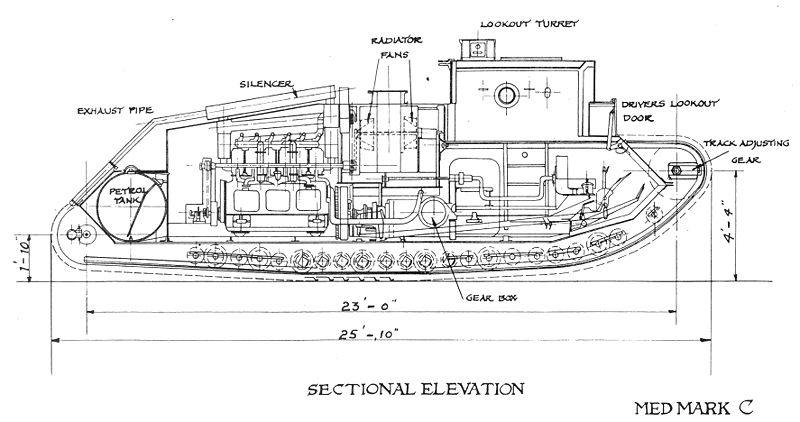 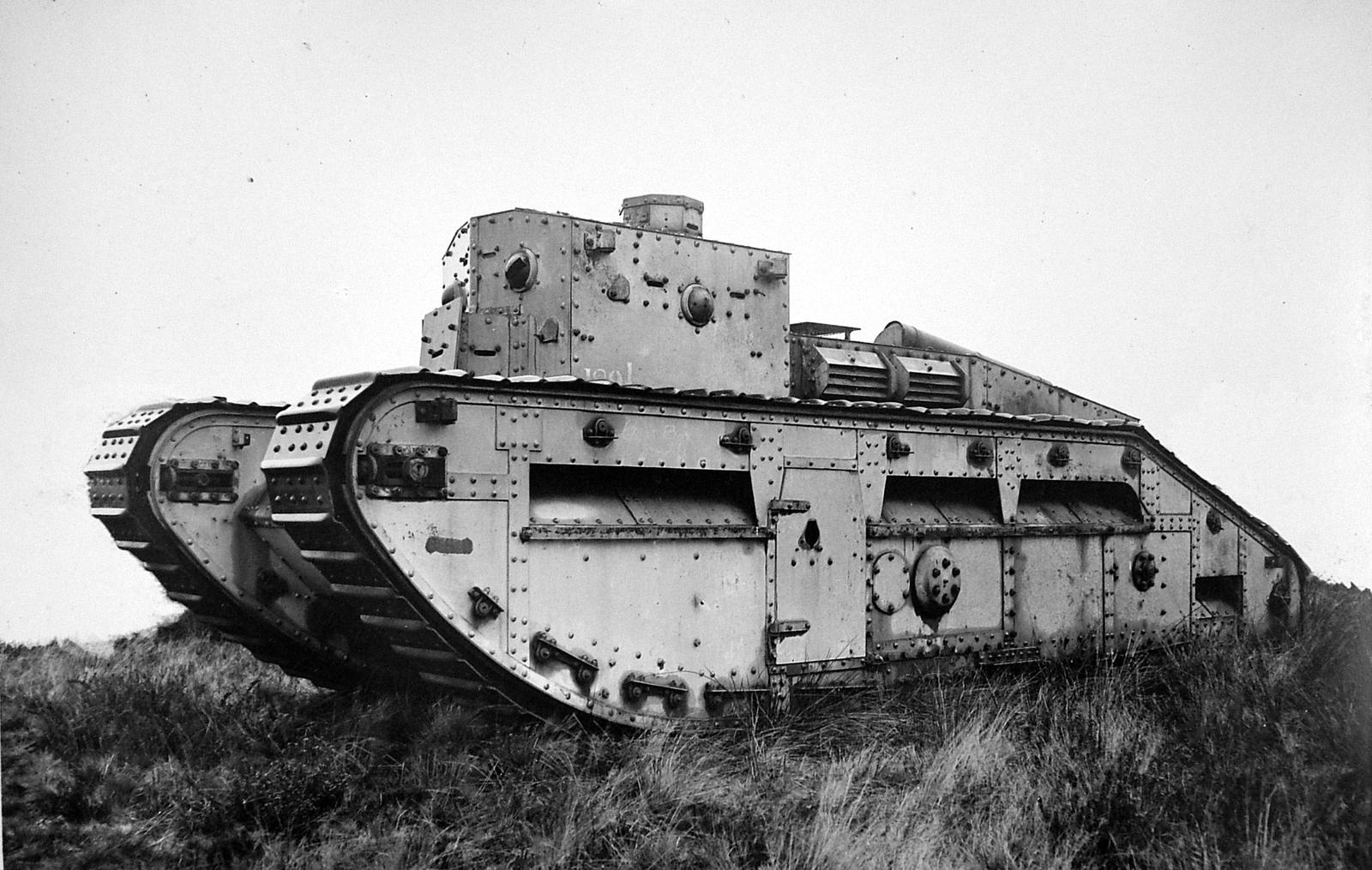 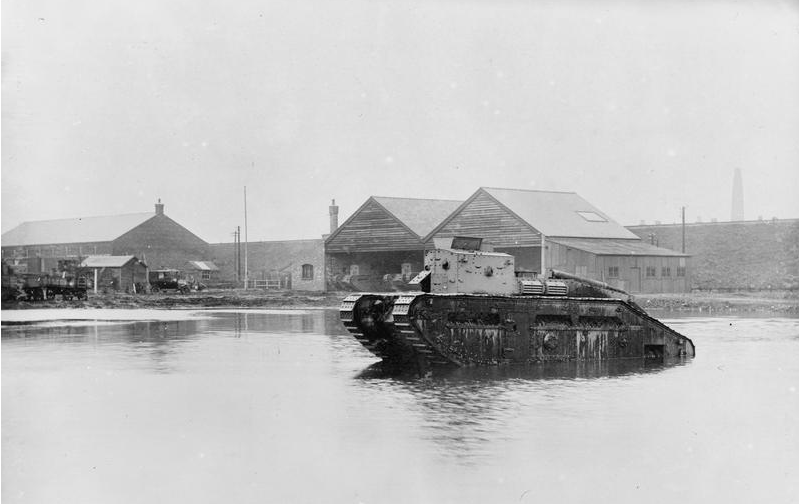 Hornet on trial in test ground of William Foster and Co. Ltd. The state of the ground is obvious from the amount of mud all over the hull. More vehicles can be seen in  the sheds in the background. Photo: IWM

Early in 1917 following problems with engine deliveries Colonel Albert Stern had engaged Harry Ricardo to develop a tank engine capable of 150hp, using no scarce metals like aluminium (which was prioritised at the time for aircraft production) and could run at sharp angles of tilt (35 degrees) for up to 100 hours on low grade petrol. The engine had to be compact but the design of the tank allowed for a wider and much taller engine than before. This allowed Ricardo to develop a rather tall 6 cylinder engine with long stroke pistons. Once completed this engine could actually produce 165hp at maximum speed (1200rpm) which allowed for a 10% overload on the engine for short periods without damage.

Stern ordered 700 of these engines from 5 separate engine makers immediately for the tanks like the Hornet which weren’t even in the design stage at the time. Stern felt that this step in ordering engines for tanks as soon as possible would remove the problems of supply which were holding back tank production. The British War Office however, was decidedly unimpressed with such foresight, production management and strategic thinking, and ordered Stern’s bosses at the Ministry of Munitions to cancel this ‘wasteful’ order forthwith. Stern therefore doubled the order to 1400 engines. This was the character of that man. The engine bay in the Mark C was large, large enough to fit this engine and like Major Wilson’s tank had also learned the lesson of isolating the crew from the engine by means of a firewall.
The Oldbury trials of March 1917 had showed the value of the epicyclic gearbox which further developed by Major Wilson would find much tank use in later years. These engines and gearboxes were to find their way into the Mark V in July 1917 and prospectively for the VI heavy tank but no orders for the Mark V were placed until November that year. When the engine was finally made though more aluminium was allowed to be used in the manufacture permitting the engine to be lighter than originally thought.

The Medium Mark C Hornet, was a better tank overall than the Medium Mark B, but unlike the Mark B she was neither sold nor deployed outside of Great Britain. 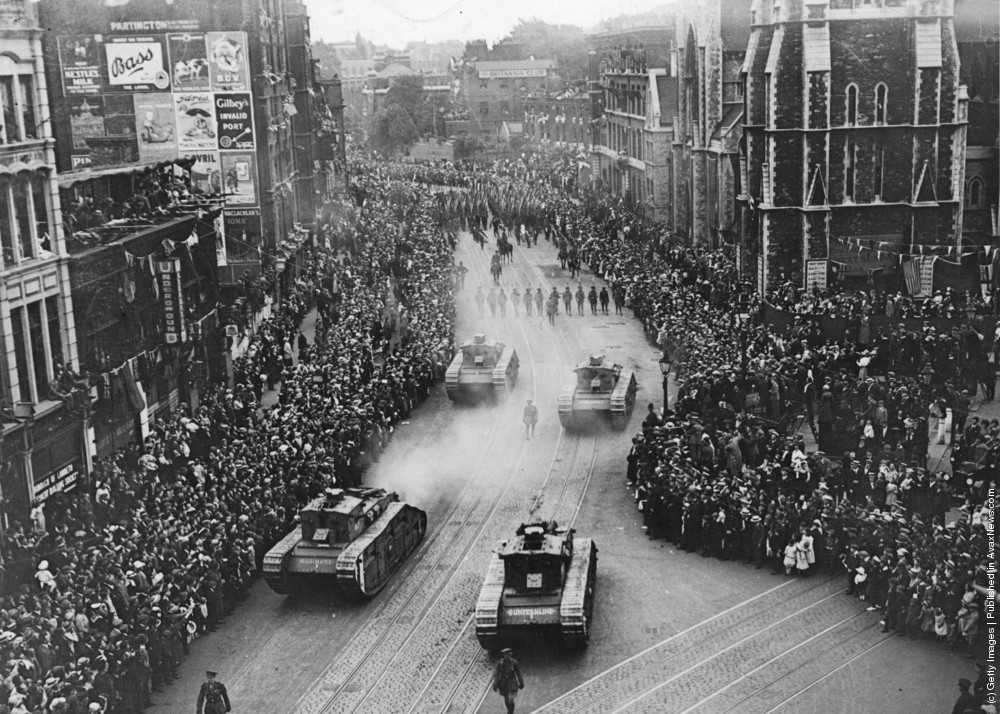 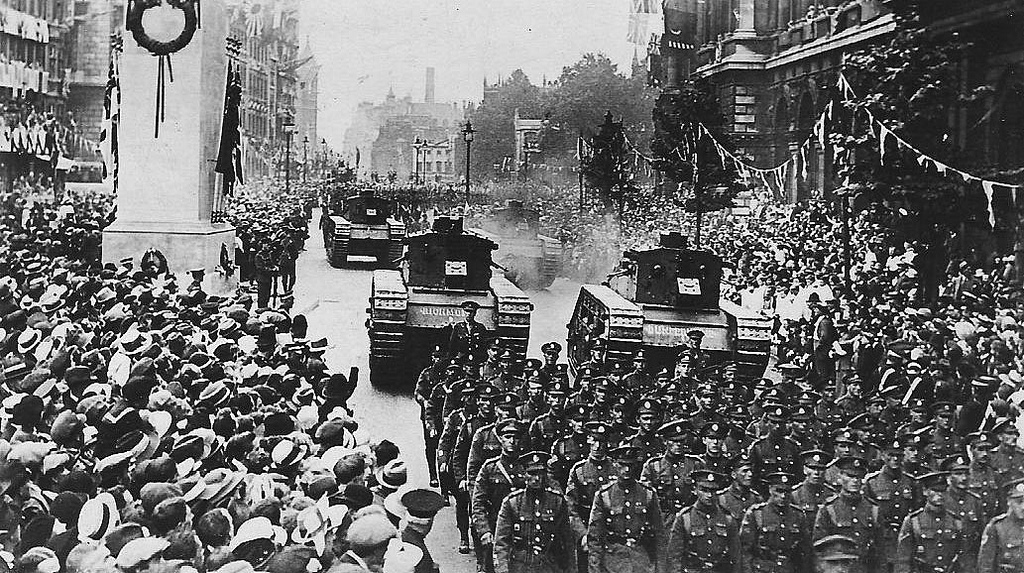 Medium Mark C’s during the 1919 Victory Parade, London
The Medium Mark C’s made an appearance at the Victory parade in London in July 1919 and a single vehicle was modified with wire handrails to form an unforgettable and rather hazardous amusement ride for visitors at Bovington Camp in July 1921. 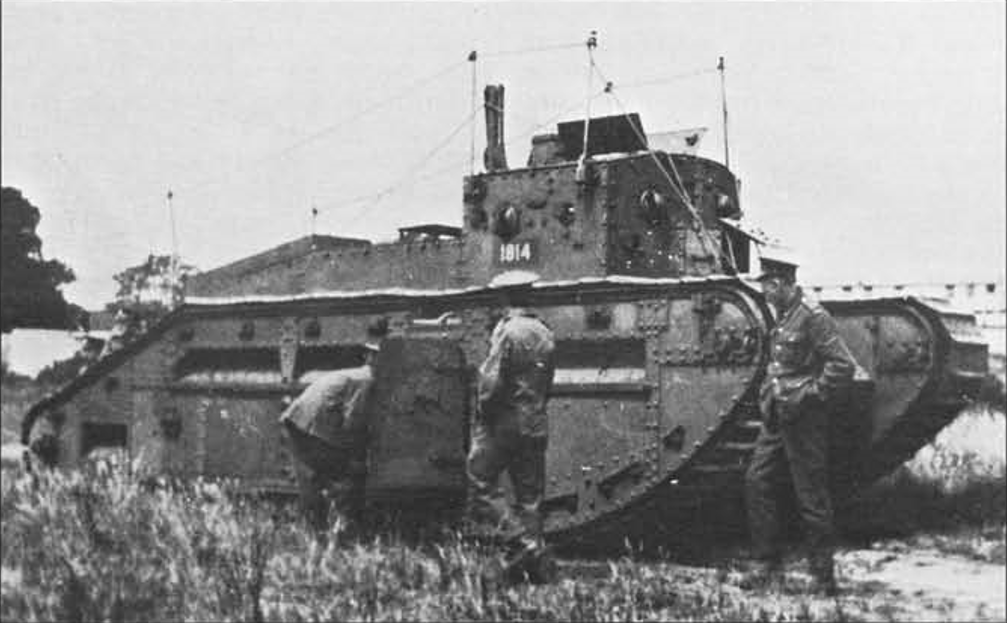 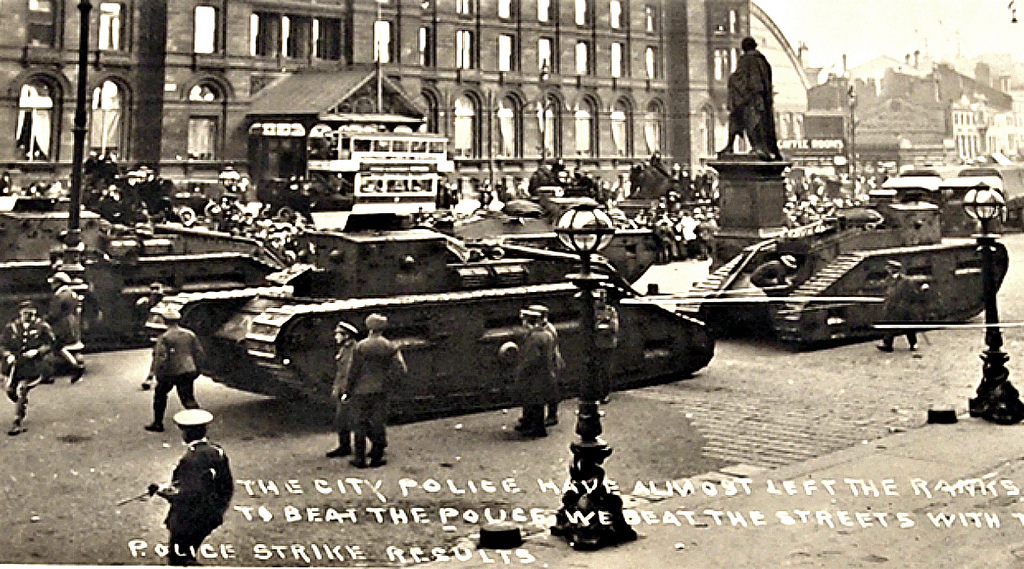 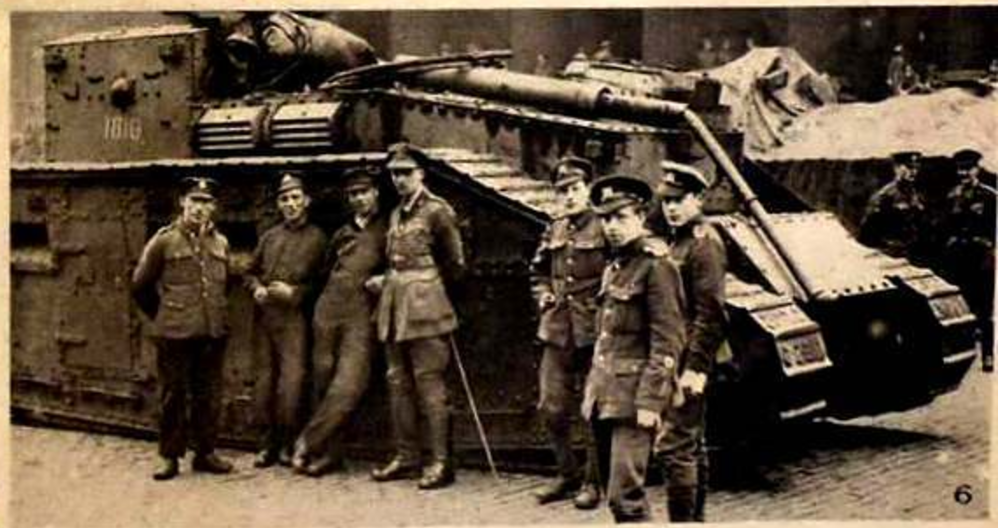 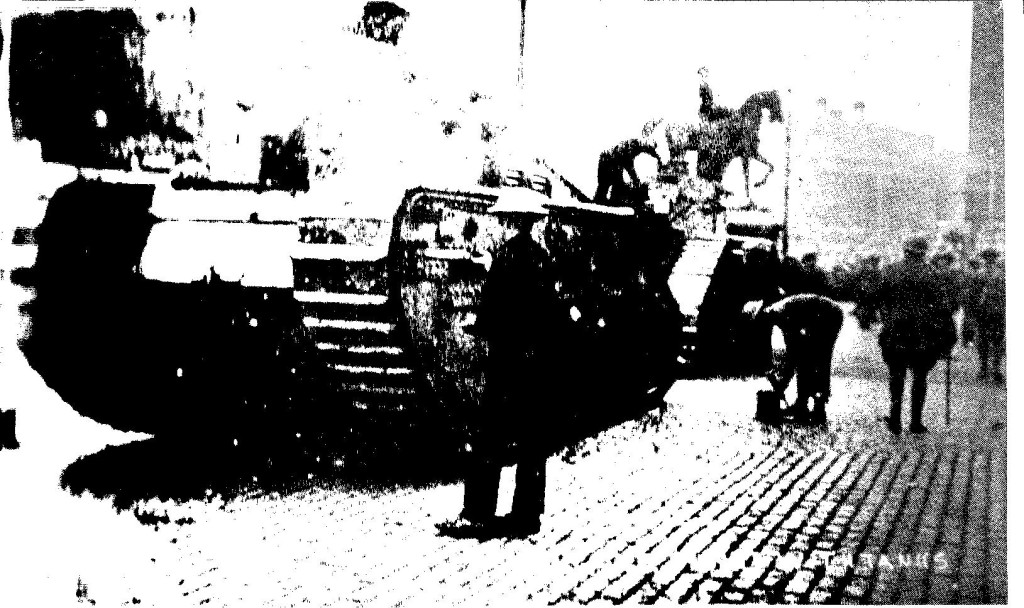 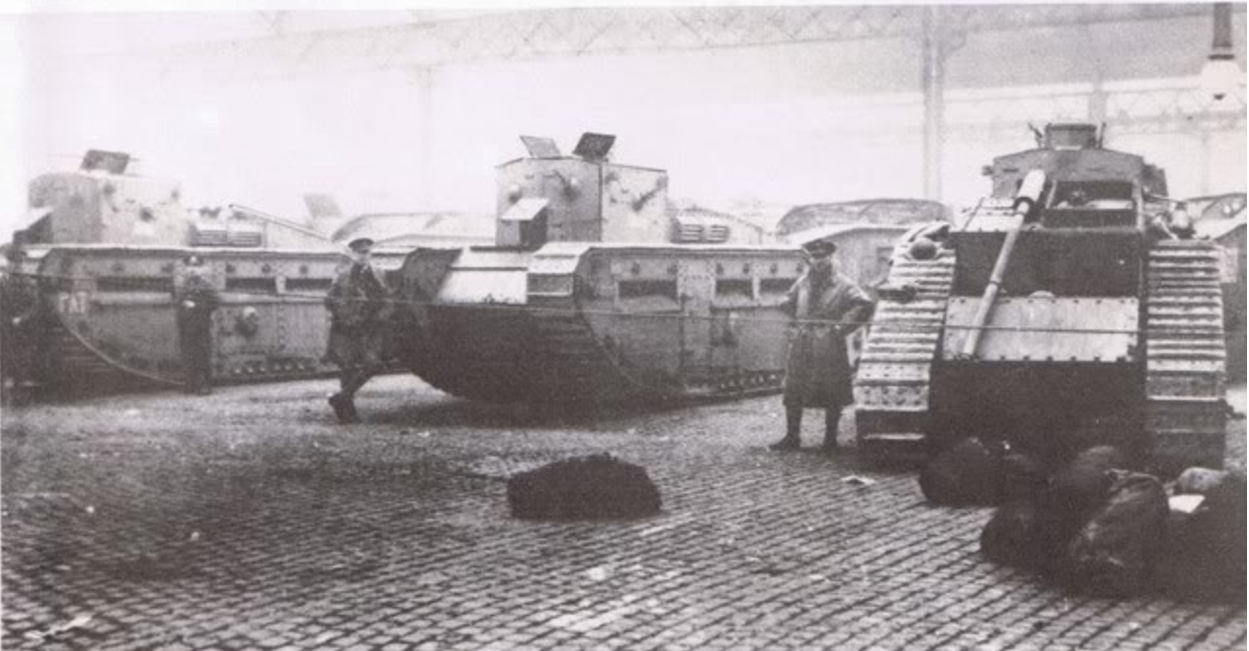 Medium Mark C’s deployed the Glasgow in 1919 and stationed in the Salt Market (the city’s cattle market)
The only action the Medium C ever saw was a brief deployment of approximately 6 tanks of which at least 3 were Medium Mark C’s to Glasgow in January to March 1919 after a period of civil unrest but were withdrawn without a shot fired. Likewise to quell a public disorder at least 4 tanks were deployed to the streets of Liverpool in August 1919 but again left within firing a shot. One vehicle was put on outdoor display at the Imperial War Museum at the Crystal Palace, London between 1920 and 1924 before she was towed to Cricklewood for breaking. 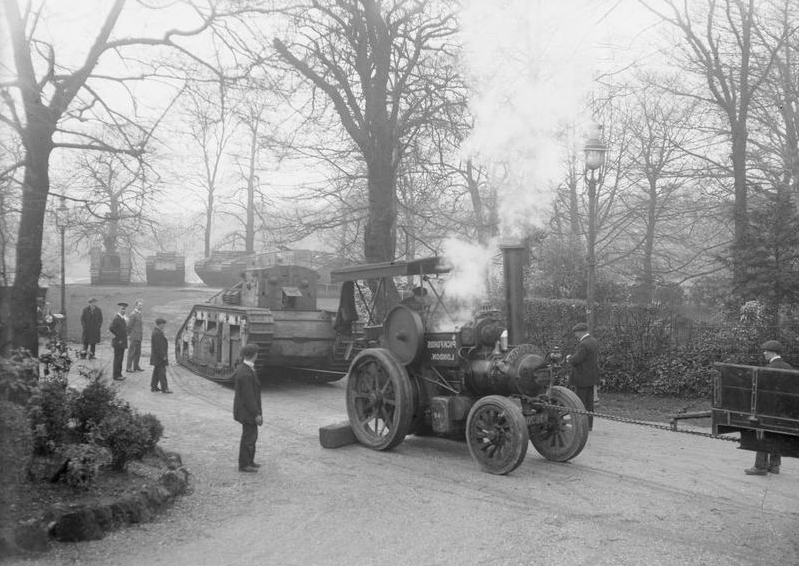 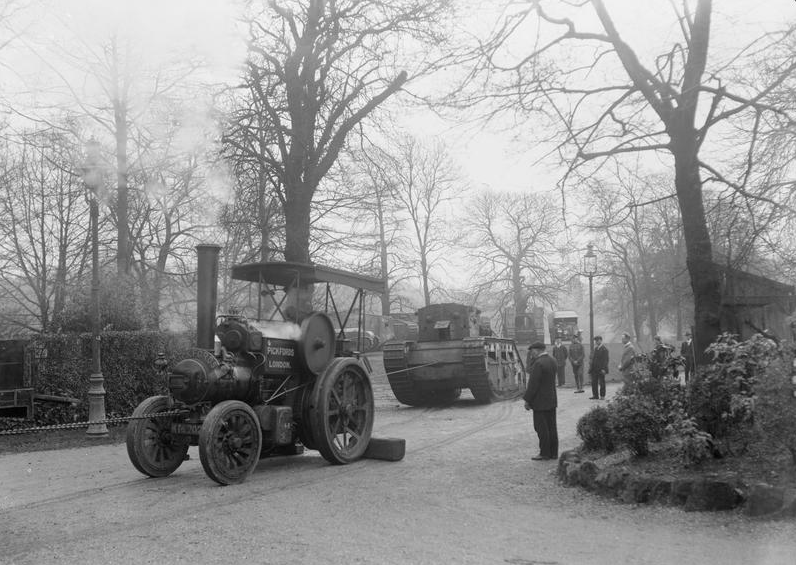 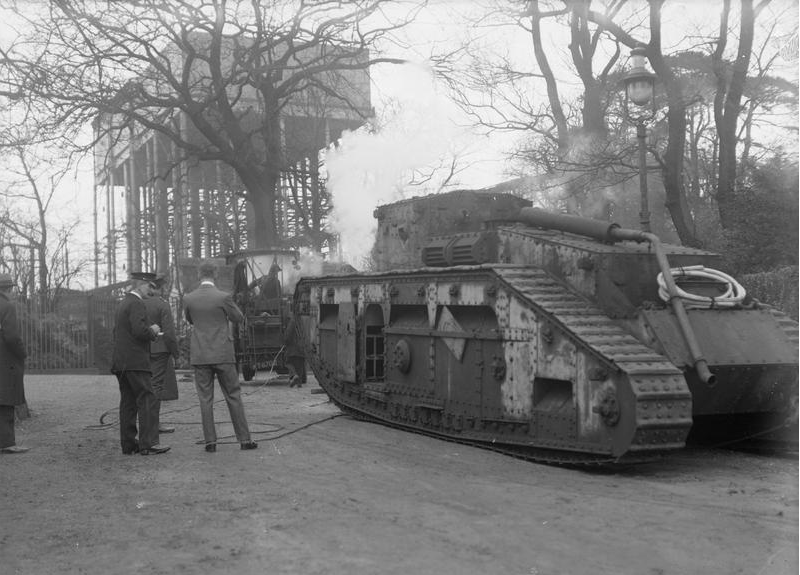 Imperial War Museum Crystal Palace, London 1920-1924 Medium Mark C being towed to Cricklewood. Photo IWM
The Medium Mark C instead formed the backbone of the Royal Tank Corps from 1924 to 1925 until it was replaced by Vickers tanks. As the Medium Mark C’s were phased out they went to stores or training. In 1930 six vehicle were sent to the Mechanical Warfare Experimental Establishment (M.W.E.E.) for development work on an armoured recovery vehicle. Two examples were sent to Bovington camp for storage but like the Medium B were not saved but cut up for scrap before WW2. There are no surviving examples. 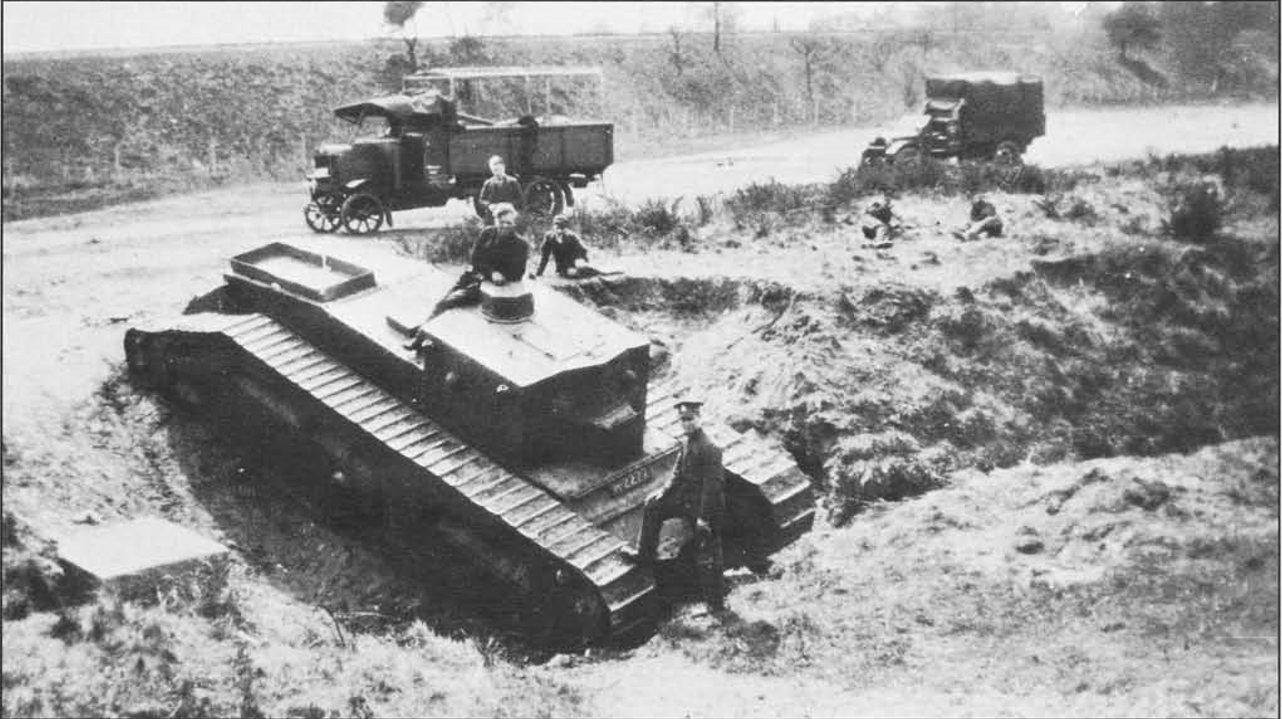 Are any of these in any museums? Great article, by the way! Neat to see more world War I vehicles!

Unfortunately, none are known to exist today.
– TE Moderator

Drat, would’ve been awesome to see in person.. Thank you!

the tank the most important military invention in warfare.

That was a awesome report.