In 1917, when the American Expeditionary Force reached the shores of France, not a single tank was available to these units. Plans were made to produce some foreign-designed vehicles, but various difficulties and the American faith in their own capabilities lead to the design of several home-grown tanks.
The value of French light tanks like the Renault Ft was observed, being easy to produce in numbers and not requiring very powerful engines. However, it was noted that their trench crossing capabilities were inadequate. 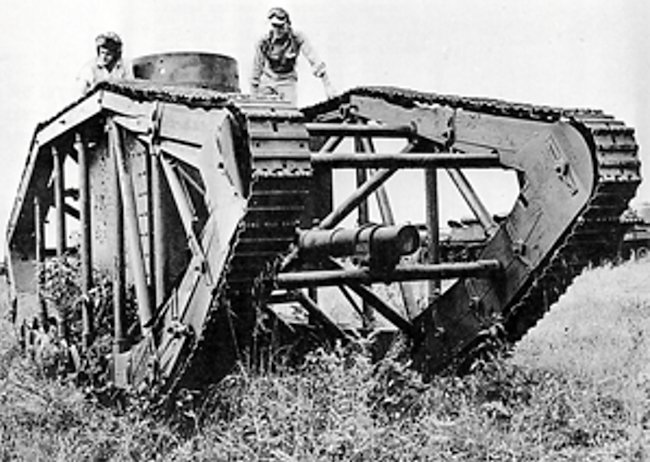 Two American soldiers climbing over the US Pioneer Tractor Skeleton Tank at the US Army Ordinance Proving Grounds, Aberdeen in 1953
The Pioneer Tractor Company from Winona, Minnesota, proposed a rather strange looking vehicle. Trying to mimic the trench-crossing abilities of the British rhomboid tanks while producing a lightweight vehicle led to one of the most distinctive prototypes of the war. While the tracks encircled a structure of the shape of its British inspiration, the crew was encased in an armored box at the center of the vehicle, with a gun turret on top and an engine on each side of the compartment. The driver had a small horizontal vision slit at the front of the tank in the upper middle section of the armored box. The commander/gunner had a vision slit in the turret.
The tracks were carried on rigidly mounted rollers installed on a tubular frame covered with wood. The pipe construction would allow for the tank to be dismantled and shipped relatively easily and then be reassembled on arrival in theater. Another advantage to this tubular design was that if one of the pipes was damaged it could easily be replaced. By using wood, steel pipes and standard plumbing fixtures the materials and maintenance skills needed to construct, maintain and repair the Skeleton Tank were minimal.
Unlike earlier WW1 and later WW2 tanks, it could wade through deep water. It had over three feet clearance with only its track and frame making contact with the water. The open design of the tank meant that what was behind the tank was visible through the tank. It did not need a camouflage to merge in with its location. 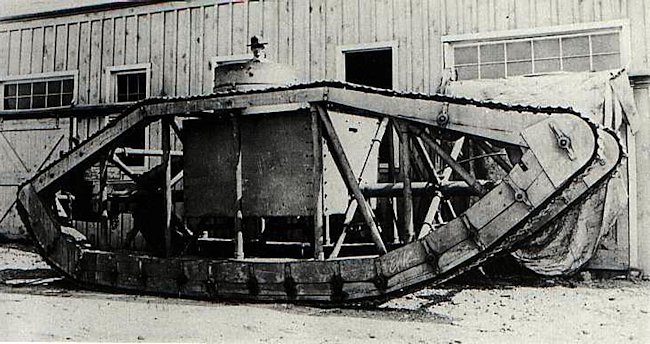 The Skeleton Tank was also called the Spider Tank by local journalists
The crew of two were protected by 0.5 in (12.7 mm) of armor. The driver sat to the front, with the gunner behind him, manning the turret. The proposed armament was a single .30 cal machine gun. One Beaver engine and its radiator was mounted inside each side of the armored compartments, while the transmissions were in a separate compartment at the rear of the vehicle.
The transmission had two forward and one rear gears, giving a grand maximum speed of 8 km/h (5 mph). Only one vehicle was built, sporting a dummy gun and turret. It cost $15,000 to construct the one prototype which is just under a quarter of a million US dollars in today’s money. The prototype was ready for trials by October 1918 but when the Armistice was signed in November 1918 most development programs were canceled. It was never used in active service.
It was paraded through the streets of Winona, Minnesota as part of it’s Victory Parade celebrations. This was reported in the newspapers. The tank went by different names in those reports: Skeleton Tank and Spider Tank were names used. The Skeleton Tank name was the most common used but it’s origins are unclear.

Who came up with the idea of a military tank first?

This is a disputed subject. The vice president and manager of the US Pioneer Tractor Company, Mr Edwin Wheelock, was contracted to manufacture the prototype Skeleton Tank. He insisted that he completed the blueprints for the Skeleton Tank and brought them over to England months before British Lieutenant Colonel Ernest Swinton had come up with his idea that an armoured vehicle was necessary to overcome the stalemate of trench warfare by forcing its way through barbed wire obstacles, climbing over trenches and destroying or crushing machine gun nests.
Swinton’s proposal was submitted in writing to the British War Office on 20th October 1914. He was serving with the British Expeditionary Force in France in 1914 and had seen how bad conditions were on the front line. Swinton had seen American Holt agricultural tracked tractors and recommended that they be armored and armed with machine guns and an artillery gun.
In August 1914, Wheelock lost a contract to sell Pioneer tractors in Canada because of war being declared in Europe. He started to design a war machine based on the caterpillar tracks used on his tractors but lengthened to run along a rhomboid shaped framework. He tried to sell his idea to the Canadians but again they were not interested.
Meanwhile, in England, the British Government Landships Committee granted William Foster & Company of Lincoln the contract to build the first prototype British tank called the ‘Number One Lincoln Machine’. This happened in February 1915.
Back in Minnesota, Wheelock hired Mr. Frances J Lowe to try and sell Pioneer tractors and his war machine design to the British. Lowe took the blueprints and some tractors to England. In April 1915, he had a meeting with Colonel Sir Henry Capel-Lofft Holden, director of Mechanical Transport at the War Office in London.
Holden dismissed the design as being unworkable because, with the initially proposed weight of 25 tons, it was too heavy to cross bridges currently found in Belgium and France. Lowe, in a later interview for an American newspaper, said he was then introduced to a Lieutenant Walter Wilson, a Royal Navy Officer who was also an engineer. Wilson took the blueprints to study them further and was told that he would contact him if the War Office wanted to place an order. Lowe was never contacted.
Wilson went on to develop the first British tanks with William Tritton of William Foster & Co in Lincoln. The ‘Number One Lincoln Machine’ prototype was completed on 9th September 1915. It did not look like Wheelock’s design. The second prototype nicknamed ‘Little Willie’ did not resemble Wheelock’s design either. Walter Wilson’s third prototype called ‘Mother’, completed in December 1915 used a lengthened track to run along a rhomboid shaped framework to give the tank better cross country performance.
It was not until newspaper reports and photographs reached Minnesota of tanks being used for the first time in battle did Wheelock get a glimpse of what the British Mark I tank looked like. He was shocked at the similarity to his war machine design. He read that a £10,000 financial reward had been offered to the person who came up with the idea of using a tank in battle. He sent Lowe back to England to claim that reward and find out why his company had not been given the construction contract.
Lowe was not given any information. He could not even find out what happened to the company’s blueprints he had submitted. Because of the War, nearly all information was classified as ‘secret’. Wheelock made a formal claim for the £10,000 prize money but after two different hearings a British Prize Court awarded the money to Lieutenant Colonel Ernest Swinton.
Wheelock’s claim was not backed up by validated documentation. He never filed a patent or kept a copy of his blueprints. Lowe said he handed the only copy to the Wilson and was never given it back.
Realistically the British Government, when at war, would not have entered negotiations with a private company of a neutral state to develop and build a new weapon. That company would not legally be able to sell that weapon without breaching its country’s neutrality. There was also a risk, in 1914, of America entering an alliance with the German Empire and that new weapon being used by the enemy. Communications and logistics problems also made the idea of a contract being awarded to an American company not practicable in 1914.

The Pioneer Skeleton tank showing off its tube structure. It is facing to the right. The crew compartment is in the middle and the transmission box is on the left, at the rear of the tank. 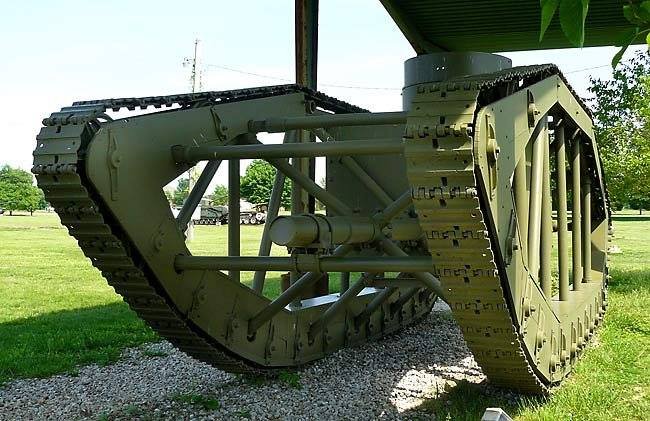 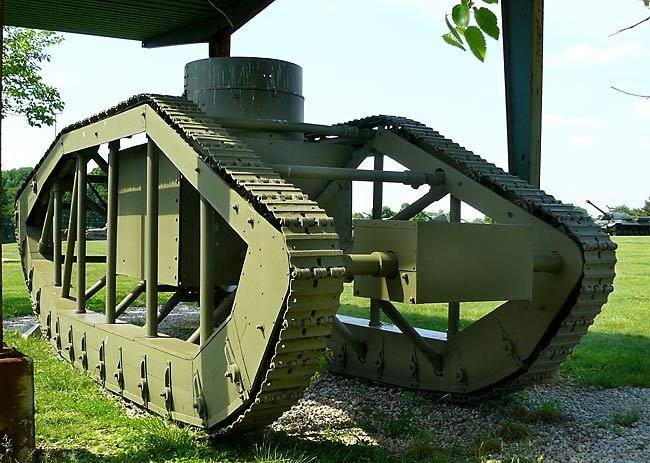 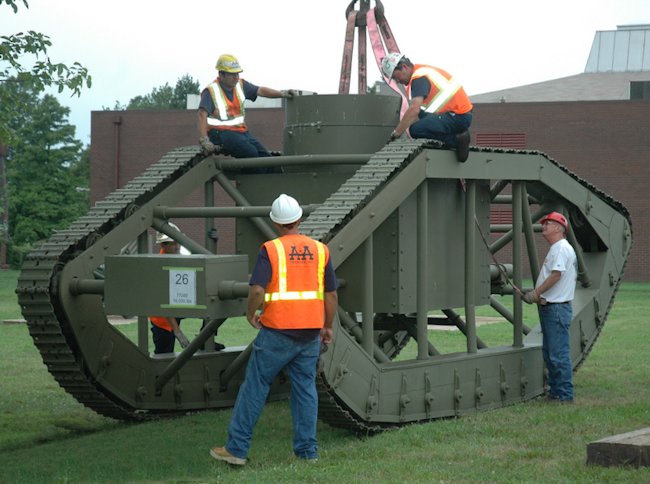 WW1 Pioneer Tractor Skeleton Tank being moved from US Army Ordinance Proving Ground Aberdeen to Fort Lee, VA, USA. This vehicle is currently stored and is not publicly visible. 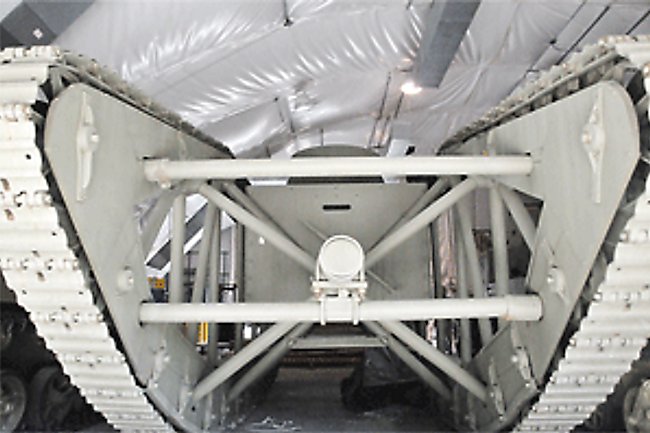 Front View – The Skeleton Tank now sits in a tent at Fort Lee. 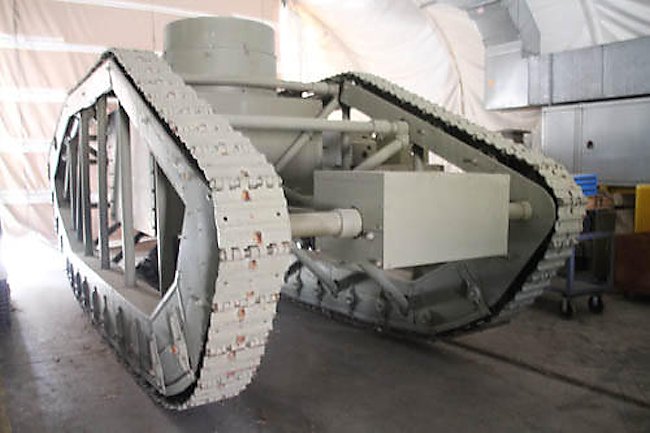 Rear View – The Skeleton Tank now sits in a tent at Fort Lee.

Where is the Skeleton Tank now?

The vehicle was at the US Army Ordinance Proving Grounds in Aberdeen kept in the open exposed to the elements. In the early 2000s it was restored. All its parts are original except the wooden frame which had rotted and needed replacing. It has now been moved to Fort Lee.
It is currently out of storage and on display in the Fort Lee military base World War 1 training gallery being utilized for Ordnance students training. This vehicle is currently not on public display. Please send us any new photographs you have of it in its new location.

My grand father leoland losinski of Winona worked for pioneer tractor and helped invent the Skelton design of the army tank. He was awarded a lot of money for his expertise. Urrently there is a totially restored pioneer tractor from North Dakota. I did see it run in Winona during steam boat days many years ago. My mother Sophia-was a daughter of Leo losinski family. I live in Winona county and farm in Utica area?

Weird-looking, but actually quite well thought-out design. Light, compact, with great cross-terrain abilities and good protection (vitals are armored, other parts are “transparent” to most munitions). Not without its own problems, of course – the hull is pretty tight – but if the war dragged one more year, it could easily become the best light tank of it era.

I live in wisconsin, and I am currently doing a project for school. Would you be able to provide more info on this tank, or any other tanks from World War 1?

Uhm, Will, there is plenty of info on WWI tanks on our website. More than a book worth of info.