The tank concept itself was new to war having been unleashed on the Germans on the 15th September 1916 at Flers-Courcelette. William Tritton (knighted February 1917 for his services relating to tanks) was at the front in person less than a week after this first use of tanks. No doubt seeing first hand the appalling conditions through which his larger ‘rhomboid’ (male and female) tanks were having to proceed caused Tritton a great deal of thought.
By November 1916, less than two months after this visit, work on this light tank formally began and actual construction of a prototype was started on the 21st December 1916. This remarkably short design and development time is both a tribute to the skill of the designers; William Tritton and William Rigby, and the factory staff but was also to cause problems with the vehicle. Tank warfare was a brand new concept and the trailblazers in any field will make mistakes so some of these faults can be excused to a certain extent. 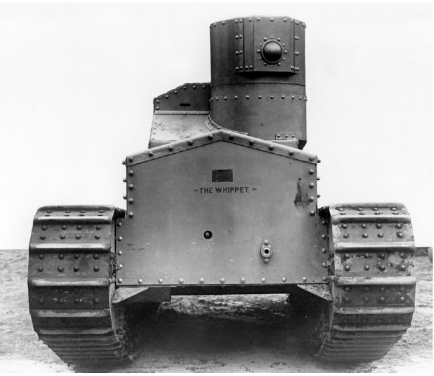 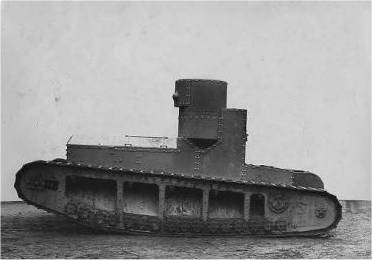 ‘The Whippet’ nickname already applied to the flat front of the Tritton Chaser would later stick as an official name. The small hole below it is for the engine starting handle. Photo: IWM 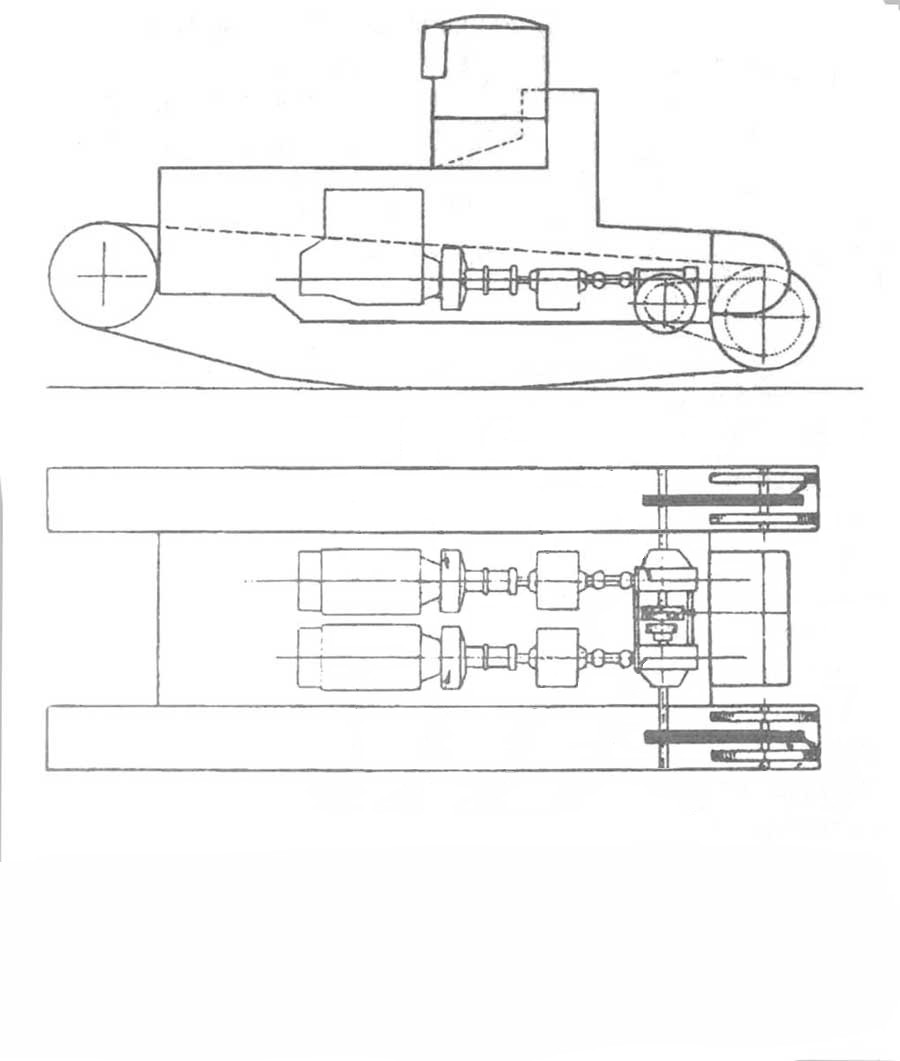 Layout of the Tritton Chaser machine’s twin engines. (Source: Adapted from Logbook of a Pioneer, Stern)

The first machine, known by the 3rd February 1917  as the ‘Tritton Chaser’, was already able to move under its own power and for the first time featured a fully rotating turret for a single .303 calibre Lewis machine gun on a similar appearance to that of the Austin armored car of the period. It sported the name ‘The Whippet’ already and the name would stick.
This first vehicle had problems however, the front was a single vertical plate covering the engine and the driver offset to the right had a very limited field of vision. The fuel tank was at the rear and was unarmored and the machine had no exhausts on either side, meaning the crew would be directly exposed to engine exhaust gases.
This vehicle completed a running trial first of the 11th of February, and then formally on the 3rd of March at Oldbury, near Birmingham where it was demonstrated to representatives of the Ministry of Munitions. At this time the machine was ‘Tritton’s Chaser’ but was officially noted as being ‘Tritton’s Light Machine (EMB) [Experimental Machine ‘B’] and given ‘No.2’ as it was the second vehicle tested that day. During the tests, this vehicle sported a single horizontal green painted band running all around the hull just above the level of the tracks, as each vehicle tested was color coded with green being vehicle number 2 that day as this color coding would help the senior British and French officers present to tell apart which of the vehicles was being tested.
The suspension consisted of 16 sets of Skefco roller bearings on each side above which are the very distinctive holes in the side through which mud picked up across country would be discharged and which also doubled as an additional layer of armor and reduced the weight of the machine. This arrangement was patented by Tritton in a filing dated the 2nd of February 1917 clearly showing the outline of what was to become the layout of the Whippet albeit with just four mud chutes and not the 5 initially used on this first machine. 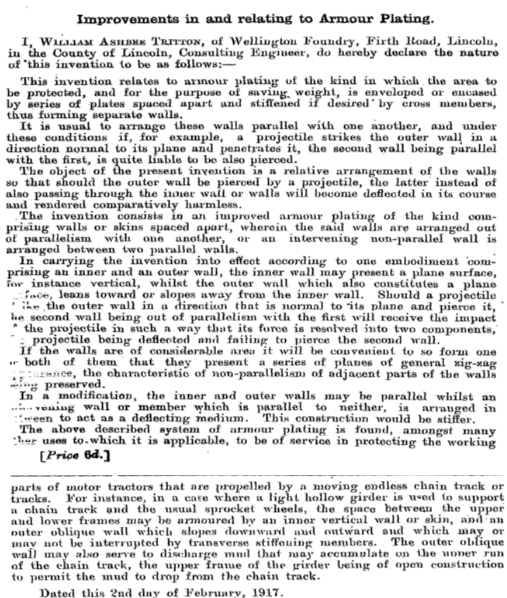 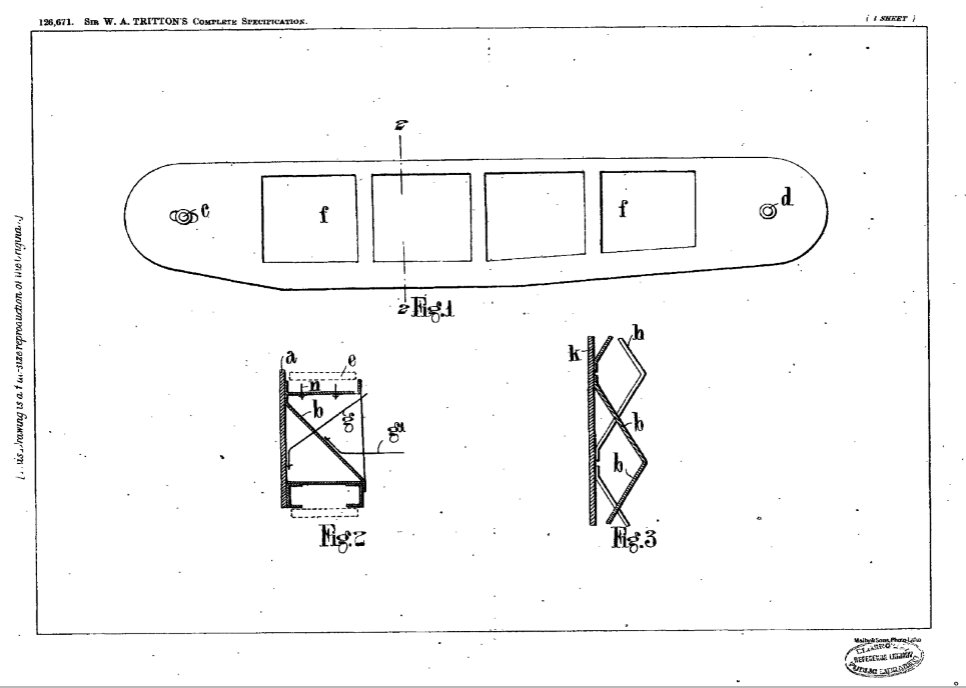 Images: Patent GB126,671 filed 2nd February 1917
Despite the flaws in the machine it managed just over 8 mph (12.9 kph) as a top speed from its twin 45hp Tylor JB4 petrol engines which was nearly double the speed of the Mark IV and V tanks. Tritton had preferred a more powerful engine to take the tank to over 10mph but the War Office (WO) had supply problems for engines so the 45hp Tylor was all there was for the tank. Sir William Tritton was later to remark that “the choice of the 45hp engines had spoiled an otherwise useful machine”. The drive system was unusual and difficult to master. Each engine drove a separate track and steering was effected by way of the driver adjusting the throttle control on each engine but it did have the advantage of only requiring one driver.
Many of the initial design features of the Chaser tank did eventually make it into the production vehicle but this initial machine was first rebuilt with the top of the machine stripped back. The turret was removed and a much large polygonal superstructure built instead. An exhaust was added to each side of the engine and but it retained the fuel tank at the rear. Machine gun ports were cut into the new polygonal superstructure and at least one ball mount fitted in the right hand side but the front of the engine bay lacked any additional vents. 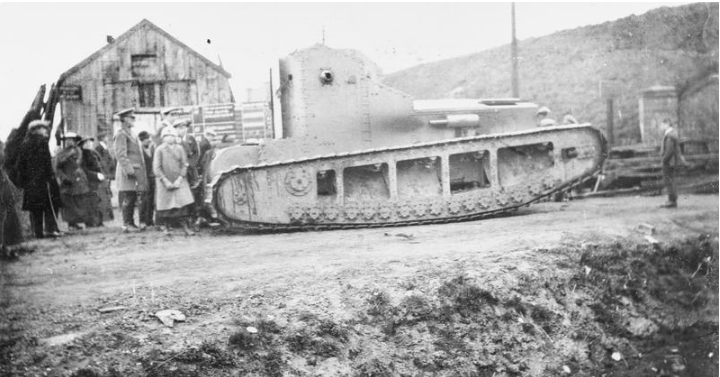 Rebuilt Tritton Chaser pictured on trial on the William Foster and Co. test field. Photo: IWM
In this form, it was envisaged to now take up to four Hotchkiss .303 calibre machine guns, one in each face of the superstructure covering each side of the vehicle. The crew had increased from 2 to now as many as four (driver, commander and two machine gunners). Further work was then done to this machine with additional engine vents cut into the sides of the engine bay at the front and the moving of the fuel tank to the front under a rounded cover. It is speculated that this may have been to adjust the centre of gravity for the vehicle to improve its trench crossing ability.

The rebuilt Tritton Chaser with its trailing wheels 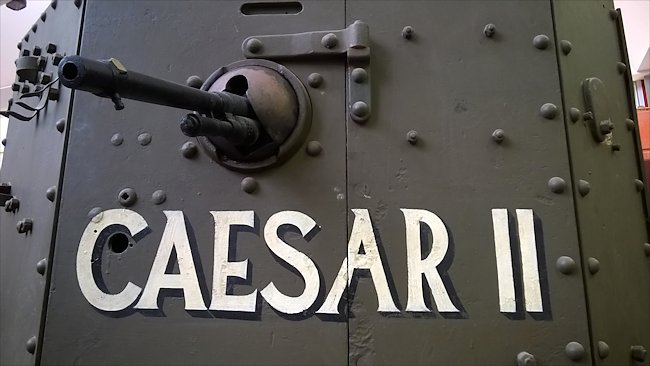 Close up the Hotchkiss machine gun mount as preserved on A259 Caesar II at Bovington. Photo: tank-hunter.com 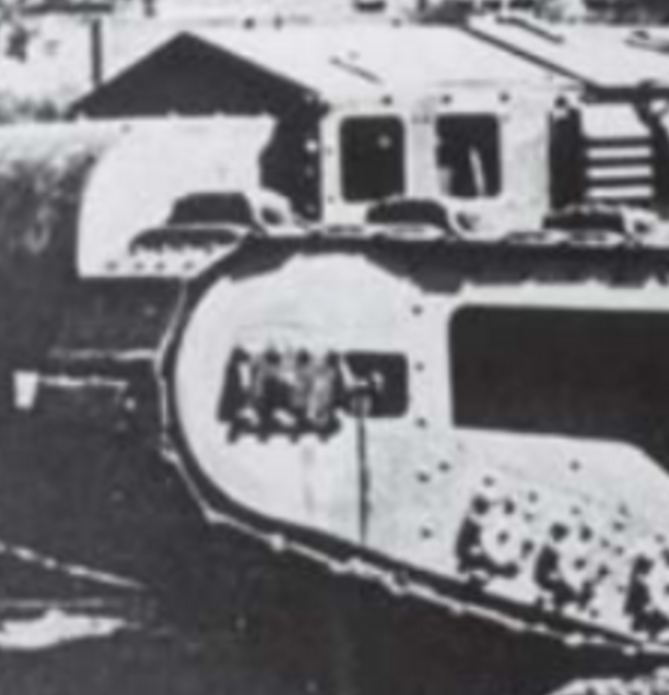 Rebuilt Tritton Chaser showing the holes cut for the vents and the new forward placement of the fuel tank. In this photo the vehicle is also using prominent track spuds to obtain additional traction in soft ground. In practice these were used very rarely. Photo: IWM 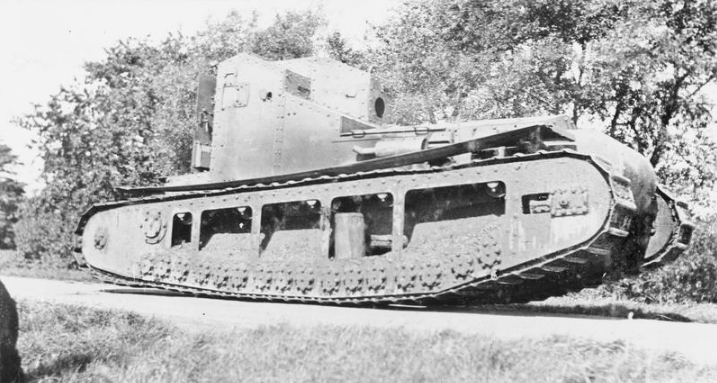 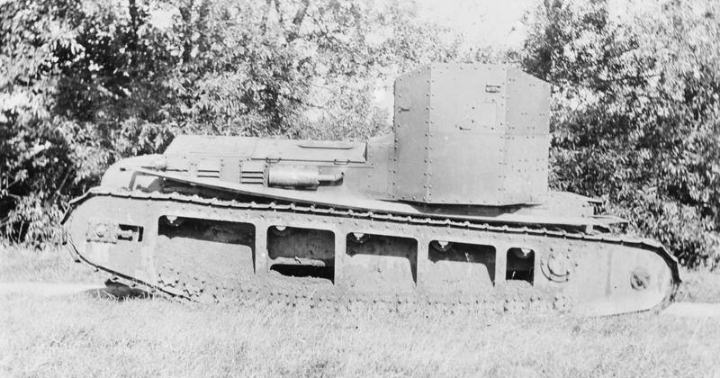 Rebuilt Tritton Chaser with a rudimentary canvas track guard fitted presumably in an attempt to limit the amount of mud being thrown up onto the vehicle. Machine gun ports have been cut but no armament is fitted. Photo: IWM 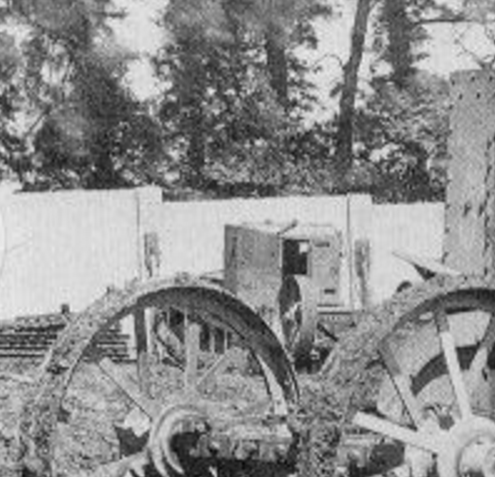 Rebuilt Tritton Chaser with experimental wheels fitted (the vehicle in the foreground is a gun carrier). Photo: IWM

This prototype vehicle remained at the testing grounds of the Mechanical Warfare Supply Department at Dollis Hill, London where it was later tested with trailing wheels and even a rear tail-skid (presumably akin to that of the Renault FT) to try and improve trench crossing. No photo of this skid fitted seems to have survived and there is only one poor quality shot of the wheels fitted. It was eventually moved to the Imperial War Museum and later scrapped.The wheels were found to be more effective than the tail skid. Trench crossing trials were held in May 1918 without either wheels or a tail-skid fitted. It was found that the effective trench crossing limit of the production Whippet tank to be 10 feet (3.05m) although the official figure was 8.5 feet (2.59m). Trench crossing ability was to plague the mind of the British military in not just WW1 but well into the next war too. The Army had their lighter faster tank design ready now to go into production.

In 1916, the British Army had started using tanks in battle in an attempt to break the deadlock of trench warfare. These large lumbering Heavy Tanks were slow and unable to exploit weaknesses in enemy lines or a breakthrough. What was needed was a new ‘Medium’ Tank, and the Lincolnshire firm of William Foster and Co., the brains behind the Heavy Tanks set to work on a new Medium vehicle. By February 1917, this new vehicle, known as the Tritton Chaser or ‘Whippet’ was ready in prototype form. Two hundred of these Whippet tanks, officially known as the Medium Mark A were produced. This manual dates to the early days of the Whippet as it was being produced for the Tank Corps. A guide to the operation and maintenance of this new, smaller, and faster tank.