The only WWII Australian tank design

Among the Commonwealth nations, Canada probably had the best industrial capacities and helped Allied tank production during the war. Canadian factories built Shermans, as well as the Ram or the Sexton, which were indigenous designs. Australia and New Zealand had more limited industrial capacities but nevertheless pushed on their own designs, especially as the Japanese threat grew steadily in early 1942. If the Bob Semple tank was an oddity, more conceived as a morale booster than a real frontline tank, the Australian AC I was a fully-fledged cruiser tank, first intended for combat in North Africa, and first homeland domestic production.

Design of the Australian cruiser

The first sketches of the AC tank were drawn in November 1940, when the situation in Europe was so dire that the Commonwealth was mobilized, and dramatically impulsed when war broke out with Japan. To save time, the basis had to be the American M3 Lee, but with a British Crusader style low-profile turret and hull. However, by late 1941, no prototype was ready and the plans asked for a medium tank. The design was altered and protection was increased to 65 mm (2.56 in), in the light of recent engagements of the Crusader in North Africa.

The AC I borrowed multiple elements to the M3, but the three HVSS bogies had a specific design, resembling the French Hotchkiss H35. The tracks were of the rubberized standard US-model. Since both intended original engines, the radial Pratt & Whitney Wasp and the Guiberson diesel were not available, three regular Cadillac V8 346 in³ 5,7L were chosen instead, arranged in a clover-leaf formation connected to a common crankshaft. The turret was very similar to the British design and the hull kept a low profile as intended, but the most remarkable fact was that both were cast in a single piece. Only the hull nose was bolted, as well as a few external fittings. Armament was also similar to the Crusader, with the main QF Vickers 2-Pounder (40 mm/1.57 in), one coaxial Vickers .303 (7.7 mm) machine gun and one hull machine gun protected by a massive armored mantlet, encasing the machine-gun watertank. Despite using many parts already available from other tanks design, the development took time. The definitive design came out in February 1942. The series prototype began its trials in August 1942, delivered by the New South Wales Government Railways. When approved, Chullora Tank Assembly Shops at Sydney did the final assembly of the 65 machines delivered from November 1942 to June 1943.

The armament of the Mark I "Sentinel" was seen as transitional since the beginning, before the QF 6-pdr 57 mm (2.24 in) could be available, shadowing the evolution of the Crusader. The new AC-II was intended to be sent in North Africa by late 1942, dealing with the latest 50 mm (1.97 in) armed Panzer III and up-gunned Panzer IV F2. However, these plans never materialized as no 6-pdr had been delivered yet. The AC Mark III, received much consideration as a stopgap measure. This was a standard AC I but modified to serve as an infantry support vehicle, more suitable for the ANZAC\'s needs in New Guinea. The already available short 25 Pounder howitzer was chosen for the task, inserted into the same turret and mantlet with only minor alterations. But to make room for the voluminous shells, the hull machine gun was eliminated and the crew reduced to four. Armor was raised up to 75 mm (2.95 in), and the engines were rearranged in a radial formation and connected together on a common crank case (the "Perrier-Cadillac" configuration), much like the Chrysler multibank. The first prototype had just finished its trials and the first production batch of 25 was in full sway in July 1943 when the entire program was terminated by the Government. Another offspring of the Sentinel was the AC IV, which was to be equipped with the new British 17-pounder antitank gun, first simulating the recoil while mounting together two howitzers, and then with the real thing in the summer of 1943, quite successfully. To cope with the added weight, four Holden Gipsy Majors ware mounted together. But yet again production never materialized.

The termination of the entire Australian Cruiser program was dictated mainly by practical and budgetary reasons. Cheaper M4 Shermans were now available in numbers though lend-lease, and the lack of infrastructure led to the startling choice of building Australian locomotives instead and improve the railway network capacities. The public-owned company was summoned to return to its main specialty. Due to the lack of tanks delivered to equip armored units, the entire lot of AC I was never shipped abroad but kept for training and testing purposes instead, then placed into storage until the end of the war. A few from the 3rd Army Tank Battalion made an appearance (under German colors) during the "Rats of Tobruk" movie, firing blank shells. After the war, all but three Sentinels were sent for scrap. The surviving ones are displayed today at Bovington and Puckapunyal museums, and the Australian War Memorial in Canberra.

Links about the AC-1 Sentinel

The AC I/III/IV on Wikipedia

Australian Cruiser Tank Mark I (AC I) number 8013 during tests near Sydney, early 1943. A design influenced by the British Crusader and the M3 Lee, using local and US tank parts. Despite having stronger armor than the British Cruiser VI, this model was never tested in combat. In a what-if scenario, they would have not even been ready for action in Tunisia.

The AC III "Thunderbolt" was a close support version using an available 25-pdr (90 mm/3.54 in) howitzer. 25 were being produced when the entire program was cancelled in July 1943. 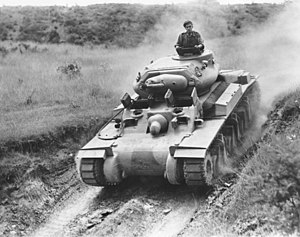