Even while the T43 (M103) was still in development, the U.S.A. was not done with attempts at making better heavy tanks. Development was split into two schools of thought. One based its work on the T43, leading to the T57 and T58 auto loading tanks; and the other started from scratch.

In June 1954, the Detroit Arsenal held its third Question Mark Conference, the goal of which was brainstorming ideas for new heavy tanks. Suggested designs included the TS-2, TS-5, TS-6, and TS-31.

Conditions these proposals had to meet were that a prototype had to be constructed within two years (hence “TS”, for “Tracked vehicle Short Development”), and it had to be able to fit within the confines of the Berne International Clearance Diagram; a code of standardization for rail tunnels established at the international conference at Berne, Switzerland, in 1913. (There is no single Berne National Tunnel, as claimed by Hunnitcutt’s ‘Firepower’; this was merely a building code for rail tunnels)

In the end, the TS-31 was chosen for further development; it had a gimbal gun mount, and was estimated to weigh 45 tons. Chrysler was assigned to the development of the TS-31, which was given the designation “120mm gun tank T110”; at the same time, the T43 was entering pre-production.

The TS-31/T110 had a driver in the hull, a gunner to the left of the gun, a commander and his machine gun cupola to the right of the gun, and two loaders. It was rear-engined and had six roadwheels on either side. Armor was to be as thick as 9 inches (228.6 mm) on the gun mantlet. Despite the TS-31 concept being chosen as the winner, it still was slightly too big to fit through the Berne Clearance Dimensions. Additional problems were found with the off-center commander’s cupola: the additional metal to support it added to the tank’s weight and increased its size. These flaws led to Chrysler redesigning the tank.

The second draft was an improvement over the original TS-31. It was slightly smaller, becoming shorter and the front becoming flat. The driver was moved into the casemate, to the left of the gun, with the gunner being moved to the right of the gun. Behind the driver and gunner were two loaders and the commander behind them. The commander was placed directly in the middle of the tank, leaving him to sit almost directly atop the engine and with his feet worryingly close to the gun breech. Despite all this, it was still too big to fit through the Berne Clearance Dimensions. Size, in addition to the Detroit Arsenal’s disapproval of the driver’s position, led to a second redesign.

The third draft was sort of a reversion to the original; the driver was moved back to the hull outside of the casemate, and the gunner was moved back to the left of the gun. The commander’s turret was moved slightly forward, so he would no longer have to sit on the engine, but was now forced to sit in a very awkward and cramped position in order to avoid being crushed by the gun’s recoil every time it fired. The casemate reverted to being rounded at the front. The third draft was no smaller in size than the second.

The Detroit Arsenal replied to Chrysler’s two proposals with the fourth draft of the T110. The casemate was moved to the back, hanging over the rear of the tank. The transmission was moved to the rear as well, joining the engine. In its place up front was a massive fuel tank, nearly encompassing the driver. The power plant (which was now a Continental 700 hp AOI-1490) was pushed to the left to afford the commander a more comfortable (but still probably hot) position on the far rear right. The suspension was changed to a more conventional (for the Americans) type, with smaller road wheels; although the original draft is without them, return rollers would have been necessary.

Hammering out a Design

Chrysler rejected the Detroit Arsenal’s idea to put the casemate on the very back on the tank and kept it in the middle. The driver was moved back inside the casemate, to the right of the gun. You may know this vehicle as the T110E3 or E4, although these designations are completely fictional. Chrysler originally tried to simplify maintenance on this design by allowing the engine to be pulled out, on rails, via a hatch in the rear of the tank. This feature created rigidity issues and the engine was returned to a standard position, now turned lengthwise in the tank. This new engine placement again left the commander stuck between the engine and the gun breech. The gun mantlet, which had been relatively tiny before, was much bigger in this iteration; weighing 2 tons and being 9 inches (228.6 mm) thick. The tank was now short enough to fit through the Berne Tunnel, but it was still too wide.

This version of the T110 was the first to have serious work done on it. A wooden mockup was built and engineering diagrams were drawn up. Gun traverse was 15 degrees to each side, with 20 degrees of gun elevation and 10 degrees of gun depression. Armor was 5 inches (127 mm) at a 60 degree slope from vertical. Secondary weaponry comprised the commander’s .50 cal (12.7 mm) M2 Browning, as well as a .30 cal (7.62 mm) paired with the main gun. 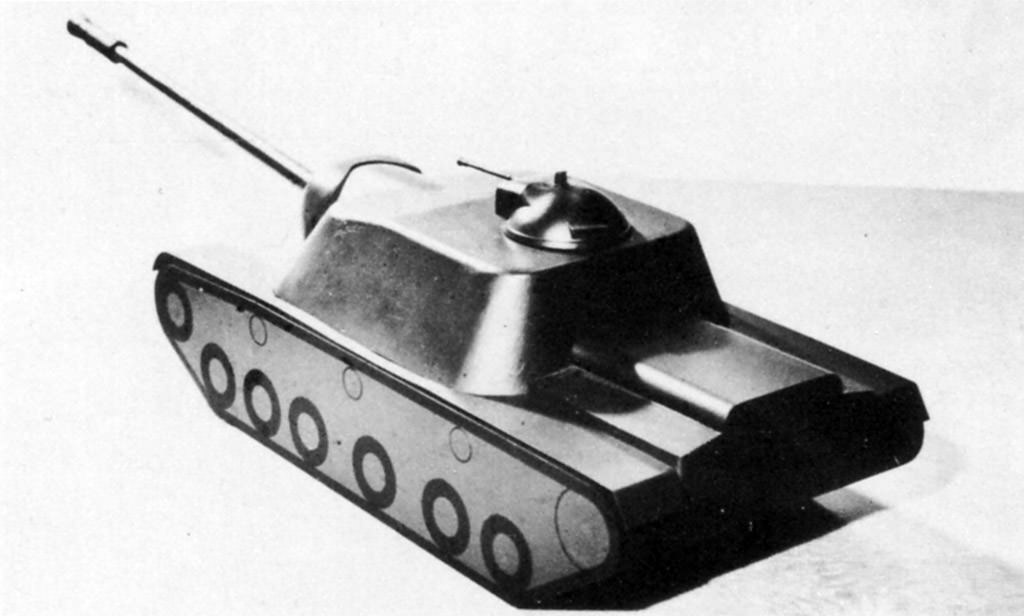 At some point, Chrysler realized that there was no need to stick with a casemate design, as a turret could be accounted for within the weight requirements for the tank. In its sixth iteration, the T110 was completely changed, becoming a far more conventional tank. The driver was moved to the middle of the hull, under the gun barrel. The crew was reduced to four instead of five men by dropping a loader. To ease the life of the remaining loader, a gun rammer was fitted. The gunner was on the left of the turret, with the commander above and behind him, and the loader on the right. This, the last version of the T110, shared the 85 inch (2.16 m) turret ring with the M103. Engineering diagrams and a small-size mockup were made, but by this time the T43E2 had been built and showed promise. The success of the M103, as well as changing ideas in terms of tank design, were the doom of the T110, and the project was canceled. 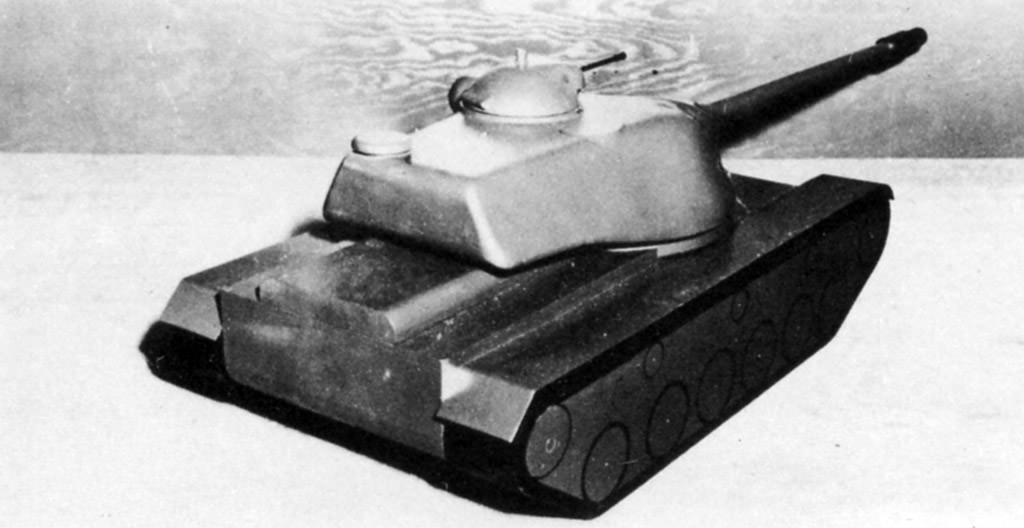 Even the definitive version of the T110 failed its main goal, as it was still too big to fit through the Berne Clearance Dimensions. 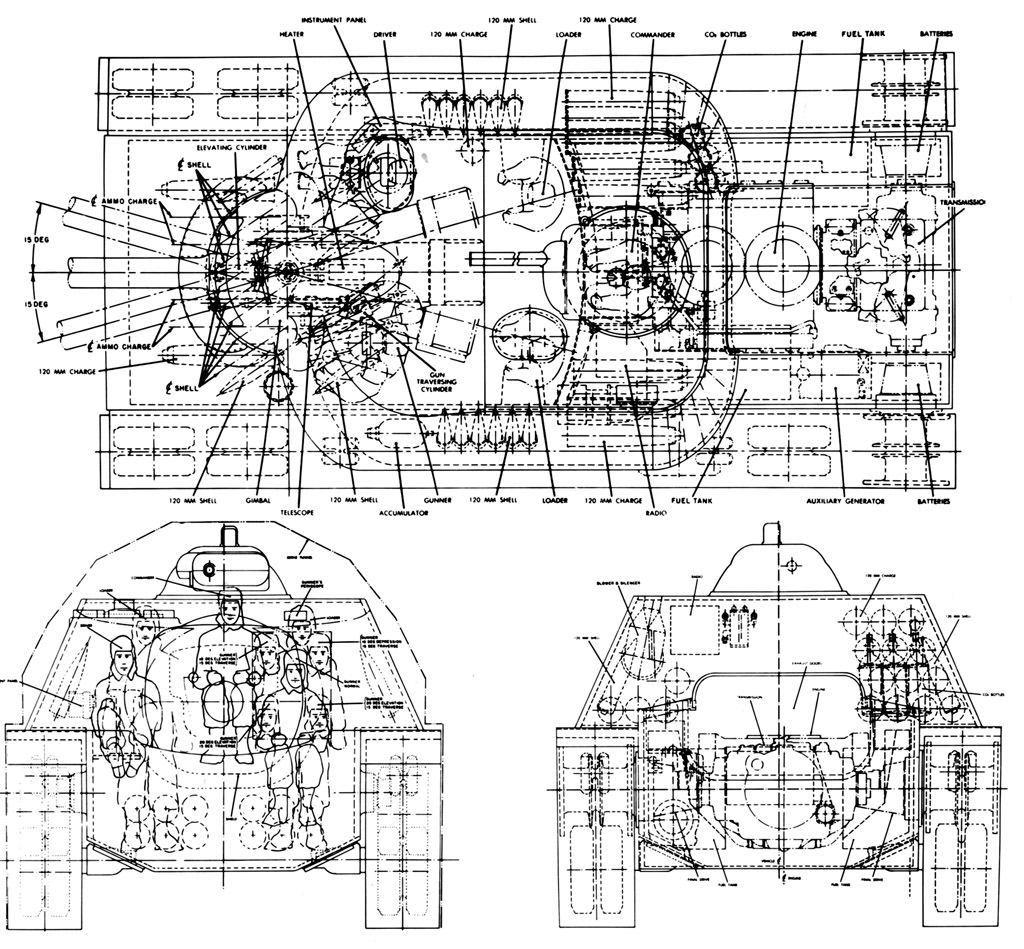 Schematics of the fifth T110 design Schematic of the sixth T110 design

The fifth T110 design submitted by Chrysler. The 120 mm cannon is mounted in a fixed superstructure, with a machine gun armed commander’s cupola on the roof. Illustration by Jaroslaw “Jarja” Janas.

Why would it have to fit through that specific tunnel? Any ideas?

The article has since been updated as new information has come to light. It was not an individual tunnel, but a building code.

Illustrations for the tank?

This page shows the T110E6 as being the design of the T110E5 in WoT. Does that mean that the tank is WoT is actually the E6 or is this dta wrong?

WG’s T110s are misnamed. In some cases they also have the wrong guns.
– TE Moderator

is there other T models tanks

Sorry for another WoT-related post.
The T110E5 in WoT seems to use an early M48 modified hull. Yet the hull of the T110E6 in concept seems more related to the M60 hull both in frontal armor and the engine housing. Had the vehicle (T110E6) been made would it be more accurate to say the hull would’ve resembled M60 rather than the M48?

WoT’s T110 tanks are have a lot of fictional elements. if I recall correctly, the reason why they resemble M48/M103 egg shaped hull is due to the fact that Wargaming assumed that the T110 was related to the M103. it would have resembled the M60’s hull assuming that no other T110 concept replaced it. The ‘E’ modifier on the T110 designation is fictional, Wargaming invention.

Again, it would have been the 7th design, so by your counting, T110E6 😛
Also, it was never ever called that. None of the T110 designs ever received an E moniker. That is just some shit Wargaming made up.

Its funny that you cite Firepower for this entire article… and then mis-label the 5th T110 proposal as the 6th. Even Firepower says the turreted T110 proposal is the 5th design…

Avalon, might I suggest you go reread Firepower?
Hunnicutt clearly says that the turreted vehicle is Chrysler’s fifth design, not the fifth design of the T110 series. However, strangely, counting them up, it should be the seventh design, not the sixth! 2 from Detroit+5 from Chrysler = 7 T110 designs!

I literally counted them on this page… and there’s 5 designs…
1. TS-31/T110
2. Chryslers 1st design
3. Chryslers 2nd design
3. DA’s counter proposal.
4. DA’s casemated revision
5. Turreted T110
I dont see a 6th design… or a 7th for that matter, even referenced on this page. Let alone in Firepower, which is currently in my hand.

Also, nice to meet you mate, I know of your work on WoT skins! Keep it up!

Hello Sean!
First off, please note that the E designations for the T110 are entirely fictitious, no such thing was used or planned. These were competing projects, not successive improvements for a vehicle.
Also, you’re missing a vehicle! Your 5 is Chrysler’s fourth revision and your 6 is Chrysler’s fifth revision. There is also Chrysler’s third revision, which is not pictured anywhere but is mentioned in Hunnicutt

So if a rename is to occur would it be more accurate to do something like T110 rev. 6?

The prototypes never came into existence. Only drawings.

Will you guys ever do the T110 6th version with the turret?

This website uses cookies to improve your experience while you navigate through the website. Out of these cookies, the cookies that are categorized as necessary are stored on your browser as they are essential for the working of basic functionalities of the website. We also use third-party cookies that help us analyze and understand how you use this website. These cookies will be stored in your browser only with your consent. You also have the option to opt-out of these cookies. But opting out of some of these cookies may have an effect on your browsing experience.
Necessary Always Enabled
Necessary cookies are absolutely essential for the website to function properly. This category only includes cookies that ensures basic functionalities and security features of the website. These cookies do not store any personal information.
Non-necessary
Any cookies that may not be particularly necessary for the website to function and is used specifically to collect user personal data via analytics, ads, other embedded contents are termed as non-necessary cookies. It is mandatory to procure user consent prior to running these cookies on your website.
SAVE & ACCEPT
70 shares