In August 1945 an insurrection overthrew Marshal Antonescu and the fascist regime. A new provisional regime sympathetic to the USSR as established and, until the end of the war, Romanian Forces fought under control of the Red Army against German Armies to claim back its territory. After the war, Romania entered the Soviet sphere of influence and later joined the Warsaw pact.

These years were dominated by the “Sovietisation” of the country and army (adoption of Soviet tactics and doctrine) and Minister of Defence’s, Emil Bodnăraş, reforms, followed by the beginning of a semi-autonomy under the Ceaușescu regime. In the 1980s, the land forces comprised 140,000 personnel, of whom two thirds were conscripts, organized into four armies: 1st at Bucharest, 2nd at Buzău, 3rd at Craiova and 4th at Napoca. Just before the 1989 revolution, the armored forces were partitioned between 8 mechanized infantry divisions and two armored divisions, the 57th (Bucharest) and 6th (Tîrgu Mureş). 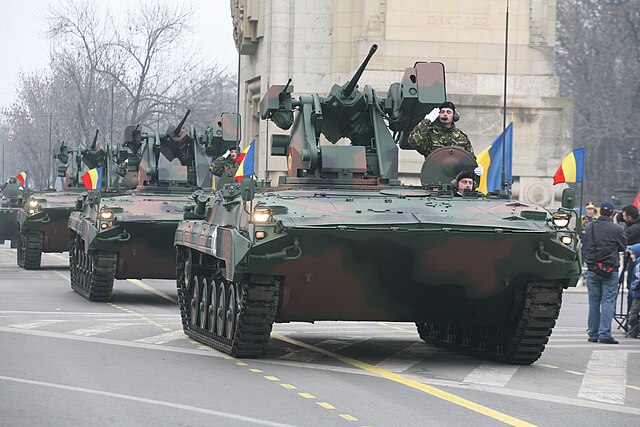 MLI-84M at a Military Parade

Although the Army was supplied with Soviet tanks and APCs, industrial resources allowed some local production, either under licence and/or with extensive modifications in the 1980s. These locally produced models were the TAB-71 (BTR-60), TAB-77 (BTR-70) and TABC-79 APCs (4×4 variant of the latter), and later B33 Zimbru (BTR-80) and MLI-84 (BMP-1) and MLVM (local IFV). 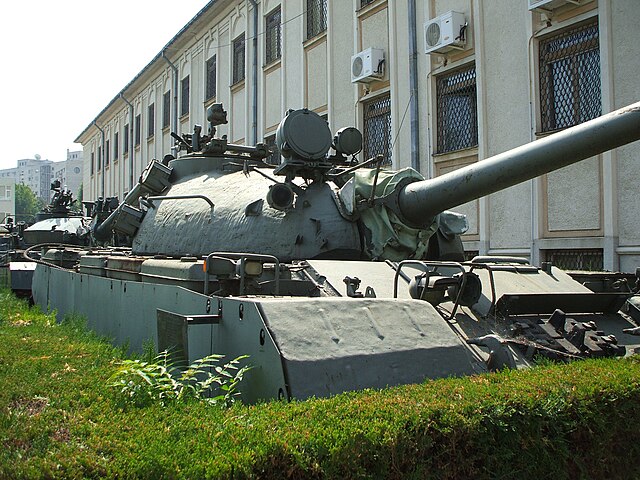 TR-580 at the Ferdinand Museum

Romania relied chiefly on T-55As, modernized into the AM and AM2 versions prior to 1990. Development of a local MBT began in 1977 with the TR-580 or Tanc Românesc Model 1977, a well-modified T-55 with, among others, a new engine, suspension, tracks and roadwheels, new FCS and new local gun. It evolved until 1985 with the introduction of the TR-85, which is now the reference MBT of the Romanian Ground Forces.

The fall of the autocratic regime of Ceaușescu was greatly helped by the defection of the Army, which joined the insurrection. At that time, however, finances were at their lowest and the army was left with obsolescent material, lack of spare parts and, more critically, fuel. During the first phase of reorganization, major units were disbanded, while obsolete vehicles were sold for scrap. In the early 1990s, the new organization included territorial corps and the regiments became battalions.

In 1996, the new government dramatically increased the military budget, and the full applications of these reforms came to fruition in 2000, with foreign purchases including, until 2013, new wheeled vehicles, 31 MOWAG Piranha III, 122 HMMWV, 62 URO VAMTAC, 16 Panhard PVP, while many tanks and other vehicles were modernized. A major change was the transition from a large, Soviet-style conscript army to a smaller, professional well equipped and well trained army. Diversity in equipment also illustrates these changes, with purchases of US vehicles, weapons, and joint tactical training sessions. The modern structure of the Army implies three divisions, the Bucharest Garrison, the Honor Regiment, a few independent supporting battalions and instruction centers. At all tactical levels procedures and equipment were made compliant with NATO standards.

The Romanian army saw action in the 2000s, taking its “tour of duty” in Afghanistan, using many leased MPVs and MRAPS, along with its own vehicles, for patrols and operations. Such vehicles were 108 Cougar HE, 60 MaxxPro Dash and some M-ATV. One battalion was stationed in Zabul, one guard detachment in Kandahar and one reconnaissance squad in Mazari Sharif as part of ISAF. A special forces squad and training detachment were also deployed in the area. About 45 personnel were deployed in Sarajevo and Banja Luka as part of EUFOR since 2000 and 150 personnel in Peć, Kosovo (KFOR).

The Romanian Ground Forces
List of vehicles and equipment (modern) 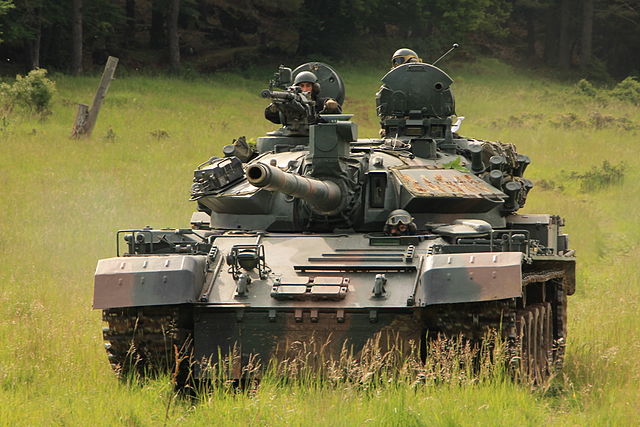 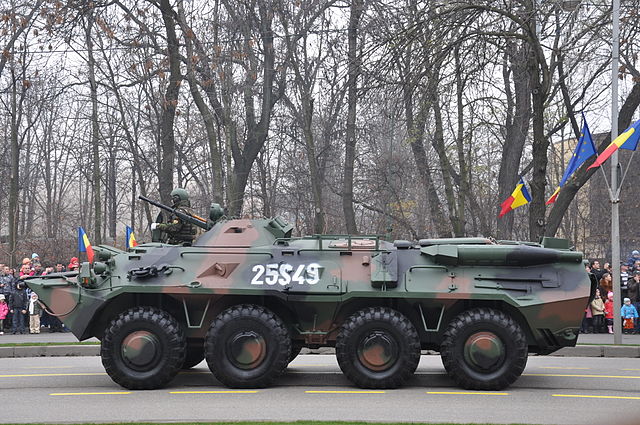 TAB-71 armoured personal carrier, a local version of the BTR-60

TABC-79 in the 1990s. Post-revolution vehicle were very often camouflaged, with a large variety of spotted patterns over the original factory dark green. T-55A in Romanian service. This helps to see the differences with the TR-77.

TR-77 MBT of serie, with the large side skirt model

Late TR-77 with the elongated turret model adopted by the TR-85M1.

Reconstruction of an Iraqi TR-580 in operational markings, Iran-Iraq war. This is purely conjectural as no photos or evidence of this tank in Iraqi service has been confirmed.

I’m guessing all of these tanks will get there own page?

Paulus commanded the 6th army, not the 11th
“the flanks of Paulus’ XIth army engaged in and around Stalingrad”

Checked and fixed, thank you.

Romania had panthers and tigers too ! in ww2 !
they were brought by trains on the romanian borders.
romania paid lots of money to russian gov to not destroy country but it was inevitable.
romania was defeated with tigers/ panthers/ jagdpanthers/ stugs

Incorrect it was actually the Hungarian army who were given (not sold) tigers an panther tanks, because the german commanders felt the hungarians were worthy of the equipment.

Romania received in 1946 a number of 13 Panthers from the Soviet capture stock, as well as a Hummel. Unfortunately, no Tiger.

From what i read, Romania had around 30 T72 tanks in the late eighties and a prototype based on T72. Will those be added to the page?! Also, the TR85 from the picture is the one designated as TR85-800? And any data about the TR85M1 variant(photos, characterstics)?

Hi Dudec
Of course, the T-85, as one of the modern European MBTs will be added soon or later. For the T-72 that depends of the depth of local modifications, be default informations about these could be found there and on the T-72 page

“Tîrgu Mureş” is actually Targu Mureş if you are talking about the city in South Eastern Transilvania.

Hello Mihai!
The “Tîrgu Mureş” spelling is correct for the Cold War era. It changed to “Târgu Mureș” after 1989.
All the best!

Afaik there were no modifications made to the 30 T-72 Romania had / has. 5 of them were confirmed in working order as of 2014, the others are either sold or rusting around Bucharest.

In a friendly fire incident one got shoot in the ass by a T-55 during the ’89 revolution (mostly with HE, considerable engine damage, crew was unharmed). The T-72 was kept secret and in the chaos of the revolution the T-55 unit wasn’t informed they were there and were also bombardment by misinformation (which include news about counter-revolution foreign tanks).

HE hits did only “cosmetic” damage. It was then hit with 2-3 HEAT from which 2 penetrated the engine compartment.

TR125 is currently exposed to the Military Museum from Bucharest, along with one of the T72’s that served the Romanian Armored Forces.

Some data was added on wiki

Some pictures are available, though it would be nice if one of the romanian readers can provide some without watermark for this site.

In the right is the TR125, formerly designated as P125 (prototype), while in the left is a T72. Both tanks were restored with funds from private citizens, those people also ensuring the delivery to the museum.