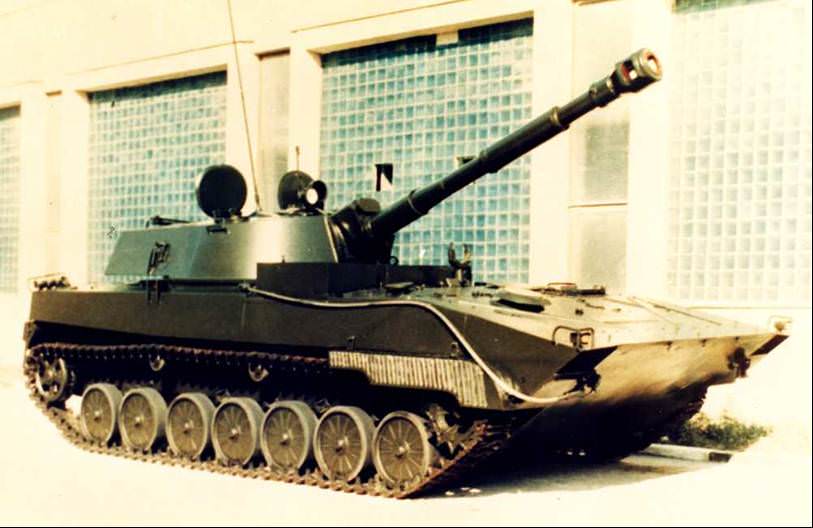 Starting in the 1950’s, the Republica Populară Română (English: ‘Romanian People’s Republic’) tried to lessen the mighty Soviet economic and cultural grip as a response to Nikita Khrushchev’s de-Stalinization campaign. After Gheorghe Gheorghiu-Dej, leader of the Romanian People’s Republic from 1947 to 1965, died in 1965, a new more ambitious leader came onto the scene. Nicolae Ceaușescu, leader of the newly renamed Republica Socialistă România (English: ‘Socialist Republic of Romania’), would rule from 1965 until the fall of the Partidul Comunist Român (English: ‘Romanian Communist Party’) in 1989. Early on, Ceaușescu made efforts to distance the nation from the Warsaw Pact. His biggest opportunity to do so came during the 1968 Warsaw Pact invasion of Czechoslovakia, known as Operation Danube, which lasted from August 20 to 21. On August 21, 1968, Ceaușescu gave a speech denouncing the invasion and de facto asserting the independence of the Socialist Republic of Romania from the Soviet Union.
While still formally in the Warsaw Pact, Romania gained a new level of autonomy due to Ceaușescu’s efforts to distance the country from the Soviet Union. As a result, the nation felt the need to become more militarily independent, produce weaponry within its own borders, and even to seek assistance from the West and China. While complete autonomy was not an easily achievable prospect, especially for a nation such as Romania, they had to occasionally rely on its Warsaw Pact allies for equipment and technology. Nevertheless, the effort was a great one of which lead to the creation of the Model 1989 and various other domestically produced Romanian armored vehicles.

If It Ain’t Broke, Continue Fixing It…

The Obuzierul autopropulsat românesc, Model 1989 (English: ‘Romanian self-propelled howitzer, Model 1989’) or simply known as the Model 1989, is a Romanian self-propelled howitzer based on both the MLI-84 and the 2S1 Gvozdika.
As with many domestically produced vehicles from the Socialist Republic of Romania, the Model 1989 is one example of many Romanian license-produced vehicles featuring design changes that seem to offer no real advantage over the original like the MLI-84 which is essentially slightly longer BMP-1 clone with a marginally more powerful engine. However, in the case of the Model 1989, the MLI-84 elements such as the suspension were likely used to ease production.
Prior to the Model 1989, Socialist Romania’s Forțele Terestre Române (English: ‘Romanian Land Forces’) were never equipped with any turreted self-propelled artillery. In 1978, the Romanian Command of Artillery was tasked with the job of figuring out how many domestically produced modernized artillery pieces were going to be needed from 1978 to 1990. It was concluded that 1205 122mm armed self-propelled artillery pieces were going to be needed, likely having the Soviet Union’s 2S1 Gvozdika in mind. These vehicles were destined for artillery battalions within mechanized regiments.
As a result, Romania ended up ordering an artillery battery from the Soviet Union consisting of six 2S1 Gvozdika self-propelled artillery pieces without fire control systems in 1987 and received them in 1988 according to the SIPRI trade register. They were designated as the ‘Obuzierul autopropulsat 2S1’ in Romanian service. 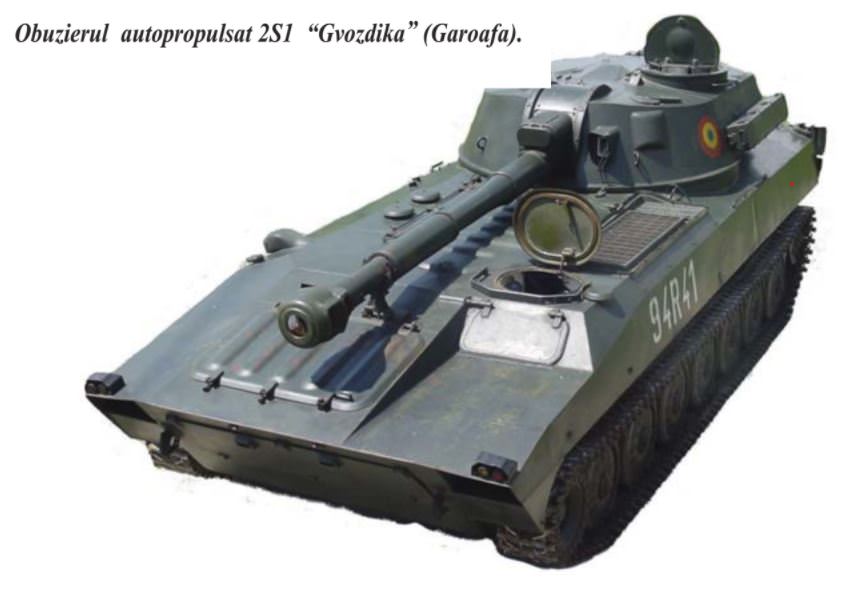 2S1 under Romanian service. Source: Artileria Română În Date și Imagini
Between 1987 and 1992, the Socialist Republic of Romania built 2S1s under license even after the fall of the socialist regime in 1989. These were the Model 1989s of which 42 were made. The hulls were built at the Mizil factory where the MLI-84s were also built. However, the turret was imported from the Soviet Union along with the 122mm 2A31 gun it was equipped with, which was redesignated as the A565. The SIPRI trade register, a less reliable source, claims that forty-two 2S1 turrets meant for installation on the Model 1989s were imported from the People’s Republic of Bulgaria.
After the fall of the socialist regime in Romania in 1989, the Model 1989s the Model 1989s saw use from 1990 until 2005 when they were put in storage. During this period, 24 Model 1989s saw use by the 25th Artillery Battalion of the 22nd Tank Brigade and 22 Model 1989s plus the six 2S1s were used by the 55th Artillery Battalion of the 6th Tank Brigade.

Model 1989s stored away. Take note of the center left Model 1989 with a rounded rear access door resembling the type used on the MLI-84. Notice the SU-100 tank destroyers on the left. Source: cartula.ro 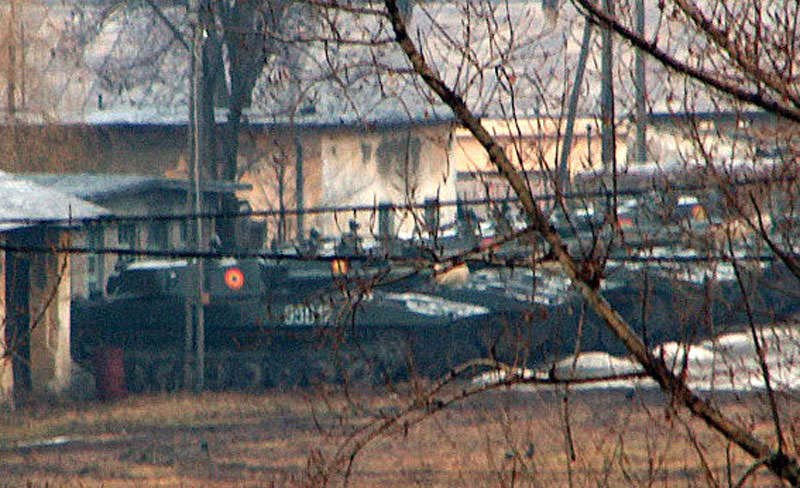 If compared to an MLI-84, it appears to be a lengthened version of it with an extra roadwheel on each side, single door rear entrance instead of two doors and various minor differences.
Compared to the 2S1, the Model 1989 features shorter side hull walls due to the greater amount of area the suspension takes. The front features a much more prominent angled hull extending further outwards. It also lacks a driver’s window and an indentation for the driver’s window on the left.
The 122mm A565 is 38 calibers long and uses compatible ammunition with the Soviet-designed towed 122mm D-30 howitzer. It can fire High Explosive shells (HE), High-Explosive Anti-Tank rounds (HEAT), illumination rounds, and smoke rounds. The Model 1989 carries 40 rounds in total, 35 HE and 5 HEAT rounds. The HEAT rounds have a maximum effective range of 2000 m and the 122mm A565 has a maximum range of 15.2 km. The turret is able to rotate a full 360 degrees and the 122mm A565 can depress -3 degrees and able to elevate +70 degrees. Night vision systems are also installed.
The Model 1989 consists of a crew four; the driver, gunner, loader, and commander. The driver is located to the left of the engine near the front of the vehicle and the gunner, loader, and commander are in the fighting compartment at the rear, which they can enter through the rear entrance.

Illustration of the Obuzierul autopropulsat românesc, Model 1989 by Jaroslaw “Jarja” Janas. This illustration has been sponsored by Golum through our Patreon page 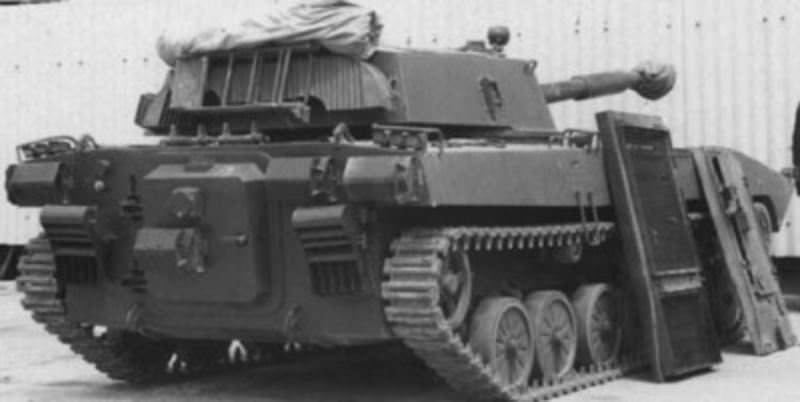 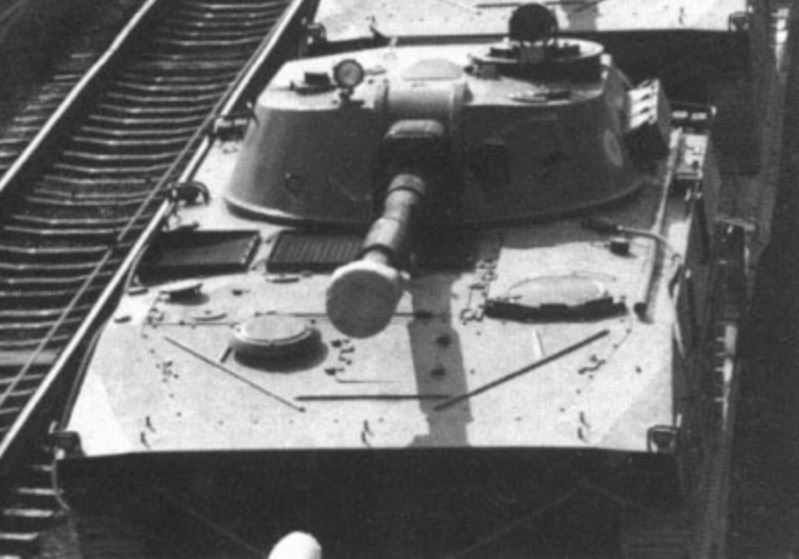 Top view of the Model 1989 showing the engine deck and hatches. Source: valka.cz
The engine the vehicle uses is currently unspecified, but it is most likely equipped with the MLI-84’s 360 hp 8V 1240 DTS engine. The placement and design of the vents allude to the possibility of being equipped with this engine as they are a very similar type used on the MLI-84. The Model 1989 has a maximum speed of 64 km/h, can climb slopes of 35 degrees, has a range of 450 km, has amphibious capabilities, and consumes 200 liters per 100 km. It weighs 18.3 tonnes, is 7.505 m long, 3.15 m wide, and 2.72 m tall. The Model 1989’s suspension is very reminiscent of the MLI-84’s suspension. The road wheels, idler wheels, drive sprockets, and return rollers seem to have been borrowed from the MLI-84. The 2S1 on the other hand lacks return rollers. Seven road wheels are located on each side connected to torsion bars, with the idler wheels at the rear, drive sprockets at the front, and three return rollers on each side. The cluster of five road wheels are located at the front with a pair of two at the rear on both sides, unlike the 2S1’s uniform roadwheel spacing.
In the first image in this article, the Model 1989 appears to have an idler wheel borrowed from the 2S1.
The armor is only effective enough to protect from small arms fire and artillery shrapnel. Side skirts are provided for the frontal portion of the vehicle and are stored away at the rear of the turret. The vehicle is also NBC protected. 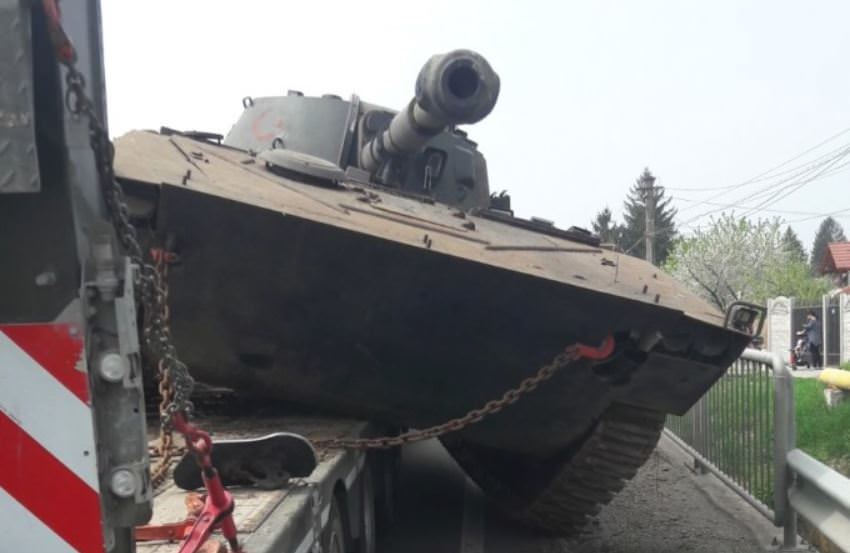 A recently surfaced image (relative to the publication of this article) of the rarely photographed Model 1989 seen in an accident. The accident has fractured the thinly armored lower front hull. Source: Pro TV

Romania never came close to their desired goal of 1205 122mm armed self-propelled artillery pieces, but at the very least they attempted to fill a gap in their military. Till this day, the Model 1989s still haven’t been decommissioned, but are instead stored away. This might seem like the end of the vehicle’s career waiting to be sold off or scrapped, but there seems to be some hope for the Model 1989. According to an unverified source, the Model 1989’s chassis may be used as the basis for the MLI-84M mortar carrier. If the claim is true and if the conversion takes place, the service life of the vehicle could potentially expand for decades to come.

Modern photo of the Model 1989 showing the right side of the vehicle. Source: MFA 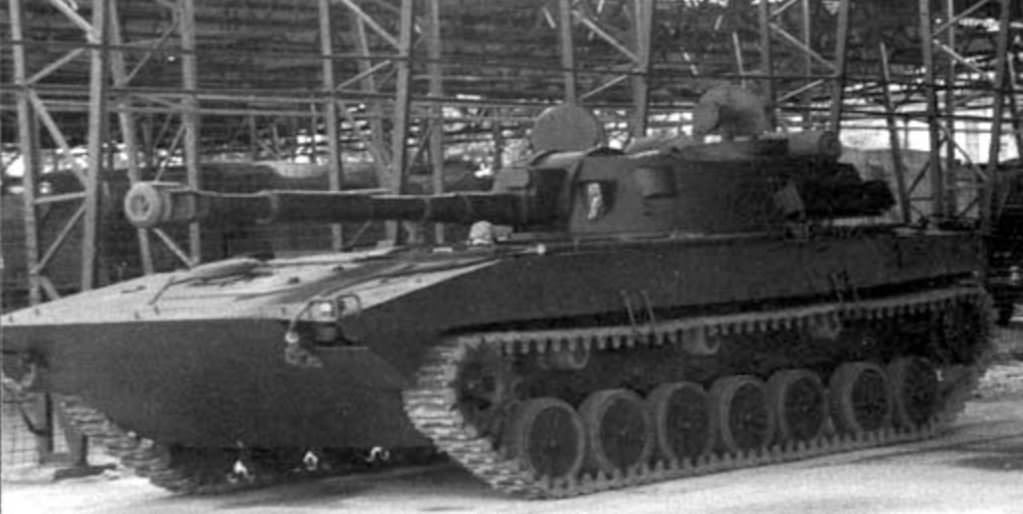 Contemporary photo showing the front-left side of the vehicle. Source: valka.cz 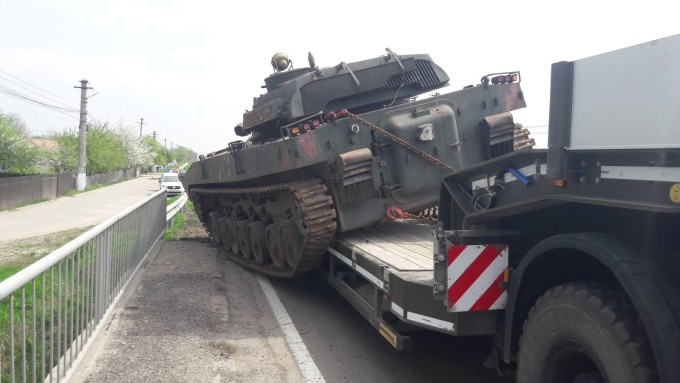 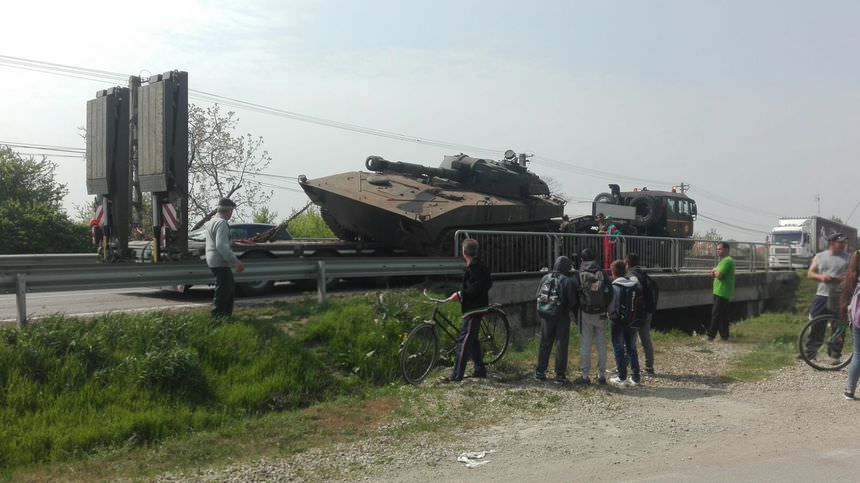 More images of the Model 1989 from the accident mentioned earlier. Take note of the left image where the rounded rear access door is seen. Source: Pro TV

That’s not correct; the Romanian Army used soviet build SU-76 and ISU-152, those were possible still in use in the mid 80s.

Article its true we have them and store them …. Now scrap yard