In the mid-1990s, the prevailing trend for vehicles in the United States Army was for them to be capable of ‘Rapid Reaction’. Put simply, this was the ability to be deployed wherever needed, in the shortest time possible, often relying on airborne deployments. As well as armed and armored vehicles, this need also translated to engineering vehicles. The Deployable Universal Combat Earthmover M105, otherwise known as the ‘DEUCE’, was born out of this need.

The M105 was brought into existence to replace the veteran Caterpillar D5 Bulldozer and, to a lesser extent, supplement the somewhat loathed M9 Armored Combat Earthmover (ACE). The M105 is a much lighter vehicle than the other two vehicles and it is air-transportable, self-deployable (meaning it can be driven to where it is needed) and air-droppable. It can be deployed alongside airborne troops and is fast enough to re-deploy from task-to-task without the need of a separate transporter vehicle.

This high-mobility dozer emerged from the partnership between the Tank-Automotive and Armaments Command (TACOM) of Warren, Michigan, and the Defense and Federal Products department of the construction industry giant, Caterpillar Inc, based in Mossville, Illinois. Development of what would become the M105 started in late 1995. This initial vehicle was known as the 30/30 Engineer Support Tractor. The ‘30/30’ designation came from a 30 mph top speed, and a total weight of 30,000 pounds. This vehicle was expensive, however, and due to budget cutbacks of prospective buyers, Caterpillar never received an order. As such, just one 30/30 prototype was built. In 1996, Caterpillar came back with a revised design. This design was agreed upon and it was serialized as the M105. Caterpillar were then granted a contract for construction, with the dozers costing $362,687 each. The vehicles finally entered service in 1999. Approximately 227 M105 have been produced and are currently in service with the United States Military. A small number have also served with the British Army.

The DEUCE didn’t change much from its 30/30 EST dozer origins. The vehicle is extremely compact in its design at 19 feet 3 inches (5.8 meters) long, 9 feet 7 inches (2.9 meters) wide, and 9 feet 1 inch (2.7 meters) high. It weighs 17.5 tons (16.1 tonnes). This is heavier than the larger M9, but this is mostly due to the fact that the M9 was largely hollow. The DEUCE is a one-man vehicle, operated from a cab at the front of the dozer. The dozer’s blade is located underneath the cab, with the engine and running gear towards the rear.

The DEUCE is air deployable and can be carried by C-130 Hercules, C-141 Starlifter, C-5 Galaxy or C-17 Globemaster cargo aircraft. It can also be air-dropped via parachute from a C-130.

Whereas the M9 ACE was designed to operate in combat conditions, the M105 was not. The DEUCE was intended for behind-the-lines work, such as flattening ground for roads or clearing areas for building construction. Due to its intended use, the M9 was at least partially armored. Aside from what may be ballistic glass on the cab (at the time of writing, it is unclear whether it is standard safety or ballistic glass), the DEUCE is completely unarmored.

The M105 is far easier to control than previous dozers operated by the military. Inside the air-conditioned cab, a steering wheel and foot pedals, much like a military truck, can be found. This was purposely designed so regular infantrymen would find it easy to control and operate the vehicle without needing to be a specialized vehicle operator. The vehicle is unarmed, but there is a bracket in the cab for the operator to store his personal weapon. The operator gains access via a door on the left side of the cab. There are a total of five windows at the front of the cab. The central window is the largest and is fitted with a powered wiper. The door on the left and the right wall of the cab each have single opening windows. There is one more window behind the driver’s seat that is protected by reinforced wire mesh to protect it if the winch cable breaks and snaps back. There are also rear-view mirrors on the right and left the side of the cab.

The headlights are built into the roof of the cab, just above the windscreen. The dozer’s tail lights can be found above the sprocket wheel, built into the end of the running board/fender that extends along the length of the suspension, and across the rear of the vehicle. There are two more headlights at the front of the fender, near the cab.

Like many combat dozers, the blade allows the M105 to carve out hull-down positions for tanks, dig gun emplacements, perform route denial (creating and filling anti-tank ditches), improve bridge approaches, or even flatten ground to pave roads or airstrips.

The blade is shallow and approximately track-width at 9 feet 7 inches (2.9 meters) across. The blade is hydraulic and can move on 3 axes: horizontal, vertical and diagonal. It is known as a ‘6-way’ as it can move up and down, be tilted left or right, and either the left or right edge can be extended forwards for ‘V-cuts’. It is also known as a ‘Power/Angle/Tilt’ or ‘PAT’ blade. It is unclear at this time how much vertical travel the blade has, but there are cutouts under the cab to allow room for the hydraulic rams.

At the rear of the vehicle, located between the drive sprockets, is a powered winch capable of pulling 22,000 lb (9,979 kg) with a 180 foot (55 meter) long cable. This can be used to assist in the recovery of allied vehicles or to pull itself free if it becomes stranded in soft ground, for example. Underneath the winch is a pintle-mounted towing hook. This is mostly used to pull trailers.

A high degree of mobility is what makes the M105 stand out from previous combat dozers. The dozer is propelled by a 7.2-liter Caterpillar 3126 turbo-charged diesel engine with Hydraulic Electronic Unit Injector and dual power settings. This is because the dozer can be driven with the 6-speed transmission in automatic or manual. The vehicle operates in two modes: self-deploy and earthmoving. These are toggled on the dashboard. In self-deploy (ie, driving) mode, the engine cranks out 265 hp with the transmission set to automatic. In earthmoving, this is reduced to 185hp with the transmission in manual. This allows the high-torque required for dozing or towing. In self-deploy mode, the DEUCE can travel at a top speed of 30 mph (48 kph). The engine is located at the rear of the vehicle, behind the cab. The engine compartment is the largest part of the vehicle, forming around 70% of its structure. The exhaust emerges on the left side of the engine deck, roughly halfway down its length.

The suspension and running gear has the orientation of a Scalene triangle (a triangle with no equal sides). The sprocket wheel – which is visually similar to the sprocket wheel on the WW2 M3 half-track – is located high and rear, while the idler at the front also performs the role of a road-wheel. There is another larger roadwheel underneath the drive wheel taking the bend of the track. This wheel is attached to a suspension arm connected to a torsion bar. In between the two larger road wheels are two, double wheel bogies. This means six road wheels are in contact with the track at all times. Numerous scrapers are placed around the running gear to stop mud building up.

The track is steel reinforced rubber. This is lighter and is less damaging over time to the wheels. Full rubber tracks are also far less damaging to concrete surfaces. They are also easier to replace and transport.

The 10th Mountain Division (Light), based at Fort Drum, New York were the first to receive the M105 DEUCE, with the vehicles arriving in May 1999. Other units followed, such as the 82nd Airborne Division, and the 20th Engineer Brigade. The first deployment of the M105 was during 2001, in Afghanistan, as part of Operation Enduring Freedom (part of the War on Terror following 9/11). The Deuces stayed in the Middle East, both in Afghanistan and Iraq, supporting American troops and assisting in the construction of roadways, building areas and fire-bases. In some cases, they would work alongside the M9 in safe locations, but not in combat action.

The M105 has also been stationed in Kosovo as part of ‘KFOR’ or ‘Kosovo Force’, the NATO peacekeeping mission that followed the Kosovo War (1998-1999). This peace-keeping mission is still active today, and around 650 US troops are stationed there, as well as troops from other NATO countries.

The only state the M105 has been exported to is the United Kingdom. A total of 15 DEUCEs (the amount they were purchased for is unknown) are in service with the Royal Engineers. In the British Army, plant and construction vehicles are known as ‘C vehicles’. The M105’s were placed in service with the 39th Engineer Regiment Royal Engineers, the 13th Air Assault Support Regiment, and the 9th Parachute Squadron, Royal Engineers. They were used by the Engineers in Kabul, Afghanistan, to clear wreckage from the Airport.

At present, the personal opinion of troops that have operated the DEUCE is unknown, so we do not know whether, in the eyes of the troops at least, the DEUCE has proved to be a worthy replacement for its older D5 brother. The general consensus, however, is that they are a big improvement over, and are far more reliable than, the M9 ACE, although that troublesome vehicle is still in service after an upgrade program. The M105 remains in the arsenal of battlefield engineers. To add to this, they have already built up a reputation for being far more reliable than the ACE.
Recently, a number of DEUCEs have found their way onto the surplus market. Some of these have even been repainted into the classic Caterpillar yellow and black livery. So, if you have approximately $10,000 spare, you could very easily pick one up for yourself! 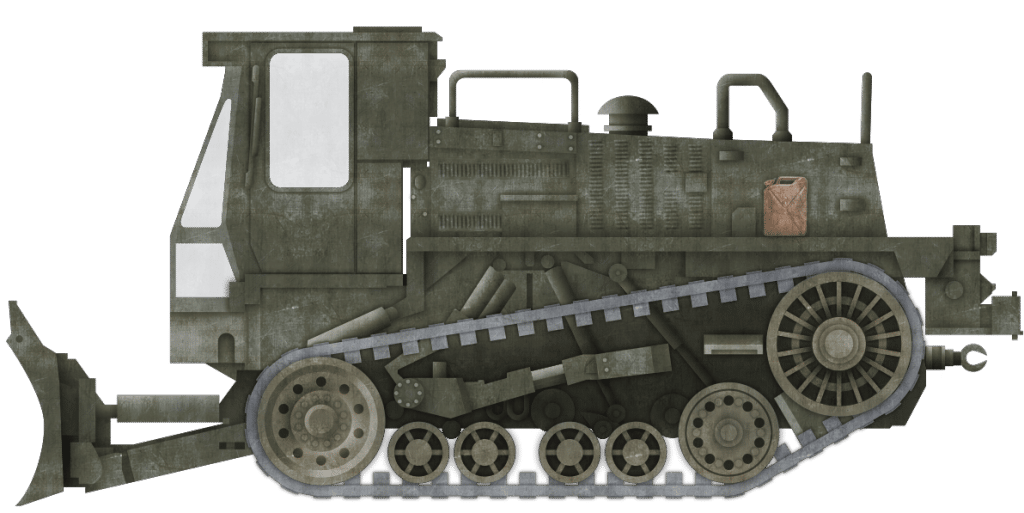 The M105 Deployable Universal Combat Earthmover (DEUCE) in its standard configuration, painted in the standard American ‘Olive-Drab’ scheme. This is the most common appearance of the M105. 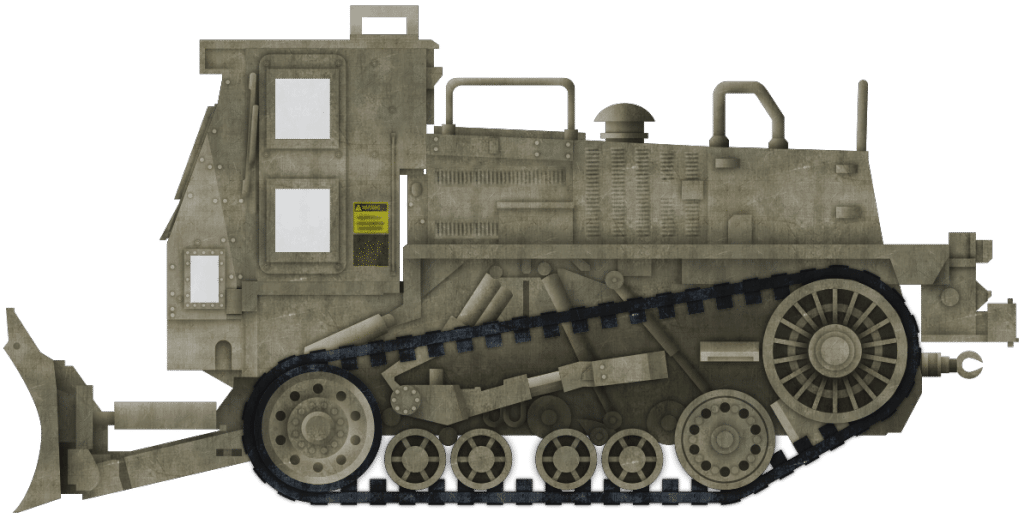 The rare, up-armored M105 that served in Afghanistan. This representation is based on one of the only known photos of such a vehicle which can be found below.

Both of these illustrations were produced by Bernard ‘Escodrion’ Baker, funded by our Patreon campaign

WOW! this is the best information I’ve found on the Deuce since I started triing to build the CAT. Now if I could get drawings in 1/35 scale!.

This website uses cookies to improve your experience while you navigate through the website. Out of these cookies, the cookies that are categorized as necessary are stored on your browser as they are essential for the working of basic functionalities of the website. We also use third-party cookies that help us analyze and understand how you use this website. These cookies will be stored in your browser only with your consent. You also have the option to opt-out of these cookies. But opting out of some of these cookies may have an effect on your browsing experience.
Necessary Always Enabled
Necessary cookies are absolutely essential for the website to function properly. This category only includes cookies that ensures basic functionalities and security features of the website. These cookies do not store any personal information.
Non-necessary
Any cookies that may not be particularly necessary for the website to function and is used specifically to collect user personal data via analytics, ads, other embedded contents are termed as non-necessary cookies. It is mandatory to procure user consent prior to running these cookies on your website.
SAVE & ACCEPT
148 shares