After the First World War, most nations started looking at their armed forces, specifically to how advances in weapons technology affected the way they would and could fight. The Japanese were no exception, especially in armored vehicle development. In many respects, the Japanese Army avoided many of the dead ends that other nations experienced and arguably came closer to getting armored warfare right than any other nation. This was quite likely an accident forced upon the Japanese by circumstances.
One of the few dead ends that the Japanese did encounter, however, was the multi-turreted tank, the Mitsu-104, which was most likely a development of the Type 97 Heavy tank, which was the one heavy tank the Japanese had that went into service. 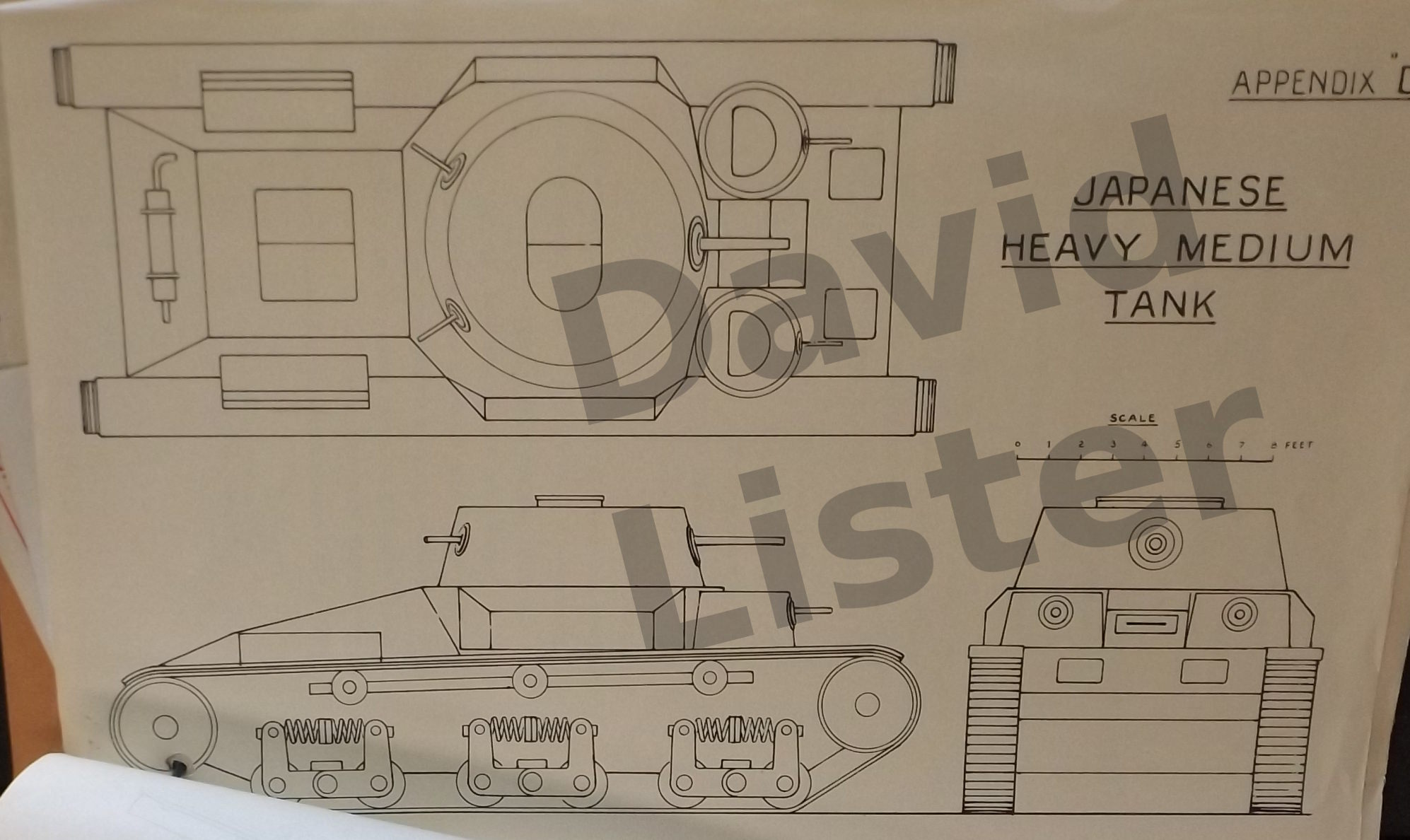 Schematics of the Mitsu 104 Heavy Medium Tank found in the UK National Archives.

All the information on the Mitsu-104 comes from a British military intelligence dossier on enemy tanks, which was compiled between January 1939 and March 1943. This information was then later passed on to the rest of the Commonwealth and the United States, who included it in their own enemy equipment handbooks that were issued to the armed forces.
The British information came from original Japanese documents, obtained before the Second World War, although no details of where or how these documents were obtained is included in the files. The paper type and size are all identical to the Japanese standards used at the time, both of which were different from the conventions used by the British, all of which implies that the documents are original, and thus credible.
There does appear to have been some confusion within the documents about the exact location of weaponry on the tanks though. This is likely because of some inaccuracies in the Japanese text, which again raises the mystery about where the documents came from. Despite this, the translations includes original, archaic Japanese measurements (which are re-created in the specifications table).
The British documents describe the Mitsu-104 as a ‘Heavy Cruiser’, despite the fact that Japanese documents clearly referred to it as a Heavy.

Drawing of the Mitsu 104 from a Swedish intelligence document. Source

Japan spent a large part of the 1920’s obtaining examples of foreign armored vehicles and concepts. One such example is the A1E1 Independent, which the Japanese obtained plans for. This resulted in the Ishi-108. One of the few failures of tank design the Japanese picked up was the idea of multi-turreted tanks. This likely came from their interest in the British A1E1 Independent and the Soviet T-28 tanks.
Multi-turreted tanks are almost universally considered to be a bad idea because they add weight to the tank from items such as gearing and the structure required to mount a turret as well as making the vehicle much harder to command. On a single turret tank, this weight could be used for more armor or bigger guns and engines. Multiple turrets also comprise the armor integrity by having a series of holes in the armor to mount the turrets. 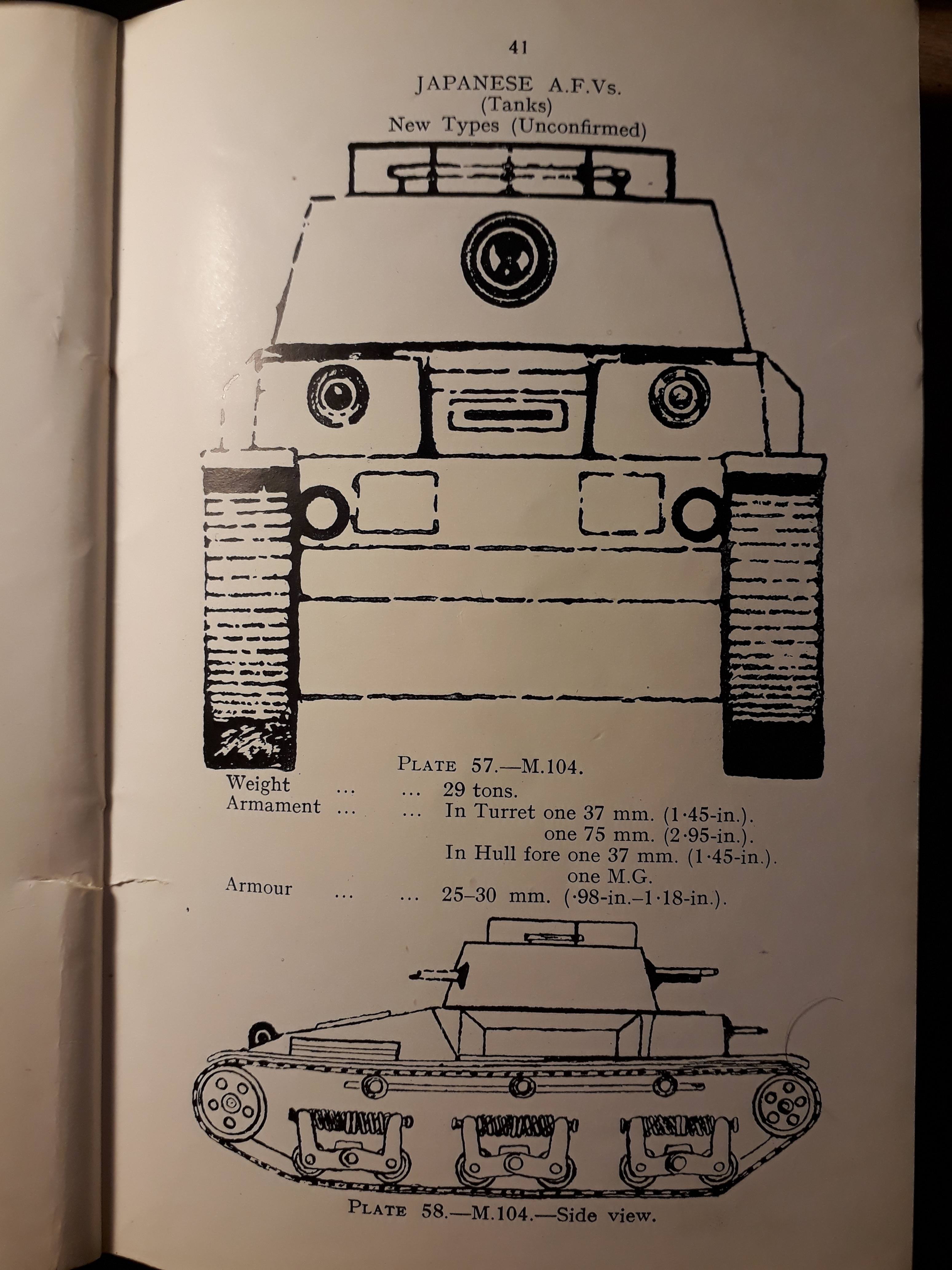 The Mitsu 104 from a 1944 British-issued recognition handbook on Japanese equipment.
This unfortunate trend in design existed in all the Japanese heavy tank projects, apart from the AI-96 from 1936.
One such multi-turreted design was the Mitsubishi 104, which is shortened in the documentation to “Mitsu-104”.
There seems to be no evidence the Mitsu-104 was ever built, unlike the Type 97 Heavy Tank. Design wise, it seems to have been a logical development of the Type 97, looking far more refined and capable, although the exact date of the tank’s design is unknown.
The Mitsu-104 had three slightly conical turrets. The main turret mounted a 75mm low velocity gun possibly based off one of the Japanese field artillery guns of the same calibre. Two sub-turrets were mounted on the front hull, each with a machine gun. 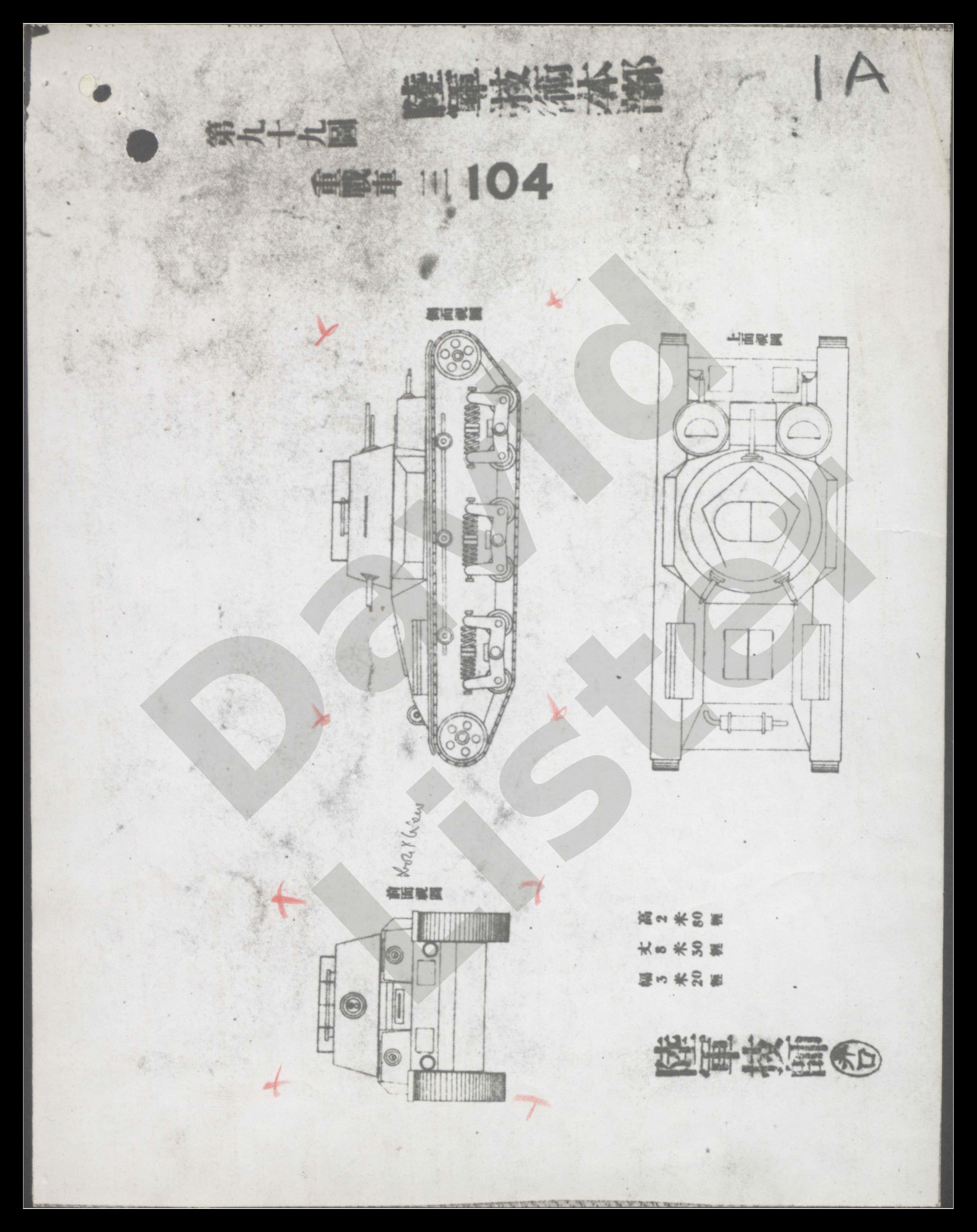 Original Japanese drawings of the Mitsu 104 found in the British National Archives.
There was some confusion about the armament for the tank. A pair of 37mm guns were listed, however, the British were confused as to their location. The Type 97 Heavy tank from 1937 had the option of two 37mm guns or a single 75mm guns mounted in the turret. This is likely because the Japanese considered the heavy tanks for the support of the infantry, and in the Japanese military 37mm guns were called ‘rapid fire infantry guns’. The British documents suggest the Mitsu-104 could have had 37mm guns in the sub-turrets, which certainly look big enough to mount such a weapon. This could, of course, be a translation mistake for the twin guns in the main turret.
The rest of the hull was conventional in its layout with the engine at the rear of the tank. Although the tank is rather wide for its size.
The suspension was the same style of Bell Crank suspension used on most Japanese tanks of the period and indeed lived on until the failed O-I Super Heavy Tank design.

Both illustrations are by William ‘Richtor’ Byrd, funded by DeadlyDilemma through our Patreon campaign 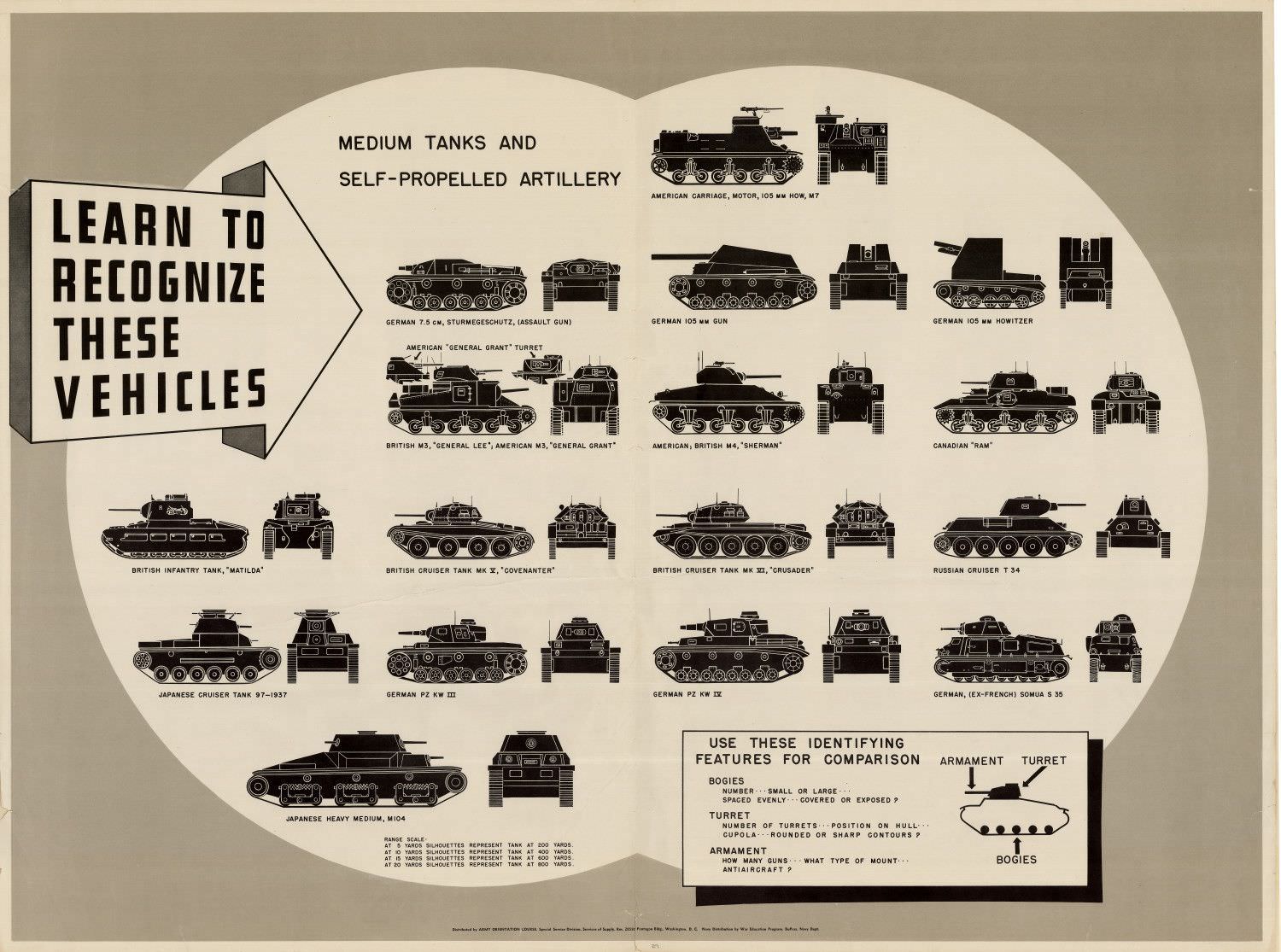 The design, from the particulars written down, does seem to be over-optimistic in regards to its mobility and speed. This was a common fault with Japanese heavy tank plans, with tanks such as the Ishi-108 and O-I having suspiciously overinflated claims of speed from engines that seem to produce far too little power to propel such masses at such speeds. For example, a 30 ton Sherman tank with a 350hp engine could obtain about 22mph. The Japanese predicted that the same power output would move the 29 ton Mitsu-104 at 30mph. To achieve similar figures, a Sherman needed over 400hp. 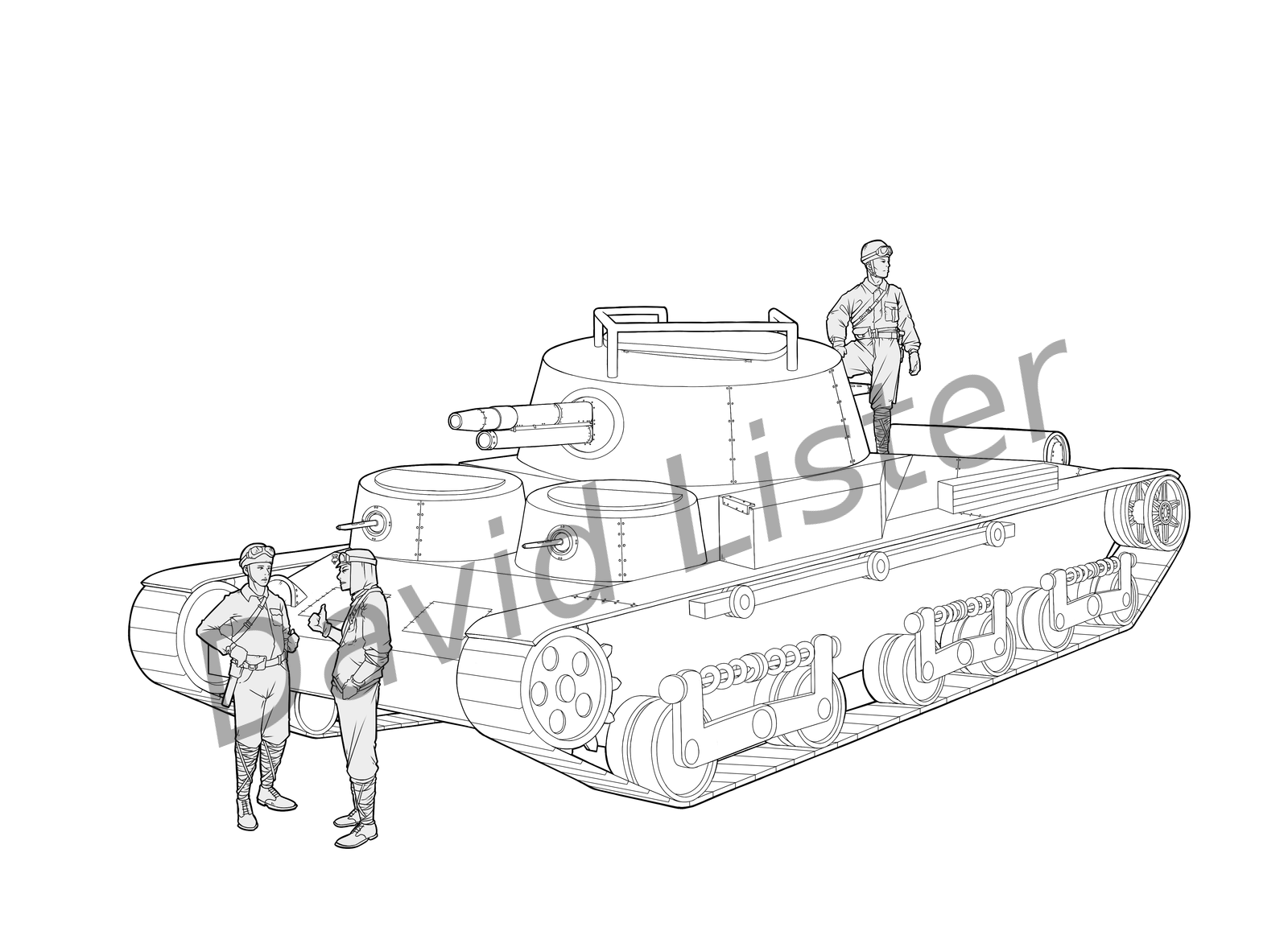 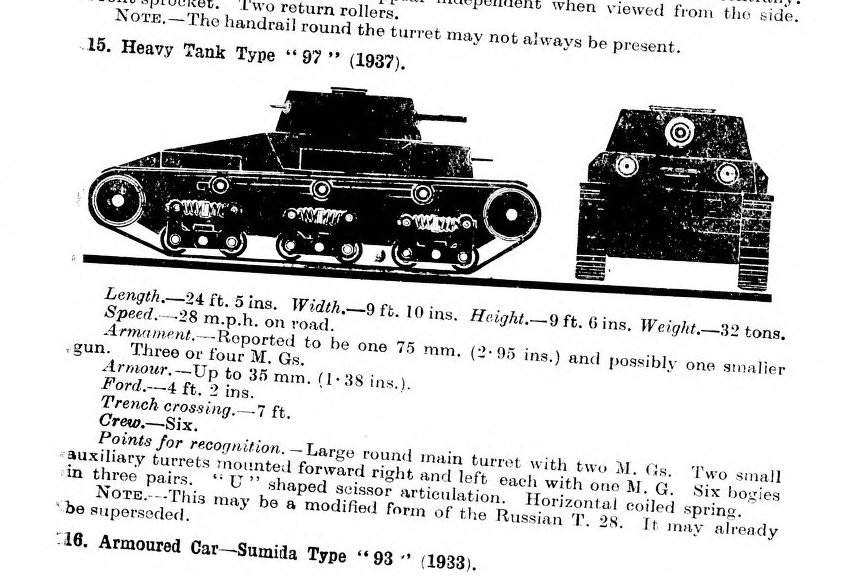 The Mitsu 104 being mentioned in the Japanese military forces. Report No. 12-b(11), USSBS Index Section 6.

Excellent article, very well written and explained. I’d like to know if there will be future articles on the Ishi-108 and type 96 and 97 tanks, since these tanks generally are discussed with the Mitsu-104 in the foruns. Also, and I am aware of all the obscurity regarding it, any chances of writing about the so called Type 2604/2605 in the near future?

Dave Lister, the author of this article, has a book coming out soon on the subject. It’s called Forgotten Tanks and Guns of the 1920s, 1930s, and 1940s, and should include the three Japanese heavy tanks you mentioned. Once the book is out articles including part of the information will probably appear. As for the Type 4/5 Heavy, unless further information comes out we have assumed it to be a fake.

Thanks for the answer, I was aware of the upcoming book but I didnt know it would include the tanks I mentioned. Regarding the type 2604/2605, indeed having only a rough sketch as basis is at least very scarse.

My bet is that the Mitsu-104 was obtained by espionage. I can’t really see how else British obtained it.

I really have no idea, I wish I did because the implication seems to suggest its one hell of a story.

So the specification box says the armor was up to 30 mm, but that Swedish intelligence paper says up to 65 mm? What is it, and why the discrepancy?

What I think happened, although I don’t have any evidence to back it up. The Japanese heavy tank construction had a habit of creating an armoured box only half the desired thickness. Then they’d bolt the other half on as a separate sheet later. The UK document was raw intel, and only had the armoured box figure. The Swedish document is intel that has been sifted and analysed, and cross referenced, and so has the total figure.