World ff Warships has announced that the legendary cruiser Belfast is making a return alongside the new US Battleship Oklahoma.

Earlier this Summer Wargaming announced the controversial development of a split for the United States Battleship line which has garnered much controversy especially in regards to the fact that it is the US getting another line while Italy and several other nations are still missing most of their lines and the ships themselves leave much to be desired stats wise. However hot on the heels of than announcement Wargaming also announced that with the release of ST 0.9.8 two new premium ships would be implemented into the game, a Battleship and Light Cruiser by the names of USS Oklahoma BB-37 and HMS Belfast 1943! Both of these ships came as a shock especially the Belfast which was formerly a tier VIII premium cruiser removed due to many factors including the fact that it could not be easily balanced, the new Belfast however sits a Tier VII oddly enough. Oklahoma on the other hand was also a much-requested ship by fans of the USN due to in no small part her Pearl Harbor connection but also due to the fact that the Nevada class had not been represented in-game up until now. And now without further ado the information and stats of each vehicle. 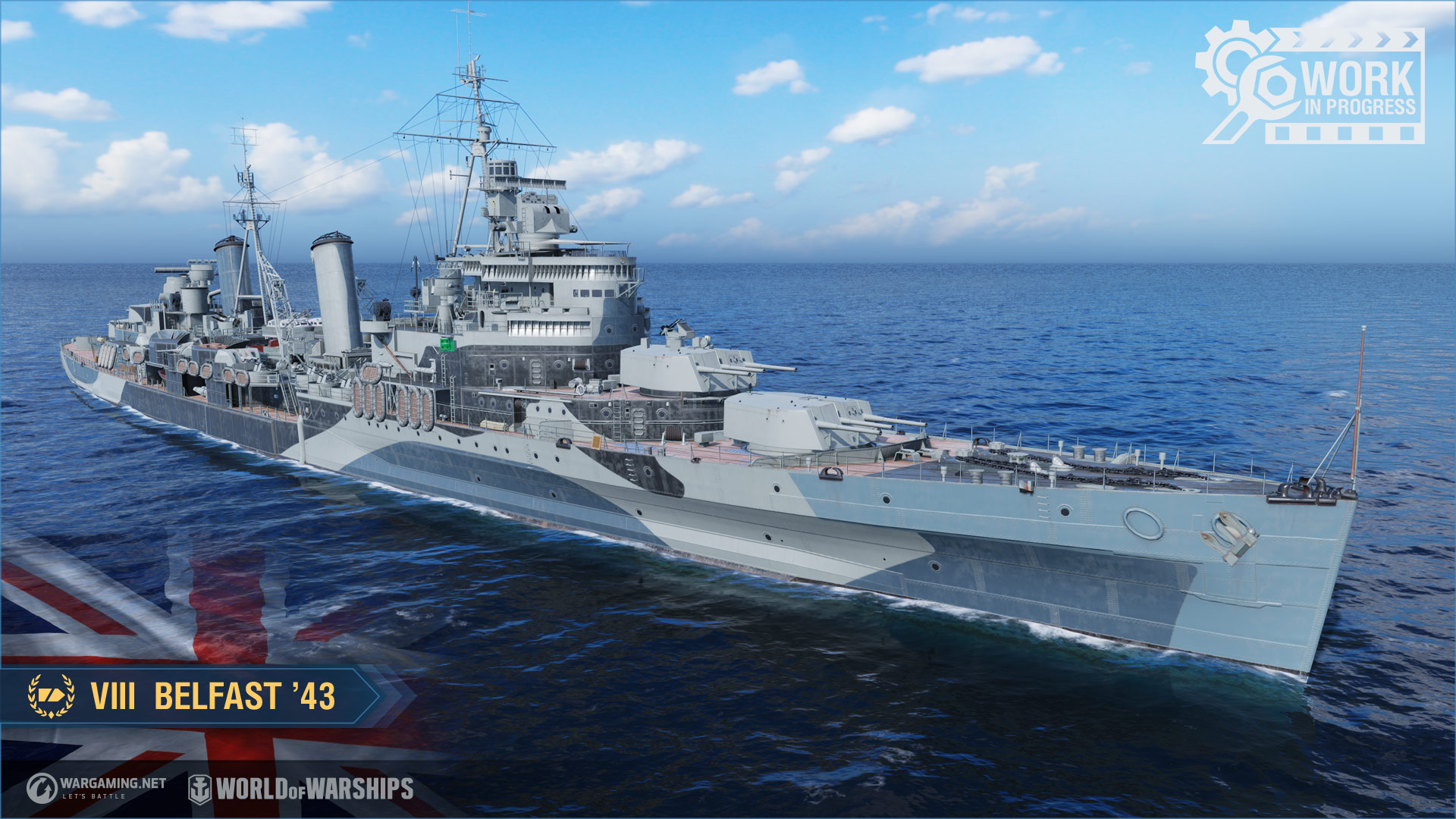 The 1943 refit the Edinburgh (Town) class light cruiser represents the famous HMS Belfast as she would have appeared in1943. Her model differs from the one of the Tier VIII cruiser "Belfast" in that she has a higher number of dual-purpose guns and AA mounts, a slightly different superstructure arrangement and a Fighter catapult as well as actual torpedo tubes (The Previous Belfast was depicted in her 1950s fit after the torpedo tubes had been landed and the ship heavily refitted). The ship is equipped with 4x3 152 mm guns with powerful HE shells, a torpedo armament with the ability to launch individual torpedoes, decent concealment, a "Short-Burst Smoke Generator" consumable, and a "Surveillance Radar" consumable with the 9 km ship detection range.

Thanks to her good concealment and "Surveillance Radar" consumable, Belfast '43 can help allies in fighting for capture points as well as hunting for destroyers. Her special Smoke Generator - with its shorter reload and smoke screen dispersion times - will be useful when there is a need to retreat, but it, unfortunately, does not allow her to effectively fire at targets from inside the smoke. 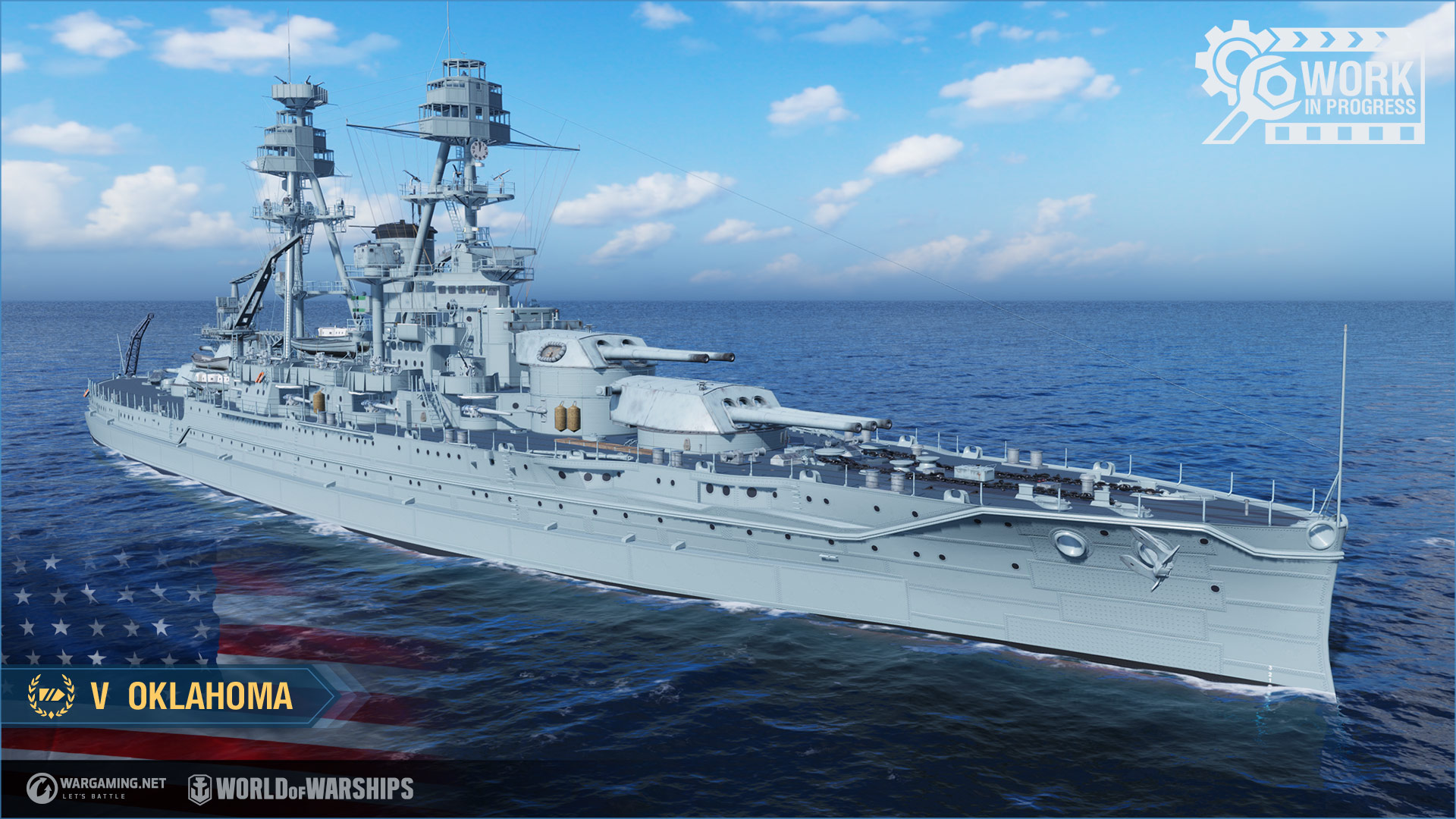 The USS Oklahoma is a Nevada class battleship with a rather interesting turret layout as well as an impressive range for her tier. Her guns consist of 3x2 and 2x2 356mm (14”) Naval guns in two triple and two double turrets. She is most infamously known for being present at Pearl Harbor on December 7 1941 and sinking after taking six torpedo hits (including two possibly from a Type A Kō-hyōteki-class Mini sub). She was later salvaged but deemed too expensive to repair and was stripped of all armaments before being sold for scrap in 1947. In a twist of fate, however, she sank on her way to San Francisco in a storm 804 kilometers (500 miles) off the coast of Hawaii.

The ship has classic and very well-known American Battleship features including an enhanced "Repair Party" consumable, high damage per salvo, and low speed (Due to the fact that she is a Standard class Battleship/dreadnought).  Due to her decent firing range, which can be increased to 19.9 km by the "The Artillery Plotting Room Modification 1" upgrade, Oklahoma can effectively fight at long distances. And if she must engage in close-range combat, secondary guns with good accuracy for the tier will be of great use for her.

The Stats are as follows

Once again as usual please note that all information in the development blog is preliminary and subject to change during testing. Any showcased features may or may not end up on the main server. The final information will be published on the World of Warships' main page if and when the ship is released.

Rss feed of the article's comments