Patents are odd things. Some of them are clearly insane flights of fancy devoid of common sense or actual use, and some are solid renditions of actual designs which get built. A third type is where the inventor has an idea which seems good on paper, but would not be usable in the real world. The Calisi trench crossing armored car is one of those ideas.

Side views of Calisi’s War Car showing the rails in the raised and lowered positions. Source: Patent: US1307238

The Inventor and the Design

Adriano Calisi was an Italian citizen living in Waterbury, Connecticut, when he submitted a patent application on the 18th January 1919. He came up with the idea of combining the road speed of an armored car with the off-road abilities of a tracked vehicle. The concept was fairly simple on paper. A wheeled armored car (he called them War Cars) carrying a pair of rails ahead of it on supporting ‘arms’.

With the rails secured in place, the War Car is free to drive around unhindered by them during normal operation. Upon meeting an obstacle, such as a ditch or trench, though, the crew would lower (by means of chains), these rails to cover the gap. The chains used to move the rails go inside the vehicle and connect to a winch linked to the engine inside the vehicle. The vehicle then crosses the gap over the rails with the rails still attached by chains which spool out as the vehicle moves forwards. 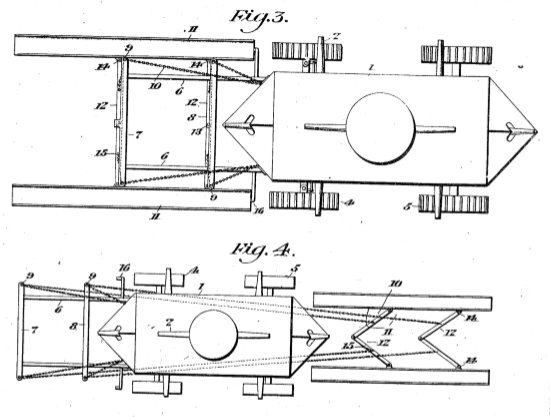 Calisi’s design from above showing the steps of using and then recovering the rails. Source: Patent: US1307238

Illustration of the Calisi Armored Car by William ‘Rhictor’ Byrd, funded by our Patreon Campaign.

So, the vehicle has crossed the trench and needs to recover those rails safely. This is done simply and elegantly by winding back in the chains. The chains are affixed to two points on the supporting struts on the rails and those struts are hinged in the middle. When the chains are pulled back, the hinge gives and the supporting struts fold up to now be narrower than the distance between the front wheels. Pulled all the way back to the front they are then lifted and resecured into position ready to be used the next time.

The problems with the idea are obvious. Firstly, those rails projecting from the front would themselves be subject to damage and loss as they are very vulnerable to the effects of rough terrain or enemy fire. The idea of stopping to recover the rail afterwards means you have to stop on the enemy side of the obstacle just to recover this bridge – this means the next vehicle would have to do the same and so on. All this potentially while under enemy fire too. It is not just a bad idea, but probably a fatal one on the battlefield. 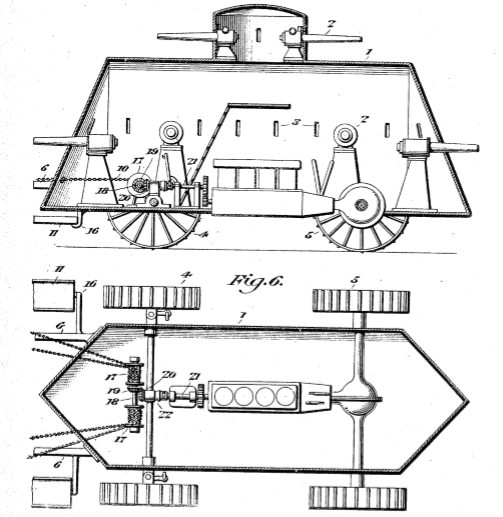 Cross section of Calisi’s design showing location of engine and winch for winding chains in and out. Source: Patent: US1307238

Given that this is just one more odd patent for something never built, why is it important? It is one of the first patents relating to armored cars from anywhere, and is at the end of WW1 still showing a relative naivety about modern warfare. Also, this is an early – maybe the first – wheeled military bridging vehicle idea for military purposes and regardless of the merit as a workable idea, the Calisi design stands out as an example of the thinking around the problems of crossing obstacles for wheeled vehicles.

The picture showing “Side views of Calisi’s War Car showing the rails in the raised and lowered positions” is the same as the one showing “Calisi’s design from above showing the steps of using and then recovering the rails.

When i saw this AFV i thought it was an A7V.