In 1966, the Bundeswehr (German Army) was looking to replace its now redundant American-supplied M42 Duster Self-Propelled Anti-Aircraft Guns (SPAAGs). Two projects were investigated. These were the ‘Matador’ (designed by Rheinmetall, AEG, Siemens, and Krauss-Maffei) and the ‘5PFZ-A’ (designed by Oerlikon, Contraves, Siemens-Albis, Hollandse Signaalapparaten and Kraus-Maffei/Porsche). In 1971, it was finally decided that the 5PFZ was the better vehicle, and as such a test batch of four 5PFZs, with the designation of ‘B1’, were delivered. Another pre-series batch of twelve 5PFZ-B1s were delivered in 1973.
By September 1973, the vehicles had received the name Flugabwehrkanonenpanzer Gepard (often shortened to Flakpanzer Gepard. Gepard meaning Cheetah in English). The first order for the vehicle totaled 420 units. After the first 195, the remaining 225 were equipped with a Siemens Laser Rangefinder. These Gepards were given the B2 identifier.

The Gepard has served non-stop since its introduction and has only started to see retirement in 2010. It has served with a number of countries. 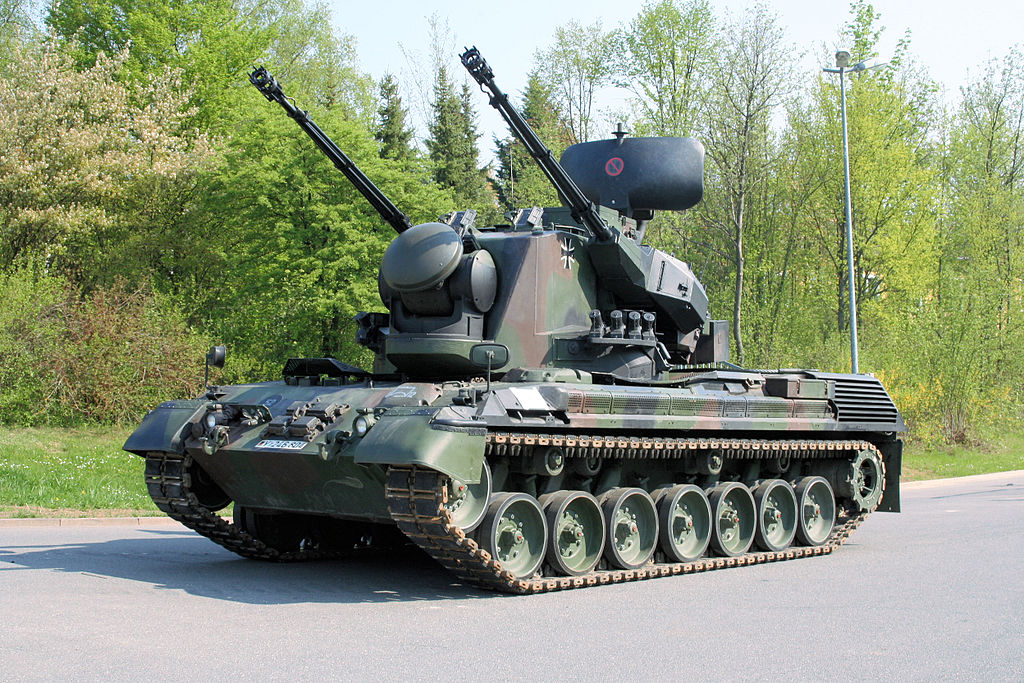 Like its World War II namesake, the Flakpanzer 38(t), the Gepard was based on the hull of an existing tank. The tank chosen was Germany’s own Leopard Main Battle Tank (MBT). Entering service in 1965, the Leopard 1 is one of the most famous tanks of the Cold War and Modern Era. It was lightly armored, but extremely mobile and armed with the potent British L7 105mm Rifled Gun.
After countless upgrades and derivatives, the tank was replaced in the Bundeswehr by 2003, by its successor, the Leopard 2. However, it continues to serve around the world in countries such as Turkey, Brazil and Greece.
The Gepard’s hull remained almost identical to the Leopard original, aside from a slight increase to the distance between the third and fourth road wheels. This also resulted in a slightly longer hull. The engine deck was also extended to house an additional six 24 volt batteries. Under the engine deck is the same the 830 horsepower MTU MB Ca M500 diesel engine used in the Leopard. This propelled the vehicle to 40 mph (65 km/h). The SPAAG was also equipped with a secondary Daimler-Benz OM 314 4-cylinder diesel to supply energy to the tank’s electrical systems. This engine is located in the front left of the hull where the original Leopard had an ammunition rack and works through 5 generators that power the turret’s traverse, gun elevation, and radar systems. The exhaust for this motor runs along the left-hand side of the hull. 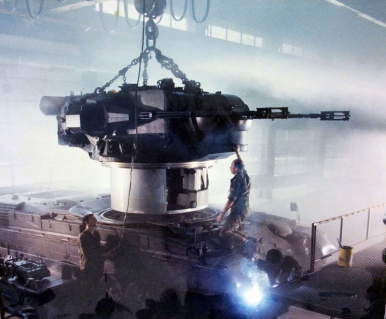 The Gepard’s turret is lowered on to an awaiting hull. Photo: Peter Favier on Pinterest
The Gepard is operated by just 3 crew members consisting of a Driver, a Gunner and the Commander. The Gunner sits on the right-side of the turret with the Commander on the left. The driver remains the hull. The Gunner and Commander stations are equipped with stabilized panoramic sights which are incorporated into the turret roof. The sights can be paired, or ‘slaved’ to the tracking radar. The Commander is equipped with handheld viewing equipment when operating open-hatch. Both of these men share a large one-piece hatch in the turret roof.

The turret is the major change from the Leopard and houses the equipment that, at the time of its creation, made the Gepard one of the most deadly Anti-Aircraft vehicles ever built. The Gepard’s primary weapons are dual 35 mm Oerlikon KDA autocannons which are 90 calibers (3.15 m, 10 ft 4 in) long. As well as the full 360 degrees rotation of the turret, the guns can be elevated to almost a 90-degree vertical angle. The muzzle of the guns are fitted with a projectile velocity sensor. Each gun has a 550 rounds per minute rate-of-fire, with a combined rate of 1,100 rounds per minute. The cannons are chambered for 35×228mm standard NATO issue rounds. These include SAPHEI (Semi Armor-Piercing High-Explosive Incendiary), HEI (High-Explosive Incendiary) and FAPDS (Frangible Armor-Piercing Discarding-Sabot). 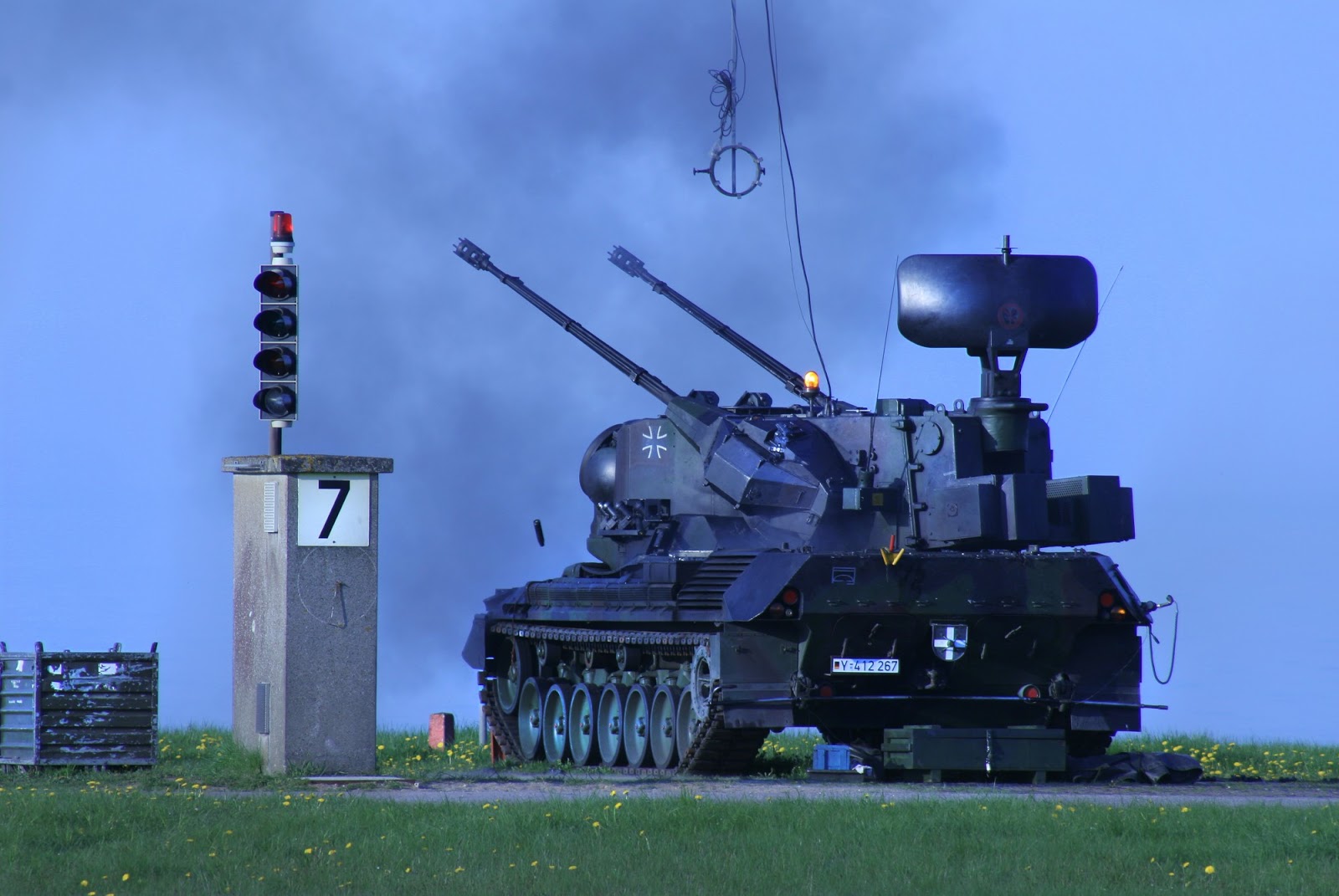 The Gepard firing its guns in a training exercise. Photo: SOURCE
The vehicle carries a mix of these ammunition types, holding 620 rounds in total. This amount is split equally between the guns. 40 Anti-Tank rounds are carried near the breaches of each gun for quick loading should the vehicle have to defend itself from attacking enemy tanks or IFVs (Infantry-Fighting Vehicles) in an emergency. The rounds are fed in by disintegrating belts. When fired, the links and spent cases are ejected from the elevation hub of the guns.
The cannon’s work in conjunction with the radar systems and a laser rangefinder. The Gepard started out with Doppler Radars. These work by using the Doppler effect to calculate velocity and distance data of a selected target. The same technology can be found in the speed guns used by Police. An MPDR-12 Doppler surveillance or ‘Search’ radar is mounted on the rear of the turret. This revolves 60 times per-minute and has a range of 15 kilometers (roughly 9 ½ miles). It is mounted on a swinging arm. When in use it is raised, when it’s off it is lowered. This radar searches for targets in the assigned airspace. When an aircraft is pinged and identified as hostile, the Doppler ‘Tracking” radar mounted on the nose of the turret takes over. This radar can rotate 180 degrees left and right and also a range of 15 kilometers. Once it is locked on, it automatically tracks the target in azimuth, elevation, and range. 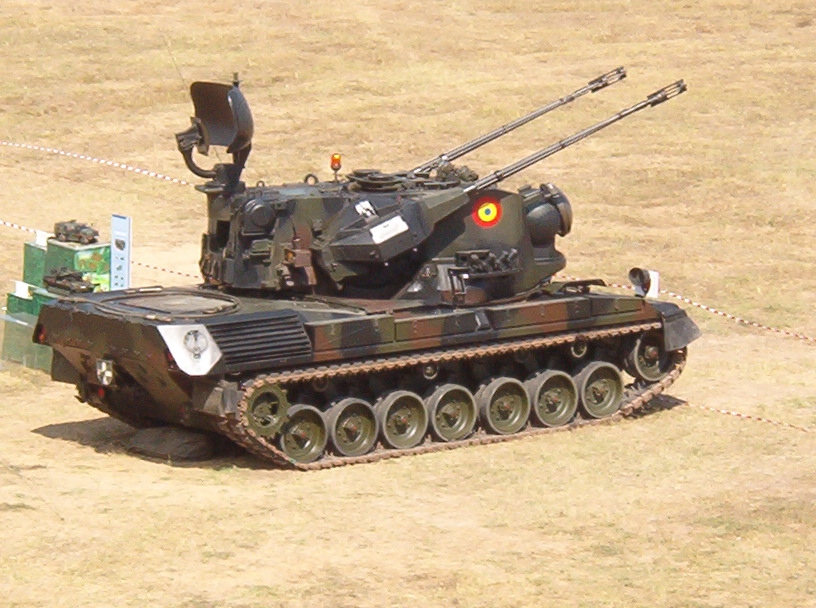 Romanian Gepard in service – Source: Wikimedia commons, lt.col Dragoş Anghelache. Photo: SOURCE
The guns are also connected to an analog automatic firing control system (FCS). The computer calculates the correct lead angles and distance with the data from the radar systems. Once the target is identified through an IFF (Identification: Friend or Foe) system as hostile, the guns open fire. 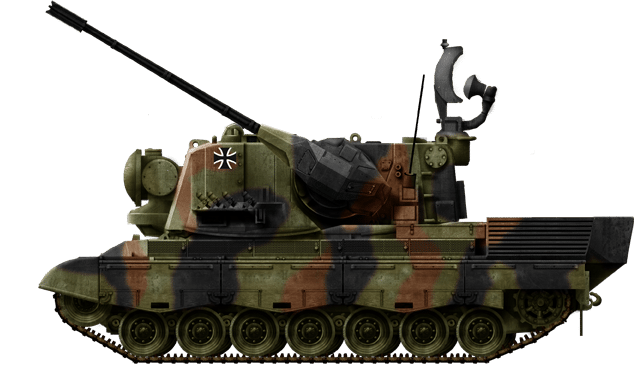 Tank Encyclopedia’s own illustration of the Flakpanzer Gepard by David Bocquelet. 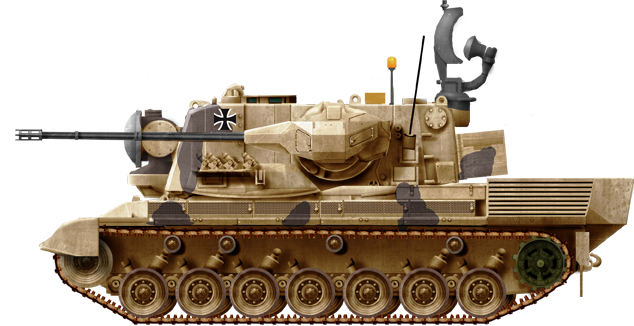 Flakpanzerawbwehrkanone Gepard 1A2 Afghanistan 2010 or 2011 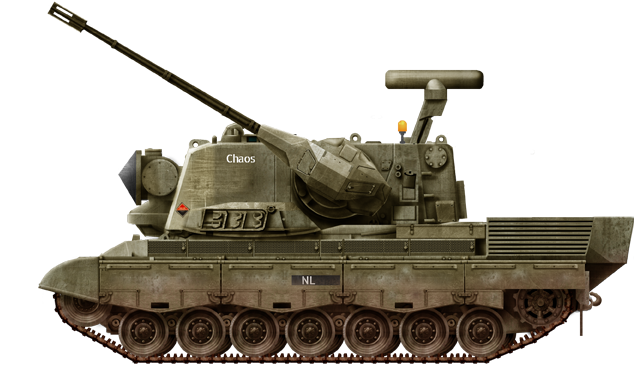 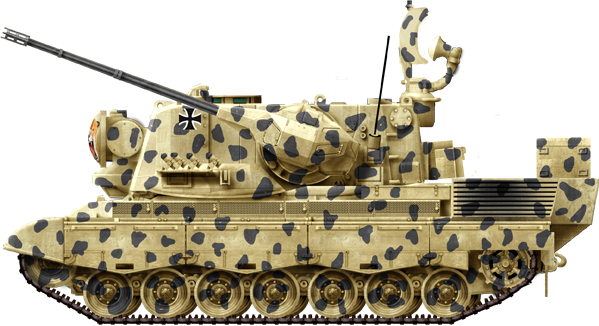 Flakpanzer Gepard in its special “cheetah livery”, last live rounds at Totendorf in 2011. 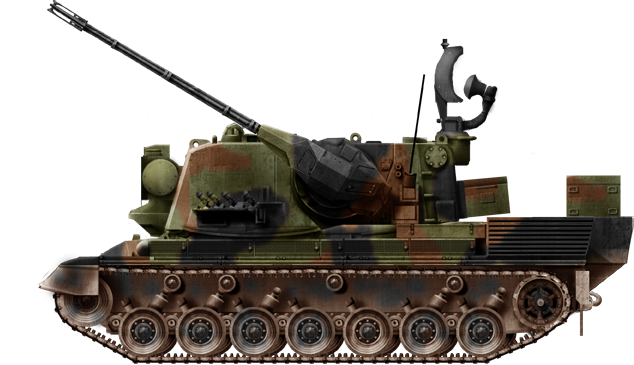 Brazilian Gepard as of today 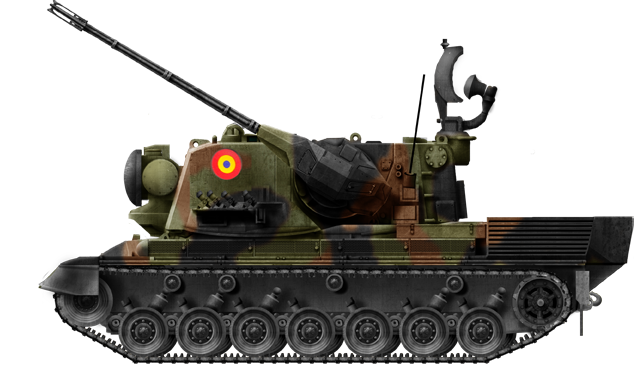 Romanian Gepard, as of today 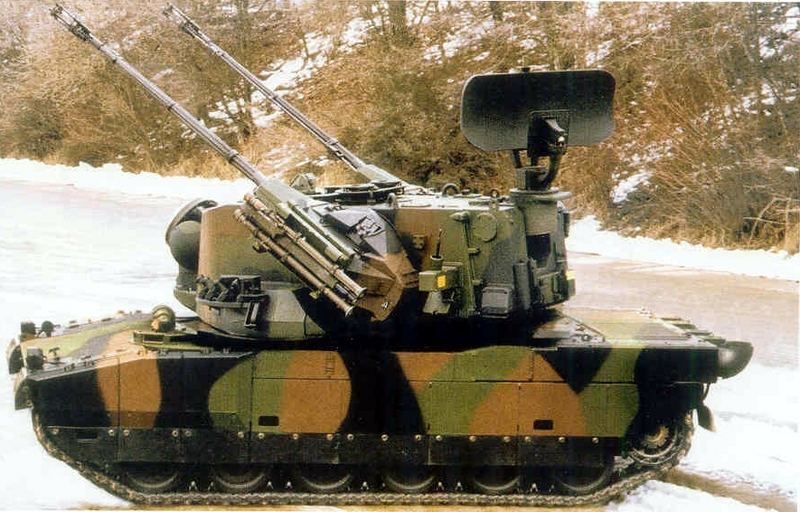 The “Flakpanzer Leclerc”. Notice the two Stinger missiles connected to the gun arm. Photo: TankPorn of Reddit
A version of the Gepard 1A2 was also proposed with two Stinger missiles attached to each of the guns. However, it was not accepted by the Bundeswehr. The Flakpanzer Gepard turret was also proposed for mounting on the French Leclerc MBT. The demonstrator also has the missiles mounted. However, nothing more came of it.

As already stated, the Flakpanzer Gepard started to be phased out in the late 2000s. It is in the process of being replaced by the MANTIS (Modular, Automatic and Network-capable Targeting and Interception System) gun system. 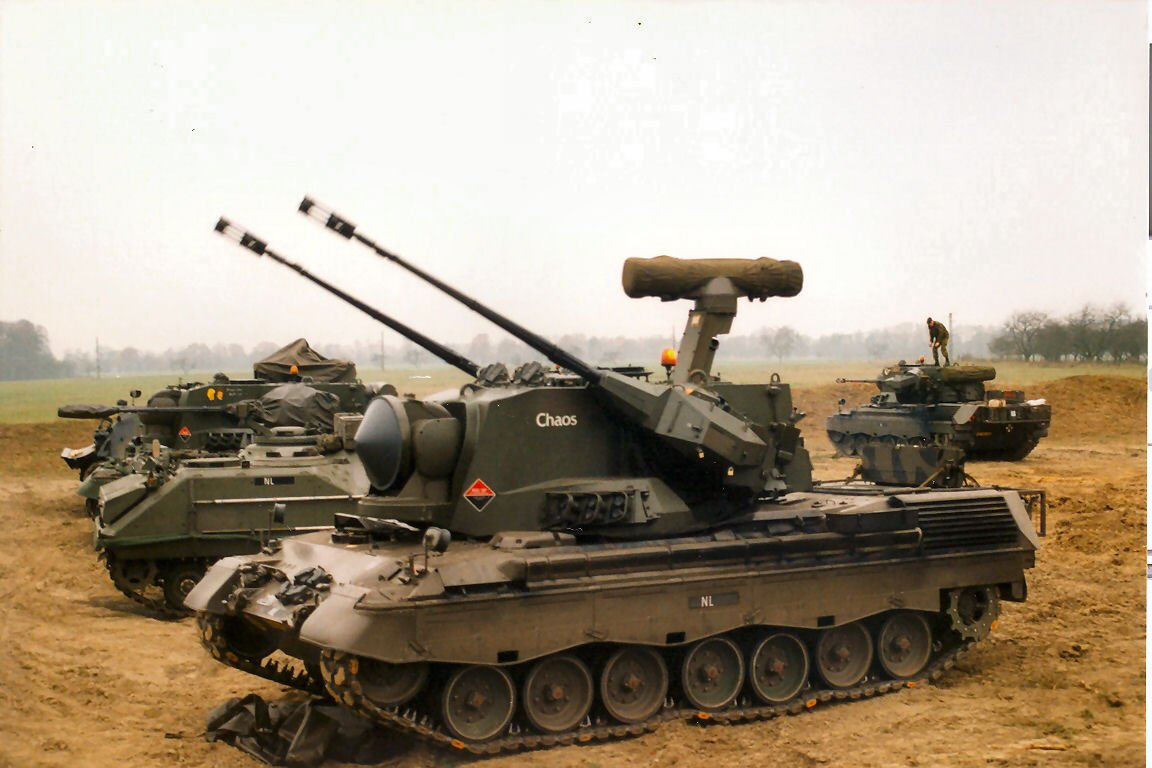 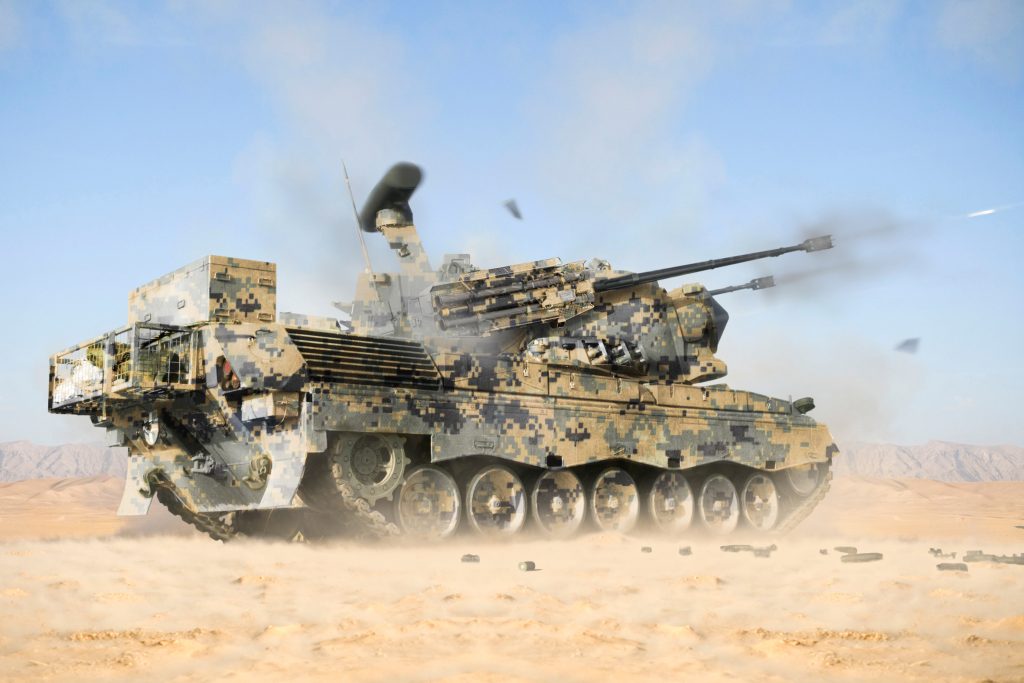 Jordanian Gepard, as of today. Notice the radar, as the models are former Dutch PRTL vehicles (HD photo). Stinger missiles has been added to the sides of the canons. Are SPAAGs still relevant today ? – The Jordanian thinks so. Src. Flickr.

The Japanese took great interest in the Flakpanzer Gepard, so much so that they built their own version based on the hull of the Type 74 Main Battle Tank. The vehicle was designated the Type 87. The weaponry was supplied by Oerlikon. To avoid patent infringement claims, the arrangement of the sensory equipment was altered. The Search radar remained at the back of the turret, but the Tracking radar was moved to the turret roof. The SPAAG is currently in service with the Japanese Ground Self-Defense Force (JGSDF), who operate 52 vehicles.
Full article on the Type 87 can be found HERE. 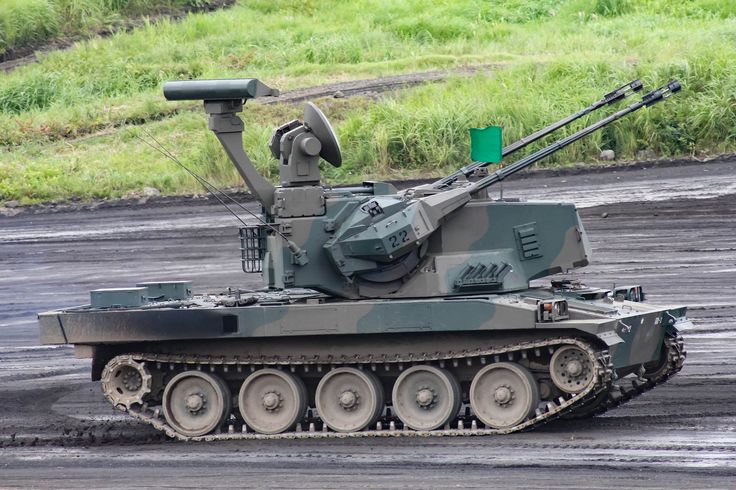 The Japanese Type 87, note the similarities to the Gepard. Photo:

“Flakpanzer Gepard ”
Hello from Norway,
I just wondered if their was anyone out there,with a good knowledge of the above vehicle?
I have a book from TANKOGRAD covering the above Flakpanzer. and very good it is to.
But I have not being able,no matter how much have have searched,to ascertain which GERMAN UNITS/BATTALIONS operated the vehicles?
I am hoping to buy a 1:10 Scale RC Model Soon.and will also collect the UNITS/Battalions who are connected to the Flakpanzer.
If anyone can help I would be very grateful ,The link to the 1:10 version is as follows so you know which variant I am referring to. AS FOLLOWS:-
https://www.sonderfahrzeug-modellbau.com/ma%C3%9Fstab-scale-1-10/flakpanzer-gepard/
Many thanks In advance
Regards Steve

During the Cold war the Gepards were operated mostly by the air defense regiments of the Panzer and Panzergrenadier Divisions. They regiment had 6 batteries of 6 vehicles assigned. The units would be FlaReg. 1, 2, 3. 4, 5, 6, 9, 10, 11, 12 and GebirgsFlaReg. 8. Additional Gepards served with FlaBtl. 620 of the FlaRgt. 600 assigned LANDJUT in case of war.