One of the most famous armored vehicles of all time and perhaps the most widely used and varied is the Armored Personnel Carrier M113. A vehicle originally designed in the 1950’s to a tight budget has become, due to its simplicity and low cost, a legend in its own right. The M113 came about as a result of a development process which goes back to 1954 and the work done on the T113 Armored Personnel Carrier (APC).

The roots of the T113 and T117 go back to June 1954, when Detroit Arsenal began to consider a whole family of lightweight vehicles for the military that shared a common chassis. Army Field Forces were sufficiently impressed with the idea that in September that year produced the outline characteristics they wanted to see in this family. Two basic configurations were considered; ‘light’ (8,000 lbs – 3.63 tonnes) and ‘heavy’ (16,000 lbs – 7.26 tonnes), and both were to be considered in wheeled and tracked configurations. 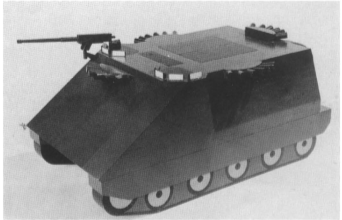 Early configuration for the 10-man tracked carrier concept circa 1954/55. Photo: Presidio Press
The development of these ideas led to a presentation to Continental Army Command (CONARC) in June 1955 and the 10-man tracked carrier had been expanded to take twelve instead (2 crew and 10 troops). In January 1956, CONARC, having considered these proposals, approved the development of this family of vehicles to cover the tracked carrier (now to carry 13 men) designated T113, a smaller version for 4 men designated T114 and some wheeled variants.

The contract to construct 16 examples of these early vehicles for evaluation went to FMC in May 1956, with half to be built in aluminum and fitted with an ordnance air-cooled engine and the other half to be built in steel with a commercial liquid cooled engine. These were to be built in different variants with 10 APC versions, 2 mortar carriers, 3 missile carriers, and 1 experimental chassis. The mockup for the T113 was finished and inspected in October 1956 and the APC and mortar vehicles were approved for the production of the test vehicles.
Five T113s, built from aluminum, were fitted with an AOSI-314-2 air-cooled engine with geared steering and X-drive transmission. These vehicles weighed 17,600 lbs (7.98 tonnes). Five more were built in steel and fitted with a Ford V8 model 368-UC water cooled engine, also with the X-drive transmission. These vehicles weighed 19,530 lbs (8.86 tonnes). These steel vehicles were redesignated from T113 to T117. A proposal for a magnesium armored version was not adopted and received no ‘T’ number designation.

T113 (left) and T117 (right) seen during testing at Aberdeen Proving Ground. Source: Frye
On top of these 10 (5 aluminum and 5 steel) hulls, additional T113 and T117 hulls were provided for ballistic trials, and testing of them started at the end of 1957. The results of the testing recommended an increase in armor protection on the T113 to match that of the T117, weight limits permitting.

The hulls for the T113 and T117 were tested in 4 phases:
Phase 1 – 105mm M1 HE shell fragments at 90, 50, and 20 feet. (27.4 m / 15.2 m / 6.1 m)
Phase 2 – ballistic shock of impacts from 37mm M54 HE shell and 57mm M1001 Proof shell.
Phase 3 – Small arms fire
Phase 4 – bullet splash around hatches and doors
The T113 did not do well. Phase 1 tests at 90 feet (27.4 m) showed fragments could penetrate the roof plates. The T117 under the same conditions was not penetrated. Reduced to 50 feet (15.2 m), these same fragments could penetrate the steel armor of the T117 too.
Both designs were equally poor in the side test. A 105mm shell was detonated 50 feet (15.2m) away and fragments pierced the sides of both vehicles.
Both vehicles suffered some weld cracking during the shock tests, but both were immune to small arms fire including armor piercing rounds. Overall, the steel hull of the T117 was found to be superior under almost all circumstances to the armor of the T113. 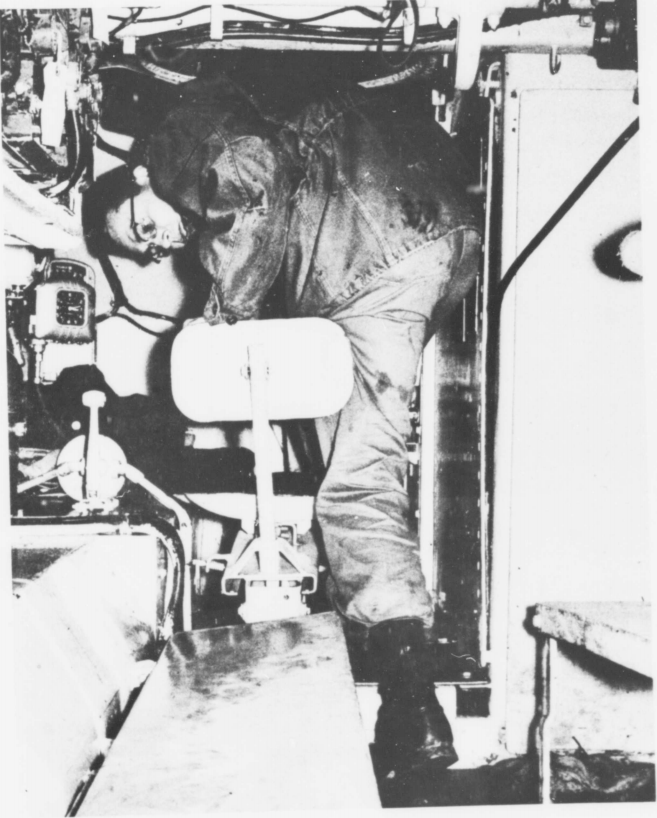 Driver of the T113/T117 had to squeeze through a very tight position to get seated. Source: Torre and Garinther
Other tests included the ease with which troops could get out. For comparison, the earlier M59 was able to be unloaded in 8 to 8.5 seconds. For the T117, 9.2 to 9.5 seconds were needed to dismount. It was also about a second slower to load up too. The main failings were ergonomic, the seat could trap soldier’s equipment and, if the commander’s hatch was open, the cargo hatch in the roof (the emergency fire escape for the troops inside) could not be opened 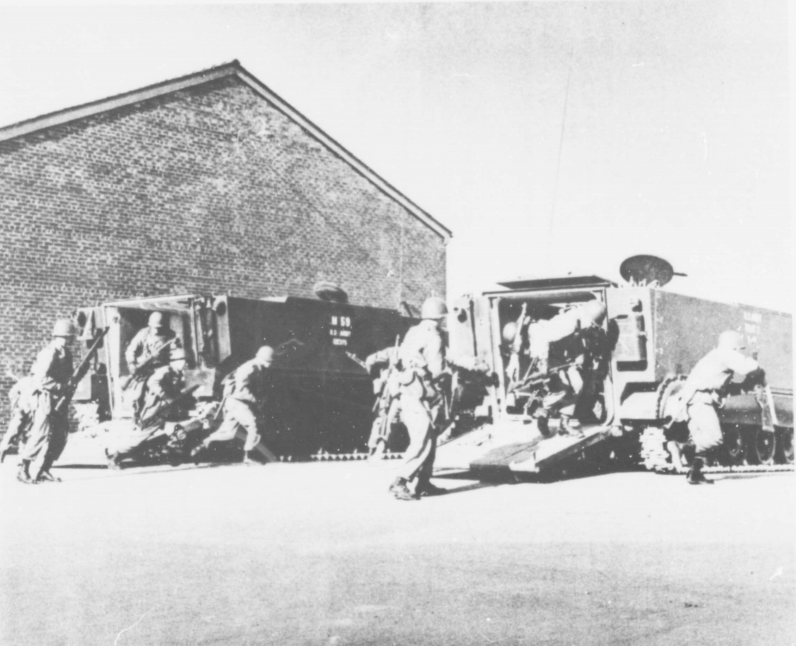 Troops carrying out tests of the M59 (left) compared to the T117 (right). Source: Torre and Garinther 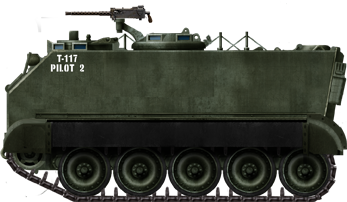 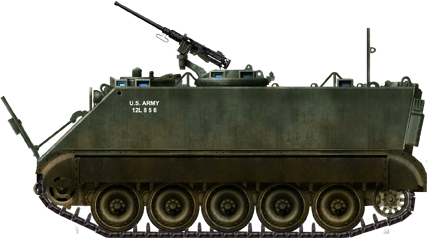 Both Illustrations are by Tank Encyclopedia’s own David Bocquelet

In late 1957, the requirements for an armored personnel carrier for the Army were changed by CONARC. The new vehicle would have to meet tight budgetary constraints, particularly with respect to the engine, and feature improved armor compared to earlier vehicles. Now, despite the firing trials showing the steel hull to be ballistically superior, the vehicle was to be made from 5083 aluminium. The steel option was discontinued. Those vehicles were to become the T113E1 and T113E2 in October 1958, but the T113 and T117 were no longer required.
The July/September 1958 issue of Armor Magazine reported that the ‘Carrier, Personnel, Full Track, Armored, T-113’ was undergoing trials and that the US Army Infantry School had nicknamed it the ‘Kangaroo’ 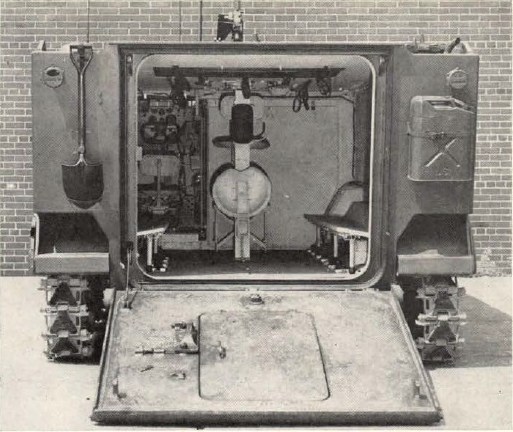 Rear view of the T113 with the hydraulically operated ramp down. Source: Armor Magazine 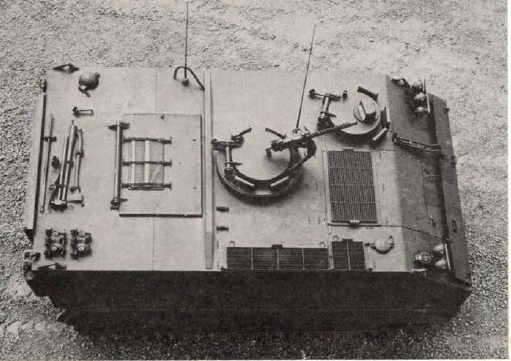 Top view of the T113 showing the driver and commander’s hatches and the generally simple overall shape of the vehicle. Source: Armor Magazine

The driver for this vehicle was stationed in the front left with the commander behind the driver and located centrally under a small roof hatch. A standard single .30 cal. machine-gun was fitted to a ring on the commander’s hatch. The engine was located in the front right-hand side of the vehicle. The transmission and final drives were also at the front with the whole of the reason half of the vehicle dedicated to the ground troops who sat in the back on benches facing inwards. Fuel for the vehicle was carried in a fuel tank located in the front right corner with the exhaust and air intakes on top of the vehicle. A single, large rectangular hatch sat atop the troop compartment opening on a rear hinge. A full-width bar went across the roof between this hatch and the back of the commander’s cupola to protect from rounds penetrating the edge of the hatch and to stiffen the body of the vehicle. Exit from the vehicle for the mounted troops was primarily by means of the large rectangular ramp at the back although a smaller, rectangular door was mounted centrally in the ramp too. The commander and driver each had their own hatches but there was also an emergency exit made in the roof in the form of a large hatch.

The T113 and T117 sat on 5 road wheels on each side, connected to torsion bar suspension running on a single-pin, center-guide, rubber-padded track that was 15” (381mm) wide. Two types of engine were planned, an air-cooled supercharged four-cylinder petrol engine and a liquid-cooled diesel truck engine both developing over 200 hp. Both were to use the same transmission,

The T113 and T117 did not survive long. They were simply a step away from the M59 and a step short of what became the M113. Aluminum had been selected over steel despite its poorer ballistic performance because it kept the weight of the vehicle down and, whilst there were ergonomic flaws with the T113 design, the stage had been set to make modifications to capitalize on what was overall a successful project to put an armored box on tracks.

Archive footage of the T113 undergoing trials on land and water

Do you mean the T114 BAT? That is not within the scope of the present article!