Frederick Richard Simms (12/8/1863 to 22/4/1944) was a successful businessman and entrepreneur. He was one of the early pioneers of the British industry having founded his firm, Simms Motors, in about 1896 before joining the British Motor Syndicate (BMS). He had tried his hand at military machines at the turn of the century, first with his Quadricycle Motor Scout – a machine gun mounted on a small powered 4-wheeled bicycle, the Simms Draisine in 1899 (a small railway patrol vehicle fitted with a single machine gun) and with his War Car in 1902 (a large truck-based machine with several guns). None of those machines, however, regardless of what merits they each may or may not have had, led to any military orders. 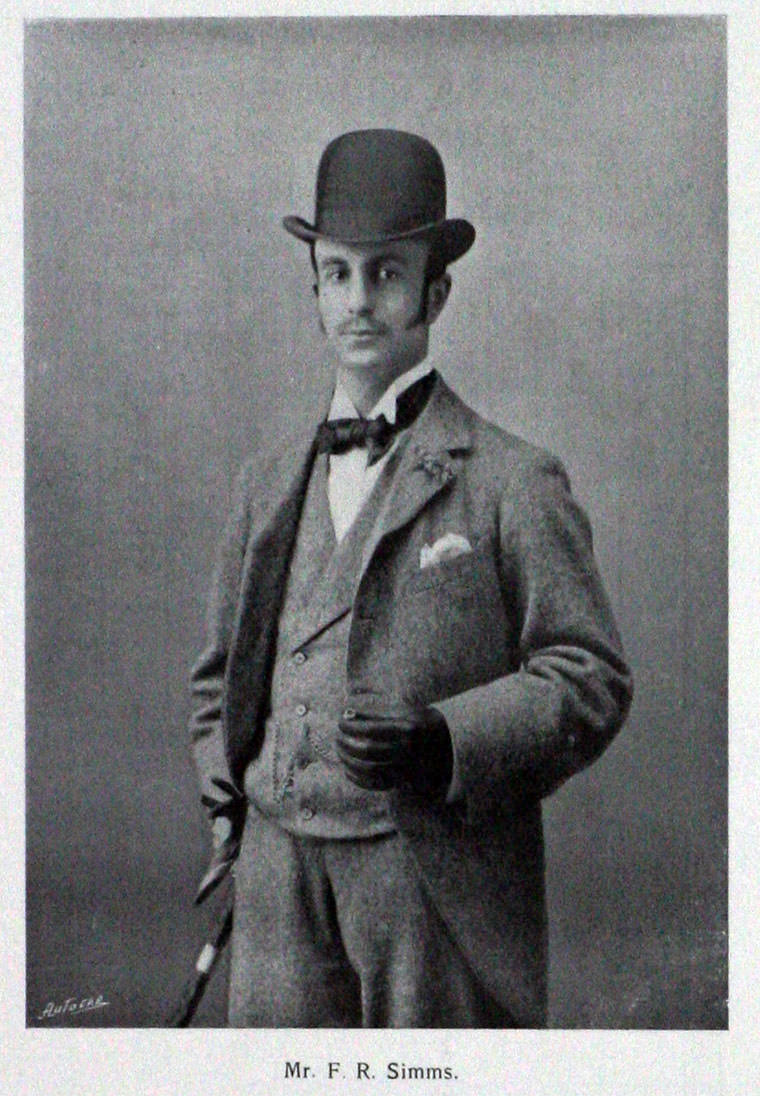 Simms’ previous military ventures had been at the time of the 2nd Boer War (1899-1902) and were clearly inspired by the need for mobility and firepower combined together to tackle a highly mobile enemy. When war broke out in Europe in 1914 those ideas rapidly became redundant. War quickly became more and more static with fixed lines of defenses. Simms once more saw an opportunity for a potential business contract and to help Great Britain win a war against the country of his birth, Germany. 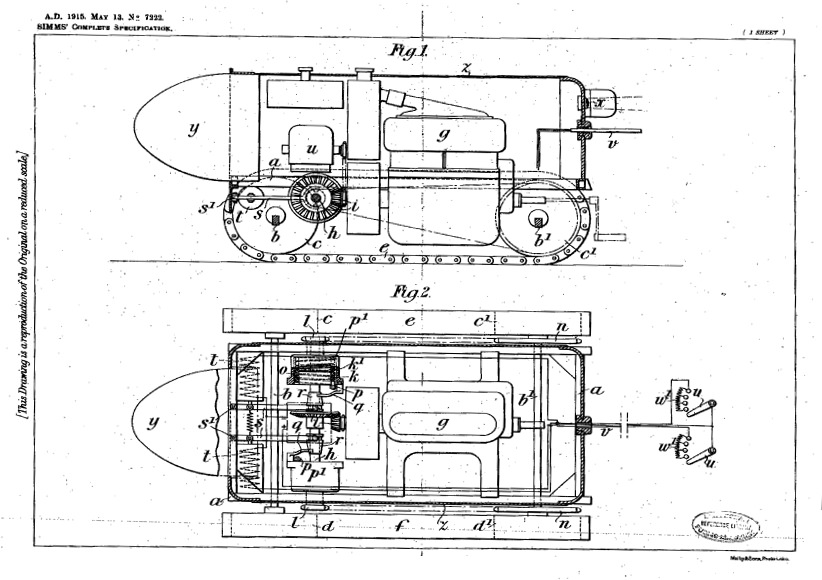 Simms’ track-laying motor vehicle of 1915.
This new type of war needed a machine to break the deadlock and Simms obviously saw this need. As a result in May 1915, not long after the Landships Committee started working on its own secret tank development, Simms, completely independently, submitted a patent innocuously titled “Improvements on Motor-propelled Vehicles”.
Unlike his wheeled designs, this vehicle was to use “two lateral propelling chains” which would, by means of a differential drive, also provide the steering. Drive to the chains was delivered directly by mechanical gearing but was controlled electrically by means of solenoids. Electrical power, like from his earlier ideas from some of his commercial designs, would come from a dynamo driven by a petrol engine, and would also power pilot lights to enable it to be steered at night. This electrical controls for the motor came out of the back of the vehicle at a point just above the center-point with the dynamo and fuel tanks in front of it and would be controlled by the ‘driver’ some distance behind controlling the torpedo by means of a cable.

The Simms Land Torpedo. Illustrated by Tank Encyclopedia’s own Bernard ‘Escodrion’ Baker, funded by our Patreon Campaign.
There was no armor specified in the design but bulletproof protection for the “casing” would be required. That is because this odd looking vehicle, instead of carrying a driver, carried an enormous explosive charge on the front to be detonated either electrically or physically (by impact from ramming).
The driver was well away from the vehicle, in a safe position controlling the movements of the vehicle by manipulating the current applied to the track motors maneuvering the vehicle into position for detonation. No dimensions are provided but the drawing of the starting handle would suggest a vehicle approximately chest high which would mean a very substantial explosive charge. 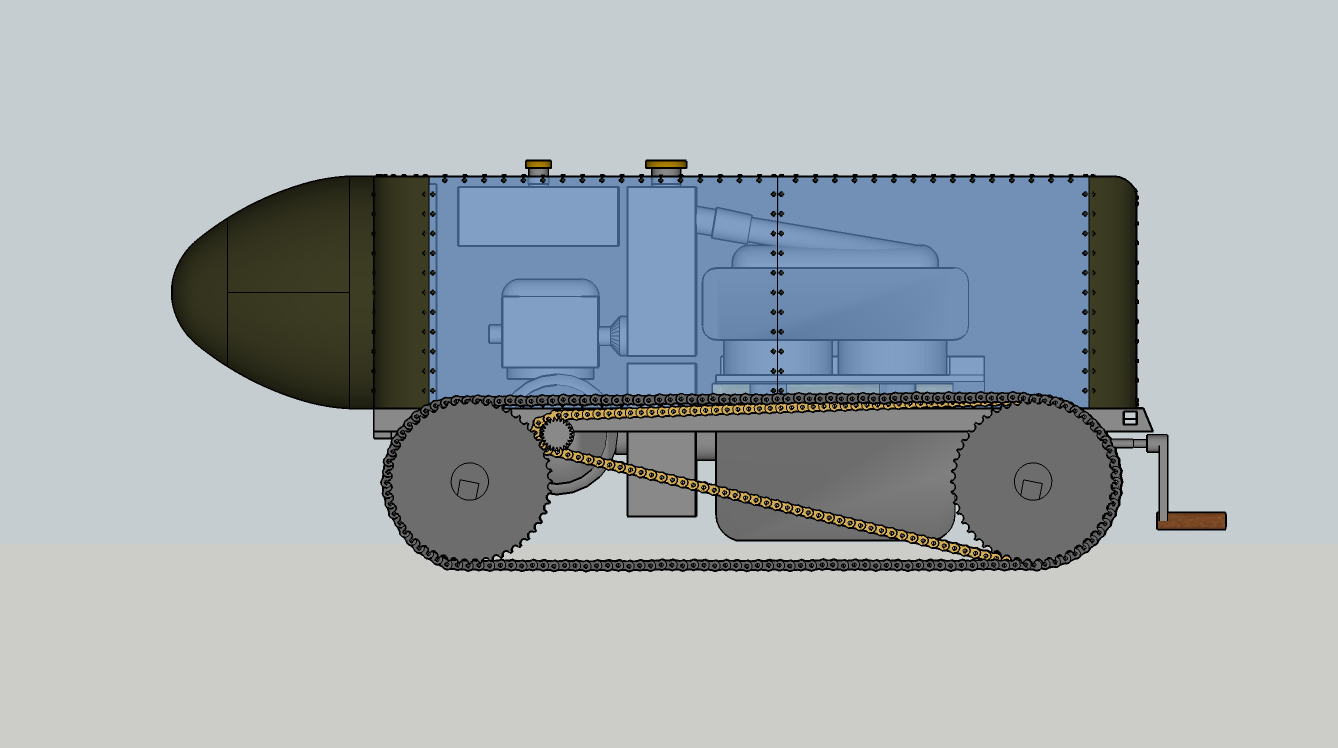 Artwork showing approximate positions of the engine etc. as a cutaway. The wires spool out of the back of the vehicle above the starting handle. Photo: Authors Own
This design, despite being tracked, is not a tank. Instead, it is one of the first examples of a remote-controlled weapon system, the most famous of which would be the German Goliath vehicle in the next war. Despite the obvious advantages on paper of this weapon system, the flaws were apparent too. Tracked systems were still not perfect, and with the cable spooling out behind it any damage to the wires would render this huge bomb completely immobilized. On top of this, the controller of the machine would have to remain in cover to avoid being shot and far enough away not to get caught in the blast. No orders were ever placed and it is not known if the idea ever got as a far as the Munitions Board to consider. The design could also have struggled in the deep craters and broken ground of the front lines. The overhang at the front could easily become stuck in the mud and to rectify this would have meant extending the tracks forward and higher in relation to the height of the vehicle. 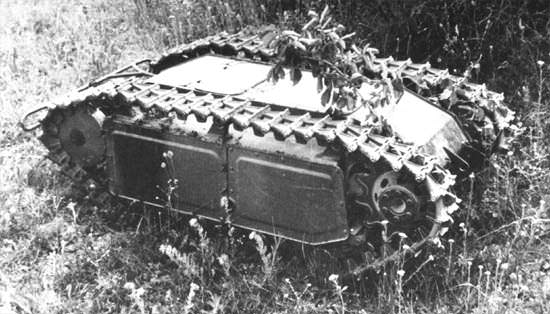 German Goliath device from WW2 worked on the same basic principle of being guided by wire to its target and then detonated.

Simms was a successful vehicle maker but he was not a successful designer of military vehicles. Neither his motor scout, his draisine, or his War Car ever received orders from the War Office. This last design though is different, it didn’t go into production but unlike the obvious flaws in the previous designs, this land torpedo design carrying a huge explosive charge into enemy obstacles or positions was a missed opportunity for development and a principle proven to be useful in the following war. An invention well before its time and given the difficulty of crossing wire and enemy obstacles which had necessitated the development of the tank in the first place, it was obviously needed. Had the War Office known about or adopted this idea in whole or in part it could have played an important part in World War 1 but instead is simply yet another patent idea left languishing and ignored. Simms died in 1944, living long enough to see weapons just like this one deployed to the battlefield.

The amount of research put together here is amazing. However, there is one glaring error on a lot of the vehicles as they carry the White-Red-White 1918 recognition stripes. These stripes were designated only for Mk IV, Mk V, MkV*, and Whippet tanks. The position and sizes of the stripes were set out in official documentation on 14th March 1918 and drawings showing the size and positioned followed in April 1918. The side, front, and rear markings were for the benefit of ground troops to distinguish between British tanks and the captured and re-used Mk IVs (Beutepanzers) used by the Germans. The top markings were for the benefit of the RFC/RAF planes and were visible from “1800 feet”. Therefore, tanks prior to 1918 did not carry these markings

Hey Tony,
Well, this thing was drawn in 1915, so it is not preposterous for it to have seen service in 1918 and gotten that camouflage.
Also, for such drawing-only vehicles, we have a bit of fun with the camos, even if they’re not 1000% historical. We do not stray too far though, but you can’t exactly expect to have a historically-accurate camo on something that never made it off the paper.