Chimera began as a design exercise in April 1950 at the School of Tank Technology (STT) to design and draw up the plans for a tank capable of engaging and destroying the Soviet IS-3. The Soviet behemoth had first shown up in numbers at the Berlin Victory Parade of September 7th, 1945 and the British tank industry began working overtime to come up with new and innovative ways to tackle this tank, as it appeared to render all British designs at the time relatively obsolete.

Requirements – How to Beat an IS-3?

Individual firms, such as Vickers and Leyland, began to look at ways to quickly mount 120 mm guns onto existing hulls, while Chertsey and the STT looked at other ideas and design exercises. The course looked at the IS-3 and evaluated what they knew about it. Instead of focusing on what was good, they looked at what was bad and how these issues could be improved upon in a British counter.

The issues highlighted several areas, notably the omission of refinement, lack of crew comfort, low power-to-weight ratio, and its limited ammunition count. The team set about a design that could overcome these issues and try to match its better aspects. The team realized that, in order to overcome the faults found in the IS-3, the Chimera would need to weigh 55 long tons (55.9 tonnes) and have a crew of four. The designers were convinced that although 55 long tons was ten long tons heavier than IS-3, the installation of a powerful engine, increased crew space, additional ammunition capacity and other capacities such as gun handling would compensate for the higher profile and weight gain.

The Chimera was also to feature set design criteria that included a low maintenance score i.e. be quick to fix with minimal costs or resources and ideally a small training curve for ease of operation and a training program that was forgiving for new crews.

In order to overcome the IS-3, the Chimera needed to mount a weapon able to penetrate 120 mm of armor at 2,000 meters and, if possible, be multirole, able to tackle both armored targets and provide adequate support against soft targets or fortified positions.

For defensive purposes, Chimera was to have enough armor to survive being hit by the IS-3 at 1,000 meters. The designers calculated that the 122 mm gun had 173 mm of penetration at 1,000 meters.

Finally, it was noted that the IS-3 was underpowered or lacked agility on the battlefield and therefore Chimera was to have as large an engine as possible, and not less than 1,000 bhp to give it an advantage in the mobility department. 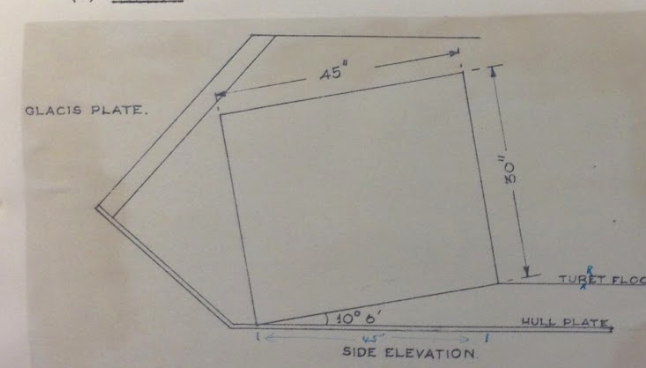 Several weapon layouts were considered. The initial idea was for a 120 mm ADPS firing rifled gun which was discarded as it was calculated that in order to achieve a 100% chance to penetrate the IS-3 at 2,000 meters, the round would need to be traveling at 4,000 fps, which was not possible to achieve in a gun the size and weight required for Chimera. They, therefore, chose to go with a large rifled weapon designed to fire High Explosive Squash Head (HESH) as its primary ammunition, with High Explosive (HE) and High Explosive Anti-Tank (HEAT) as secondary rounds. HESH would suffer no loss of performance over distance and double up as an effective secondary round at the same time.

The amount of Plastic Explosive (PE) filler to overcome the armor on the IS-3 was estimated at 24 lbs (10.8 kg) and, with an average of 40% filler, would require a 60 lb (27.2 kg) shell from a gun with a caliber of at least 5 inches (127 mm). It was desired that the gun be mounted rigidly, meaning that it would have no recoil mechanism and would be mounted rigidly to the turret, but could still go up and down. Also, a Centurion-like mantlet was to be avoided. This may have been designed in order to save space and internal volume and other UK vehicles had had problems when trying to mount 120 mm guns. Secondary weapons were to consist of machine guns either coaxially mounted, pintle-mounted, or even a bow gun configuration, although the latter was quickly dropped. A pair of Campbell smoke dischargers were also chosen for screening purposes. The issue of obscuration was raised, however, and the team looked at various bag charges and settled on a relatively smokeless charge that would alleviate a lot of the issues but no bore evacuator or muzzle brake was to be fitted and a limited amount of obscuration would be present.

The armor thickness was matched quite closely to that of the IS-3, at least on paper. The designers estimated the Soviet turret to be 200 mm thick at the front, and so, Chimera’s was to be 8 inches (203 mm) correspondingly. They did not know what the turret side of the IS-3 was and chose Chimera’s to be 3” (76 mm). The Chimera team estimated the IS-3 to have 120 mm of frontal armor at 55°, however, they did not appear to have taken into consideration the secondary angle of the pike nosed design which gave it in excess of 200 mm of effective thickness from the front, providing the hull was facing the shooter. In response to this, Chimera’s frontal plate was 114 mm thick at 55° for 199 mm of effective protection.

The IS-3 did have thicker side armor with its 45° sloped inner side offering 90 mm of protection to the 75 mm of Chimera that tapered to 50 mm at the rear, although this was nearly twice as thick as many British tanks that often had to rely on only 40 mm of side armor. The IS-3 did offer better protection on the roof with 60 mm to the Chimera’s 25 mm and both had similar belly plates of about 25 mm.

The IS-3 was armed with the powerful D-25 122 mm AT cannon which, at combat ranges (1,000 meters), could perforate 158 mm of Rolled Homogeneous Armor (RHA) with its BR-471 Armor Piercing High Explosive (APHE) rounds or 180 mm with Armour Piercing Capped Ballistic Capped (APCBC) rounds, forcing the IS-3 to close to around 500 meters to be combat effective. The 120 mm High Explosive Squash Head (HESH) from the Chimera would have scabbed up to a maximum depth of 375 mm, but an optimal armor depth of 100-200 mm would have resulted in a large amount of spall and the relative thickness of the IS-3 frontal plate having little to no effect on the hypersonic shockwave.

The next comparison the team made was in engine power. The IS-3 was considered underpowered with what they believed to be a 520 hp engine and a top road speed of 40 km/h and to that end they decided to go with a 1,040 bhp engine which would give it about 18 hp/ton and a top speed of 50 km/h on roads. This maneuverability advantage would give the Chimera the edge in choosing where and when to strike.

Although the Chimera was never built, it did show the need for a large 120 mm or greater gun. It also showed that HESH would also feature heavily in the destruction of these Soviet tanks, a fact that remained true until the Soviet adaptation and integration of composite armor much later. They also assumed, correctly, that the Soviet layout was inferior to a more conventional system as later analysis of a captured IS-3 proved the limited hull space to be cramped and uncomfortable over any long period of time. Where the designers did go wrong was on the armor calculations and eventually the Soviets replaced the IS-3 with the heavier T-10 tank, and later the T-55 and T-62, both of which would have no difficulties in destroying Chimera at an equivalent range.

It should be noted that there are several ‘Chimeras’ in School of Tank Technology designs as certain names (especially those beginning with ‘C’) crop up several times over the years the school was in service. It would not appear that the name was specifically reserved for one class of type or course and one can surmise that this appears to be based purely on the UK not being willing to throw a good name away.

And yet they developed the Cheiftain,around the same weight with a measly 750 hp pack,and even after 20 years it only had 850?hp

Can I use the tank picture from your website for a logo on a golf ball for my son? His nickname is Tank.