Japan’s Type 10 Hitomaru Main Battle Tank (10式戦車 Hitomaru-shiki sensha) is one of the world’s most technologically advanced armored vehicles to date. This fourth generation vehicle is embedded with numerous top-of-the-line communicative and combative features, most notably the incorporation of the C4I system.
Designed to replace the aging second generation Type 74 and supplement the third generation Type 90 of the Japanese Ground Self-Defense Force (JGSDF), the Type 10’s technological prowess comes at a hefty price, however. The Japanese Ministry of Defense paid 954 million Japanese Yen per vehicle. ( US$8.4 million)

“HITO” of “HITO-MARU” comes from “HITO-tsu” (means “one” in English), and meaning of “MARU” is “zero”. (The primary meaning of the word “MARU” is “circle”. It often substitutes for zero in some phonetic reasons.)

Type 10 of the 5th Tank Battalion, 5th Brigade of the Northern Army. Identified by the Golden M on the turret cheek.

Under project name of TK-X/MBT-X, development of the vehicle began in the 1990s, while the Type 90 was still fresh off the production line, with production expected to begin by 2010-2011. The Japanese military considered that their armed forces were in need of a tank more suited and prepared for 21st-century warfare.
The first prototype of the vehicle, built by Mitsubishi Heavy Industries, debuted on February the 13th, 2008, at the Technology Research and Development Institute (TRDI) in Sagamihara. The Japanese Ministry of Defense liked what they had seen, formally signing off on the project late 2009. In 2010, ten of the vehicles were ordered from Mitsubishi.

The Type 10’s main armament consists of a purpose built 120 mm smoothbore auto-loading gun with optional barrels of L/50 or L/55 caliber. This gun was designed and developed by Japan Steel Works (JSW), who up until this point had been manufacturing the Rheinmetall L/44 under license, for use on the Type 90.

The Type 10 firing its 120mm main armament – Photo: Global Military Review
Though the weapon can use all compatible NATO 120 mm rounds, as well as the standard 120 mm rounds used by the JGSDF, the Hitomaru gun can also fire the Type 10 APFSDS (Armor-Piercing Fin-Stabilised Discarding-Sabot) round. This round is unique to the tank, and can only be fired by this specific gun.
As mentioned, the 120 mm is equipped with an auto-loading mechanism which negates the need for a dedicated crew member. As such, the Type 10 only has a crew of 3 with the commander and the gunner in the turret, and with the driver in the hull. The auto-loading mechanism is positioned in the rear section of the turret, giving it that rather large appearance. The gun is aimed with the assistance of various day and night compatible 360-degree view range sighting arrays. The barrel is also tipped with a muzzle reference sensor. Mounted on the right of the muzzle, this sensor is designed to detect any amount of warp in the barrel.
Secondary armament consists a coaxial Type 74 7.62 mm machine gun and a .50 cal Browning M2HB mounted on the roof in front of the commander’s position. This .50 cal can either be directly controlled by the commander or remotely from inside his position. Smoke grenade launchers are also integrated into the cheeks of the turret.

Protection against RPG (Rocket-Propelled Grenades) and shaped-charge munitions was a heavy influence in the development of the Hitomaru’s armor. The main armor plates on the tank are made from steel, with the option of using modular appliqué armor.
Some of the additional plates are sometimes mentioned to be a type of ceramic composite which can be added or removed depending on the mission and weight parameters. These plates can either be added to the sides of the hull, front of the hull, or all over the turret. Being new the exact nature of the armor is still classified.
Another part of the protective systems are the mud-flaps on the flanks of the vehicle, aiding in noise reduction, infra-red (IR) signature reduction, catch-fragmentation from explosives and reducing mud throw.

The Hitomaru is powered by a water-cooled, four-cycle, eight cylinder diesel engine producing 1,200 hp through a Continuously Variable Transmission (CVT) gearbox, propelling the 40-ton tank to a respectable 70 km/h (43.3 mph). The CVT gearbox allows the tank to go just as fast backward, as it does forwards, allowing for rapid changes in position. The baseline weight of the tank is 40 tons, with full armor and weapons loadout this can climb to 48 tons.

The Type 10 showing off its hydropneumatic suspension
A feature carried over from both the Type 74 and Type 90 is the Hydropneumatic Active Suspension. This is seen as a ‘must-have’ feature by Japanese strategic heads, given the Japanese countryside’s mountainous terrain. The suspension allows the tank to ride higher or lower depending on the terrain type, tilt left or right, or raise and lower the front or rear of the tank. This increases the elevation or depression angle of the gun, giving the ability to fire over a ridge line without presenting a target for an enemy vehicle.
This suspension also has another use. A bulldozer blade can be mounted on the bow of the vehicle. When the front of the tank is fully depressed, this blade serves as a way to clear out debris from a firing position or help to carve out a new one.
A similar system was incorporated on the Swedish Strv. 103, or S-Tank.

A highlight of this vehicle’s abilities is its compatibility with the C4I (Command, Control, Communication, Computer & Intelligence) system. Tests were made with the Type 74 and Type 90, but it was surmised that there was not enough room for the system in these vehicles. 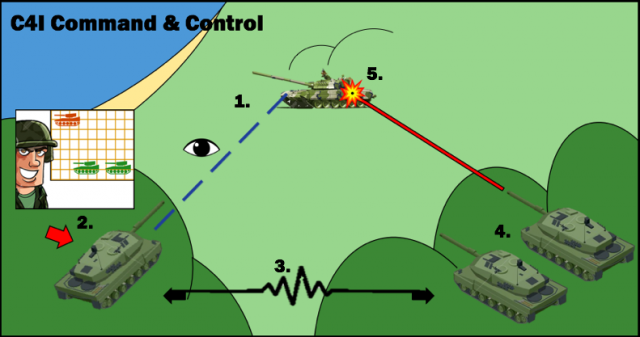 Diagram of how the C4I system works. 1: Command vehicle spots the enemy vehicle. 2: Commander plots the vehicle’s position using the C4I computer system. 3: The information is shared with other tanks in the area. 4: With the information, the target is acquired. 5: Target is engaged. Author’s illustration.
The C4I system gives the tank the ability for direct communication within the JGSDF network, allowing the tank to share digital information with command positions as well as the infantry’s outdoor computer system, the Regiment Command Control System (ReCS). This allows both armor and infantry to work with the utmost cohesion.
The Japanese Government is understandably, very secretive about the system. As such, exact details of how it operates, or images of the system are not available as of this time.

The C4I control panel in the Commanders position of the Type 10. Photo: – Kamado Publishing 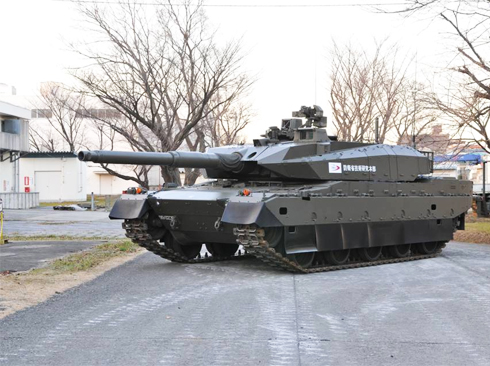 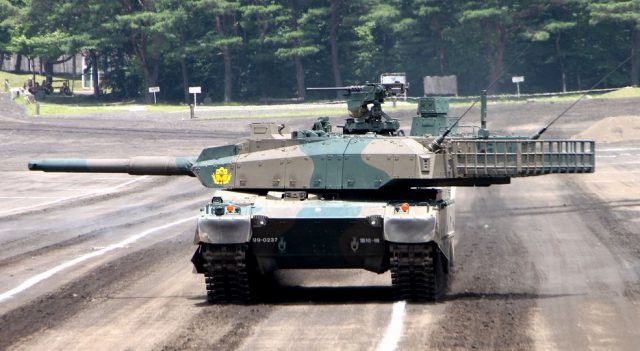 The Type 10 with its turret traversed to the right. Note the length of it with the rack included.

The Type 10 with dozer blade attached. Note the cut-outs in the middle of the blade for the tank’s headlights – Photo: Global Military Review

The Type 10 officially entered service with the Japanese Ground Self Defense force in January 2012, and production of the vehicle now stands at 80 units, though some sources suggest this could rise to 600 as Japan’s older vehicles reach the end of their lifetimes.
On January 4th, 2014 the Turkish military expressed an interest in purchasing the Type 10’s powerful engine for their own indigenous Main Battle Tank, the Altay. By March 2014 however, the deal had fallen through, with Japan’s strict arms trading laws a major factor.
Whether the tank was worth the astronomical price is, of course, debatable as, like its predecessors, it has not been tested on the field of battle. With a growing threat from North Korea, however, it is considered a worthwhile investment to the Japanese Government.

Type 10’s of the 1st Tank Battalion, 1st Division of the Eastern Army, taking part in the 2014 Firepower in Fuji event. The Battalion is identified by the Eagle on the turret cheek. – Photo: JP-SWAT

One of the issues with the Type 90 Kyū-maru Main Battle Tank was its weight of 50.2 tons. Due to weight limits of many roads and bridges in some of the more rural areas of Japan, the Type 90 was only deployed in Hokkaido.
A requirement of the Type 10 was that it was much lighter, and it achieved that. Unloaded, which is how it would be transported, it only weighs 40 tons, as previously mentioned. This means that 84% of Japan’s 17,920 bridges are now passable with the Type 10, compared to only 65% of the Type 90, and a meager 40% for the average western tank.

The Type 11 Armored Recovery Vehicle (ARV), is currently the only variant of the Type 10 Hitomaru. The driver and commander share a single compartment on the left front of the vehicle. On the right is a large heavy-lift boom. The vehicle retains the hydropneumatic suspension, allowing it lower if necessary for ease of vehicle recovery. The vehicle also carries a Browning M2HB .50 cal for personal defense.
Crowds of people had a demonstration of its capabilities at one of the displays at Fuji during which a Type 10 slipped a track during a rapid change of direction and so required the used of the Type 11 to rescue it. 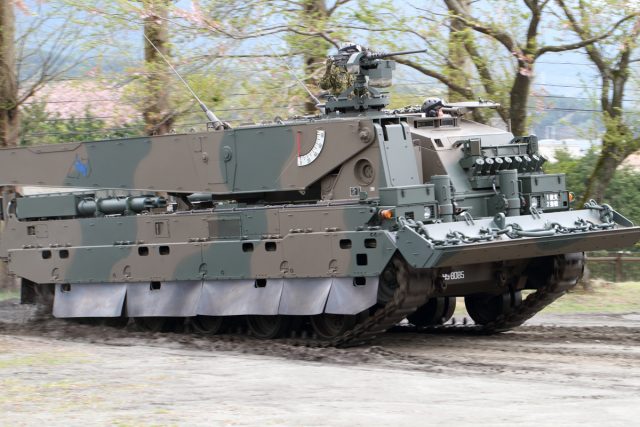 Why build a tank?

It might seem curious that so many countries around the world go through all the trouble of designing and building their own indigenous tank. At a superficial glance, it might seem to be easier and more cost effective to simply buy an already proven design from another country.
However, this is not the case for a lot of countries. Tanks are very expensive high-end products. Building it locally means that all the money invested in the designing and construction stays within the local economy. It pays local people and local companies, which pay taxes to the state, so the money invested in such a military asset eventually return to the government as taxes.
Furthermore, such an investment creates jobs for a significant amount of people, ranging from engineers, scientists, programmers and construction workers. These are positions that require skilled employees, which are vital to the development of most countries.
The construction and designing of a new tank also imply the creation or integration of high-end technologies. However, these can be then also transferred into the civilian economy, leading to the production of more valuable goods. A tank requires a whole suite of different technologies that can then find their way into civilian use, from the suspension to advanced materials used in its construction, electronics, programming, various sensors or the powerful powerpack. Add to that the nationalism of developing and fielding your own tank with secure lines of supply etc. and even with the very high cost of the Type 10 it makes a little more sense.

Video from the 2014 Firepower in Fuji event at the JGSDF’s Guji training ground featuring the Type 10. It is accompanied by Type 89 IFVs and Type 87 SPAAGs.

Type 10 Hitomaru of the 1st Tank Battalion, 1st Division of the Eastern Army.

Type 10 with add-on armour from the 5th Tank Battalion, 5th Brigade of the Northern Army.

These 1/72 scale illustrations were done by Tanks Encyclopedia’s own David Bocquelet.