Throughout WW2 and the post war years various nations built and used flamethrower tanks to devastating effect. These deadly machines were often attached to engineering divisions or other supporting roles. They would strike unbridled terror into enemy infantry or clear garrisoned buildings due to the perceived horror of being caught in a burst of incinerating liquid fire. In some cases just the sight of a flame thrower tank would cause enemy troops to surrender. Czechoslovakian PM-1 Flame Tank 2nd prototype. A turret of an armoured car developed for pre-war Civilian Police and the original projector and pump unit was for water cannon was used at first. (photographer: unknown)
Some of these vehicle types are quite infamous such as the British WW2 Churchill Crocodile tank; a machine so loathed by the Germans that bailed out crews could expect summary executions if they were caught. The smaller WW2 Italian L3 Lf’s (lancia fiamme) is another example; this diminutive tankette, although useless against the mobile armored opponents in North Africa, had nonetheless seen service in several countries prior to that.
Other vehicles are a little rarer and one such tank is the post war Czechoslovakian PM-1 Flamethrower: a machine built on the ST-I chassis, a modified Jagdpanzer 38t, more commonly called the Hetzer. The Cold War PM-1 tank should not be confused with the WW2 German Flammpanzer 38(t). The PM-1 was a unique and deadly machine in its own right and one that thankfully never saw service. This first prototype PM-1 had an enlarged hull on the right side in an attempt to mount fuel and pumps internally. (photographer: unknown)

The project was set down by the Czechoslovak VTU Vojenský Technický Ústav or Military Technical Institute department in 1946 as the Czechs wished to include flamethrowers in their newly formed ranks as assault tanks.
The first proposal was for these weapons to be mounted as a secondary system on variants of the planned TVP medium tanks (The TVP’s or “Tank Všeobecného Použití” was a proposed joint Czechoslovak and Soviet series of vehicles in the 30 ton range influenced by both Russian and German design features). The TVP project never got as far as a production series but the need for a flamethrower vehicle was still present.
With this setback in mind the 1st Department of the Army Chief of Staff looked at the material they had available and set their eyes on the ST-1 Tank destroyer’s currently in service, these were essentially a mix of WW2 vintage Jagdpanzer 38(t)’s, the odd re-worked Starr variant of the former and a few post war examples. Under Czechoslovak service the basic “Hetzer” hull had changed very little, the MG-34 was removed and a few minor cosmetic tweaks were made but otherwise they remained the same.
The design plans were sent to Českomoravská Kolben-Daněk in November 1949 as the CKD had been responsible for making Jagdpanzer 38(t)’s for the Wehrmacht during the war (known under occupation as Böhmisch-Mährische Maschinenfabrik AG(BMM)) and the plant still had the engineers and tools to make the alterations required.
Due to this, the chassis were altered quickly with no major issues. The main 7.5 cm Pak 39 L/48 gun was removed and the subsequent hole was covered with a 50mm plate that was still being cut up from the surplus Panzer wrecks found littering the countryside.
Initial production requests asked for some 75 vehicles to be made with 30 to be ready in 1949 and the rest to be completed by 1950. The Milovice company had refitted seven ST-1 Jagdpanzer 38(t) chassis to a working condition by March 1950 and sent them to be fitted with a turret and flame thrower gun. Only three were used before the project was canceled. The next issue was choosing a suitable flamethrower to be mounted in the PM-1, after all the Hetzer is not vehicle renown for its roomy interior, but unlike the British Crocodiles the designers had no intention of dragging around a large cart behind their tank.
The first domestic flame unit was built to VTU specifications by the Sigma pump n.p. Company and was ready for testing in October 1949, the weapon design was very similar to that mounted on the Sherman Crocodile with a 14-17mm nozzle and a 50 liter fuel tank operating at 50 atmospheres of pressure, the device ultimately was not chosen due to a rather obvious oversight: the Czechoslovaks had plenty of the old NP fuel mix (Nitro phenyl) in stock that needed using up but nothing that would work with the new device at the time, as such an older German flamer was fitted as it made more economic sense.
The first prototype was ready for field testing in February 1951 and had a distinctive conical turret that mounted a German Flammenwerfer 41 and a Vz.37 heavy machine gun. After field trials it was found to be somewhat lacking in expected performance.
Several faults were found: the flame burst could barely get further than 60 meters and was dangerously inaccurate (even for a flamethrower); the toxic fuel was stored in the hull next to the crew an armoured box; it was deemed an unsafe design.
The second prototype emerged 1951 and this time with a traditional if somewhat problematical turret. In place of a custom made turret it was now sporting a modified LT vz.38 – Panzer 38(t) turret with the commander’s cupola sawn off and the vz.37 machine gun replaced by aSoviett 7.62mm DT machine gun that was used on T-34/85.
The Flammenwerfer 41 flame gun was replaced by a new design from the Konstrukta company with an effective range of 120 meters. The LT vz.38 turret’s 37mm gun was removed and the  flamethrower fitted. It used a new mixture of gasoline; and BTEX (Benzene, Toluene, Ethyl benzene, and Xylenes) that was kept in the new armoured box which contained three large tanks totalling some 1000 litres of fuel and propelled by seven smaller tanks of pressurized nitrogen. For safety reasons the fuel for the flame gun was now carried in an armored box attached to the rear of the vehicle.
The third prototype was ready on 31st of March, 1953 and during the tests, the flame jet that was fired from a new modified longer flame gun could reach from 90 meters to 140 meters. Last trials of the PM-1 flame thrower tank took place in March 1956. The flame gun managed to shoot at a maximum range of 125 meters with the Sh mixture and 180 meters with the new ASN mixture.

Its unknown why this vehicle didn’t pass the inspection as it seemed in hindsight to fulfil the requirements however that is based purely on the documents we have today and therefore we may be missing vital information, it will probably never be known.
The third prototype had a reworked fuel supply allowing the flame to project longer distances but complex changes in the pressure hosing resulted in a reloading time of 60 minutes and the lighter mixture was less tacky and more unlikely to stick to its intended target although one suspects this fact offered little in the way of consolation to anybody drenched in litres of liquid fire.
By late 1953 the Minister of Defence Václav Thoř had expressed his doubts about the projects indicating that something new might be needed. The team improved many of the shortcomings like changing the fuel type again to increase the range to 180 meters but it was too little too late and by 1956 the project overseer cancelled all ongoing work.
In the end the mobile flamethrower itself had been perfected but with the Cold War in full swing and a rapid change of battlefield tactics and doctrine taking place there was little use for an old “Hetzer” to keep up with the new fast moving Soviet tank formations. The three prototypes were scrapped later that year and few photos remain.

An article by Ed Francis 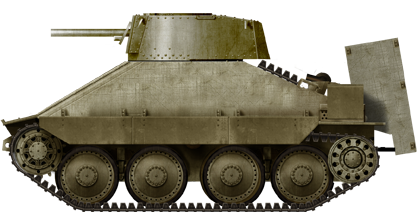 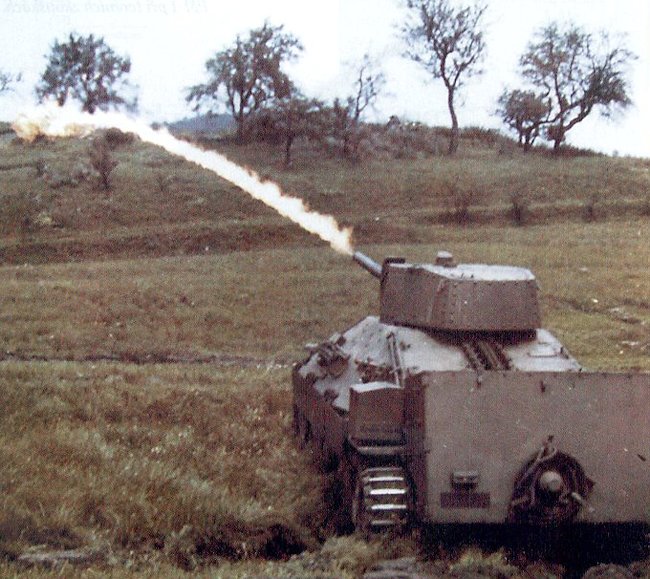 During the last trials the flamethrower managed to shoot as far as 125 meters with the Sh mixture (80 percent gasoline, 20 percent BTEX, made thick by what was essentially a soap production waste) and 180 meters with a new ASN mixture. (photographer: unknown)