The Argentinian Army was founded on May 28, 1810, when the Spanish colonial administration in Buenos Aires was ousted. The core of the new army consisted of the Patricios Infantry Regiments and various militias, hardened and proved in repelling the British invasions of the Río de la Plata in 1807. From 1811 to 1820, José de San Martín launched a military expedition in Upper Peru (now Bolivia), but also Paraguay, Uruguay and Chile to fight Spanish forces and secure the newly gained Argentine Independence. The Argentinian army took part in the famous battle of Chacabuco in 1818.

After a period of civil war in the 1820s, a new constitution was written, creating the Armed Forces. The country knew a period of relative peace until the 1860s, when it was found embroiled in the War of the Triple Alliance. In the 1870s, the Army took part in an expedition in the Patagonian Desert known as the “Conquista del Desierto” against native, extended the Country to its full.

In the 1880-1890s and until the 1930s the Army distanced itself from political affairs while becoming more professional. The most influential foreign country in Argentina was Prussia, and the Prussian army served as an example on which the tactics and doctrine of the XXth century Argentinian Army were modelled. A reason for that was the considerable proportion of German immigrants in the country, which weighted both in economic and political affairs of the time. Although neutral in WW2, the Argentinian Ground Force was mostly influenced and supportive of the Germans, while the Navy was more driven by its admiration for the Royal Navy. Nevertheless, the Army made a coup in 1930, propelling Hipólito Yrigoyen to power, and again in 1943, when Colonel Juan Perón was put at the head of the state.

Despite pressure, the country remained fiercely neutral, although with some marked sympathy for Germany. A good example of this was the Graf Spee affair in December 1939. The German “pocket battleship” had roamed the South Atlantic since the beginning of the war, creating havoc in the shipping lines and sinking significant tonnage before a large “ship hunt” by British and French ships began. Eventually, a squadron of British cruisers (HMS Exeter and two light cruisers) cornered the Graf Spee (battle of River Plate, December 1939). Although the Spee almost sank the three ships, it was itself damaged to the point of requiring repairs and sailed to the Montevideo Harbour. What followed was a diplomatic tragi-comedy which eventually pushed the Argentinian authorities to impose a 72 hours moratory, also dictated by the La Haye convention. This was not sufficient to carry our repairs, whereas British Intelligence created false radio reports of the arrival of capital ships in the vicinity. The rest is history.

After this, external pressure mounted on the Argentinians, in particular from the US after 1941, but the country remained neutral until 1943. President Castillo saw his country stricken by an US-led embargo and blockade due to this neutral position. Disgruntled officers eventually mounted a coup which succeeded in June 1943, propelling Arturo Rawson into power. He started some reforms and decided to break diplomatic relations with Germany, but a new coup saw an obscure Colonel propelled to power, Juan Peron.

The relations with the US improved, Argentina requesting weapons for a possible expeditionary corps, but this never came to fruition. It was at that time that the sole Argentinian domestic tank, the DL.43 Nahuel was built, in very small numbers. Large supplies of US tanks were expected until the end of the war. In 1945, however, Peron agreed to take harsher measures against the Nazis and German assets in Argentina. Therefore the USA eased pressure and restored normal diplomatic relations, as did other countries. Nevertheless, whereas this official position was maintained, some 1,400 Argentines joined the British Forces during the war.

M113 armed with a 20 mm (0.79 in) autocannon. A part of the M113A1/A2s in service were armed this way, providing supplementary IFV capabilities, in addition to the other IFVs in service. 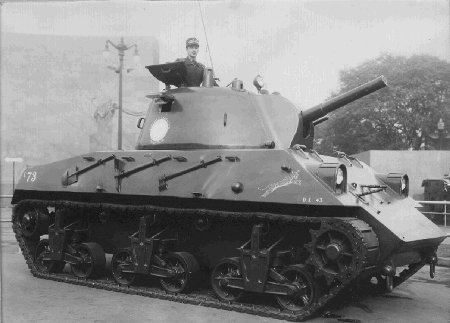 The Nahuel D.L.43 was one of the very rare armored vehicles domestically built in Latin America in the 1940s. The Nahuel looks like the M4 Sherman, but it was not based on the American vehicle, although some components were indeed of American origin. The engine was a locally built W12 Lorraine-Dietrich, the gun was a Krupp M1909 76 mm (3 in) and the whole assembly was performed locally. The design was approved in 1943, but only 12 where produced due to the government deciding to wait in order to buy cheap stockpiled American M4s in 1945. One of the rare mass-produced domestic tanks in Latin America, the TAM (Tanque Mediano Argentino) was largely based on the German Leopard MBT and Marder IFV. And indeed, a great deal of German technology was embedded into the TAM, with 30% of the components being imported from Germany and the rest locally built. About 280 were cranked-up since the 1980s, now being part of a large modernization program from the ELBIT company.

Argentina purchased large numbers of French AMX-13 and Austrian SK-105 Kürassier oscillating turret tanks. In the early 2000s, the Patagon project appeared, marrying the turret of the French AMX-13 to the hull of the Kürassier. An insignificant number of vehicles is rumored to have been built.

The VCTP is the IFV version of the TAM. 123 are currently in service with the Argentine Army. It is armed with a 20 mm (0.79 in) autocannon and can carry 12 men. 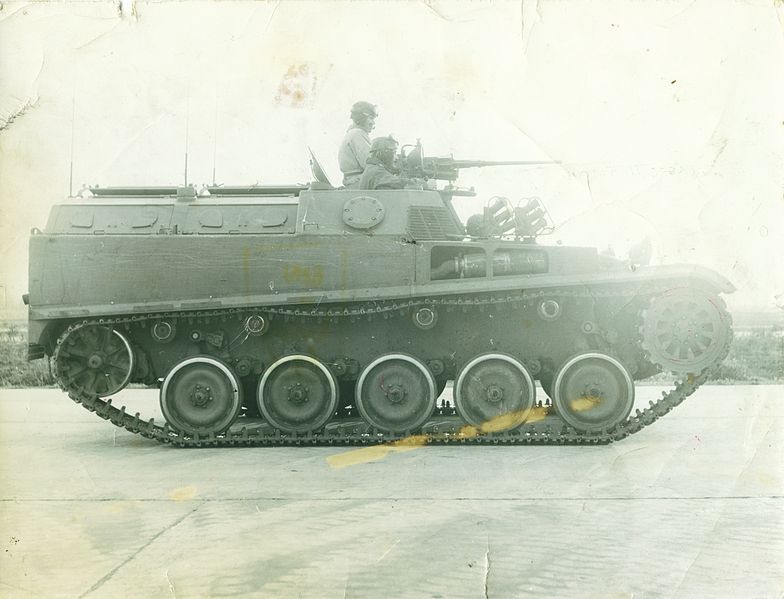 The AMX-VCI is an older tracked APC of French origin sharing many components and chassis with the AMX-13. 28 in service as of today. 20 AMX Mk F3 self propelled guns, armed with a 155 mm howitzer, based on the same chassis, are also still in service. 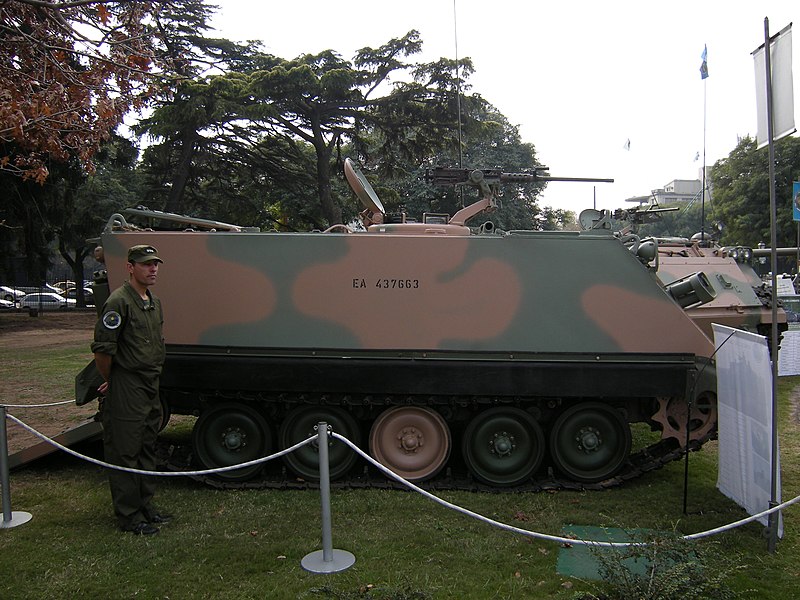 The VCA Palmaria is based on a TAM-derived chassis fitted with an Italian Palmaria turret, with an 155 mm (6.1 in) gun. 17 of these joint Argentine/Italy SPGs are in service. Only one experimental VCLC built. It is armed with an 105 mm (4.13 in) multiple rocket launcher mounted on a VCTAM hull. However another variant, the AM-50 120 mm mortar carrier VCTM, is in service (13 vehicles). 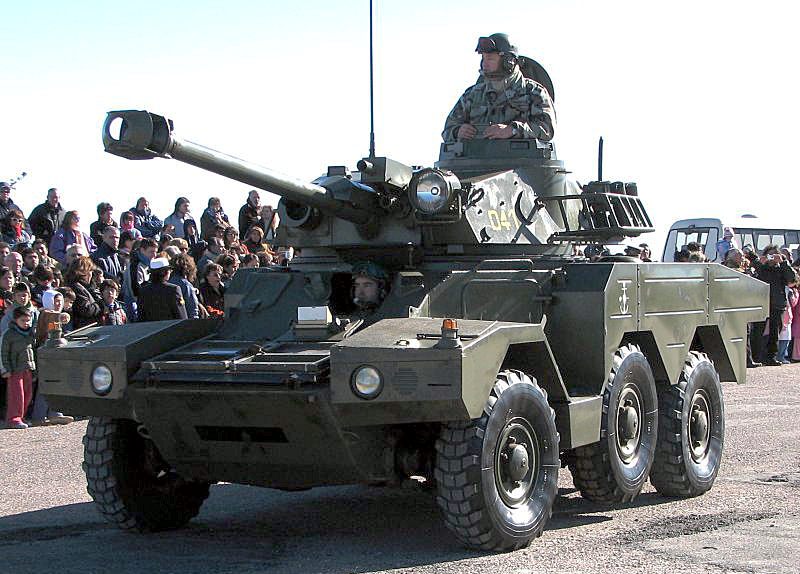 14 French origin ERC-90 Sagaie wheeled vehicles are used by the Argentine Marines. With a high velocity 90 mm (3.54 in) gun and modern FCS they are much more capable than the Panhard AMLs. This light reconnaissance car, which also has an armored version, was developed jointly with Brazil. It entered service with the Argentinian Army in 2011.

Awesome Job, thanks for all the efort you put on this, can you add some more argentinian vehicles please. Greetings from Argentina 😀

Hi Lukas
Thanks for the team,
At least the palmaria, VCLC, the Patagon prototype, and possibly the VLEGA Gaucho although it’s not sure it’s armoured. If you have other ideas, especially for retired cold war AFV, don’t hesitate to enlight us…

Thanks for the answer, and it would be great if you can add the variants of TAM, the VCAmu (amunition carrier) VCTM (Mortair carrier) or the VCDA (Anti aircraft) and VCLC (Rocket launcher) The last two are only prototypes but it would be awesome to see.
Thanks again for the efford put on this job. Cheers

Sure ! Since the basis is already done it should not be very long.
But i think the page completion has priority…
Best,

“Although the Spee almost sank the three ships, it was itself damaged to the point of requiring repairs and sailed to the Montevideo Harbour. What followed was a diplomatic tragi-comedy which eventually pushed the Argentinian authorities to impose a 72 hours moratory, also dictated by the La Haye convention. This was not sufficient to carry our repairs, whereas British Intelligence created false radio reports of the arrival of capital ships in the vicinity. The rest is history.”
314/5000
The events that occurred did not occur in the Argentine territory, but in that of the “Oriental Republic of Uruguay”, especially in the port of its capital city “Montevideo.” Although Argentina and Uruguay share the “Rio de la Plata”, the ship in question was undone from the Uruguayan side of the maritime border. Greetings. https://es.wikipedia.org/wiki/Admiral_Graf_Spee